The 27 Club: These Famous Musicians All Died Tragically At Age 27

Paul Ciampanelli
The 27 Club: These Famous Musicians All Died Tragically At Age 27 April 21, 2017 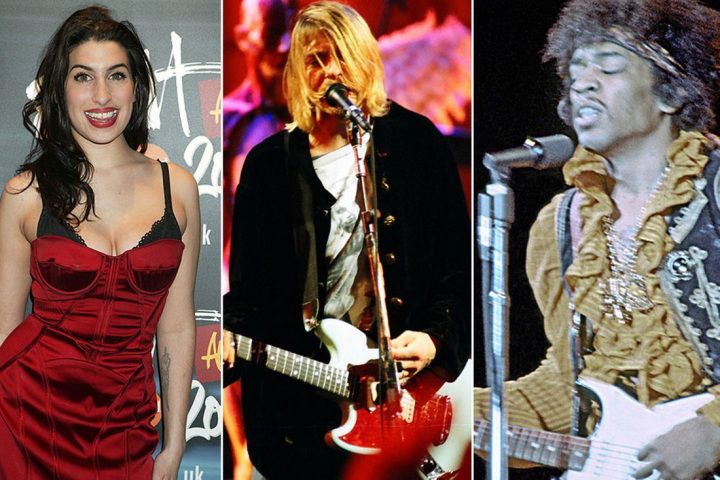 Why do so many musicians die at 27? It's a decades-old mystery that keep growing.

Robert Johnson is a legendary blues guitarist who is considered one of the greatest influences on rock and roll, even though he died before rock and roll was a thing. Johnson’s death is shrouded in mystery. Some say he was poisoned by a jealous husband, while others surmise he died of syphilis. He was 27.

Pete Ham was the lead singer/guitarist for power-pop godfathers Badfinger in the early ‘70s. He wrote and sang such stone-cold classics as "No Matter What," "Day After Day" and "Baby Blue." On April 24, 1975, one month before the birth of his daughter, Ham hanged himself in his garage. He was 27.

Amy Winehouse had a long history of substance abuse. In addition to her drug habits, Winehouse went through periods of abstaining from drinking followed by ferocious benders. Her family believes years of bulimia resulted in a weakened constitution that was a major contributing factor to Winehouse’s death from alcohol poisoning on July 23, 2011. She was 27.

Rudy Lewis was a member of The Drifters, and sang lead on timeless hits like “Up on the Roof” and “On Broadway.” He was supposed to perform lead vocals on “Under the Boardwalk” too, but died on the day the Drifters were scheduled to record it. There was no autopsy, but Lewis’ death was presumed to be from a heroin overdose. He was 27.

Though singer/songwriter Alex Chilton is thought of as Big Star’s leader, his Lennon/McCartney-esque creative partnership with Chris Bell guided the band through its first two cult classic albums. Infighting led to Bell quitting Big Star, rejoining, then quitting again. Sadly, Bell lost control of his car while driving on Dec. 27, 1978, crashed into a pole and died instantly. He was 27.

Surfer Blood guitarist Thomas Fekete was diagnosed in late 2014 with a rare and aggressive form of sarcoma that had by then already spread to his lungs and spine. The cancer forced Fekete to quit Surfer Blood in 2015, and he died on May 31, 2016. His wife, Jess, wrote, "He was the kind-hearted, funny, fearless, magnetic beam of light you all knew him to be up until his very last breath." He was 27.

Brian Jones was an original member of the Rolling Stones, and was considered the band’s leader in its early years. Jones formed the Stones and guided their creative direction, but drug addiction took hold, and Jones’ behavior grew erratic, causing a rift in the group that led to his ouster in 1968. He drowned in his swimming pool on July 3, 1969. He was 27.

D. Boon was the lead singer, guitarist and chief songwriter of seminal San Pedro punk trio the Minutemen in the early ‘80s. While on tour in December 1985, D. Boon was lying down unseatbelted in the back of the Minutemen’s van, sick with a fever. When the van accidentally ran off the road, D. Boon was thrown out the back door, breaking his neck and dying instantly. He was 27.

Alan Wilson was a co-founder of the ‘60s band Canned Heat, and sang on their hits. That’s his signature high tenor on “Going Up the Country” and “On the Road Again.” Though he suffered from depression and had attempted suicide before, the drug overdose that killed him was ruled accidental. Wilson died on Sept. 3, 1970. He was 27.

Pete de Freitas joined post-punk stalwarts Echo and the Bunnymen just as they were releasing their debut album in 1980. He remained on the stool through the band’s ‘80s heyday (but for a leave of absence between the “Ocean Rain” and self-titled albums) before dying tragically in a motorcycle crash on June 14, 1989. He was 27.

One of the most famous members of the 27 Club, Jimi Hendrix is widely considered the best rock-and-roll guitar player ever, and one of the most influential figures in the genre’s history. Hendrix took nine prescription sleeping pills before passing out in bed on Sept. 18, 1970. He drowned in his own vomit during the night, and his girlfriend found him dead the next morning. He was 27.

At the height of grunge in the early ‘90s, a band called The Gits was a key part of the Seattle music scene, and Mia Zapata was their magnetic singer. Sadly, while Zapata was walking home late at night on July 7, 1993, an assailant beat, strangled, raped and murdered her. She was 27.

A blues singer with some of the most powerful and affecting pipes rock and roll has ever seen, Janis Joplin was a key member of the pop counter-culture in the late ‘60s. Half self-conscious and painfully shy, half firebrand party monster, Joplin’s excesses caught up with her when she died of a heroin overdose on Oct. 4, 1970. She was 27.

When rock musicians Alan Wilson, Jimi Hendrix, Janis Joplin and Jim Morrison all died within a year, all aged 27, the coincidence was noted. But it wasn’t until Nirvana frontman Kurt Cobain died in 1994 that the idea of the “27 Club” really blossomed. Cobain, of course, shot himself at home in Seattle, Washington. He was 27.

The lead singer of the Doors was known for his Nietzsche-obsessed hedonism, which is a pretentious way of saying he was a whiskey drunk who read philosophy and fancied himself a poet. Morrison died in a bathtub in Paris on July 3, 1971. The official cause of death was heart failure. He was 27.

Kristen Pfaff was Hole’s bass player during its commercial breakthrough. Pfaff played on Hole’s debut album, “Pretty on the Inside,” as well as its major-label debut, “Live Through This.” But on June 16, 1994, two months after the release of “Live Through This” and just as Hole was becoming a sensation, Pfaff overdosed on heroin and died in her apartment. She was 27.

Manic Street Preachers guitarist Richey Edwards is a unique member of the 27 Club in that his death has never been confirmed. In 1995, his car was found abandoned by the side of the road near the Severn Bridge between England and Wales. Some say he jumped, but those who knew him insist Edwards was never suicidal. He was declared dead in 2008, 13 years after his disappearance. Maybe he’s living in hiding somewhere, but no one’s seen Richey Edwards since Feb. 1, 1995, when he was 27.

Pigpen was a founding member of the Grateful Dead. Unlike the rest of the band, Pigpen didn’t do a lot of drugs. There was no room in his life for drugs because of how much he loved booze. That, in combination with a congenital liver disorder, meant his liver was already pretty destroyed by his mid-20s, and he had to quit touring. Pigpen died of a gastrointestinal hemorrhage on March 8, 1973. He was 27.

Iggy Pop’s group the Stooges were the best band ever, and Dave Alexander was their kickass bass player. Sadly, Alexander’s heavy drinking led to a bout of pancreatitis. While in the hospital, he developed pulmonary edema, and that killed him on Feb. 10, 1975. He was 27.

In the early ‘90s, Digital Underground-affiliated rappers Tupac Shakur and Stretch were inseparable best friends and sometime collaborators. But the friendship deteriorated in the months following Tupac’s imprisonment in early 1995. On Nov. 30, 1995, Stretch was murdered in a drive-by shooting. He was 27.