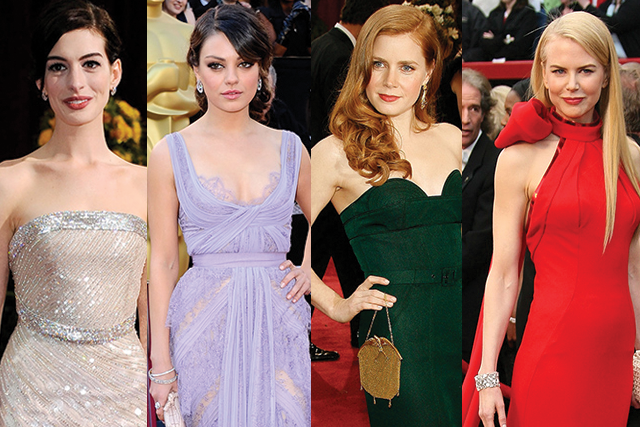 From Charlize Theron to Jennifer Lawrence, this is Oscar royalty.

Halle Berry's burgundy Elie Saab gown and its sheer top with strategically placed floral embroidery made waves, much like her emotional acceptance speech for being the first African-American actress to win the award.

Kate Hudson blew everyone away in this blush-colored Versace gown, which reportedly took 500 hours to make.

The statuesque Charlize Theron won her Best Actress Oscar looking nothing like the woman she portrayed in Monster. Rather, she channeled the most glamorous of Old Hollywood sirens with her backless, beaded Gucci gown and a perfect wavy 'do.

What's a best-dressed list without this queen? Although she could have made it with a number of looks, Cate Blanchett was unforgettable as she carried herself in this yellow Valentino gown. It was all old-school Hollywood glamour as she took the Best Supporting Actress Oscar home.

Hilary Swank's long-sleeved and high-necked number turned out to be one of the most surprisingly sexy dresses in Academy Awards history with its daring low-cut in the back. She won the Best Actress Oscar for Million Dollar Baby that year in this navy Guy Laroche gown.

Reese Witherspoon was a vision when she accepted her Best Actress Award for Walk the Line in this 1955 vintage and brilliantly detailed Christian Dior stunner.

Michelle Williams turned every single head on the carpet when she walked in donning this mustard-yellow, pleated, and frilled Vera Wang frock paired with bold red lipstick against her delicate skin.

Jessica Alba looked like an Oscar with her beautifully detailed gold Versace gown.

Even though she lost out on an Oscar in 2007, Penélope Cruz made sure she still held all the attention in her feathered blush Atelier Versace frock.

The archetype for Redhead Wears Green. There was no better actress to wear the emerald Proenza Schouler strapless mermaid gown.

The French actress dropped jaws as she accepted her award forLa Vie en Rose in this custom-designed and hand-embroidered scaled mermaid dress.

Anne Hathaway looked like a million bucks as she slinked across the red carpet in this shiny and strapless Giorgio Armani Prive piece, which fit her like a second skin.

Even on an all-time best-dressed list, Freida Pinto still stands out with her electrifying, one-shoulder, one-sleeved blue Dior gown.

Sandra Bullock had been stepping up her fashion game the entire awards season to culminate with this elegant silver beaded Marchesa gown as she won the Best Actress prize for The Blind Side.

The then little-known Jennifer Lawrence, up for an Oscar for the indie film Winter's Bone, made sure everybody knew her name by the end of the night with her perfectly fit, red-hot Calvin Klein number.

Mila Kunis was sexy yet demure in this delicate lilac and lace Elie Saab concoction, which was draped in all the right places.

Gwyneth Paltrow made everyone stare in her white caped Tom Ford column dress.

Another actress who seldom makes a misstep in the world of fashion, Naomi Watts totally stunned in this eye-catching Armani Prive sequined gown with a playful shoulder cutout.

Kerry Washington woke up everyone in the room with her bright coral Miu Miu gown, which she allowed to shine with her understated hair and makeup.

Did someone say Cinderella? Lupita Nyong'o looked like she walked straight out of a fairytale as she accepted her Oscar for 12 Years a Slave in an ethereal, powder blue Prada gown.