Camila Villafane
The Best “Real Housewives” Quotes That Will Help You Shut Anyone Up April 3, 2018 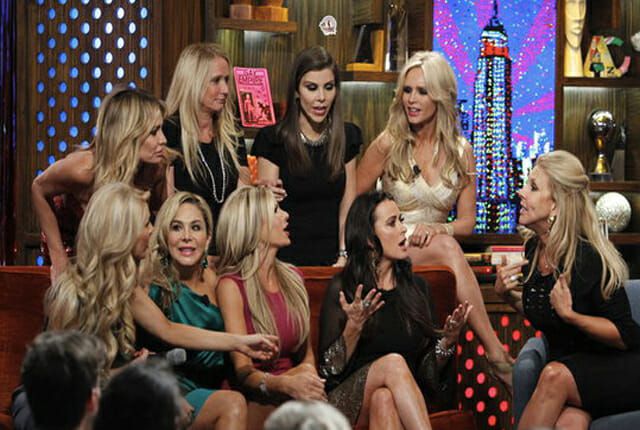 The Best Real Housewives Quotes That Will Literally Give You Life

If you're a fan of the Real Housewives franchise, you probably can't help incorporating your favorite Housewives personality traits into your own personality. I mean, it's not like you'll be able to mimic the Real Housewives lavish lifestyle.  Absolutely not way. Because you're broke AF. (It's OK to admit it.) At least can always find a little inspiration from their sassiness with the funniest and most memorable quotes they blurted over the years. But since there are so many, we broke some of the very best Real Housewives quotes down for you.

If you ever need dieting advice, don't ask this "Real Housewives of Atlanta" star for it. "I want cheese ravioli, salad with house dressing, no tomato, that cannoli filling... and a diet coke," said Zolciak-Biermann. Given how many carbs are in cheese ravioli and cannoli filling, you might as well go for regular Coke while recovering at the hospital.

Never let it be said that the "The Real Housewives of Atlanta" star never pays anyone any compliments, because she totally made a stripper's day when she took a closer look at a dancer's tw*t and noticed how awesome her wax job was. "You are shaved up so pretty," said Parks.

There aren't a lot of women who would freely admit to being a size 10, but "The Real Housewives of Atlanta" star is the exception. "I'm a size 10. I could be a size 8 if I wanted to, but I'm effin' hungry." Of course, we know that she was just saying what we're all too afraid to say out loud when someone body shames us.

Dina Manzo was quoted saying that "I don't know if she wants to be me, or skin me and wear me like last year's Versace" when talking about her "Real Housewives of New Jersey" co-star, Danielle Staub. But Staub wasn't interested in her skin, but she did try to get Manzo's kids taken away from her.

"The Real Housewives of New York City" star watched her co-star Alex McCord walking down some steps in Morocco. They sat down to have a chat, when Luann infamously said to her "You came in, in your Herman Munster shoes...", to which she replied, "Um, they're Louis Vuitton shoes." What Luann told her next is worth tattooing on skin, "Well, you know, even Louis Vuitton makes mistakes." Burn!

On "The Real Housewives of Beverly Hills," psychic Allison Dubois said, "Your husband will never emotionally fulfill you. Ever." The odd thing about Dubois prediction was that everything she had warned Kyle Richards about, should have gone to Camille Grammer, who ended up divorcing her man in 2011.

When "The Real Housewives of Atlanta" star Kim Zociak-Biermann made reference as to why her daughter, Ariana loved boys so much, she shocked viewers by saying, "I love boys. I came out of the womb looking for dick." Hey, what can we say about our girl. She loves keeping it real.

Phaedra Parks Is a Jacuzzi Hater

Parks, who joined "The Real Housewives of Atlanta" in 2010, and was married to Apollo Nida until 2017, made reference to "bacterial vaginosis" in this infamous quote because she had a serious phobia of getting into the Jacuzzi. You see, she just wasn't sure which one of her co-stars had used it and didn't want to catch anything. Well played Parks. Well played.

"The Real Housewives of Beverly Hills" star Faye Resnick made quite a scene when she verbally attacked Brandi Glanville, who's her BFF, Kyle Richard's enemy. Resnick said "No matter how many Chanels you borrow, you will never, ever be a lady." Hitting right where it hurts: on your love for high fashion.

Caroline Manzo Means What She Says

There'll never be a misunderstanding with this "Real Housewives of New Jersey" star. "When I called you garbage, I meant that you were garbage," is what she told her fellow "Housewives" star, Danielle Staub. And her hatred for Staub might have something to do with the fact that the latter tried taking her sister, Caroline's kids away.

Kim Zolciak Prayed To Her Wig

Fans laughed their a**es off when "The Real Housewives of Atlanta" star said, "Dear God, please keep my wig on." Of course, she should have prayed for NeNe Leakes to go away after Leakes called Zolciack-Biermann's daughter Brielle racist trash after the 20-year-old posted a video which alleged that Leakes had bugs in her home.

"The Real Housewives of Beverly Hills" star is known for some of the best "Real Housewives" quotes ever, but her coolest line was when she said "I'm passionate about dogs, just not crazy about bitches." It not only expressed her adoration and commitment for pooches, but her dislike for some of her cast members.

"The Real Housewives of Orange County," is married to Terry Dubrow, a plastic surgeon and co-host of the series "Botched" which deals with cosmetic surgeries gone wrong. But Dubrow isn't worried about ever appearing on her hubby's show because: "I may be married to a plastic surgeon, but I'm 98 percent real." YES, SISTER!

Briana Culberson And Her Mom's Ex

"He told me that his nickname was Girth Brooks," said "The Real Housewives of Orange County" star. Apparently, this was the nickname that Brooks Ayers, her mom's ex-boyfriend called his c*ck. He also allegedly hit on her while she was pregnant and faked the fact that he was undergoing treatment for cancer. What a catch!

"The Real Housewives of Atlanta" star was at it again. Only this time she seemed to have a beef with her fellow co-star Kim Zolciak-Biermann, who got shunned away by NeNe's frantic handwaving and witty remark about the elaborate hair pieces she's donned on the show over the course of the series.

Peggy Tanous Is Not Your Typical Mom

In season 6, "The Real Housewives of Orange County" star was quoted as saying "Soccer moms drive mini vans, but this girl drives a Bentley." So given that she has two kids, we can only assume that they either don't play soccer, or she loves to make the other moms jealous by showing up in her Bentley.

"The Real Housewives of New Jersey" stars Teresa Giudice and Danielle Staub feuded because Giudice claimed that Staub was being fed poison by co-stars Caroline Manzo and Jacqueline Laurita. So, when Giudice called Staub "honey" she didn't like it, so Giudice asked "Is b*tch better?" Best "Real Housewives" quote ever!

In season 7 of "The Real Housewives of Orange County," star Gretchen Rossi accused her "friend" Alexis Bellino of being "pretentious" and Bellino held a grudge ever since. That probably explains why she was quoted saying this about Rossi: "I wish Gretchen would eat some of her own makeup so she could become pretty on the inside again."

"The Real Housewives of Dallas" star may have been born and raised in Oklahoma, but she moved to Dallas to live with her husband, Travis, and their two boys. But while she's passionate about helping charities, she reminded us how rich she is when she said, "I'm the girl next door... if you live in a big ol' mansion."

When you get into a fight with the "The Real Housewives of Atlanta" star, like co-star Kenya Moore did, don't bother apologizing. You'll be wasting your time, which Leakes proved when she was quoted saying this: "I do have two ears, so what she says can politely come through one and go right out the other."

For eight seasons, "Real Housewives of Atlanta" star NeNe Leakes would always throw it in people's faces that she was loaded, and fans never got tired of hearing her shout "I am a very rich bitch," cause that's how this "sista" won an argument against anyone who dared to cross her, like her co-star Sheree Whitfield.

Joyce Giraud Is Too Opinionated

Giraud joined "The Real Housewives of Beverly Hills" in season 4, said "You can never be too young, too thin, or too honest." Then again, she can say that because the Puerto Rican model-turned reality star was second runner-up in the Miss Universe 1998 pageant and participated and won in a bunch of other pageants. So jelly!