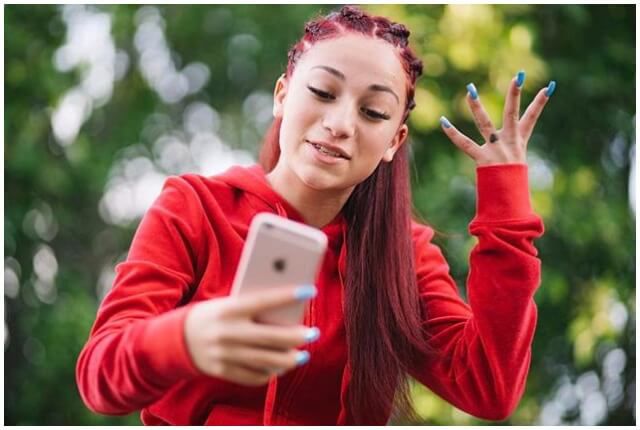 The Cash Me Ousside Girl's hilarious reactions to fan art will have you laughing harder than her Dr. Phil appearances. When it comes to Danielle "Bhad Bhabie" Bregoli, there is no filter between what she thinks and what she says, regardless of what her fans want to hear. So check out this collection of the rapper's off-the-cuff, explicit  reactions to fans "doing her dirty" with their drawings.

Bhad Bhabie would dig this fan drawing...if the artist changed literally every aspect of it. "If you could have made it look like me and not like...that...then it would have been great," she said. Boom. Roasted.

Bhad Bhabie absolutely tore into this "Draw My Life" piece of fan art. "It looks like I was addicted to heroin for seven years. You're a f---ing idiot, because this sucks," she said.

Bhad Bhabie WOULD totally like this...but she "looks like she's on crack," so this piece of fan art was only given a 6 out of 10 on the rapper's YouTube channel. It takes a lot to impress the young queen of new-wave rap, OK?

14-year-old rapper or 49-year-old "My Heart Will Go On" singer? Bhad Bhabie tore into this piece of fan art by stating, "That looks like someone tried to draw Celine Dion and they f---ed up. They f---ed up."

This piece of fan art nearly left Bhad Bhabie speechless. "We're gonna pay for you to get some art classes," said the rapper, slipping in the ultimate sneak diss.

The Ugliest Picture She's Ever Seen

Ouch. Bhad Bhabie went all out for this one, calling it the "ugliest f---ing picture she's ever seen in her f---ing life." She also has some questions that need answers: Why does she have wet stains on her shirt? Why is one eye bigger than the other? Why are her lips really bad?

Captain Hook, Is That You?

"This is just bad," said Bhad Bhabie in a fan art reaction video that currently boasts over 4 million views. "This is really bad," she said. "I don't know why I have Captain Hook hands? I don't like this."

"Why am I swimming in a pool of dirty water and why is my hand covering my crotch? I look like Big Ang," said Bhad Bhabie in a YouTube video dedicated to roasting a collection of fan art. "The nose is all types of f---ed up," she continued, never one to sleep on fans who do her dirty (literally).

This Bhad Bhabie fan DEFINITELY got it twisted when she said she thought the rapper liked her drawing. "I don't [like it] I look like an alien," tweeted the "Hi Bich" hitmaker.

Bhad Bhabie is SICK of lookin' like she slings square hamburger patties, OK? "Looks more like the bitch from the wendys sign if she got possessed by the devil," wrote the rapper in response to this fan's tweet.

Adam Sandler, Is That You?

"Looks like Adam Sandler in a red wig. Love that you tried tho," tweeted Bhad Bhabie in response to this cross-eyed piece of fan art. Tbh, she's kind of right on the money with this one.

Bhad Bhabie's on top because she says what everyone is thinking, and her response to this piece of fan art is no exception. "Damn bitch, why you make my nose so big," wrote the rapper in a tweet dripping with sarcasm.

This mega-fan desperate for "Dani" to see her drawing was undoubtedly let down by the rapper's response. "Looks like your dog peed on it," tweeted Bhad Bhabie.

Bhad Bhabie isn't one to tip toe around a smackdown. When a fan tweeted this drawing with the disclaimer that his "dyslexic friend did it," the rapper responded with a painfully brutal observation: "What does dyslexia have to do with drawing shitty?"

Bhad Bhabie wasn't playing around with this one. The rapper went straight for the jugular when pointing out her comically long eyelashes, tweeting that it looks like she has "spiders on her eyes."

The Sweet But Sneak Diss

At least this fan knew what to expect when she tweeted her straws-for-fingers drawing to Bhad Bhabie. Sending the fan art with the disclaimer that she's "bad at drawing," the rapper responded with a sweet but savage takedown in "Yes, you are." Ouch.

If you're going to ask for Bhad Bhabie's opinion, you better make sure that your work is flawless. Unfortunately for this fan, her less-than-perfect depiction was roasted by the queen bich herself when she said that "It looks like you put me a wax me in the microwave for four minutes."

Bhad Bhabie isn't here to be lookin' like a fast food mascot, and she made sure to tell the "artist" behind this peice of fan art that she's definitely not a down with it. "Why y'all keep drawing the Wendy's bich?!," she wrote in repsonse to the tweet.

Cash Me As A Cartoon

Bhad Bhabie can't just say she "likes" something, that's far too mainstream and basic. Instead, when she sees a piece of fan art that ISN'T terrible, she responds that she "F--- WITH DIS HEAVILY."

When Bhad Bhabie told the fan that tweeted this questionable drawing that it was fire, and you could practically see the sarcasm dripping off of her screen. " 🔥🔥 i like how u added the see thru gucci off white neck brace," she wrote. Ouch.