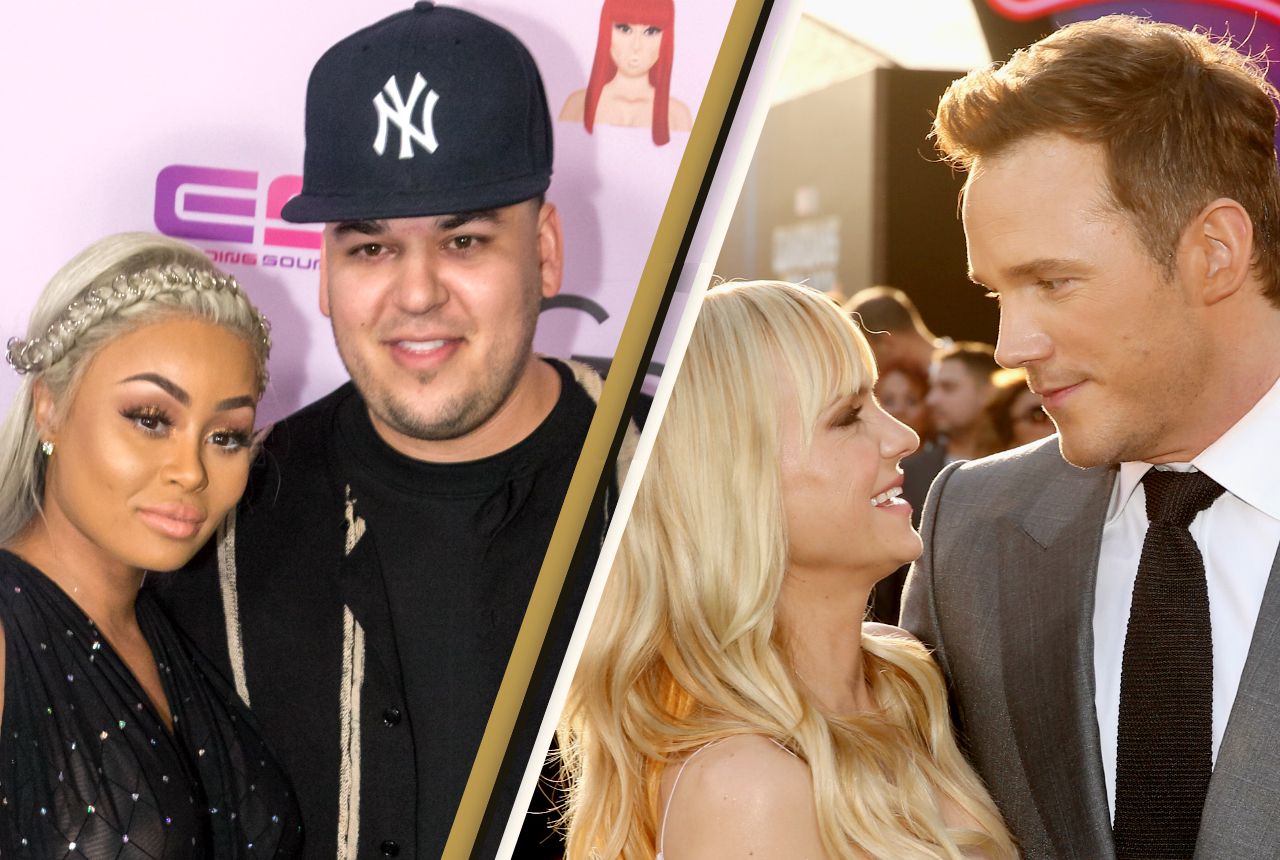 No one dates down. There's no question that nearly everyone in Hollywood comes from the better half of the gene pool. But it's no secret that some celebrities rank higher on the "hot or not" scale than others. And people in the entertainment industry often choose to date among their A-list peers. Yet it's a matter of time before a celebrity links up with a partner who's way out of their league. So from Katy Perry getting the boot from Russell Brand to Calvin Harris kicking Taylor Swift to the curb, these celebrities who dumped hot partners definitely regret their decision.

Oh Aaron Carter, what were you THINKING? Thinking that his status as an up-and-coming pop star would last forever, the younger Carter brother kicked Hilary Duff to the curb to link up with then-Disney starlet Lindsay Lohan. Now, Carter keeps busy by making his ex "uncomfortable" by admitting that he still thinks about her, 10 years later. Talk about regret.

[dx_custom_adunit desktop_id="RTK_K67O" mobile_id="RTK_5yk0"] Someone needs to swoop in and give pop star Justin Bieber an intervention for letting Selena Gomez slip through his fingers...AGAIN. Sadly for Bieber, his history of infidelity and bad boy party behavior came back to bite him and the on-again, off-again relationship with his super famous girlfriend finally came to an end (for good). Sorry, Biebs.

Miley Cryus' split from Liam Hemsworth was so tragic, she gifted the world with the iconic breakup anthem "Wrecking Ball." Certainly, Cyrus is attractive in her own right but she doesn't hold a candle to Hemsworth's impossible jawline and impressive facial hair.  Thankfully for Cyrus, the duo reunited and are now stronger than ever.

For singer-songwriter Lorde, inner beauty is much more important than conventional, physical attraction in a parter. After hooking up with photographer and fellow New Zealand native James Lowe (a man once deemed "too ugly" for the star by the Twitterverse) the duo called it quits after nearly three years of dating. Unfortunately for Lowe, it looks like he won't be so lucky in his future romantic pursuits.

[dx_custom_adunit desktop_id="RTK_K67O" mobile_id="RTK_5yk0"] I'm guessing that right about now, Nick Lachey is kicking himself for not holding on to his hot, young, rich wife Jessica Simpson when he had the chance. Losing Simpson just three years after they first wed, Lachey skipped off with a cool $12 million before forever fading into the obscurity of her shadow.

After "That's 70s Show Ended," Wilmer Valderrama has struggled to remain relevant. The one thing keeping him in the spotlight was his on-again, off-again relationship with gorgeous pop star Demi Lovato but sadly, he lost that just as swiftly as he lost his position as a certified celebrity. It's time to date on your level, Valderrama.

That crustache really isn't doing anything for former tennis player Ryan Sweeting. Hitting the lottery by linking up with "The Big Bang Theory" star Kaley Kuoco, Sweeting soon lost it all after he called it quits on his 21-month marriage to the blonde-haired beauty.

[dx_custom_adunit desktop_id="RTK_K67O" mobile_id="RTK_5yk0"] Country star Miranda Lambert DEFINITELY experienced a glow-up during her short marriage to Blake Shelton. However, the "I'll Name The Dogs" singer seemed unable to hold onto his newly-hot wife and filed for divorce from Lambert after just four years of marriage, citing their demanding schedules as the reason behind the split.

A relatively unknown television actor boasting only slightly above-average looks, Taylor Kinney hit the jackpot when pop star and fashion icon Lady Gaga accepted his proposal. Unfortunatley for Kinney, his appeal wasn't enough to keep Mother Monster hooked for good and the two called off their engagement and went their separate ways.

Reality star Khloe Kardashian pulled the plug on her marriage with Lamar Odom for his rampant infidelity and now, the NBA star is kicking himself for not fighting harder to save his realtionship with his (now) smokin-hot wife. Noting Kardashian's serious glow-up, Odom reached out to say he's down to get back together with her...any time, any day.

[dx_custom_adunit desktop_id="RTK_K67O" mobile_id="RTK_5yk0"] When Anna Faris first linked up with Chris Pratt, he was the chubby, funny television actor with an infectious laugh and easygoing personality. Now that he's a super-buff A-list celeb starring in major blockbuster films, I'm certain that Faris is pining for the days when she was still Mrs. Pratt.

With his salt-and-pepper beard and killer hairline, Josh Duhamel is undeniably classically attractive while his ex-wife Fergie is NOT. Unfortunately for the "Fergalicious" star, her good fortune in the romance department came to an end after she pulled the plug on their eight year marriage.

While definitely a celebrity in her own right, Sarah Silverman is known more for her one-liners than she is for her looks. Punching above her weight, Silverman linked up with "Masters of Sex" star Michael Sheen before calling it quits on their romance due to the pressures of maintaining a long-distance relationship.

[dx_custom_adunit desktop_id="RTK_K67O" mobile_id="RTK_5yk0"] It's no secret that Channing Tatum has a bangin' body with a six-pack to die for. However, that's pretty much all that the "Magic Mike" actor has going for him in the looks department. Without question, Tatum will regret splitting from his super hot wife Jenna Dewan after nine years of marriage.

Despite the fact that his ex-fiance and baby mama Blac Chyna allegedly cheated on him, Rob Kardashian definitely regrets his decision to leave his smokin'-hot former flame. "He has high hopes, despite everything they've been through," said a source close to the reality star and sock designer.

Adam Levine may sing about being a nice guy, but IRL he's anything but. The Maroon 5 frontman surprisingly informed his SUPERMODEL gf Nina Agdal about his sudden engagement to now-wife Behati Prinsloo via text message. To add insult to injury, Levine broke up with Agdal by completely ghosting her and going MIA. Ouch.

[dx_custom_adunit desktop_id="RTK_K67O" mobile_id="RTK_5yk0"] Even after marrying an A-lister 16 years her junior, actress Demi Moore couldn't stand by and let Ashton Kutcher openly cheat on her. Unable to stomach her hot hubby creepin' on her on the low, Moore called it quits and pulled the plug on their six-year union.

Ah, #Bennifer...how we miss thee. With Ben Affleck's universally ridiculed back tattoo to his boy-next-door good looks, there's no doubt that he scored a win with former fiance Jennifer Lopez. However, the "Gone Girl" star tore Lopez's heart "out of her chest" by calling of their engagement just weeks after he slipped a 6.1 carat pink diamond ring on her finger.

Tbh, I'm surprised that Russell Brand has a career, let alone an ex-wife. Somehow, the British comedian lured pop star Katy Perry into marriage before letting her know that he was filing for divorce via TEXT message. "This isn't because of me; this is beyond me. So, I have moved on from that," said Perry of their split.

[dx_custom_adunit desktop_id="RTK_K67O" mobile_id="RTK_5yk0"] While Calvin Harris is definitely hot in his own right, there's no doubt that he dated above his profile and pay grade when he linked up with resident princess of pop Taylor Swift. Salty about splitting with his tall, blonde GF, Harris turned petty AF after their breakup and even went on a Twitter tirade against his ex.