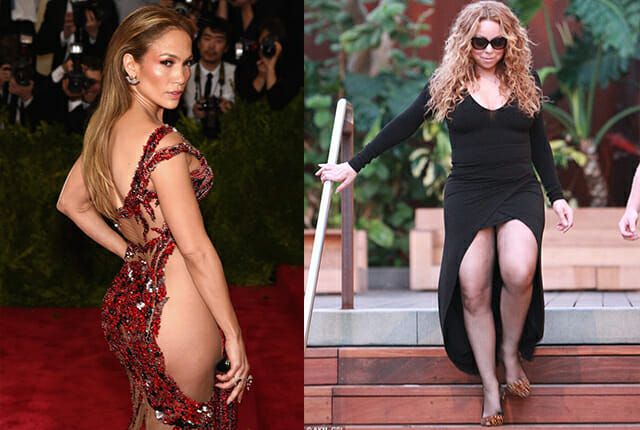 Many of us insure our health, our cars, our motorcycles or our property. But famous people (our betters) also insure other things. Like the sexiest parts of their bodies. Some of these celebrities who insured body parts for insane amounts of cash were only looking to protect their money makers. And we're talking about millions. Even, in one case, billions. And that's just to protect their "personal assets," if you know what I mean. Because for these talented celebs, certain body parts are the true bread winners. And they'd be lost without them.

There would be a lot of reasons for Jennifer Lopez, who allegedly insured her booty for $27 million, to do it. But in 2016, she went on the James Corden show to say that this was just a cheeky rumor, and that she has not, and would never insure her naturally well-rounded booty. Hmmm.

[dx_custom_adunit desktop_id="RTK_K67O" mobile_id="RTK_5yk0"] The KISS singer looked like her had a gigantic cow tongue grafted to his own tongue. So, naturally, sticking his tongue out became a signature move, so he reportedly insured his tongue for $1 million. To this day, fans look forward to seeing the frontman wagging his tongue like a dog.

The retired professional soccer player needed to make sure that his precious legs, feet and 10 toes were insured, so he took out a $195 million insurance policy. Since he also models, he couldn't risk his sexy legs getting all f*cked up and bruised.

The Samoan NFL player for the Pittsburgh Steelers didn't insure his legs, but as the frontman for the shampoo brand, "Head and Shoulders," Polamalu had to insure his curly hair for a whopping $1 million. That's a lot of cash for a mane that's always kept hidden under a helmet.

[dx_custom_adunit desktop_id="RTK_K67O" mobile_id="RTK_5yk0"] UK singer Tom Jones isn't just popular because of his voice. He's also a bit hit because of his chest hair. So rumor has it that he allegedly insured it for $7 million. But guess what pussycat? According to Tom Jones himself, he has never tried insuring his chest hair. Do you believe him?

The singer will totally be able to sing "Dancing in the Dark" for years to come, but if he can't, he won't lose much sleep over it. His voice has been insured with Lloyds of London for a reported $6 million. Bet a part of him hopes his voice will give out so he can collect.

The "Superstore," actress had fake ugly teeth when she starred in "Ugly Betty." But to avoid the same fate, Ferrera allegedly protected her smile with a $10 million mouth insurance, which includes her teeth, gums, and smile through Lloyd's of London, the world's biggest insurance company.

In 2001, the "Project Runway" host, and former Victoria's Secret model told Vogue that she insured her legs for approximately $2 million. But her left leg isn't as pricey since she fell on a piece of glass that left a barely noticeable scar on it. No, really!

The classic Hollywood film actress was afraid that if she gained any weight, her career would be over. So, to prevent that, Davis went full on diva and insured her waistline for $28,000, which today, is barely worth a minimum annual salary, but in those days, it was a lot of cash.

The "James Bond" actor had two zeros in front of his 7, but lots of zeros behind the number 9! Craig allegedly chose to do all of his own stunts for "Casino Royale," but took out a $9.5 million insurance policy on his entire body, just in case. Well played Mr. Bond, well played!

[dx_custom_adunit desktop_id="RTK_K67O" mobile_id="RTK_5yk0"] We all fell in love with the "Erin Brockovich" star's amazing million dollar smile. But guess what? It's worth 30 million allegedly after she had her smile insured so that her dazzling smile would continue to do just that... dazzle. Who said you can't put a price on a smile?

The English musician who founded the rock band, "The Rolling Stones," either needs his middle finger to play the guitar, or he loves flipping the bird a lot because the f*cker reportedly insured his for $1,600,000. Maybe he's hoping someone will hack it off so he can collect. I mean, I'd do it!

The country singer, and actress, owes a lot of her success to her talent, and also her boobs. She's not shy about admitting that the key to looking great is through plastic surgery. But just in case, she reportedly insured her breasts for $6 million in case they go haywire.

[dx_custom_adunit desktop_id="RTK_K67O" mobile_id="RTK_5yk0"] The model, and television personality of her own reality series, "Holly's World," allegedly insured her boob implants for $1 million. It was the only way to supposedly cover her frontal assets. But it's kind of ironic that her ex-boyfriend, Hugh Hefner was the one who ended up t*ts up.

Our beloved Barbadian singer, Riri could have insured her voice, but instead she went for her legs for a whopping $1 million. In fact, she told People magazine that her "legs are my main focus. I'm obsessed." But we're obsessed with Riri from head to toe, baby!

The seemingly ageless Queen of Pop who started out in the 80s and continues to be a big hit today, allegedly insured her breasts for $2 million. Guess she was afraid that the pointy bra she once wore could hurt her honkers if she ever slipped and fell face forward on stage.

[dx_custom_adunit desktop_id="RTK_K67O" mobile_id="RTK_5yk0"] The "Halloween" and "True Lies" actress, reportedly insured her legs for $2.8 million. Then again, you can't blame her. She certainly needs her legs to run away from the supernatural psycho, Michael Myers. She should have insured her back, in case she gets stabbed.

She's the legendary rock singer with the wacky hair. But when it came to her legs, which were allegedly insured for $3.2 million, love didn't have anything to do with it. In 2009, cops arrested the singer for allegedly trying to burn her legs down to get the insurance money. That's true commitment.

The Australian singer's butt gets a lot of attention on stage and on the cover of magazines like GQ Italy. So she has reportedly insured her fine, sexy a** for $5 million. But when you flaunt your cheeky side at the beach as much as she does, you don't want a dog biting into it.

[dx_custom_adunit desktop_id="RTK_K67O" mobile_id="RTK_5yk0"] The Irish-American dancer known for dance shows like "Lord of the Dance," and "Feet of Flames," went out on a limb (ha!) and insured his legs for an alleged $40 million. Then again, his legs are his bread winner. It's no fun dancing with no feet, which he totally needs to avoid the soup kitchen.

Of all the celebrities who insured body parts, soccer players definitely kind of have to. The Portuguese soccer player is as famous as David Beckham, and he certainly needs his legs in order to hit the ball and run around in the court. So, he insured his legs for $144 million.

The singer may use her voice to sing, but she uses her legs to flaunt her sexiness on the red carpet and dance vigorously on stage. So, she reportedly insured her legs, but also her voice for $70 million, as both are her trademark and she needed to take some serious precautions to remain a hit.

[dx_custom_adunit desktop_id="RTK_K67O" mobile_id="RTK_5yk0"] The singer seems to have adopted the KISS singer, Gene Simmons' trademark tongue sticking behavior. But since she knows she's not popular with everyone, she decided to allegedly insure her tongue for $1 million...you know, just in case someone feels like hacking it off with shearing scissors.

The late American jazz singer, who could also make us laugh had a prominent nose that earned him the nickname, "The Schnoz." But of course, if anything were to ever happen to his nose, he would have been SOL, so he insured it for $50,000 with the insurance company Lloyd's.

There are celebrities who insured body parts, and others who insured themselves in the event a UFO abducts them and hurts them. The "Terms of Endearment" star fears that aliens might abduct her. So, she took out an alleged $25,000,000 insurance policy to repair any damage.