Celebrities Who Have Gotten Seriously Dragged For Offensive Cultural Appropriation 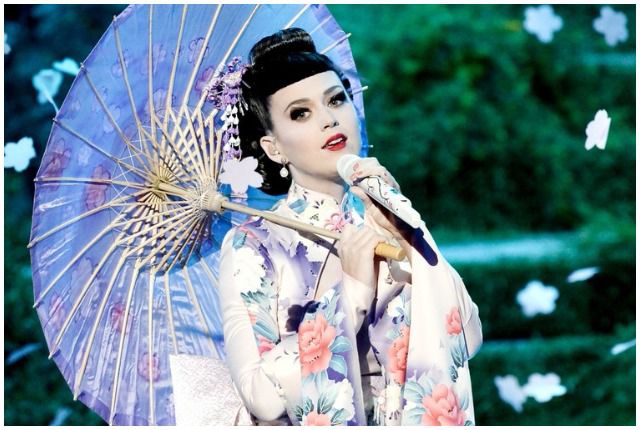 In an age where screenshots can be captured for an eternity as fast as you can say "receipts," celebs should know better than to showcase their lack of political correctness while flexing for social media. Boasting millions of followers between a variety of different platforms, today's hottest stars are both blessed and cursed by the ability to share their headline-making mess ups with the public by a simple press of a button. From seriously offensive Halloween costumes to questionable on-stage clothing choices and hairstyles, check out these celebs who are undeniably guilty of cultural appropriation.

Khloe Kardashian appaarently thought it was a good idea to flex her own version of Bantu knots for the 'Gram. Originally captioning the snap "Bantu Babe," Kardashian quickly changed the wording to "I like this one better" after facing an instant wave of backlash. Without acknowledging the historical signifcance of the style, Kardashian proved that she has no real interest in the origin of the historically African hairstyle.

For their walk on the Marc Jacobs runway debuting the designer's Spring/Summer 2017 collection, models Bella Hadid and Kendall Jenner each sported a set of colorfol faux dreadlocks. Nearly a year after the collection received harsh backlash, Jacobs issued an statement apologizing for his insensitivity. "Maybe I just don't have the language for this, or maybe I've been insensitive because I operate so inside my little bubble of fashion," he said.

What is it with celebs and thinking that Native American headdresses are simply accessories that you can put on and take off on a whim? Back in 2014, model Alessandra Ambrosio took to Instagram to show off her "Coachella inspired" outfit. Note to Ambrosio--items of a dress specific to a culture do not exist just to serve as your festival fashion inspiration.

Every year, it seems that another batch of celebs parades their culturally insensitive Halloween costume on social media for their millions of followers to gawk at. Captioning this upload "sheik p----," Scott Disick smolders at the camera while wearing an "Arab Sheikh" costume. Completely ignorant to the fact that he was mocking many Arabic leaders with his clothing choice, Disick refused to comment on the rightful backlash he received.

After Rihanna tried her hand at a "sexy Niqab" photoshoot at a mosque in Abu Dhabi, the international superstar was asked the leave the sacred place of worship. According to a spokesperson for the religious center, RiRi was informed she had to leave the property due to violating the "moral code" of Islam. After uploading the snaps to her personal Instagram page, the "Disturbia" songer was dragged for not respecting both the mosque and Islamic culture in general.

While Coachella fashion is notorious for its "out there" otherworldly style, that doesn't mean that cultural sensitivity can be thrown out of the window in pursuit of the perfect outfit. Donning a traditional Native American headdress, Khloe Kardashian joined her sisters in showing the world that the KarJenner family is not entirely self-aware. Treating such a symbolic, rarified item of clothing as a mere accessory practically screams cultural misappropriation.

Despite what "Bangerz" era Miley Cyrus would have you believe, she did not invent twerking. Passing off the New Orleans bounce-music dance as her own, Cyrus took the dance move everywhere from her "We Can't Stop" music video to her unicorn hoodie-clad dance session. Always ready to hop onto Twitter with a salty clapback, rapper Azealia Banks proceeded to call Cyrus out for being "whack as f---."

Following her 2013 AMAs disaster, Katy Perry found herself in the cultural misappropriation hotseat once more for her "Dark Horse" music video. With braided hair and traditional Egyptian dress, Perry didn't attempt to hide the clear inspiration for the visual--by borrowing from a culture that is not hers. Angered by the criticism, Perry flippantly told Rolling Stone that she will just stick to "baseball and hot dogs" moving forward.

Just because Kim Kardashian was "really into" the Bo Derek braids that she debuted on Snapchat doesn't mean the reality queen rocking the 'do failed to ruffle some high-profile feathers. Despite getting dragged for flaunting her small braided cornrows on social media, Kardashian took to Instagram to let her haters know that she gives "zero f---s" about their criticisms. Just call her Bo West, OK?

Following in the footsteps of fellow former Disney star Selena Gomez, pop star Miley Cyrus chose to wear a bindi as a facial accessory without acknowledging its spiritual and cultural significance. Moving on from her oft-criticized penchant for misappropriating black culture, Cyrus took a dig at Hinduism instead while honoring Pride weekend. Yikes.

Not even Taylor Swift's well-oiled PR machine could fend off the backlash from her "Shake it Off" music video. Trying her hand at parody, Swift attempted to poke fun at her own lack of coordination by including a caricature of hip hop culture in the visual. Not surprisingly, Swift attempting to twerk with her black back up dancers did NOT go over well.

By now, the KarJenner sisters are definitely used to getting called out for their blatant appropriation of black culture. Uploading a picture to Instagram with the caption "I woke up like disss," Kylie Jenner is clearly proud of her cornrow-styled hair. In response, "Hunger Games" starlet Amandla Stenberg called out the Lip Kit queen in a very public way by including the #WhiteGirlsDoItBetter hashtag in her criticism.

Avril Lavigne's status as a goth-pop princess didn't stop her from dipping her painted fingernail into Japanese culture for her "Hello Kitty" music video. Accused of fetishizing the culture for her professional pursuits, Lavigne clapped back that there's no way the track's visual could POSSIBLY be racist. "RACIST??? LOLOLOL!!! I love Japanese culture and I spend half of my time in Japan. I flew to Tokyo to shoot this video," said the singer.

When it comes being a "culture vulture," no name comes to mind quicker than rapper Iggy Azalea. Often blasted for cherry-picking from the vast world of hip-hop without any respect for actual issues plaguing the community, Azalea caught heat more than once for the issue. Speaking to the Guardian, singer-songwriter Hasley blasted the rapper's "complete disregard for black culture."

While performing her hit track "Come & Get It" at the 2013 MTV Movie Awards, Selena Gomez chose to wear a red dress while sporting a matching bindi on her forhead. Soon after Gomez took the stage, Hindu leaders at the Universal Society of Hinduism slammed the pop star for wearing the religious ornament. Arguing that Gomez exploited the tradition for "seductive effects," the religious scholars were clearly NOT here for Gomez's blatant appropriation.

Normally lauded for her fashion-forward choices that challenge societal boundaries, Lady Gaga landed in hot water after walking for designer Philip Treacy at the 2012 London Fashion Week. After sporting a hot pink Burqa on the runway, Gaga hinted at a track bearing the same name on her then yet-to-be-released "Artpop" album. In response to the criticism, Gaga changed the track's name to "Aura."

During her cover shoot for AnOther Magazine, actress Michelle Williams wore "red face" along with sporting braided hair and a feather. In an effort to justify their ill-advised decision, the publication argued that Williams was simply transformed in "different characters" for the "There's No Place Like Home" issue theme. Their argument created yet another controversy however, in which they blatantly compared traditional Native American dress to that of a "costume."

Aside from making headlines with her once-gilded status as Taylor Swift's gorgeous bestie, Karlie Kloss stirred up some serious drama in her 2012 runway walk for the Victoria's Secret Fashion Show. Kloss accented her cheetah print binki with a traditional Native American headdress and culturally significant jewelry--and got absolutely dragged for it. In response, Kloss tweeted that she was "deeply sorry" for the act of disrespect.

Coldplay and Beyonce certainly had a lot to answer for after dropping their "Hymn For The Weekend" collaboration visual. Set in India, the music video was dragged for plundering the visual beauty of a nation for their performative benefit. "Just gonna throw this out there, if Beyonce & Coldplay are PROFITING from a culture that isn't theirs and getting praise, it's appropriation," wrote one Twitter user.

Believe it or not, pop star Katy Perry actually thought it was a GOOD idea to dress up as a geisha during her 2013 VMAs performance. Donning a modified kimono and a heavily-powdered face, the "Unconditionally" singer was blasted for both cultural appropriation and the harmful use of stereotypes while belting out her chart-topping hit. While the singer-songwriter eventually apologized, many still viewed her "bastardization" of other cultures as unquestionably racist.