The Most Breathtakingly Lavish (And Expensive) Celebrity Homes

Matthew Loffhagen
The Most Breathtakingly Lavish (And Expensive) Celebrity Homes May 22, 2019Leave a comment 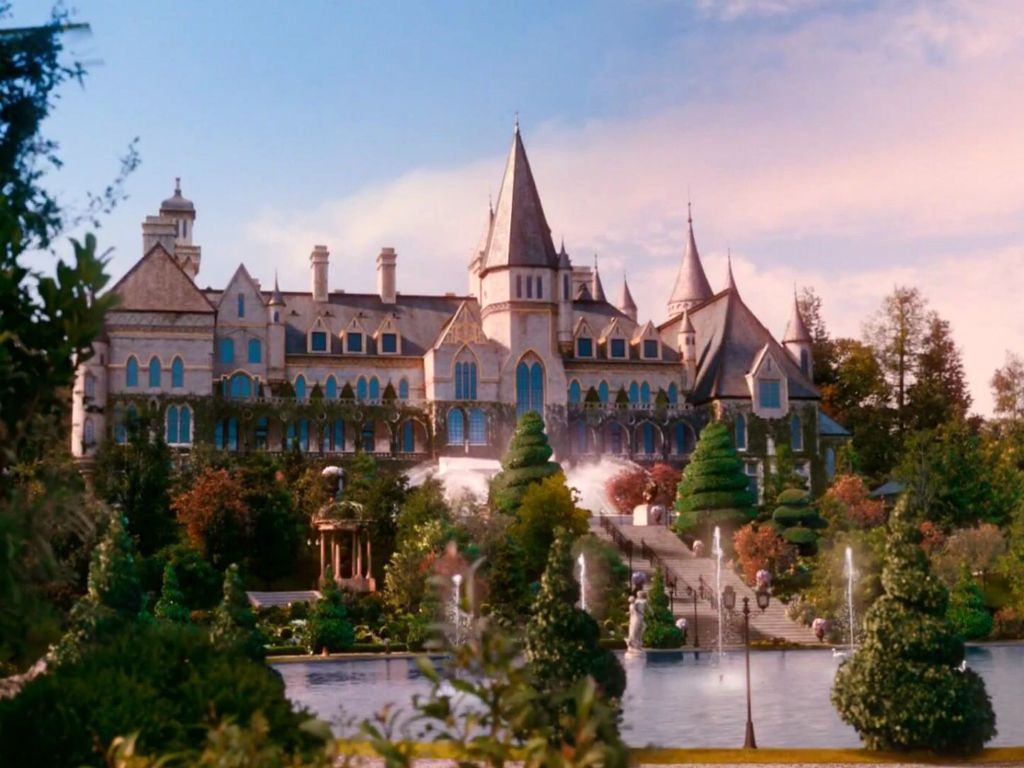 Us normal (read: poor) people don't normally get to see the enormous mansions that rich and famous people get to live in. But every now and then, a celebrity sells their mansion. That's when the rest of us get a chance to peek inside...

Hidden Hills is the new Beverley Hills. The quiet LA neighborhood has always played host to the rich and famous, but with residents including Miley Cyrus and Drake, it's beginning to gain a lot more notoriety. The crowning jewel of Hidden Hills is the mansion owned by Kim Kardashian and Kanye West, a truly labyrinthine structure that they bought in 2014 for $20 million from Lisa Marie Presley. But the West family has still never been happy with their gigantic home, and it's become known as the "never-ending remodel" because it's constantly under construction.

Caitlyn Jenner's fantastic Malibu home was a lot more modest than Kim's enormous mansion. But while it was a lot cheaper to buy (costing "only" $3.5 million), it was a bespoke wonderland in its own right. It ultimately proved to need a lot of upkeep. In 2017, 60 mph winds ripped part of the house's roof clean off, and in 2018, it was severely damaged in the California wildfires. Its current occupancy is unknown, but Jenner is probably not spending a lot of time there at present.

Poor Tom Cruise. Twice now, in 2014 and then again in 2017, he has attempted to sell his expansive Colorado home. Neither time did he actually succeed in finding a buyer. Because while the place is absolutely beautiful, it is incredibly remote and hard to get to. Plus, Cruise insists that it's worth $59 million, and potential buyers in the area clearly disagree.

Jessica Chastain's beautiful apartment in Midtown Manhattan cost her a cool $5 million, which is understandable considering its convenient location opposite Carnegie Hall and its expansive size. Try finding another New York City apartment that has three bathrooms.

Britney Spears purportedly paid around $7.4 million for her expansive estate in Thousand Oaks, California. If that really is the price she paid for the house, then she got a bargain. In 2013, it was listed on the market for $12 million. Well done, Britney.

Khloé and Kourtney Kardashian both live on an impressive estate in Calabasas, California. This is a house with a distinct pedigree: The Kardashians purchased it for $7.2 million in 2014 from none other than Justin Bieber.

You don't necessarily always want to buy a house when renting is easier. From 2011 to 2012, singing sensation Adele rented Lock House, an enormous mansion in Sussex in England. In 2018 the house went on the market, as its owners attempted to sell it for $9.5 million.

Ellen Degeneres' beautiful former California mansion looks gorgeous, but not exactly cozy. This house, meant more for entertaining guests than daily living, is nicknamed Rancho San Leandro. DeGeneres put it back on the market after owning it for only eight months. And she made a nice proft from the flip, selling it to the founder of Tinder for $11 million after buying it for $7 million.

In 2017, James Corden purchased an expansive home in Los Angeles. The house cost almost (but not quite) $10 million, with five bedrooms and eight bathrooms. It also features a swimming pool, because of course it has a pool, it's in LA.

Maybe rich people need more bathrooms than bedrooms because they throw massive parties but don't want people staying overnight. Anyway, Lady Gaga's Malibu mansion has seven bedrooms and five bathrooms, and the "A Star is Born" actor describes the house as her "oasis of peace." But peace doesn't come cheap. The house is worth around $22 million.

Why buy a single house when you can buy several? In 2018, Ed Sheeran purchased four houses next to each other in a tiny village in Suffolk, England. Sheeran has plans to turn at least on of these homes into a "man cave" complete with a music room. Locals have (understandably) nicknamed the growing complex "Sheeran-ville," but reports indicate that Sheeran is very down to earth and involved in the community. The houses all orbit Sheeran's main mansion, which cost him a modest $2 million, and to which he set fire in early 2019.

Tyra Banks used to live in this incredible Spanish colonial estate in Beverly Hills. The house was originally built in the 1920s, and features authentic wood beams and a beautiful rustic design. When Banks let go of the house in 2016, it sold for $7.5 million.

Jennifer Aniston made a very shrewd investment when she and and Justin Theroux bought an eco-friendly mansion in Bel Air in Beverly Hills together in 2012. The pair got married in the house, which is fair, as it's absolutely gorgeous. Aniston eventually sold the house in 2018 for an eye-watering $75 million.

Wow, Sandra Bullock has creepy taste. While her beautiful Victorian Goth house in New Orleans might be impressive, it's probably also very, very spooky at night. The house was built in 1876 for U.S. Senator James Eustis, and Bullock purchased it (not from him, obviously) in 2007 for $2.25 million.

Jennifer Lopez's beautiful Bel Air mansion has quite the history behind it. "CSI:NY" and "House" star Sela Ward previously owned the estate, having bought it with her husband over a decade ago for around $3.8 million. When Ward put the house on the market in 2015, she was looking for almost $40 million, but J-Lo haggled her down to $28 million instead. It still seems like Ward did pretty well for herself out of the deal.

In 2016, Kendall Jenner bought her dream home. At $6.5 million, this LA property wasn't exactly cheap, but it was a steal compared to the $8 million that its former owners were asking for. And who exactly did Jenner buy this house from? None other than Emily Blunt and John Krasinski.

In 2015, Selena Gomez bought this impressive Fort Worth mansion for $3.5 million. Its expansive 1.5-acre grounds mean the house is wonderfully secluded, and it even comes with a putting green. According to reports, though, Gomez used the house only as an occasional retreat, as she was jet-setting too frequently to make use of it. That must be why she was willing to take a loss on the property. She sold it in 2017 for $3 million.

Back in 2015, a teenage Kylie Jenner bought what she called a "starter home" in Calabasas, California. The expansive house would be a suitable home for life for most people, and is outside of most families' budgets at a whopping $2.6 million. Not long buying it, Jenner started snapping up additional houses, including not one but two in Hidden Hills.

There's a rumor going around Hollywood at the moment that Bruce Willis will only ever work a single day on any movie he appears in, and considering how nice his New York house is, that's completely understandable. This $9 million mansion is in an elite neighborhood. His neighbors include Martha Stewart and Catherine Zeta-Jones.

Amal and George Clooney have particularly elegant taste, having purchased Hill House in Sonning Eye, a sleepy village on the border of Oxfordshire and Berkshire in England. This 17th-century mansion, valued at around $10 million, is a Grade II Listed Building, meaning it's of historical significance, and it's therefore illegal to tear it down or perform extensive renovations. But that didn't stop the couple from building an expansive swimming pool next to the house. Loopholes are fun.

Why own a house when you can own an entire ZIP code? Will and Jada Pinkett Smith's enormous complex in Calabasas, California, is worth an approximate $42 million. But no home, regardless of size and value, is completely safe from the destructive force of nature, as was seen in 2018 when Will Smith took to social media to voice fears that his mansion would be caught up in the California wildfires.

Taylor Swift owns several impressive properties, but by far the coolest is her huge, eight-bedroom mansion atop one of the highest points in Rhode Island. Swift bought this house in 2013 for $17.5 million, and it has been claimed by some news outlets that she paid in cash. Swift has used the massive house for hosting many parties, including a blowout Fourth of July party the year she bought it.

Of course Nicholas Cage once bought a castle. Of course he did. The star of "National Treasure" and "Drive Angry" was once one of the best-paid actors on the planet, and he used his money very poorly, purchasing the $10 million Midford Castle in England. Cage didn't hold onto the castle for long, but it's far from the weirdest thing he's ever bought. Cage currently still owns a pyramid tomb in New Orleans that will be his final resting place when (if) he finally runs out of steam.

Oprah is exceptionally rich, so she owns more than a few houses around the world. By far the most impressive is her mansion in Montecito, California. Oprah purchased the house, which is nicknamed "The Promised Land," in 2001, when it cost her around $50 million. But property prices never stay still for long, and some estimates claim that The Promised Land is now worth as much as $90 million. But it's hard to be certain, because it's very rare for realtors to get an invitation inside.