Forgotten Pop Stars Of The ’00s: Then And Now 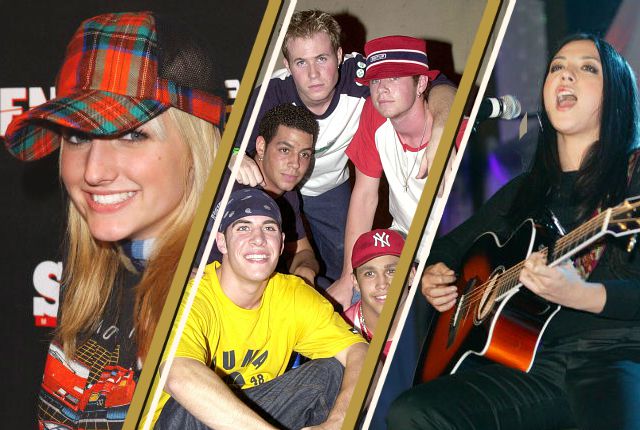 Who are the most iconic but forgotten pop stars of the '00s?

The '00s were perfect. From the matching his-and-her denim suits to Paris Hilton's murder in House of Wax, it was peak culture. How can you hate the decade that gave us Kelly Clarkson? You can’t. But, more than anything else, music defines the era. I'm talking about Beyonce going solo, Eminem losing himself, and Britney going toxic. But not every pop star of the 00s is as fondly remembered as the decade’s biggest hitters. For every Christina Aguilera, there are 10 popstars who burned bright, but sizzled out quickly. This doesn’t mean we loved them any less! So join us as we look at the era’s biggest stars, who you maybe haven't thought about in years. And we'll also look at where these forgotten pop stars of the '00s are now.

Amerie is best known for her international chart hit ‘1 Thing’, which peaked at number 8 on the Billboard Top 100. But in the 00s, Amerie was kind of everywhere. She was in First Daughter alongside decade-heavyweight Katie Holmes. She was also on the BET show The Center. She was nominated for Grammy’s and her three albums were all relatively large hits, but while some people originally saw her as a rival to Beyoncé’s throne, that didn’t super work out…

[dx_custom_adunit desktop_id="RTK_K67O" mobile_id="RTK_5yk0"] Amerie has re-branded as Ameriie, which is the actual spelling of her name. While she has been dropped by Def Jam, she continues to release her own music. Ameriie is married to Columbia records executive Lenni Nicholson. They are currently expecting their first child. Ameriie is still young enough that a comeback isn’t out of the realm of possibility, and anyone who has heard her first album, All I Have, knows she has the chops to conquer the world.

Christina Milian was a staple of the 00s. She was an actress, singer, model, and all around celebrity. Her high point has to be ‘Dip It Low’, probably the single greatest song of the 00s. I mean you can’t top these lyrics: ‘Dip it low, pick it up slow, roll it all around, poke it out like your back broke, pop pop pop that thing.’

Christina Milian hasn’t faded from the entertainment industry, she just isn’t everywhere like she used to be. She released an EP a couple of years ago. It really didn’t get too much traction, but she’s still releasing music! Also, she was a lead on the short-lived John Stamos show Grandfathered, and was featured in The Rocky Horror Show: Let’s Do The Time Warp Again.

Tweet had trouble following up ‘Oops (Oh My)’. While she had two further minor hits in ‘Call Me’ and ‘Smoking Cigarettes’, she never really got out from under the notoriety of ‘Oops (Oh My)’. In 2016, she released an album produced by Missy and Timbaland entitled Charlene. She is married to Pastor Jamal Bryant.

The SNL performance that ruined her career will go down in history as one of the most cringe inducing pieces of TV ever. But before that she was riding high on the success of her massive hit ‘Pieces of Me’ and the success of her debut album Autobiography. It’s a shame, because she was all ready to become the next Avril!

[dx_custom_adunit desktop_id="RTK_K67O" mobile_id="RTK_5yk0"] Basically, she got a nose job and she didn’t really look like Ashlee Simpson anymore. She got married, had some kids, and retired from acting (not that many people were that familiar with her acting work). Apparently, she is working on her fourth studio album. While you’re waiting with bated breath for that, go back and listen to ‘Pieces of Me’. It’s still a bop!

Irish singer Samantha Mumba conquered the world with ‘Gotta Tell You’, a pop jam so infectious and a voice so distinctive you just knew she was the next Janet. Except she wasn’t quite the next Ms. Jackson. That doesn’t take away how enjoyable a slice of early 00s pop her debut album was…or the amazingness of the opening lyrics of ‘Gotta Tell You’: ‘your love for me came as a waterfall, flowing inside me like never before.’

Samantha is still a pretty big star in her native Ireland. Since the time of her biggest hit she’s turned to acting, retired from music, came back to music, and modelled for Marks & Spencer. Most importantly she starred on Celebrity Masterchef Ireland, which I think we can all agree is the king of Masterchefs.

[dx_custom_adunit desktop_id="RTK_K67O" mobile_id="RTK_5yk0"] Willa Ford was part of the post-Britney spate of clones, which included Christina Aguilera, Mandy Moore, and Jessica Simpson. While those three ladies went on to distinguish themselves beyond the off-brand Britney origins of their success, Willa was less successful. While a major popstar in her time, and a household name for a certain aged millennial, her only real hit was ‘I Want to Be Bad’.

Willa’s post-popstar career hasn’t been too great.  The highlight is a non-lead role in the terrible Friday the 13th (2009) reboot. She has also starred in some direct-to-video stuff and things you’ve probably never heard of. In 2015, she married former NFL-er Ryan Nece. They had their first child in 2016.

For most ladies and gay guys of a certain age, Jesse McCartney is the ultimate early 00s teen idol. McCartney was a triple threat – acting, singing, and boybanding. But it was his solo career that really made him an 00s popstar. His debut album Beautiful Soul and its single of the same name were massive hits and I bet more than a few readers had their sexual awakening to the music video – that hair, those green eyes, and that smile. Swoon.

[dx_custom_adunit desktop_id="RTK_K67O" mobile_id="RTK_5yk0"] Jesse McCartney is still going strong. He is releasing his 6th album this year and continues to feature in film and TV. Recently he was featured in Fear the Walking Dead and has been doing voicework for video games. While he has lost his early 00s boyband hair, he still has his green eyes and delightful smile.

The band’s star was always Ashley Parker Angel. The Nick Carter/Justin Timerlake of the band looked like a sentient Ken doll, and his post-O-Town career accurately reflects the prospects of a dude that looks like him. His Instagram is thirst trap central, and he has continued to make music and branched out into acting. The highlight of his acting career definitely being the male lead in the fourth installment of the trashy film series Wild Things, appropriately titled Wild Things: Foursome.

[dx_custom_adunit desktop_id="RTK_K67O" mobile_id="RTK_5yk0"] The rest of O-Town consisted of Erik-Michael Estrada, Trevor Penick, Jacob Underwood, and Dan Miller. None of them reached Ashley Parker Angel levels of D-list stardom following the band’s initial breakup, although some did make attempts at solo careers. These four have reformed O-Town without Ashley and are currently working on new music.

Michelle Branch was a massive star in the aughts. Michelle was a legitimate continuation of the Lillith Fair singer-songwriter trend of the 90s. Her biggest hit was the powerballad ‘Everywhere’. She also had a massive hit with ‘All You Wanted’ and other memorable minor hits in ‘Goodbye’, ‘Breathe’, and ‘Are You Happy Now?’.

Michelle Branch had a bunch of difficulties with the followups to her original few hit albums. Lately she has signed with new record label Verve Records and released a new album called Hopeless Romantic. The album received some great reviews and brought Michelle back to some prominence after years out of the spotlight. While she might not have matched her 00s stardom, she is on her way back to the big leagues.

[dx_custom_adunit desktop_id="RTK_K67O" mobile_id="RTK_5yk0"] If you don’t listen to ‘A Thousand Miles’ at least once a year and think ‘this is such a timeless jam’, then I don’t know what to say to you. It is such an epic classic. Along with the video of Vanessa playing a piano that is shooting down the street, you have the definition of iconic.

I feel like it was hard for Vanessa to get out from under the massive success of ‘A Thousand Miles’. Vanessa has continued to release music and she is currently working on her 6th album. She got married, had a child, and also came out as bisexual. The singer is continuing to her thing, and if you are a fan of ‘A Thousand Miles’ you should check out her other stuff!

Teen heartthrob Mario was known for being an angel voiced hottie. His first hit ‘Just A Friend’ was an incredible re-working of the Biz Markie classic. But it was his second massive hit, ‘Let Me Love You,’ which cemented his status as a massive popstar. It was a number 1 hit and inescapable in the spring of 2004. Later in the decade he had another hit, ‘Break Up’, with Gucci Mane and Sean Garrett.

[dx_custom_adunit desktop_id="RTK_K67O" mobile_id="RTK_5yk0"] Mario’s career since the 00s hasn’t been on the same level as his teen years. Being a teen star is a hard transition into adulthood. He is working on his fifth album, and while it was supposed to be released 2016, it has been delayed a couple of years. It is now scheduled to come out this year, and the still relatively young 32-year old still has the voice and looks to stage a major comeback!

I hate when people call Blu Cantrell a one-hit wonder. She had two massive hits, thank you very much! Honestly when you hit it out of the park to the extent she did on ‘Hit Em Up Style’ and ‘Breathe’, you have done your service to the world as a popstar. There were questions about Blu’s age (that she was older than she said) when she came out, which distracted from the fact that she was a brilliant popstar (also it was judgy and ageist).

Blu has dealt with some mental health issues since her 00s heyday. But she is apparently working on new music, and it would be awesome if she could prove all the haters wrong, and show she is a lot more than just ‘Hit Em Up Style’. But anyone that’s listened to her underrated first album ‘So Blu’ already knows that.