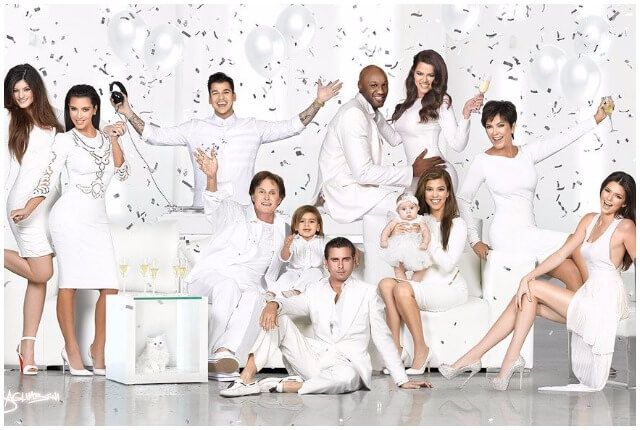 There's no Christmas card like a Kardashian Christmas card. Over the years, the Kardashians have staged tacky and over-the-top backdrops for their annual Christmas card while showcasing family members in various stages of both undress and cosmetic enhancement. Peep this festive collection of holiday cards that reaches as far back as the '80s, when papa Kardashian was still alive and Kris Jenner embraced the nose she was born with. The photo set provides a drab-to-glam timeline of the KarJenner siblings' romantic entanglements, with various ex-beaus popping in and out of the group pics. It's a Kardashian Christmas!

Nothing says Christmas like matching plaid and tartan. While not an official family holiday card, this snap features the golden trio- Kim, Kourtney and Khloe snuggled together on a cozy December night.

Baby Rob had a lot to cry about in this 1988 Christmas candid. While Kim and Kourtney are rocking that just-tanned glow, Rob and Khloe are noticeably washed out from the camera's flash, as seen in that killer grimace/scream combo.

After Robert Kardashian Sr. split from wife Kris, he kept his fam in the holiday spirit with this five-member snap. Maybe it was the stress from his impending divorce, but he definitely missed the card's butchering of Khloe's name. Khole?!

While Rob. Sr was embracing the single life with his holiday photo, Kris Jenner threw herself into her new blended family with then-named Bruce Jenner. The Kardashians are all smiles next to their soon-to-be stepsiblings: Burt, Brody, Cassandra and Brandon Jenner.

Nothing says "California Christmas" like Santa decked out in stunner shades. After Rob Sr. and Kris' divorce was finalized in 1991, the Kardashian matriarch was all-in when it came to embracing her new blended family. We're obsessed with the unisex ties, BTW.

Is there a more '90s-themed combo than denim and studded leather? For some reason, Kris, Kourtney, Khloe and Kim gathered around a boss hog with stepdad Caitlin Jenner and her children from a previous marriage. As you can see, Kim is so over the direction for this shoot.

The 1995 KarJenner holiday photo was the last to merge the two groups together into one happy family. Overshadowed by Kourtney's barely-there dress is baby Kendall Jenner who made her debut that year.

The family went for a more toned-down minimalist vibe with this late-'90s card with a young Kylie and Kendall Jenner at the forefront.

If Kris Jenner can move on, so can Rob Sr. The Kardashian patriarch thought it was a good idea to have Kim, Kourtney, Khloe and Rob lounge on the staircase next to his new wife, Eleanor Pearson, for this holiday snap. Nothing says early '00s like crushed velvet.

The KarJenners as we know and love them began to take shape in this 2003 holiday photo. The older siblings bring on the glam in their low-cut, slinky dresses while Rob, Kendall and Kylie brood in the background.

For some reason, the KarJenners (sans Caitlin's children from a previous marraige) decided to pose facing the sun and squinting for this holiday photo. The group is back at it with the matching duds, this time pairing starched white shirts with acid-washed flares.

Ah, the last pre-fame Kardashian Christmas card. With a low production quality and black-and-white filter, the KarJenners (and Caitlin's daughter Casey) blow kisses for the camera.

You can definitely tell the budget was upped for the Kardashian's 2008 holiday photo. Used as a promotional snap for their new reality show, the family posed in matching red dresses and showcased Kylie Jenner climbing a ladder for some reason.

For their 2009 christmas card, the family borrowed a snap from Khloe's marriage to Lamar Odom. In the picture, Kourtney is heavily pregnant with son Mason Dash Disick and there's even a surprise apperance by longtime friend Ryan Seacrest.

There's not a smile in sight for the superglam 2010 Kardashian family Christmas photo. Including Kourtney and Scott's growing family with toddler Mason, the 11-member group smolder for the snap taken by professional photographer Nick Samblingini.

The KarJenner Krew grew by one member just in time for their 2012 Christmas card! Kourtney Kardashian and longtime BF Scott Disick proudly show off daughter Penelope for the shoot, in which everyone is seriously hype about the confetti falling from the sky.

We're pretty sure only Kanye knows what's going on in the Kardashian's 2013 family Christmas photo. Kim K's hubby recruited his favorite photographer David LaChapelle for this casino-themed snap, because nothing says Christmas like slot machines. But where's Rob?

Following the 2014 gap year, the Kardashian kids took center stage for this stripped-down holiday shoot. Pictured from left to right: North West, Penelope Disick, Mason Disick and Reign Disick. At the time of the shoot, Kim K was gearing up to give birth to baby Saint.

While not the official Christmas card of 2K17, this snap will have to tide fans over before the big reveal, which Kris Jenner told fans is definitely coming.

"We're thinking about it," revealed Jenner about the card's early stages. "Kim is getting a family poll-- a family vote."