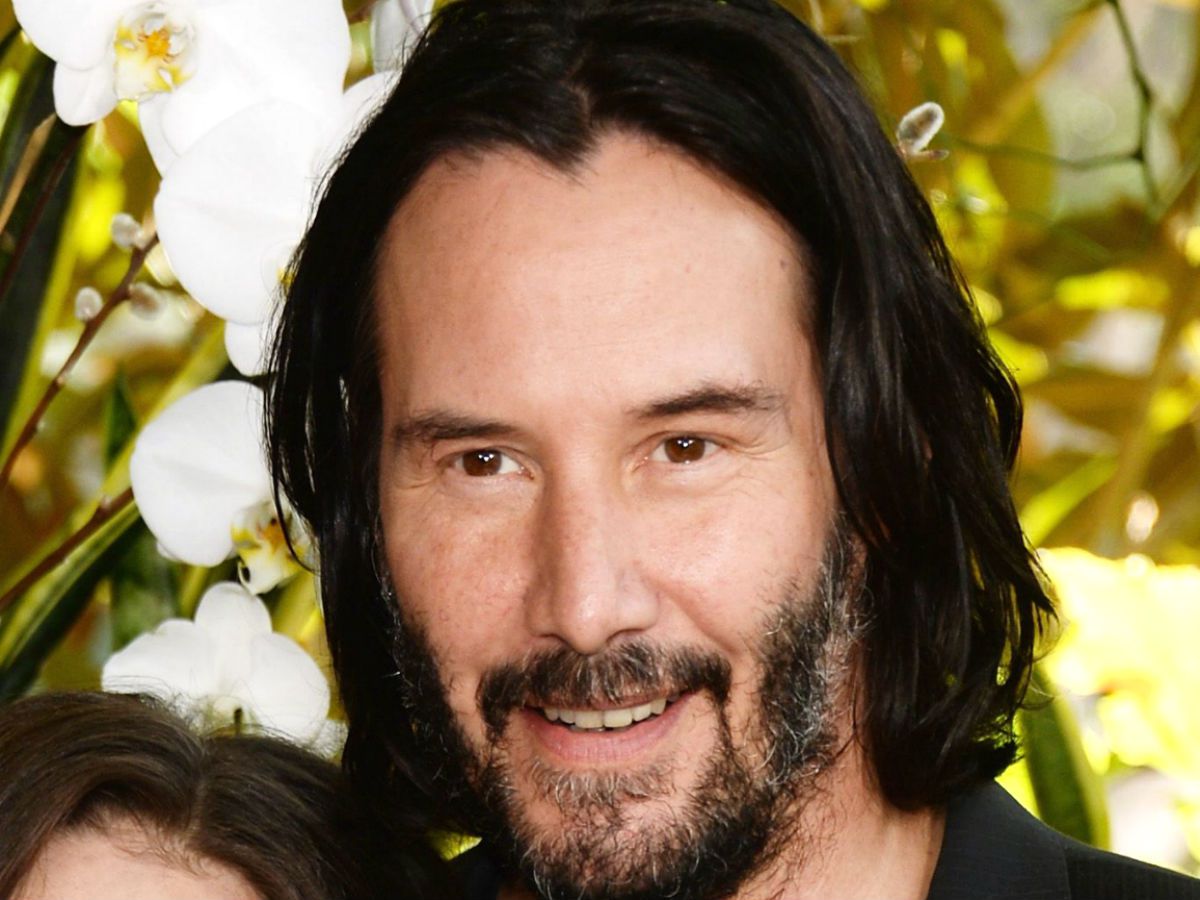 Over the years, Keanu Reeves has earned critical acclaim for his vast movie career with roles ranging from action hero to romantic lead to comedic standout. Outside of his films, Reeves lives a pretty amazing existence with a unique heritage and interesting life experiences. Step into the world of Keanu with these weird facts you may have never known about the actor.

What's in a Name

Having Hawaiian, Chinese, and English heritage, Keanu's name translates to "cool breeze over mountains." When he traveled to Los Angeles to begin his acting career, casting agents found his name too foreign and hard to pronounce. Like many actors just starting out, Keanu considered changing his name. Some of those options were K.C Reeves, Chuck Spadina, or Page Templeton III.

Raised in Toronto, Reeves got caught up in the ice hockey sensation and played throughout his high school years. As his team's goalie, he earned the nickname "The Wall" and even served as a coach for the hockey club. Deciding to pursue an acting career, he passed on an opportunity to try out for the Ontario Hockey League's Windsor Spitfires.

Reeves had a paranormal experience as a young child when he witnessed the apparition of a floating jacket. He recounted the terrifying tale to Jimmy Kimmel during an interview, expressing his disbelief over the fact there were no limbs or head attached to the mysterious specter.

Estranged from his father, Reeves lived with his mother and their housekeeper. Working as a costume designer, Reeve's mother would create Halloween costumes for her son including Dracula, Batman, and Cousin Itt. One of his mother's clients, Alice Cooper, would often visit the house for fittings and babysit Reeves while pranking the housekeeper with "fake vomit and dog poo."

Till Death Do Us Part

It turns out Keanu Reeves has been secretly married to Winona Ryder for quite a while. While filming the wedding scene in Coppola's "Dracula", the director used a Romanian priest who performed a real marriage ceremony. The blissfully newly-aware couple have apparently enjoyed married life since 1992.

Reeves has been the subject of numerous conspiracy theories due to the fact that despite being 54 years old, he appears to haven't aged a single day. Theories range from him having achieved vampire-like immortality to being the reincarnation of prolific historical figures such as Charlemagne and Paul Mounet. When confronted by Jimmy Fallon regarding these rumors, Reeves downplayed the investigation with witty remarks, fueling even more scrutiny from bloggers and fans.

To Be or Not to Be

While mainly recognized for his dramatic action roles, Reeves is also a Shakespearean actor. In tenth grade, he was in a production of "Romeo and Juliet" and as a teenager starred in a production of "The Tempest." In 1993, he played the villainous and devilishly handsome Don Jon in Branagh's "Much Ado About Nothing." After turning down a sequel to "Speed", he played Hamlet in 1995 for the Manitoba Theater Centre.

Appearing in Paula Abdul's 1991 music video for "Rush, Rush", Reeves vies for the singer's affections despite her already being with another man. In an attempt to prove their worth, both men agree to a game of chicken which leads to the death of Abdul's lover. Toward the end of the video, Reeves and Abdul embrace each other and share a tender kiss.

He Will Rock You

During the mid-1990s to early 2000s, Reeves co-founded the band "Dogstar" with Robert Mailhouse and was the bassist and backing vocalist. In 1994, the band toured across the U.S and Asia and opened for David Bowie in 1995. In 2002, the band members broke up to explore other careers.

Holding Out for a Hero

Despite his various heroic action roles, Reeves has shied away from donning any form of cape and cowl. Losing out to Hugh Jackman for the role of Wolverine, he's been considered for Doctor Strange, Namor, Moon Knight and more. Kevin Faige, President of Marvel Studios, has been desperate to introduce the actor to the MCU but so far, the perfect role has yet to be found.

Marvel isn't the only one vying for the actor's attention. Reeves has also been considered for roles in the DC Universe. He was turned down for "Batman Forever" in favor of Val Kilmer and expressed interest in playing the Dark Knight in "Dawn of Justice" before Ben Affleck took the part. He was also considered for Scarecrow had Joel Schumacher's "Batman & Robin" led to a fifth installment in the franchise.

According to the actor, he performed roughly 90% of his own stunts in "John Wick" after receiving both martial arts and gun training for eight hours per day for over four months. He also memorized the Red Circle nightclub fight scene the same day of filming and performed the choreography while running a fever of 104-degrees Fahrenheit.

Glitch in the Matrix

Due to intense martial arts training and wire stunt choreography, many of the actors on the set of "The Matrix" suffered intense physical injuries. Reeves alone suffered a "two-level fusion" of his cervical spine which triggered partial paralysis in his legs. Even after undergoing neck surgery to correct the issue, he was still left unable to use the lower half of his body resulting in his character not throwing many kicks during combat.

Known as a motorcycle fanatic, Reeves founded his own manufacturing company called Arch Motorcycle Company which was featured during a promotional ad for Squarespace. His passion for riding hasn't wavered despite the actor suffering major injuries over the years. Some of the worst include a ruptured spleen, broken ankle, and a tooth through his upper lip.

Reeves' generosity is so well known that it's become the stuff of legend. From giving a significant portion of his "Matrix" earnings to the special effects and costume department as well as giving the stunt team their own Harley Davidson motorcycles to providing charity donations and opening a private cancer foundation, the actor has proven himself truly humble. He also agreed to receiving pay cuts to ensure Al Pacino was cast in "The Devil's Advocate" and Gene Hackman in "The Replacements."

Based on a 4chan meme entitled "Sad Keanu" featuring the actor in a depressed mood sitting on a bench, June 15th is officially "Cheer Up Keanu Reeves Day." Despite the internet's reputation for mocking celebrities, the holiday is entirely sincere with fans exchanging heartfelt wishes toward Reeves and swapping stories of the actor's kindness.

Inspired by the "Sad Keanu" meme, the actor released a book of poetry called "Ode To Happiness." Each line is accompanied by an ink-blot illustration created by Alexandra Grant to emphasize the melancholy humor of the depressing work.

Someday My Prince Will Come

Gracing 4chan meme archives and Reddit threads, Reeves has been the focus of numerous social media outlets. Early this year, illustrator Crystal Ro paid tribute to the actor in the form of fan-art portraying him as every classic Disney prince. Due to the recent outpouring of support and love from fans, the internet has officially dubbed Reeves its "boyfriend."

Only Have Eyes for You

While many were delighted by Reeves' small cameo as an "agro-hipster version of himself" in "Always Be My Maybe", it may come as a surprise to learn the actor was heavily involved during revisions of the script. The glasses with no lenses gag was his idea along with the listing of Chinese dignitaries when confronted by Marcus. He also gave his blessing to have the song "I Punched Keanu Reeves" to be written and included during the film's closing scenes.

The actor was a victim of two stalking attempts in 2014. The first involved a woman who broke into his library in a desperate attempt to meet him. A few days later, another woman gained access to his home through an unlocked gate and proceeded to skinny-dip in his pool.

The One and Only

Organized by independent exhibitor Matchbox Cineclub, the first ever KeanuCon- a film festival dedicated to the actor's movie career- was held in Glasgow, Scotland. The festival, which lasted for two days, featured a 10-hour long movie marathon starting with the actor's very first on-screen performance in a short video funded by the National Film Board of Canada.

A philosophy referred to as "No-Way Neo-Duddhism" based on Reeves' films was created by Bo G. According to its founder, the religion emphasizes "Being Excellent to Each Other and Partying On." Much of the philosophy is structured around the hidden symbolism within the actor's movies and reveals enlightenment is found through waking up from "our illusionary understanding of the world."

Who Let the Dogs Out?

Boasting 99 acting credits on IMDB, there's one unlisted role that's quite a head-scratcher. In the 1993 comedy / science-fiction film "Freaked", Reeves plays Ortiz the Dog Boy. As the leader of the Freaks, he's a charismatic half-man / half-dog hybrid who's threatened by the arrival of Ricky.

Reeves made his directorial debut in 2013 with the release of his film "The Man of Tai Chi." Loosely inspired by the life of his stuntman friend Tiger Chen, the film follows a martial arts student's decent into the underground fight club scene. Though the film has mixed reviews, critics praise Reeve's attention to detail and respect when it came to accurately portraying the unique fighting styles.