Bridget Daly
This Parody Instagram Account of Kylie Jenner Doing Stuff Will Shatter Everything You Know About The Youngest KarJenner December 19, 2017 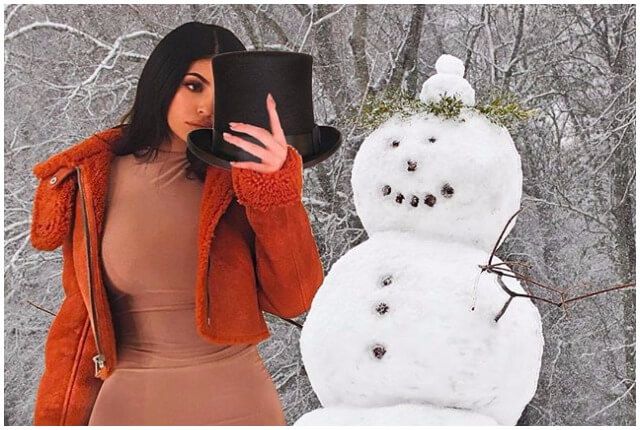 From BrosBeingBasic to Socality Barbie, there are lots of social media niches to see if you need a laugh. But none as hilarious as the parody Instagram account of Kylie Jenner doing stuff.  The youngest KarJenner does so much more than take selfies and pout her lips in front of oversized mirrors. She also keeps herself busy chopping wood for orphans and taking her sick snake to the vet.

No creature, land or sea can defeat the legend that is Kylie Jenner. Just look as how casual she is while fighting off the locking jaws of the feared Great White shark.

To get away from the paparazzi, Kylie Jenner has been known to travel as far as the ice planet Hoth. Fingers crossed she doesn't pull a Luke Skywalker and sleep INSIDE of a Tauntaun.

She Works At Starbucks

Even though she doesn't need the money, Kylie Jenner occasionally works at Starbucks to better relate to her fans. Tbh, we've heard she's great on getting the foam to not deflate on those "secret menu" frappes and making them Instagram-ready.

If you've never seen Kylie Jenner's weird (and funny AF) Vines, then you've truly missed out on a comedy goldmine. Did you know she's a regular on the late-night open mic circuit?

Kylie Jenner rides ostriches to unwind, because riding horses is totally for basic bitches. Forget the Lambos and the Limos, Jenner will surely speed up to the Met Gala 2018 entrance in style.

Even celebs get killer headaches. Here, Kylie Jenner battles a migraine with a massive dose of Asprin.

Kylie Jenner is all about shattering fashion trends to pave the way for new and groundbreaking styles. As demonstrated by flaunting this pirate chic getup, the 20-year-old is clearly not afraid to try anything once.

She Hits The Books

No, she didn't need to go to college to secure a seven-figure income...but that doesn't mean Kylie Jenner is ignorant to the value of a good education. She clearly can't get enough of this science book...I mean, look at that pout!

She Washes Her Hair, Elephant-Style

She Plays The Saxophone

Kylie Jenner is so passionate about the arts that she can't even relax in the sun without turning to her favorite instrument, the saxophone. As is evident by her relaxed pose, she's clearly a natural.

She Donates Her Hair

Just because she wears wigs doesn't mean she doesn't also have those inches, OK? Always selfless and aware of those less fortunate, Kylie Jenner often donates her locks to those in need. After all, she can just get extensions after the big chop.

She's not just a cosmetics mogul, model, and social media star--Kylie Jenner was also an actress on one of the most successful comedy series of all time. Here she is enjoying a big salad with the "Seinfeld" gang at their famed, oft-visited diner.

Is there anything that this 20-year-old can't do? Gold medal in hand, Kylie Jenner accepts the top title for synchronized symming at the 2016 Olympic Games in Rio.

We knew there was a reason why the Kardashian clan always says "bible" when they're referring to an honest truth. Pictured here, Kylie Jenner proudly shows off the good book before heading to her Calabasas place of worship.

Just because she's on track to become a billionaire doesn't mean she'll ignore a good deal when she spots one. Kylie Jenner is all too eager to show off her Bed Bath & Beyond coupon because, hey-- they never expire!

Everyone knows that Kylie Jenner is the queen of Snapchat, but did you know that she is fully trained and capable of delivering babies? Tbh, she'll probably even deliver her own.

She Hides From The Police

Dodging the cops is just another facet of living life in the fast lane. Kylie Jenner shows off her ingenuity under pressure by disguising herself as a lampshade to outrun the law.

She Takes Care Of Her Pet Lion

From Norman to Bambi, we all know about Kylie Jenner's pet roster featured heavily on the decade-long run of "Keeping Up With The Kardashians." Did you know that Jenner also trains and cares for her very own pet lion?

She Wiretaps The President

Kylie Jenner isn't afraid to get political. The makeup mogul is pictured here wiretapping Trump Tower to get the scoop on what really goes down behind those gilded doors. Country first, KarJenner second.

As a soon-to-be mom, Kylie Jenner knows that it really does take a village to raise a child. Here, the youngest KarJenner does her part by chopping wood in a form-fitting bikini.