OK, ‘Riverdale’ Fans, Here’s All The Gossip About the Cast I Learned at PaleyFest for You 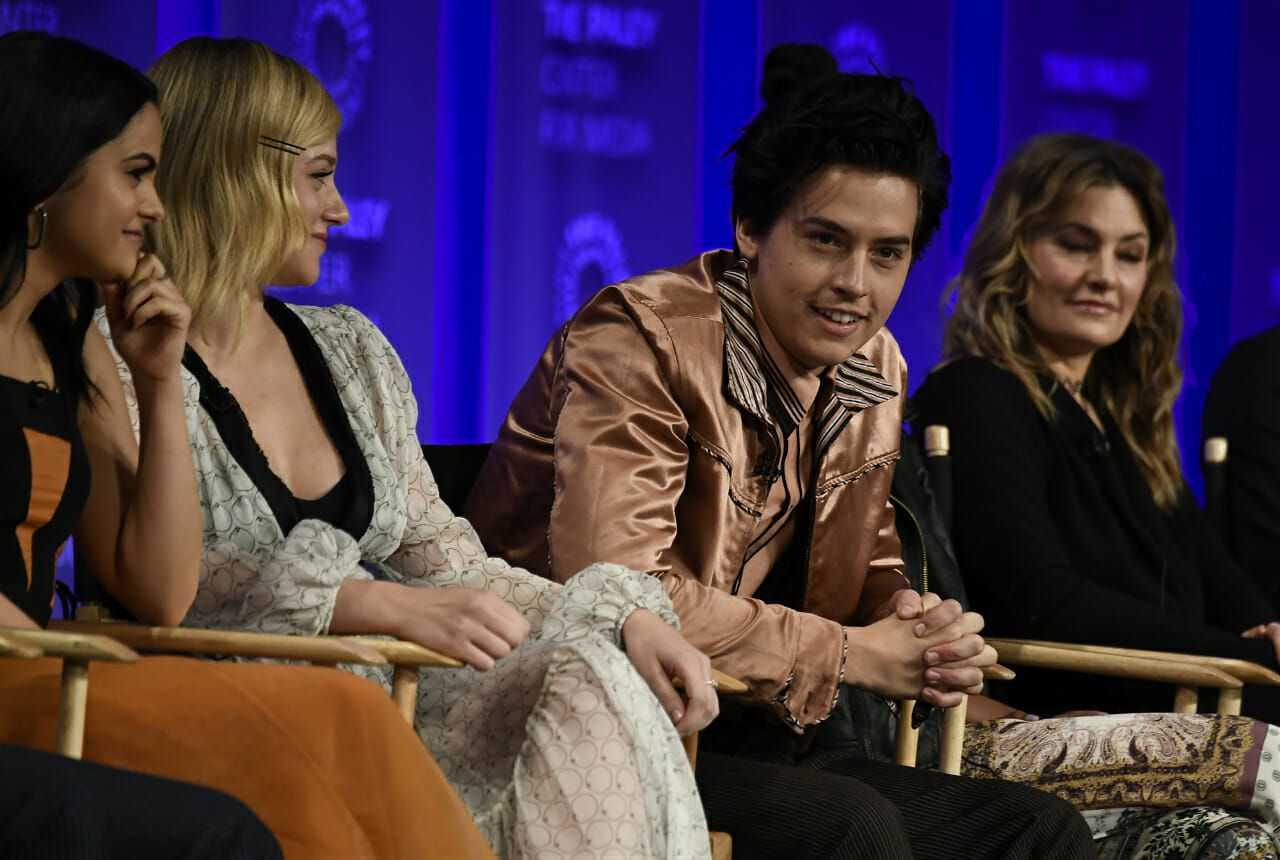 PaleyFest lasts for a couple of weeks, but there was only one show’s panel I really cared about this year. And that’s Riverdale. So yesterday I went to the Dolby Theatre in Hollywood to get you some gossip from the Riverdale PaleyFest panel. First of all, if you heard they screened next month’s musical episode for us, you heard right. I got to see it. But you’ll have to wait a month. And it’s really, really good. I’m very lucky. Sorry for rubbing it in, but it’ll be worth the wait (your wait, not mine). That’s all I’ll say about it, though. No spoilers. After the episode, there was a panel interview and the all-important audience Q&A. So here’s what I took away from the afternoon. 1. I’m shipping Madchen Amick and Skeet Ulrich so hard now. I was already shipping Alice Cooper and F.P. Jones, obviously. (We all are, right? I mean, f--- Hal.) Skeet Ulrich was the first cast member to take the stage, followed by Madchen Amick. When Amick got to her chair, Ulrich motioned for her to sit on his lap, and… she did. The crowd went apes---. And I was a part of that crowd. Look, I don’t know if Amick or Ulrich are married to other people IRL. And I don’t care. I want them to get together. https://twitter.com/emilylongeretta/status/978036412749615106 2. The name that Alice/F.P. shippers have been looking for is “Falice.” That’s straight from Madchen Amick, my babies. 3. Ashleigh Murray stans need to step their game up. When asked if they get recognized around Vancouver, the cast mostly agreed that, yes, they definitely do, especially since they’re often seen together. “You can’t go anywhere,” Camila Mendes said. Then Ashleigh Murray muttered, “Well, I can.” Hey, “Riverdale” fans, what are you doing? Do you not recognize Josie of Josie and the Pussycats when you see her? Ashleigh Murray is a treasure, and I’m not here for fans who don’t show her love. Get your s--- together, “Riverdale” fans. There’s more to this fandom than just #Bughead. For f---'s sake. https://twitter.com/Riverdale_Girls/status/978188591913426944 4. Here's what the cast members eat when they’re on-set. Listen, I’ll be honest with you. The audience questions did not dig deep. But someone asked the cast what their favorite on-set treats are. And there were answers. So I’ll share them with you. Madelaine Petsch: “Nut and seed butters.” Cole Sprouse called Petsch’s diet “hamster food,” which she didn’t deny. One of the cutest moments of the panel was when a fan who brought gifts for the cast told Petsch that she got her a gift card to Veggie Grill. Petsch was delighted. It was pretty adorable. https://www.instagram.com/p/BgypjCRAE6e/ Cole Sprouse: Because the show shoots in Canada, Sprouse has fallen in love with the country's fabled ketchup-flavored potato chips. Another cast member remarked that ketchup chips are “disgusting.” I didn’t catch who said that, but I don’t care because they’re so wrong, their opinion on this matter just doesn’t count. Ashleigh Murray: After Cami Mendes demurred and indicated the cast doesn’t snack a ton because they have to keep their figures, Ashleigh Murray went in. She loves grilled cheeses from the craft services table, and she doesn’t care who knows. Grilled cheese with those little pepperoncinis that make everything taste amazing. I’m so here for Murray’s answer. Call me if you wanna hang out and get some grilled cheeses, Ashleigh. Lili Reinhart: Reinhart likes Chipotle. She told a story about going to a Chipotle in Vancouver where a shook fan who worked there asked, “Are you Lili Reinhart? And Reinhart was like, “Yes.” So the flustered fan goes, “Good luck with that!” Reinhart said she didn’t know what that was supposed to mean. Cole Sprouse said, “I think she meant good luck with the Chipotle.” Then there was a looong, awkward silence. And Reinhart looked pretty embarrassed. It was hilarious.

5. Luke Perry is kinda weird. But in a cute way. Perry’s James Dean-esque persona from his “90210” days has mellowed into a sort of aw-shucks charm. Example: When Madchen Amick revealed the #Falice ship name, Perry said, “Everyone wants Falice,” but didn’t seem to realize what he said when the audience chuckled awkwardly. He also thinks Cheryl Blossom’s uncle’s name is Cornelius. (It’s Claudius.) Oh, Luke. You’re such a dad now. Luke Perry is America’s dad. Luke Perry is my dad. https://twitter.com/meanbean74/status/978036804333977600 6. Cami Mendes wants to get into a fistfight. A fan remarked that Veronica has gotten to punch a couple of different men (Reggie, Nick St. Clair) this season. He asked Camila Mendes if she’s “scrappy” too. She said she’s never punched anyone, but she wants to. Whoa. I wanted to yell, “I volunteer as tribute!” But I didn’t. I kept it together, you guys. 7. Don’t worry about the cast aging out of high school anytime soon. When an audience member asked “Riverdale” creator Roberto Aguirre-Sacasa if he had plans for the show’s characters to graduate from high school, Aguirre-Sacasa said, “I think they’re, like, sophomores.” And then he cracked up at the absurdity of 20-something actors playing 15-year-olds. To which Luke Perry, who played a high-schooler on “Beverly Hills 90210” said, “You can be in high school for a long time on TV.” Because that guy was, like, 37 when he was on that show. (He’s my dad.) 8. The cast loves karaoke. I don’t know what there is to do in Vancouver. Because I’ve never been there. But if you want to catch the cast of “Riverdale” during off hours, start hitting up the city’s karaoke spots. That’s where they said they like to hang out. So what do they like to sing? Lili Reinhart: Lady Gaga Casey Cott: “New York State of Mind” Cole Sprouse: “Mr. Brightside” Ashleigh Murray: Anything. The rest of the cast said she’s the truest singer of the group, and Madelaine Petsch said she has “the voice of an angel.” Aw. 9. Lili Reinhart hates Dark Betty, and she's wrong to feel that way. Wrong. Well, she hates Dark Betty’s wardrobe, anyway. Mostly the wig, which she finds either uncomfortable or unflattering or something. She specifically told Roberto Aguirre-Sacasa not to make her where that thing anymore. And I was like, “Girl, what is you doing?!” Dark Betty is so hot. Sorry. 10. Cole Sprouse and Lili Reinhart: Dating IRL or nah? Here’s the thing: This power couple is such an open secret in Hollywood and among “Riverdale” fans that most of us have forgotten they still haven’t officially confirmed they’re dating. Like, we all know it’s true. But they haven’t told us it’s true. And I want them to tell us it’s true. So do you. So did everyone in the Dolby Theatre this weekend. But one teen had the balls to ask them to their faces. It went like this: FAN: So, Cole and Lili, there’s been a lot of rumors of you guys dating… AUDIENCE: *cheers, can’t believe she’s asking them this* LILI REINHART: *covers her face* COLE SPROUSE: *smirks* REINHART: *looks at Sprouse* SPROUSE: Was that the question or a statement? FAN: *a champion, not backing down* Are you dating? SPROUSE: *slowly lifts his lav mic to his lips, whispers* ...no comment. AUDIENCE: *goes bananas, screams, tears their hair out, rips up the theater seats, total pandemonium* https://www.instagram.com/p/BgyzBShB3sM/ So, no, we didn’t technically get new information here. But from the grin on his face, Sprouse might as well have said, “Yeah, of course we’re dating. You know it, I know it, everyone in this room knows it.”