Where Are They Now? The Cast of ‘Teen Mom’ 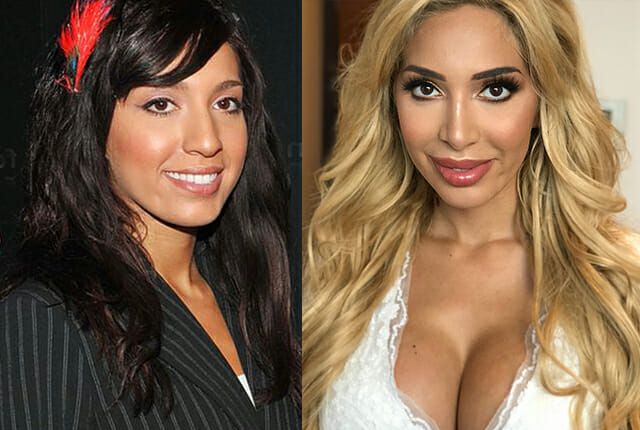 Check out the Teen Mom cast then and now!

When Teen Mom spun off from MTV's 16 and Pregnant on Dec. 8, 2009, viewers fell in love with the series. Original stars Farrah Abraham, Maci Bookout, Catelynn Lowell, and Amber Portwood went through a roller coaster ride, and they didn't do it alone. Their partners and family members went through a lot of drama too. But that's why the show was so addictive. And it was such a hit that it created two spin-offs, Teen Mom 2, and the short-lived Teen Mom 3. Then producers decided to go back and revive the original Teen Mom series titled Teen Mom OG on March 23, 2015. So let's look back over the years and see the Teen Mom cast then and now.

Catelynn and her now-husband Tyler decided to give their first child, "Carly" up for adoption. It was a decision that haunted them throughout the series. Eventually they went on to have a second daughter named Nova on January 1, 2015. Then she and Tyler got hitched on August 22, 2015.

During the show's seventh season, we learned that the "Teen Mom OG" star had suffered a miscarriage, which left her wrecked. She spent several months in rehab trying to get through the emotional trauma, but shortly after rejoining her husband and daughter, she had a relapse and readmitted herself into rehab for the third time. Catelynn was one of the saddest "Teen Mom" teen moms on the show.

Amber and Gary Shirley had Leah, but the pressures of being a teen mom turned her completely violent. She was charged with domestic abuse, which along with a December 2011 arrest related to violating her probation, Amber got sentenced to five years in jail. But she was released early on November 4, 2013 for good behavior.

So where's one of the most troubled "Teen Mom" teen moms today? Things with Gary didn't work out, (duh!) But it didn't work out with her fiancée Matt Baier either. But afterwards she met Andrew Glennon while filming "Marriage Boot Camp," and she got knocked up. Now they're expecting a son together.

After Maci and Ryan had Bentley, they tried making things work, but they were too different and they broke up. For a time, she tried dealing with being a teen mom while getting through high school and eventually, college. She was never one to give up, but she admits that co-parenting with Ryan was a struggle.

Maci had a daughter named Jayde on May 29, 2015 with her now-husband Taylor McKinney. Then she had another son named Maverick on May 31, 2016, and then she married McKinney on October 8, 2016. Today, she helps her hubby with his t-shirt business and filmed an upcoming episode of "Naked and Afraid."

Mackenzie was never on "Teen Mom" until she joined "Teen Mom OG," after being involved with Maci Bookout's ex, Ryan Edwards. However, she was technically a teen mom since she was a teen when she gave birth to son Hudson with her first husband Zachary Stephens. She later filed for divorce on July 2016, claiming that "cohabitation was unsafe and improper."

Today she's the wife of Ryan Edwards, from "Teen Mom OG's".  During the show, we learned that Mackenzie was expecting a baby. But during a heartfelt Twitter conversation with a fan, Mackenzie admits she regrets being one of the "Teen Moms" teen moms: "If I'm being 100 percent honest I regret it every single day," she said.

The "Teen Mom 2" star had tried to make things work with her daughter, Aubree's father, Adam Lind, but it just wasn't possible. So during the show's sixth season, Chelsea got into a custody battle with Adam because he wanted joint custody. The courts eventually allowed Chelsea to keep full custody of her daughter.

Chelsea shared news of her engagement to Cole DeBoer on November 18, 2015. The two had met at a gas station and Cole officially joined "Teen Mom 2" during season 6. On October 1, 2016, the two got married, and by January 25, 2017, the couple had a son named Watson. Now on March 2018, the couple confirmed that a baby girl was due in the summer.

The "Teen Mom 2" star's relationship with her son, Isaac's dad, Jo Rivera fell apart because of the pressures of being teen parents. She found solace in coworker Jordan Wenner during her custody battle. Eventually they felt that for their son's sake, the ex-couple should get along, despite their past drama.

During "Teen Mom 2's" fourth season, Kailyn hooked up with Javi Marroquin and they got engaged fast. Then they married on September 21, 2013. On November 16, 2013, they had a beautiful baby boy named Lincoln, but Kailyn eventually filed for divorce in 2016. Then on August 5, 2017 she gave birth to her son, Lux Russell with friend Chris Lopez whom she also fought over custody for her son.

The "Teen Mom 2" star from West Virginia managed to graduate high school, deal with her ex-husband Corey Simms, and take care of twins Aliannah and Aleeah. They later learned that Aliannah had a rare muscular disease called Titin muscular dystrophy, which seemed to slow down her development. By October 2015, bad performance at school cost her primary custody of her twins, who were reportedly always late to class.

By 2016, the country mom ended her custody battle with Corey Simms. By this point she had already married Jeremy Calvert in 2012, but after having their first daughter Adalynn on February 4, 2013, the couple divorced in 2015. Aside from doing the show, she's focusing on taking care of Aliannah's medical needs.

Jenelle Evans was a heavy party girl like most teens are at that age, but she's proven to be quite unpredictable too. She's gone off on her mom Barbara a few times, but this is most likely related to her having custody of her grandson, Jace. Evans had a few run ins with the law too, which didn't help much, but was so entertaining to watch.

Evans now has three babies. Aside from Jace, she has a son named Kaiser, which she had with her ex Nathan Griffith. She then met David Eason in 2015, and got married in 2017, but not before popping out daughter Ensley in January 24, 2017. Now rumors suggest she might have a fourth baby in the oven.

"Teen Mom" teen moms tend to migrate a lot. Just ask Briana DeJesus, who was originally on "Teem Mom 2," and "Teen Mom 3." Briana DeJesus is from Central Florida and has a daughter named Nova, who was born in 2011. She and her baby daddy, Devoin Austin II eventually split.

Briana joined "Teen Mom 2" in 2017. But that was a difficult year because the MTV star's newborn daughter, Stella had a serious heart condition, which was documented on the show. That didn't stop Briana from focusing on her body, and her own happiness, which is why she got plastic surgery. She also ended a rocky relationship with her ex Javi Marroquin, who wasn't supportive of her decision to alter herself.

The "Teen Mom 3" star and her ex-boyfriend, Matt McCann had a baby in 2011, and they named her Arabella Elizabeth. Matt was in rehab for drug issues, and Alex's mom Wendi told her she couldn't stay in her house unless she put Arabella up for adoption, which she didn't.

Alex has been in a serious relationship with Tim Peters. "Happy anniversary to this amazing man who has done so much for me," she wrote on social media. But since the show "Teen Mom 3" ended, Alex has left the spotlight behind and concentrated more on being a great mom and a great partner to Peters.

Katie starred on "Teen Mom 3" and had a daughter named Molli J. Maes on August 18, 2011 with Joe Maes. But after all the teen drama ended, she practically vanished, but that was because she actually wanted to have a private life, especially after she broke things off with Joey and changed her zip code.

Katie decided to move to Utah to start a new life, and she has managed to accomplish that. Not only did she start dating someone new named Tyler, but the couple were allegedly expecting a baby together, which was due in 2017. But we shouldn't expect many updates since her boyfriend is equally very protective of his privacy.

After disagreements with "Teen Mom OG" producers over an adult webcam series she was on, the former teen mom was forced to leave the show during season 7 in 2018. Her lacking adult film was featured on CamSoda, and fans were left dissapointed to say the least. Farrah claims she was sex-shamed by MTV producers for choosing to pursue a more "adult" path with her career.