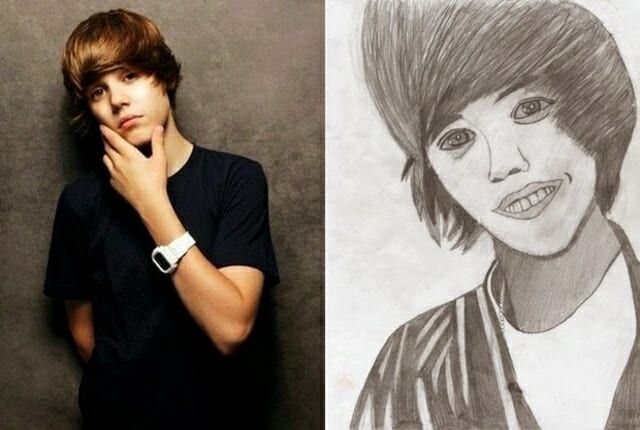 While it's said that a picture paints a thousand words, the only one that comes to mind when checking out this compilation of horribly embarrassing fan art is that sound you make when you're doing dishes and you touch a wet piece of food in the sink. Check out this cringeworthy celebrity fan art hall of fame to see your favorite stars turn from glam to grotesque.

"Cash Me Ousside" girl, aka Danielle Bregoli, aka Bhad Bhabie, had words to say to the fan who drew this portrait of her. When asked on Twitter if she liked it Bhabie responded, "I do not, but I fwu for trying." Ouch.

One of Forbes' "Most Powerful Women," 10-time Grammy Award winner and... amorphous blob? Swift's slim figure and coveted waistline are completely abandoned in this rendition of the superstar. Also, are those mittens, or her hands? Asking for a friend.

Is this a drawing of Elvis with his face melting off, or is it John Cusack? With this twisted (literally) piece of fan art, we can't really tell.

Jolie's famously natural pout was absolutely decimated in this fan drawing. We especially like how they took her sexy locks blowing in the wind and made them look like they're swallowing her whole.

This professional magazine photo of pop phenom Lady Gaga was made to look like someone's Xanga avatar from 2001 in this piece of fan art. Taking the star from moody to haunted-house-ready, they definitely overdid it on the bottom liner.

She's a reality star and runway model known for her good looks, although you wouldn't know it from this fan drawing. How could anyone mess up that signature over-the-shoulder pout?

This collection of fan drawings honoring Daniel Radcliffe, the man who brought everyone's favorite boy-wizard to life definitely don't match his cover shots. From creepy smiles to giraffe necks to having the actor look like a brooding assassin, this collage has it all.

The fan depiction has comedian Adam Sandler looking like he has a serious case of the after-Taco Bell-cramps.

Arguably the most famous botched fan art of all time, this side-by-side is the OG "you vs. the girl he tells you not to worry about." Poor RiRi. Even Fenty Beauty couldn't fix this poorly drawn face.

Admired for her sharp wit and perfect jawline, Emma Watson looks like her best features were run through a blender in this fan drawing. Also, exactly what is going on with her neck?

While his most famous character sparkles when he hits the sun, this drawing makes it look like R. Patts is locked in a basement somewhere. Come on, we know he's British, but his teeth aren't THAT bad.

Action star, scientologist, couch-jumper and... boneless wonder? In this fan pic, the rules of anatomy are thrown out the window and Tom is drawn with completely fluid arms and sans elbows.

Justin is definitely NOT bringing sexy back in this fan picture. With a face that looks like it's straight out of a Picasso painting, this drawing doesn't capture Timberlake's signature smolder. Not at all.

Poor Ross. Along with a less-than-blockbuster acting career following the cancellation of "Friends" (voicing Melman from the "Madagascar" series nonwithstanding), David Schwimmer has to put up with this depiction of his famous face as well.

One-fifth of boy band The Backstreet Boys, Nick Carter is no stranger to making girls swoon. However, in this high-belted fan-depicted outfit, Nick's fans definitely don't want it that way. Also, what's with the middle seam?

Ouch. He's known for stealing the Declaration of Independence, not for a pair of lips sliding sideways off of his face.

This fan made Eddie Murphy's signature gap seem like it was the result of a lifelong battle with gum disease. Sorry, Dr. Dolittle.

While gracing Zayn with certified #SkunkHair, this terribly shaded fan art also gave us countless memes of the boy-bander shocked by his distorted reflection. TBH, we'd be terrified if this particular fan depiction wanted some "Pillowtalk."

To be honest, we wouldn't even know this was Hazza if it wasn't featured on a Tumblr dedicated to boy band 1D. We can't pick our favorite part of the drawing, but it's either his eyebrow that completely disappears behind his hair, or the pool-noodle neck.

Harry Styles' angelic face seems to inspire the most (bad) fan art in the celebverse. With overdrawn lips to put Kylie's to shame, teeth the size of your thumb, and Voldemort's nose, this homage to the "Sign of the Times" singer is doing the most.

We don't think any girl would let new dad Liam Payne "strip that down" with a head that looks like the gum on the bottom of your shoe. If you can't tell who it is by the dark blue, very prominent mole on his neck, don't worry: This fan wrote "LIAM" on the drawing just so there'd be no confusion.

The "Back To You" singer wouldn't have legions of teenage fans professing their love on Twitter if he looked like this drawing. Complete with unibrow(we think that's what that in the middle) and eyes that make him look like he's coming off of a three-day bender, this look is not "tres gorgeous."

Irish pop star and "Slow Hands" singer, or demon with flames for hair and razor-sharp teeth? You decide.

Kim Kardashian West has admitted to having some work done, but there's not enough cheek filler in the world to give the reality star this waterlogged look. We can't look away from the mutton-chop vibe her drawn-on contour is giving off either.