Camila Villafane
The 22 Most Uncomfortable Moments Ever to Happen on TV Talk Shows February 12, 2019 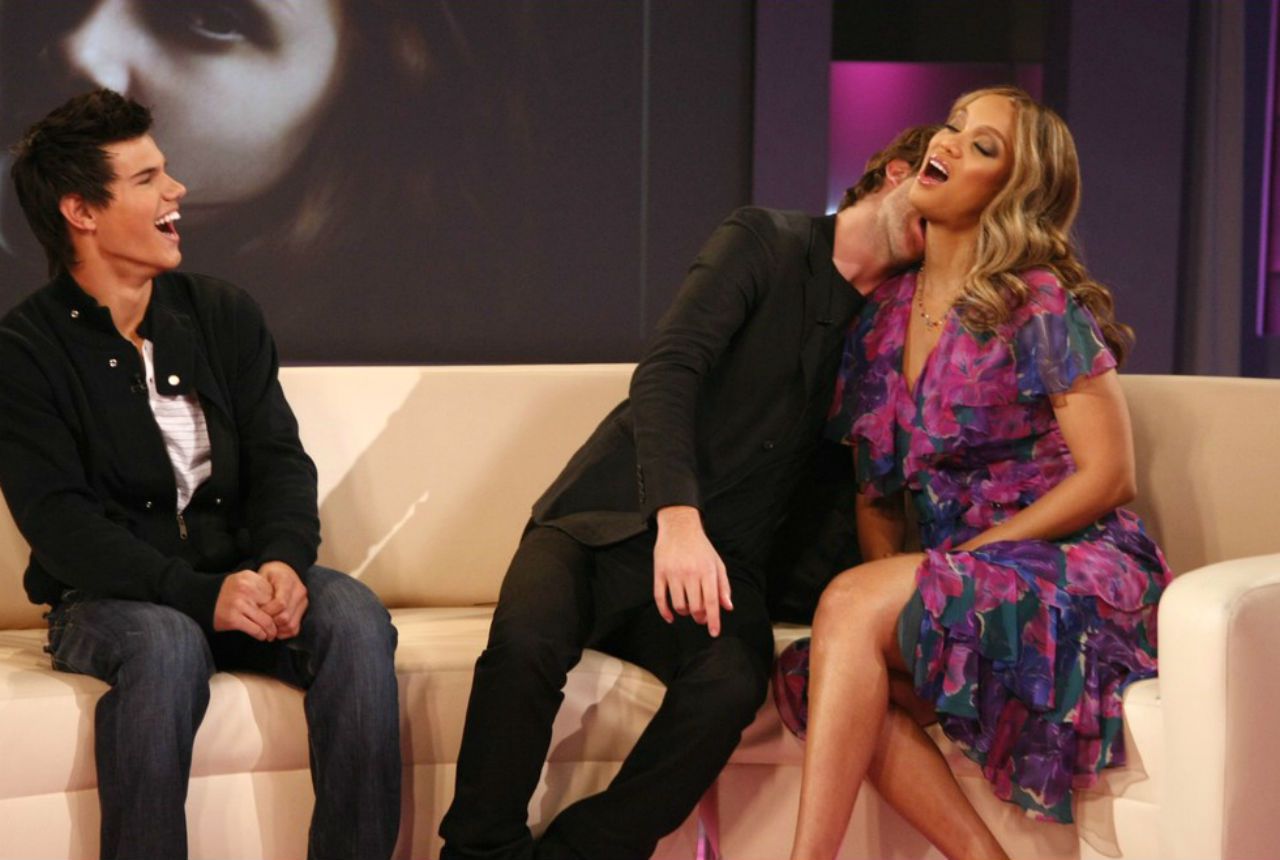 Everyone knows how talk shows work. Guests walk on stage, wave at the audience and then chitchat with the host. But sometimes, things go horribly wrong. And uncomfortable talk show moments like the ones on this list turn into unforgettable OMFG moments.

In 2017, pop star Katy Perry went on Ellen to play “Will You Perry Me?” Before the game began, Perry asked “Do I have to get married? Again?” to which Ellen replied, “You were not married.” But Perry quickly reminds her that she was actually married to Russell Brand. Ellen couldn't do much but giggle and laugh because she absolutely forgot. To make things even more awkward, Perry asked Ellen, "Remember you gave me some wedding gifts on the show?"

During a live broadcast of the “Wendy Williams Show,” Williams stumbled, raised her hand to her head and fainted while dressed in a Statue of Liberty outfit for a Halloween segment. She came back minutes later to finish off the episode. But talk about embarrassing! Luckily, she ended up being just fine.

Joaquin Phoenix Tunes Out On Letterman

Actor Joaquin Phoenix was invited on the “Late Show With David Letterman” on February 11, 2009. When Letterman pointed out that Phoenix looked different since the last time he was on the show, Phoenix totally spaced out like he was on something. As it turns out, Joaquin was doing an elaborate piece of performance art, but no one told Letterman. It was all nothing but an act, and now Phoenix' interview is nothing but gold.

In 2007, Tyra fell out of her chair after a porcupine was introduced as an animal guest on her less-than-successful talk show, "Tyra." The statuesque model had a bit of a meltdown and freaked out. Then she tried to get away. But when she climbed on top of the couch, it fell over on top of her. Awkward.

Tyra Foams At The Mouth

Tyra admitted that she got bit by a dog with rabies while jogging in her neighborhood on a truly unnecessary episode of "Tyra". Then suddenly, she started foaming at the mouth, getting on all fours and then barking like a dog. She even pretended to bite a few confused audience members. But it was all part of her “pranks” episode. Yeah, we have no words either.

Being weird is comedian Andy Dick’s signature brand. But in 2007, he was sitting next to Ivanka Trump during an appearance on “Jimmy Kimmel Live,” and he couldn’t keep his hands off of Ivanka. He even went as far as touching her leg. That's next level crazy, even for Andy Dick standards.

Cruise Out Of Control

In 2005, Tom Cruise called Matt Lauer a glib, which is someone who speaks fluently but often in a deceptive manner, while appearing on the “Today” show. Then Cruise went on a condescending rant about the history behind psychiatry. But it’s not the first time Cruise lost it on a talk show host. Oh no. While this interview was almost painful to watch, Cruise took it up a notch when he was interviewed by Oprah.

That same year, Tom Cruise appeared on “The Oprah Winfrey Show” to reveal that he was very much in love with Katie Holmes. Like, really in love. Then he started jumping on her couch like a madman, and you could almost sense the confusion in Oprah’s heart. This quickly became one of the most uncomfortable talk show moments for Cruise, but for us? Well, let's just say that reality TV is the gift that keeps on giving.

It Snuck Up On Jen Garner

Jennifer Garner must have felt pretty silly when she appeared on Conan O’Brien, after she argued with him that “snuck” wasn’t a word. So, O’Brien pulled a dictionary out from under his desk and proved to her that it was. Awkward!

What’s That On Your Face?

While interviewing New Orleans Saints quarterback Drew Brees, Oprah’s maternal instincts kicked in when she saw some odd substance on his face. Oprah asked Brees, “Who just kissed you?” and quickly tried to wipe it off, but didn’t realize it was Brees’ birthmark. Oops.

In 1988, Geraldo Rivera invited Nazis to his classic talk show “Geraldo.” No, seriously. Someone actually pitched this idea and it got the green light. But along the way, things got very tense between a black guest who confronted one of the Nazis, (who didn't see that one coming?) This lead to an all-out brawl. Then another Nazi headed straight for Rivera and broke his nose while trying to punch his lights out. What the heck was he thinking?

My Girlfriend’s A Dude

The “Jerry Springer” show is no stranger to awkward moments. But things took a strange turn when Springer introduced Jobie and Brad, a couple who met on MySpace. But Jobie confessed that she was a guy, and then, Brad admitted he was up to trying anything once. And people still think the show is fake!

During a 1994 appearance, the queen of pop decided to say a lot of things that were definitely not safe to say on a TV show, not even on the “Late Show with David Letterman.” There were a couple of cuss words thrown here and there, but she’s a music goddess so we forgive her.

Kimberly Rydzewski quit cycle 10 of America’s Next Top Model because her boyfriend had ended his own life. Then she went on Tyra’s talk show to talk about what happened in more details. Sadly, Kim herself was in too much pain and is no longer with us either. But a lot of people considered Tyra wasn't really as empathetic as she wanted to portray herself as, and the whole thing ended up being a major cringefest.

While appearing on Ellen in 2017, Jessica Simpson was slurring and out of breath while she talked about things like mermaids not being allowed to pee on her kids and the definition of manhandling. Meanwhile, poor Ellen could barely keep a straight face through it all.

In 2016, 13-year-old Danielle Bregoli appeared on the Dr. Phil show. She had a bad attitude and a mouth on her that made viewers want to scream at their TV set. So when an audience member laughed at her, Bregoli shouted “Cash me outside, howbowdah?” But no one understood her thick street accent. Now, she’s a freaking music celebrity, so that awkward encounter on Dr. Phil really paid off.

Kathy Griffin Bares It All

Kathy Griffin is no stranger to pushing the envelope. Her weird behavior got Griffin banned from the “ Late Show with David Letterman” for using foul language. But years later, he brought her back, and she creeped Letterman out by undressing in front of him.

During a 1995 interview, Drew Barrymore decided to show the talk show host how liberal she was by flashing Dave on the “Late Show with David Letterman.” But given how much she’s cleaned up her act, it’s hard to imagine that the girl was ever a total mess back then.

Tyra Got Excited Over Vaseline

Tyra may have taken uncomfortable talk show moments to a whole new level! While promoting the first “Twilight” movie, Tyra not only faked a horrible British accent to impress Robert Pattinson (aka Edward Cullen), but she asked him to bite her. Oddly enough, he went ahead and did it.

Haley came to the Dr. Phil show claiming she was pregnant with baby Jesus. Then again, she also believed she was an “American Idol” contestant and that her dad was Eminem. Dr. Phil took her story seriously and referred her to a psychiatric facility...which is what any doctor would've done the second they met Haley.

Crispin Glover, aka, Marty’s dad on “Back to the Future,” rambled and stuttered during a painful 1987 appearance on “Late Night with David Letterman.” But things got even weirder when Glover challenged Letterman to an arm-wrestling contest and instead of playing along for the cameras, Letterman simply walked out.