These Viral Rappers Are Stars, But Do They Have Bars?

Greg Smith
These Viral Rappers Are Stars, But Do They Have Bars? June 3, 2019Leave a comment 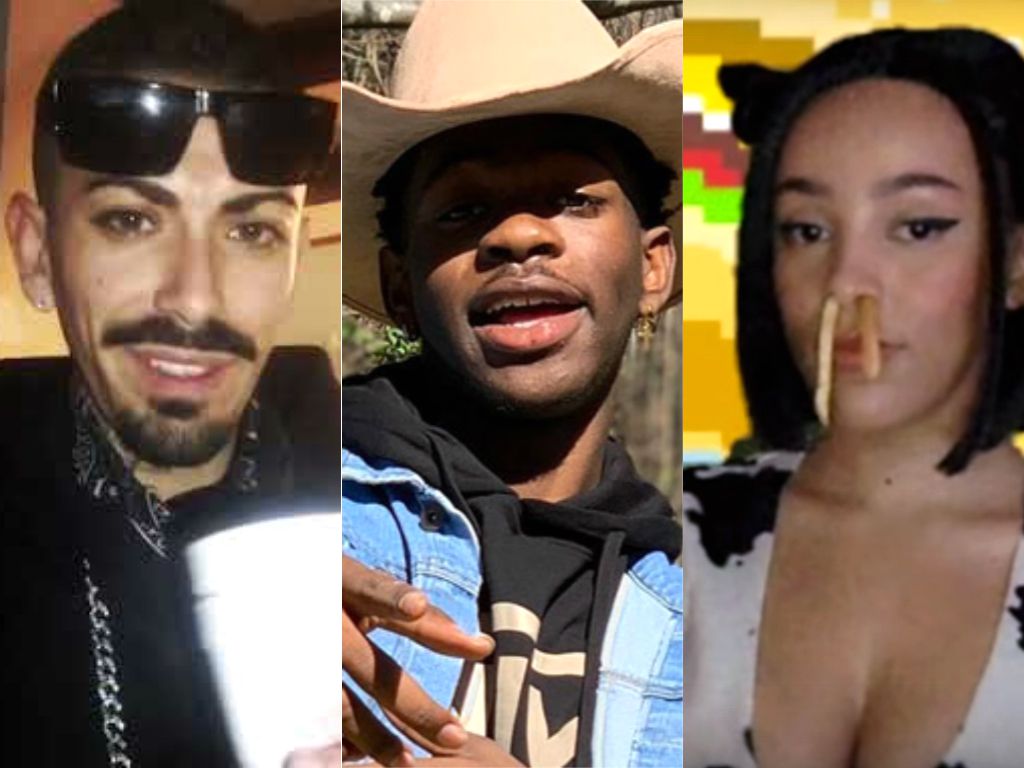 For some, viral rappers who vault to the top of the hip-hop scene can't actually rap for s---. To others, their online fame represents the democratization of talent. What's the truth? Let's get into the flow of these infamously viral rappers and find out...

David "Lil Dicky" Burd didn't live a life that intuitively led to rap stardom. After graduating from college with a business degree, he worked for an advertising firm, dreaming of life as a comedian and actor. When he fused his comedic talents with hip-hop he broke through. His debut mixtape, "So Hard," recorded while he kept his day job, spawned a series of viral music videos, combining earnest hip-hop talent with irreverent comedy.

Lil Dicky is a curious figure because he's not quite a pure comedy rap act like the Lonely Island, and he's not quite a purely serious rapper like Childish Gambino. He plays the viral video game expertly, with meta-narratives like "Save Dat Money" cutting through the noise. But Rich Homie Quan has the best verse on the track (until Dicky himself cuts it off). Would Dicky's work be better if he stuck to one lane? Or is the mix of comedy and bars the perfect alchemy for his success?

What happens when the Internet machine grabs your work and does what it wants with it without your consent? What happens if they make fun of it? Laugh at it, instead of with it? If you're The Boyboy West Coast, a rapper with an admittedly unique flow, look and personality, you take the fame and recontextualize it yourself. Refocus the laugh. Make it positive. He, perhaps more than any other rapper on this list, is indicative of our contemporary relationship with hip-hop and the Internet.

A clip of The BoyBoy West Coast lip-syncing to his own song, "U Was at the Club (Bottoms Up)," with its heavily auto-tuned vocals and distinctive beat, was one of the first true memes to come from TikTok. The apps users locked onto the clip, recreating it, parodying it, and even dressing up like Boyboy West Coast, turning him into a viral viral. Soon, the Santa Barbara rapper released a full version of the track on Spotify, and an official music video followed.

Amala "Doja Cat" Dlamini had an upbringing full of diverse interests and artistic expressions. Her father is a multi-talent of the South African film industry and her mother is a painter. Doja Cat's music blends genres and aesthetics, combining elements of modern trap with jazz and melodic soft rock. It all gets a high-gloss, online-culture coating.

"Mooo!," aka "Bitch, I'm a Cow," which propelled Doja Cat to viral fame, might be the perfect encapsulation of what makes her an interesting artist. The lyrics are silly and the video's chroma key effects are (deliberately) bad, but the on-purpose lo-fi qualities are crucial to the song's hilarious charm. More importantly, the beat slaps, and Doja Cat's flow is smooth as silk.

Johnathan "Blueface" Porter, like 2 Chainz before him, had a promising career as a college athlete before giving it up for the rap game. Choosing his unique moniker due to his association with the Crips, Blueface started releasing tracks in 2018, earning attention with his off-kilter appearance and offbeat flow. That's not a dig. His flow's often literally not on-beat.

If you're going to make music that's literally not in time with the music around you, you're going to make an impression. Blueface's impression is largely positive, evident in viral hits like "Thotiana." You sometimes wish Blueface would rap a little more traditionally when the song demands it. But you can't deny the impact he's making.

Danielle 'Cash Me Outside' Bregoli

"Cash me outside, howbow dah?" With those immortal words spoken on "Dr. Phil," 13-year-old Danielle Bregoli became an instant Internet star. Brought on the show by her mom, Bregoli was meant to serve as a cautionary tale of delinquent behavior. Instead, her personality and catchphrases spread across the pop-culture landscape as ready-made memes. Still, that should've been it for the Cash Me Outside Girl. But a music career was soon to follow...

Bregoli rebranded herself as Bhad Babie and released aggressive trap singles like "Hi Bich" and "Gucci Flip Flops." Many were skeptical when the girl from "Dr. Phil" started making music, but the then-14-year-old Bhad Bhabie became the youngest female rapper to crack the Billboard Hot 100 charts. She also earned support (and credibility) from rappers like Lil Yachty and YBN Nahmir. Her flow is right in the pocket of her contemporaries, and her beats rattle speakers. Against all odds, "Cash Me Outside Girl" is fading into memory as Bhad Bhabie's music career heats up.

Tierra Whack (her real name) began performing at a young age. She went to a performing arts high school and sang the finale of "Sister Act 2: Back in the Habit" at her showcase, performing the rap verse. She released a few tunes as Dizzle Dizz, but it wasn't until she reverted to her real name that she started popping, with a curious sound bolstered by bizarre visuals in tracks like "Mumbo Jumbo."

Whack's debut album, "Whack World," is 15 tracks long. It's also 15 minutes long, with each track clocking in at exactly one minute. And they all slap. Whack deliberately adhered to social media trends, timing her songs to the length of an average Instagram video. As a result, "Whack World" is all killer, no filler. Each tune delivers a catchy hook and one dope verse before politely f---ing off. And the accompanying visual album is chock-full of bonkers imagery that demands your attention.

In some ways the prototypical viral rap star story, Odd Future Wolf Gang Kill Them All, aka Odd Future, was an incendiary rap collective that shattered everyone's expectations and perceptions in the early 2010s. De facto leader Tyler, the Creator guided the group through violent lyrics spit over unorthodox beats. The group developed an Internet omnipresence with their queasy visuals running wild on Tumblr and Twitter.

We'll be blunt: A lot of Odd Future's music produced in their early days is hard to stomach. The rappers casually toss off lines riddled with homophobia and sexual violence. While the craft is undeniable, the content demands to be denied. And yet pieces made in that period, like "Yonkers," serve as 2010 masterpieces of hip-hop and filmmaking, foreshadowing the era of "artist as multimedia brand."

OFWGKTA doesn't really make music together anymore. But the major players of the group have grown and achieved creative peaks solo. Beyond Tyler, the Creator, other acclaimed artists who got started with Odd Future include Earl Sweatshirt, Frank Ocean and The Internet. All of them are making some of the most interesting hip-hop music we've got today.

Here's an irresistible narrative for you: The Higher Brothers are from China, where much of Western culture is forbidden and heavily censored. But these four guys loved the culture so much that they began bootlegging and smuggling in whatever hip-hop content they could get, right under the Chinese government's nose. Their resulting viral fame is global by necessity.

Hooking up with American media company 88rising, which dedicates itself to cultivating Asian artists, Higher Brothers started releasing music videos that showcased their hybrid of styles. While folks who don't speak Mandarin or Sichuanese may not be able to appreciate their bars in full, their musicality and voices transcend language barriers. If you dig Higher Brothers, check out other 88rising artists like Rich Brian, Keith Ape and Joji.

Jonathan "DaBaby" Kirk comes to us from Charlotte, North Carolina, with a fully formed artistic point of view. Nah, just kidding. DaBaby gives us junk food presented in the perfect package. And we mean that as a sincere compliment. His bars alternate between violent boasts and juvenile silliness. But don't turn your brain all the way off. because DaBaby's rhythm and flow switches will sneak up on you.

His sense of humor catapulted DaBaby from hip-hop obscurity to Internet fame. In his music videos, he combines the silliness of '90s artists like Busta Rhymes and Hype Williams with a modern sense of vulgarity and violence. His shenanigans aren't just limited to the screen, though. He's been known to perform concerts in a straight-up adult diaper.

Formed in the early 2010s through, of all things, a Kanye West fan forum, Brockhampton sought to redefine everything folks thought about hip-hop. Under the vision of leader Kevin Abstract, Brockhampton was known right out of the gate as a "boy band." And they made music dedicated to shattering norms about sexuality, race and mental health in hip-hop.

Taken from their "Saturation" trilogy of albums, "Gold" sums up everything unique about the group. Its video has a specific aesthetic it shares with other videos from the "Saturation" trilogy. The group's vocalists share responsibilities without ego. Leader Kevin Abstract sings only the hook, but he doesn't sound unhappy about it. The track splits the difference between earnest confessions and radio-friendly bounce.

In videos like "Shoot" and "Rover," BlocBoy JB invented a dance called the "shoot," although a lot of people know it as the "Fortnite" dance. The makers of that game lifted BlocBoy JB's unique moves for their characters' celebratory dance, but BlocBoy JB didn't see a dime or an ounce of credit. He's currently embroiled in a lawsuit over it, but that hasn't slowed his career. Take a look at "Look Alive" featuring Drake to see the future this young talent could have.

Normally, a musical artist grows to acquire fame. For Montero "Lil Nas X" Hill, it was the exact opposite. He started as a pure Internet personality, posting interactive stories on his Twitter that achieved levels of notoriety (including one about surviving a school shooting). Soon, his fans encouraged him to begin making music. And he went for it, courting controversy in the process.

"Old Town Road" is a curious hybrid of country and trap in which Lil Nas X uses the popular half-sung-half-rapped wave flow with an over-the-top drawl. It blew up on both the hip-hop charts and country charts. Then Billboard removed it from the country charts, claiming it wasn't country. For our money, it absolutely is a hybrid of the two genres, and Billboard's move is questionable at best, and probably racist. None other than Billy Ray Cyrus co-signed Lil Nas X's iconoclasm by appearing on the remix.