The Weirdest Celebrity Red Carpet Fashion Of All Time 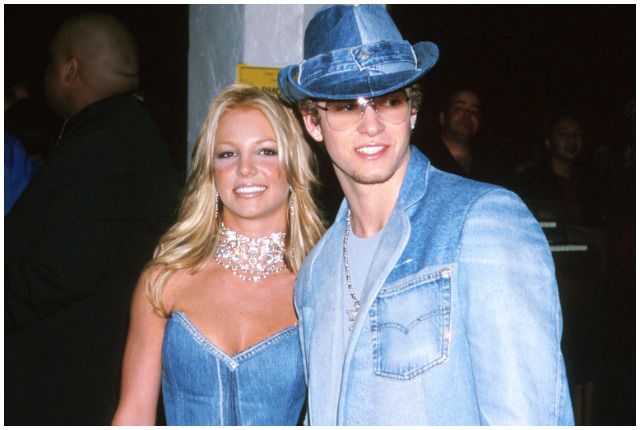 For every avant-garde, Comme des Garcons look Rihanna has slayed, there's a celeb who feels confident enough to wear a Canadian tuxedo. Like, even on the red carpet. And sometimes, those overconfident stars even come in pairs. (Yes, I'm talking about you, 2001 Britney and Justin.) Whether facing paparazzi while their stylist was on vacation, or just daring to try something new, these stars made headlines. But they made headlines for all of the wrong reasons. So take a break from wondering, "What were they thinking?" And, instead, enjoy this ultimate collection of the wildest, weird red carpet outfits we've ever seen.

Ellie Goulding must have stopped by the 2018 BRIT Awards on her way to an '80s-themed business meeting because that's the only situation that would explain the singer's ENORMOUS shoulder pads. Accented by a plunging neckline and sleek black heels, the 31-year-old singer did manage to make a statement with her attire--that there is definitely a reason why shoulder pads went out of style. Note to Goulding--not all fashion is cyclical.

While Jaden Smith is definitely "just an icon living," his status as a trendsetting tastemaker definitely took a hit after the 2018 Grammy Awards. While we're definitely digging the wraparound chain, the multi-pattern patched jeans leave much to be desired. However, this is the same young celeb that wore a dress to the prom--what did we expect?

With a nod to Britney Spears and Justin Timberlake's 2001 American Music Awards denim disaster, Katy Perry and rapper Riff Raff teamed up to serve this serious statement at the 2014 Video Music Awards. While Riff Raff sported dreads instead of a denim hat, Perry rounded out the look with a bedazzled bag similar to Spears' accessory. The Canadian tuxedo was simply a look so nice, it had to be done twice.

The bizarre gold outfit that singer CeeLo Green sported at the 2017 Grammy Awards was the ensemble that sparked a thousand memes. With a metallic gold dress accented by matching face paint, Green managed to wow A-list onlookers and forever secure his place in red carpet history. Tbh, we totally wish we could say "Forget You" to this fashion disaster.

The Worst Of Celebrity Red Carpet Fashion: The Wild, The Weird And The Just Plain Ugly

Two years removed from her 2013 MTV Video Music Awards twerk-athon, Miley Cyrus arrived at the 2015 ceremony in an outfit that left little to the imagination. Rocking a silvery Atelier Versace number that barely covered her body, Cyrus was confident in showing the world once more that she was NOT Hannah Montana. We can't decide which part is more jarring--the nipple-covering overalls or the chandelier-beaded micro skirt?

Rapper Lil Mama definitely got her key demographic mixed up at the 2007 MTV Video Music Awards. Rocking a distinct Little Bo Peep-meets-toddler style vibe, the "Lipgloss" rapper even accented the look with a bedazzled pacifier. Belted tunic aside, we're definitely digging the sparkly sneakers and leggings.

There's so much going on, we don't know where to start with the erratic outfit Pink wore to the 2000 MTV Video Music Awards. Pairing incredibly low-cut capris with a questionable faux fur cape, the singer-songwriter rounded out the bold look with a pair of platform sandals. Nothing says high fashion like exposed feet...right?

Country singer Faith Hill clearly isn't a fan of subtlety. In honor of her "Somewhere Over The Rainbow" performance at the 2002 Academy Awards, Hill rolled up to the red carpet in a gown that looked like a box of melted crayons. Note to Faith Hill--just because you're singing about the rainbow, you don't have to LOOK like the meteorological phenomenon.

While singer-songwriter Christina Aguilera's "Dirrty" era granted the fashion lookbook of the early-aughts with a number of memorable additions, her 2002 MTV Video Music Awards Outfit is by far the most...questionable. Turning a see-through scarf into a sling for her breasts and strutting her stuff in a micro-mini denim skirt, Aguilera rounded off her edgy look with striped hair and a chain belt. Paired with her overly-lined lips, this "outfit" is one fashion critics won't soon forget.

We're not quite sure what angle comedian Sarah Silverman was going for with her outfit selection for the 2018 Grammy Awards. With a dress that looks like it was picked off of a department store clearance rack highlighted by a chunky pearl choker, Silverman cut an impressive figure while strutting the red carpet in her studded boots. Don't even get us started on the fishnet tights...

Equally criticized and praised for her risky fashion choices, pop star Lady Gaga  ramped up the "shock factor" of the 2010 Video Music Awards by walking the red carpet in a dress made of actual raw meat. Speaking to Ellen Degeneres soon after her outfit made headlines, Gaga explained the rationale behind the daring dress. "If we don't stand up for what we belivve in, if we don't fight for our rights, pretty soon we're going to have as much rights as the meat on our bones," said the "Poker Face" hitmaker.

Rapper Nicki Minaj definitely tapped into her animal side for the 2013 Grammy Awards. If the thigh-high leopard boots and matching dress weren't enough, Minaj topped off the look with an animal-print headband and striped wig. Checking out this outfit, we now understand one of the most crucial rules of fashion--less is more.

Clearly the upper management of the 2002 Oscars lifted their "no shirt, no bra, no service" rule especially for actress Gwyneth Paltrow. Tapping into her goth side to pull off this Alexander McQueen number, Paltrow must have failed to check out how her chest would photograph under the near-constant flash of the paparazzi. Paired with the shapeless velvet skirt, this look is undeniably a fashion fail.

Is that a trash bag, or is it the dress Tilda Swinton wore to the 2008 Academy Awards? With a super lean 5'11" frame perfect for the "tall and slim" look favored by most red carpet designers, Swinton instead chose to strut her stuff draped in a shapeless, velvet number. Maybe she was angling for comfort over style in a pre-Beyonce "I woke up like this" world?

If there was a memo passed around Hollywood in 1999 that bejeweled nipple pasties didn't count as an outfit accessory, someone definitely forgot to give rapper Lil' Kim her copy. Strutting her lavender jumpsuit with the swagger of someone who DOESN'T have her breast out on full display on the MTV Music Video Awards red carpet, Lil' Kim clearly wasn't ashamed of showing off her toned physique. Our favorite part? Her matching hair, of course.

Actress Rose McGowan bared it all on the red carpet of the 1998 MTV Video Music Awards. Donning a barely-there leopard print thong and a see-through beaded dress, McGowan was clearly a supporter of #FreeTheNipple long before the campaign earned an official name. Despite the questionable artistic merit of the outfit, hats (and tops) off to McGowan's confidence!

Back in 2001, Britney Spears and Justin Timberlake (the then-princess and prince of pop music) rolled up heavy to the American Music Awards. Sporting matching denim outfits and bedazzled denim accessories, Spears and Timberlake unknowingly solidified their spot in fashion horror history. They CAN be forgiven, however--they were both only 19 at the time.

No fashion faux pas collection is complete without the inclusion of Icelandic singer-songwriter Bjork's bold choice at the 2001 Oscars. Dubbed the infamous "swan dress," the Marjan Pejoski creation is now revered by critics and even earned a slot in a retrospective at the Museum of Modern Art. Not pictured, however, are the six ostrich eggs Bjork scattered around the red carpet after her arrival.

Apparently, the shock and honor of getting nominated for an Academy Award was enough to make iconic singer Celine Dion lose all sense of style. Rolling up to the 1999 Oscars after bagging a "Best Song" nomination for her hit "The Prayer," Dion was decked out in an all-white outfit completed by a backward tuxedo jacket. Our favorite part? The slanted hat and sunglasses, of course.

In a look that gives off some serious I-love-black-Duct-tape vibes, Miley Cyrus rolled up to the amfAR Inspiration Gala rocking this outfit straight from a bondage scene. While the Tom Ford piece seems much better suited to the runway than the red carpet, Cyrus clearly had no problem flaunting her exposed torso. Side boob aside, the selection needs some seroius work.