Bridget Daly
The Ultimate Guide To Everyone Who Has Ever Dated A Kardashian Or Jenner October 23, 2017 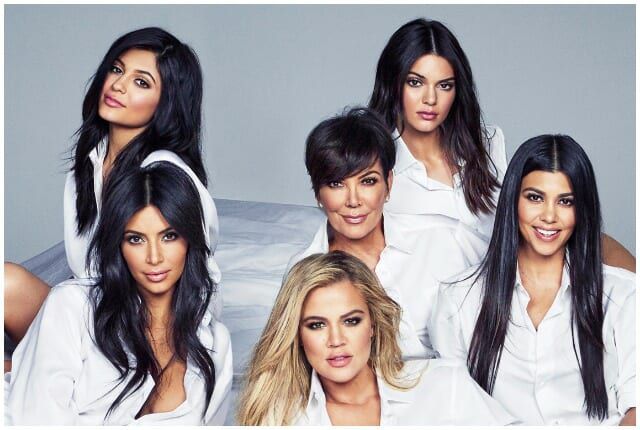 The Kardashians and Jenners know exactly how to live life in the spotlight. As a result, they look equally good on the red carpet and in prison. And with their #GlamSquads and cosmetic procedures, they have the bodies and bank accounts to snag the best romantic partners. So here's the ultimate kollection to everyone who has dated a Kardashian or Jenner, from Jaden Smith to Yeezy.

Blac Chyna and Rob Kardashian’s drama-filled relationship was caught on camera during filming for "Keeping Up With The Kardashians," cataloguing the countless temper tantrums that led to them calling it quits (and then reconciling days later). The two parted ways for good in early 2017.

Rob Kardashian dated British singer Rita Ora from November 2011 to December 2012. Always one to air his dirty laundry on social media, Kardashian put Ora on blast, stating that her infidelity was the reason behind their split. “She cheated on me with nearly 20 dudes while we were together,” he said.

You can’t watch an episode of "KUWTK" without getting wrapped into the tumultuous on-again-off-again romance between Kourtney Kardashian and Scott Disick. The two dated for eight years, from 2007 to 2015, and have three children together.

Looking for LA’s latest love triangle? Kendall Jenner, A$AP Rocky and NBA player Blake Griffin have got you covered. Kendall has been spotted out and about with Griffin numerous times since August 2017, a shift in loyalties that caught on-again-off-again beau A$AP Rocky off guard.

Kendall Jenner "definitely" dated the “Goldie” rapper A$AP Rocky from July 2016 to August 2017. Their relationship is one of Jenner’s longest romances to date, despite the fact that the two have never publicly confirmed their involvement. Are they still linked? Come on KJ, we need to know!

Kendall Jenner and NBA player Jordan Clarkson dated for nine months, from April 2016 to January 2017. While dozens of paparazzi pics of the two sharing meals and attending events together were published, a source close to Jenner revealed that the relationship never got serious.

Kim Kardashian’s first boyfriend at age 14 was none other than Michael Jackson’s nephew, TJ Jackson. Kim dated the singer for four years, from 1995-1999, and he was even her date to her senior prom.

Kim K isn’t the only Kardashian who once dated a member of the famous Jackson family. Kourtney Kardashian dated Taryll Jackson for three years, from 2001 to 2004.

Kendall Jenner’s most public romance was with none other than former One Directioner Harry Styles. While their first romantic tenure only lasted three months in 2014, the pair rekindled the flame on a 2015 shared Carribean vacation. Despite their chemistry, the two finally called it quits in 2016.

Of all the KarJenner brood, supermodel Kendall Jenner is definitely the most guarded when it comes to her love life. She was linked to pro-footballer and school friend Julian Brooks for 10 months back in 2012. Brooks’ infidelity was allegedly the reason behind their split.

Just like Kylie, Khloe Kardashian is locking down her current beau with a surprise baby announcement. NBA player Tristan Thompson and Khloe Kardashian started dating in September 2016 and are still going strong, with the reality star constantly traveling to be with her man during the NBA season.

Khloe Kardashian definitely has a type: NBA players. Following her breakup with French Montana, Kardashian was linked to James Harden for eight months in late 2015 to mid 2016. Harden revealed to Sports Illustrated that their relationship was the “worst [almost] year of his life.” Ouch.

Khloe Kardashian and rapper French Montana got hot and heavy on “Kourtney and Khloe Take The Hamptons.” The two went their separate ways after only five months of dating, as Kardashian allegedly was ill-equipped to enter another relationship after her separation from Odom.

Khloe Kardashian boasts the longest marriage yet in her famous family (excluding momager Kris Jenner), to NBA player Lamar Odom. The two were married for seven years, from 2009 to 2016, despite their separation in 2013. Odom’s infidelity was allegedly the reason behind their split.

Before she was famous for her “Revenge Body,” Khloe Kardashian dated Tampa Bay Buccaneer Derrick Ward. They were together from March to July of 2009, a short romance that was kept hush-hush by both celebs.

Khloe Kardashian’s first public romance was with rapper Stevie J from 2005 to 2006. In an interview with Bossip, Stevie J alluded to their romance without explicitly confirming anything: “Khloe’s a great friend of mine,” he said. “She’s a sweetheart.”

It seems that the third time’s a charm for Kim Kardashian’s marriage to rap icon Kanye West. The two wed in 2014 after nearly two years of dating, and appear to be happily married despite the constant stress of living in the public eye. "Kimye" have two kids together: North and Saint.

NBA player Kris Humphries, aka the man who nearly stopped “Kimye” from happening, was married to Kardashian for just 72 days. Regarding their split, Kardashian revealed she felt pressured into wedding Humphries.

Kim Kardashian dated Canadian model Gabriel Aubry for two months following a string of one-date disasters. After the two were spotted getting cozy at an LA Lakers game, their romance seemed to fizzle and they were no longer pictured together. Allegedly, Aubry was only using Kim for her fame.

Ah, Ray J. The three-year relationship between Kim K and R&B singer Ray J catapulted her from a cushy life of luxury to one of fame and fortune. After they split, their sex tape was leaked for public viewing, and Kim Kardashian became a household name.

Before Nick Cannon was Mariah Carey’s ex-hubby, he was Kim Kardashian’s ex-BF. Following her split from Ray J, Kardashian was linked to Cannon for nearly four months from late 2006 to early 2007. Cannon revealed that the infamous “tape” and Kim’s denial of its existence led to their split.

Before her infamous marriage to Kris Humphries and her fairytale wedding to Yeezy, Kim Kardashian was married from 2000-2004 to music producer Damon Thomas. Kim was only 19 when they eloped.

"Rack City" rapper Tyga and reality star Kylie Jenner were very public with their PDA-filled on-and-off affair. Their relationship was a source of incredible controversy due to the significant age gap, Jenner’s barely-legal status, and Tyga’s recent split from baby momma Blac Chyna.

During one “Kyga’s” breaks, Kylie Jenner was linked to InkMonstarr, a rapper most known for his multiple beefs with Tyga. According to Miami rapper Stitches, InkMonstarr and the youngest KarJenner were an item for just a few months.

The 25-year-old “Butterfly Effect” rapper Travis Scott is Kylie Jenner’s current beau and presumed baby daddy. After her split from Tyga, Jenner was spotted cozying up to Scott and jet setting around the world to follow his tour schedule.

Kylie Jenner’s short-lived romance with Lionel Richie’s son Miles ended soon after it began. Two months after Jenner was spotted locking lips with Richie in his Benz and tattooing her initials on his hand, the two called it quits.

Mega-famous, swagged-out pop star Justin Bieber has no problem snagging a date, from supermodels and actresses to reality superstar Kylie Jenner. While the two only went on one highly publicized date in West Hollywood, rumors of their burgeoning romance swirled for months after.

The then 15-year-old Kylie Jenner was linked to rapper and Bieber BFF Lil Twist following her split from Jaden Smith. While their two-month romance was fleeting, the paparazzi pics from their movie dates are forever.

In 2013, Kylie Jenner was linked to Jaden Smith, the ultra-woke heir to Will Smith's "Fresh Prince" fortune. While the two longtime friends eventually took their relationship to the next level, their budding romance lasted only seven months.

Kylie moved on to Australian singer-songwriter Cody Simpson in early 2012. The young couple lasted only six months, and neither spoke publicly regarding the split. However, Simpson did joke to Ross Matthews on "Hello Ross" that the "whole K-O-D-Y thing" didn’t really work for him.

It's no surprise that lip kit Kween Kylie Jenner started dating her first boyfriend, Ramsey IV when she was just 12 years old. The two dated for a staggering three years and nine months (2008-2011), an impressive feat for the then-preteens. Ramsey IV is now an LA-based aspiring vocal artist.