2017’s Weirdest and Most Insane Scenes From TV Shows 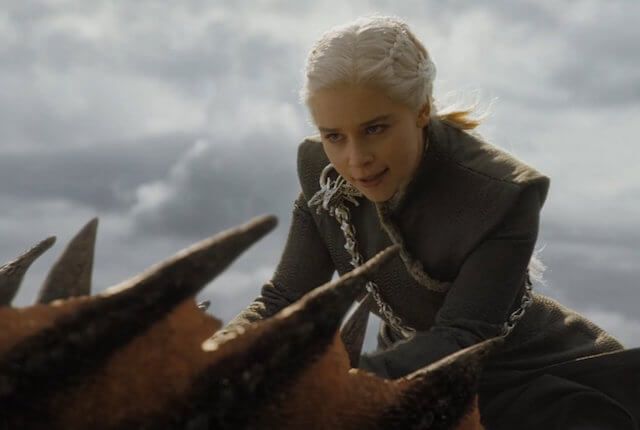 Television does a lot of things. It makes us laugh, cry, and provokes arguments when you move ahead in a season before your watching partner catches up. But sometimes, TV surprises us. Or even shocks us. And in 2017, TV WTF scenes produced images that sear in our brain forever. So here are the 2017 TV WTF scenes that made us stand up and shout: "Wha?!" WARNING: Spoilers ahead.

Now that Kevin Spacey is out of the picture, we can relish this diabolical twist from Robin Wright and hope there’s more to come in the show’s last season. Claire Underwood dispatches with a potential rival by transmitting poison to him while they’re in the middle of having sex. I mean, just, damn.

How can you reinvent the making-fun-of-bad-movies wheel? That’s the issue facing the reboot of Mystery Science Theater 3000, but in the episode “Starcrash,” the new cast blew our minds with an out-of-nowhere Beach Boys-esque tune accompanying a chunk of the film. It’s hysterical and wholly original.

For its seventh season, The Walking Dead invented a new storytelling trope we like to call Chekhov’s Tiger: If you introduce a tiger in the first episode, it better attack by the last. And attack it did, raising Hell on some Walkers that actually made us feel sorry for flesh-eating monsters.

The women of Broad City haven’t hidden their love of illicit substances. But in this season four episode, a trip on some potent mushrooms becomes animated, giving artists a chance to flex their psychotropic muscles. Our favorite bizarre moment: a sojourn to France, featuring a wine-drinking moon.

We all know a murder is at the center of Big Little Lies, we just don’t know who dies and who kills them. When the miniseries finally shows its hand, revealing the abusive rapist Perry is killed via stairicide not by his wife but by sexy new-age Bonnie, it’s equal parts cathartic and confounding.

Nathan For You - Kissing Strangers

Mr. Robot - One And Done

Master Of None - Heart Of Hearing

It’s a surprise that Master Of None’s “New York, I Love You” isn’t about any regular cast member, instead showcasing random folks. It’s a bigger surprise when a deaf couple is featured, all sound design is silenced, and we watch several scenes play in ASL. Formally brilliant and inclusive.

Hannah travels to the home of influential writer and noted creep Chuck Palmer (the disquieting Matthew Rhys). In an uncomfortable, prosthetics-addled scene, Palmer shows us who he really is, and Lena Dunham adds her voice to the din of holding horrible men accountable (uh, at least in her TV show).

Twin Peaks: The Return - Got A Light?

TBH, this whole list could be scenes from David Lynch’s fever dream. Yet episode 8 takes the cake with an atomic blast from the past, from which emerge radioactive zombies (?). All they’re doing is asking townsfolk if they have a light for their cigarettes, but it’s unsettling and squirm-inducing.

The Handmaid’s Tale - A Horrifying Punishment

Even in a world where women are being disturbingly treated as slaves, the episode “Late” goes beyond the pale. When Ofglen is discovered having an illicit homosexual affair, her lover is executed. She, however, receives a punishment disturbingly borne from our real world -- genital mutilation.

Let’s lighten things up a bit, shall we? Legion unexpectedly gets into psychedelic territory when, in “Chapter Six,” Aubrey Plaza breaks out into a dance to a remix of Nina Simone’s “Feeling Good.” What? Her dance symbolizes her character ravaging the main character’s psyche? Hmm. Still dark. Fun.

The Good Place - The Good Twist

“Episode V” follows activistic student Reggie to a party. When one of his white friends starts rapping the N-word, tensions rise unbearably, until campus police arrive and pull a gun on Reggie. While the moment is shocking, it’s also an invocation of moments that are regrettably all too familiar.

How To Get Away With Murder - Oh, Baby

Shonda Rhimes’ drama got away with something, alright. When Laurel gives premature birth to her baby in an elevator, Annalise pulls the stillborn child across the floor and performs CPR unsuccessfully -- and they show it all. It’s harrowing, grotesque, and frankly, ghoulish.

In American Horror Story’s latest blunt offering, they handle Trump’s election with surprising sensitivity...  just kidding, they open with an alt-right monster humping his TV and blasting Cheeto dust onto his face to mimic his idol. Make America Unsubtle Again.

13 Reasons Why - Suicide Is Painful

You knew that Netflix’s morose teen drama 13 Reasons Why had to directly address Hannah Baker’s suicide. You may not have known they would address it in clinical, gruesomely explicit detail. The choice may be controversial, but it certainly can’t be criticized of romanticizing suicide.

Game Of Thrones - Here Are My Dragons

If the sight of Daenerys Targaryen flying on a goddamn fire-breathing dragon as it wreaks havoc on everything in sight does nothing for you, you don’t deserve George R. R. Martin’s final novels (whenever he gets around to them).

Sometimes truth is stranger than fiction. During the 2017 Academy Awards, La La Land won Best Picture, and their cast and crew took to the stage to give their speeches… except Moonlight actually won Best Picture, and an onstage switcheroo was made. Was it a mistake? A conspiracy? Seriously... WTF?