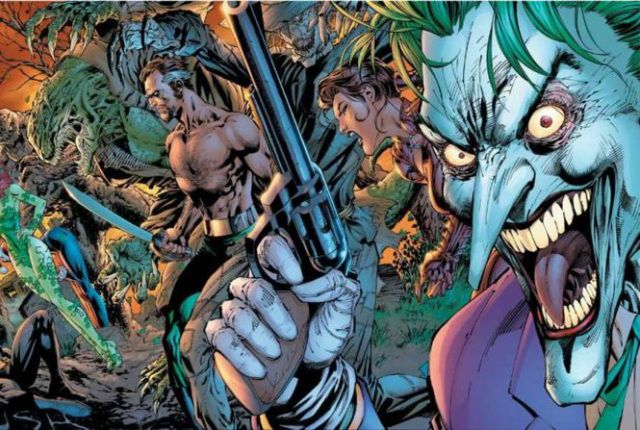 What if that annoying, brainless idiot from “The Wizard of Oz” was also a murderer? Cool, you just imagined this dumb Batman villain.

The Ventriloquist himself, Arnold Wesker, silent and nervous behind his evil doll, is pretty damn creepy. But Scarface, the dummy, is so ridiculous that you can't take this stupid Batman villain seriously for a second.

King Tut's deal was he got hit on the head and woke up thinking he was the reincarnation of King Tut. Wow, what an origin. Interestingly, King Tut was one of the few villains to learn Batman's secret identity on the TV series.

We don’t know much about Killer Croc, actually. He’s like a big, angry crocodile-man? With super strength? He probably has super-strength. Seems a lot like he’s a way less interesting knockoff of the Lizard from “Spider-Man.” That guy rules.

You know how everyone and everything in “Alice in Wonderland” is creepy and slightly menacing? This guy takes that idea and runs with it. Based on the Lewis Carroll character, Batman’s Mad Hatter is a non-powered villain who uses technology to control minds.

Calendar Man was a stupid Batman villain with an insane costume and a dumb gimmick: He's obsessed with calendars and dates. But then "Batman: The Long Halloween" repositioned Calendar Man as a Hannibal Lecter-like character who, from his Arkham cell, help Bats catch a holiday-specific serial killer. And suddenly he was kind of awesome.

The Riddler is an expert at all kinds of riddles, puzzles and games. So, basically, he’s a nerd. However, his particular genius means his deductive/detective skills have rivaled those of Batman himself. So that’s pretty cool. Cool for a nerd, anyway.

He may just be an ordinary street criminal, but Joe Chill’s legacy looms pretty large in Batman’s world considering he’s the one who killed Bruce Wayne’s parents.

Not all ‘roided-out behemoths with super strength are as dumb as a bag of hammers. Bane happens to be genius-level intelligent. And he’s the guy who broke Batman’s back. Remember that?

Killer Croc isn’t even the best Batman villain with a “Killer [Animal]” name. Killer Moth is better. He’s just like Batman in that he has no powers, just cool gadgets and smarts. Plus, moths are cool.

One of Batman’s great non-super foes, mob kingpin Carmine “The Roman” Falcone rules Gotham’s underworld with an iron fist, and is a constant thorn in Batman’s side. He’s pretty kickass, TBH.

Now that Catwoman’s kind of a good guy, Poison Ivy gets to be Batman’s No. 1 femme fatale foe. She may be an eco-terrorist botanist, but she’s not all bad. She’s always trying to get her friend Harley Quinn out of the latter’s abusive relationship with the Joker. So, y’know, she woke.

For decades, Mr. Freeze was a third-rate Bat-villain. Then “Batman: The Animated Series” came along in 1992 and gave the character a backstory so compelling and so sympathetic that it’s been adopted as canon across the Bat-verse. Now Mr. Freeze is awesome.

Ra’s al Ghul is a genius criminal mastermind who wants to decimate human life on Earth. Oh, and he knows Batman’s secret identity. Oh, and he’s basically immortal. Try to stop him.

The Penguin looks like a fat idiot, but underestimate him at your peril. He’s a criminal mastermind and an engineering genius with a bottomless wallet and an out-of-control Napoleon complex. Don’t f--- with this dude.

Let’s face it: Batman has some serious issues. Like what? You name it: egomania, post-traumatic stress disorder, rage, antisocial personality disorder, obsessive/compulsive disorder, and probably even good old depression. That's for starters. Arkham Asylum ain’t got nothing on this dude’s inner demons.

Harvey Dent was a lawyer who got acid thrown onto exactly half his face, and it drove him insane. Now he's a total psychopath, but willing to let fate guide his choices. Is he going to torture and murder you, or set you free? That’s up to the coin flip, man. Basically, Cormac McCarthy 100-percent ripped off Two-Face when he created Anton Chigurh in “No Country for Old Men.” Because why wouldn’t he? Two-Face rules.

You know the Joker by now. He’s a criminally insane psychopath who’ll torture and kill anyone and cackles annoyingly at all times. He's so obnoxious. But he's an icon.

The love-hate relationship between Bruce Wayne and Selina Kyle is one of the best in the Batman mythos, and although she’s been more of anti-hero than a villain for years now, we liked her better in Batman’s rogues gallery.

Egghead was a character created specifically for the ‘60s Batman TV show, and was portrayed by the immortal Vincent Price. And we think they need to bring him back. We’re sick of all the dark-and-brooding Batman stories. We demand more puns in comics! For our money, Egghead is the greatest Batman villain of all time. Egg-zactly! Egg-cellent!