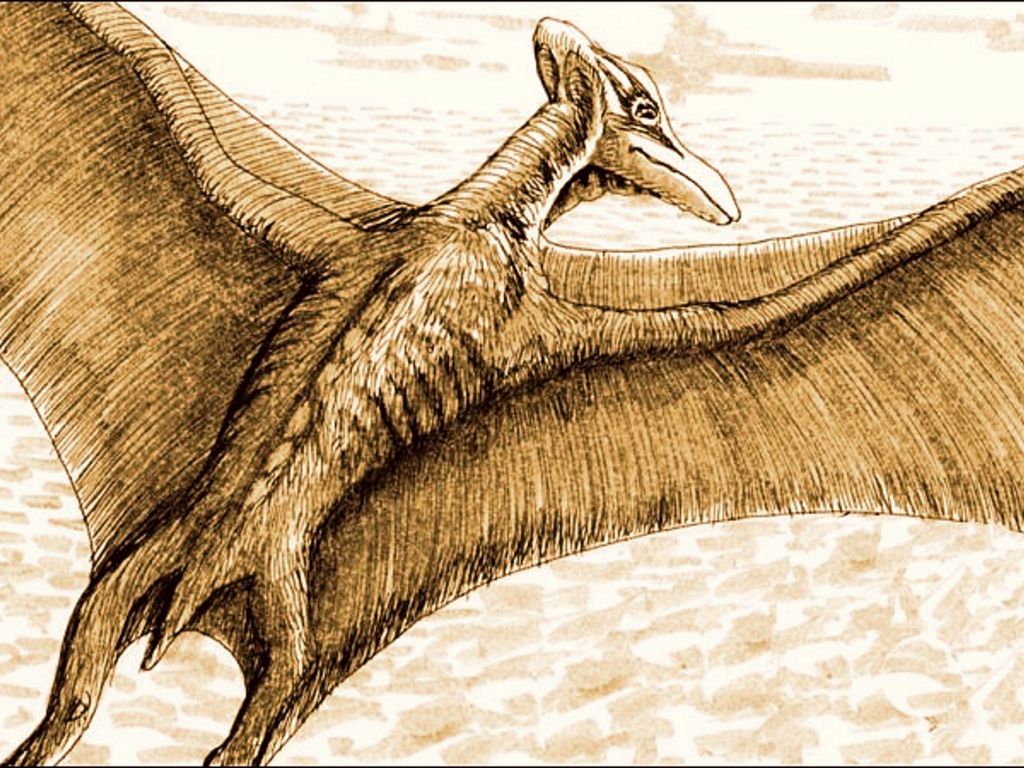 Bigfoot and Nessie better watch their backs. Most monster-hunters are familiar with the run-of-the-mill creeps and creatures but there are some lurking about that may not be so familiar. Below is a list of the most terrifying, unusual and down-right creepy cryptids.

Point Pleasant, West Virginia's most infamous resident, Mothman, is described as a humanoid figure with hypnotic red eyes and a massive wing span. Believed to be responsible for (or possibly foreshadowed) the Silver Bridge collapse on December 15, 1967, the creature disappeared until it was spotted in 2007. As recently as 2017, many people have reported sightings of Mothman in Chicago.

Hidden within the Pine Barrens of southern New Jersey, the Jersey Devil gained popularity through a local legend in which a mother cursed her offspring to become a terrifying demonic creature. Described as having a body similar to a small horse with bat-like wings, sightings of the creature were widely reported in 1909 and in 2015, David Black allegedly captured a picture, seen above, of the creature on his cellphone.

Ever since man first looked up at the stars, the possibility of life on other planets has both fascinated and terrified us. Whether its 'the Greys' or 'Reptilians,' the existence of aliens has fueled conspiracy theories and inspired box-office successes. Beginning in the 1940s, sightings of extraterrestrial beings has skyrocketed. This year, believers of the alien phenomenon stormed the gates of Area 51 in search of the truth but to this day, answers to what lurks beyond the constellations remain unknown.

Residing in the depths of Antartica's ocean and the seas of Southern Asia, the Ningen is a pale being with vaguely humanoid appendages and a mermaid-like tail. Most sightings have occurred around the waters of the Pacific and Atlantic oceans with witnesses describing a "blubbery, whale-like creature" with little to no discernible features except a slit-like mouth and two huge eyes.

Creepypasta fans may be familiar with the Michigan Dogman legend. Witnessed in Wexford County in 1887, the creature is reported to be a 7-foot tall canine creature, similar to a werewolf, with blue or amber eyes and a scream-like howl. The only "credible" evidence of the creature is the infamous "Gable film" which was released in 2007 showing footage of the Dogman, captured in 1970, charging toward cameraman Aaron Gable.

During the 1970s, mass hysteria was triggered by the appearance of a monstrous creature attacking the locals of Enfield, Illinois. Described as having three legs, stubby arms and supernatural speed, the monster terrorized victims and led to widespread panic. Despite numerous reports, those in the medical field have dubbed the creature as nothing more than the result of a social contagion fueled by fear and media speculation.

Menehune are thought to be a race of pygmy people from Hawaiian mythology. It is said that they live deep in the forests of the islands. They are thought to terrorize visitors in an effort to scare them away from their home.

One of the most elusive cryptids, shadow people are among the most widely reported paranormal phenomenon in the United States. Believed to be aggressive or mischievous entities, shadow people are rarely captured on film due to the fact that they are only visible in your peripheral vision. Some associate these entities with the other cryptids like raven mocker and the jinn and these entities are most often reported during episodes of sleep paralysis.

Stories of black-eyed children are told with extreme caution due to the mysterious circumstances in which these bizarre specters appear. Often encountered on lonely stretches of road, in forested areas, or even on the front steps of residential homes, black-eyed children intimidate their prey and try to gain access into homes and cars. Thought to be extraterrestrials, vampires or dark fairies, the black-eyed children are known for their pale appearance and monotone voices.

Spotted in 1977 in Dover, Massachusetts, the Dover Demon is a small humanoid creature with a "watermelon-shaped head" and no discernible features expect for its round eyes. Residing in the trees, its believed the creature's sandpaper skin helps it camouflage or possibly gives this creature the ability to be invisible. Some believe the creature is related to the Mannegishi who are seen as trickster entities in Cree folklore.

First reported in West Virginia in 1952, the Flatwoods Monster is allegedly an extraterrestrial being with a hoodlike "ace of spades" structure around its face. Sightings of the creature were also accompanied by a pungent odor and bright pulsating lights causing some to believe a ufo had landed in the area. Fifty years after the initial investigation, many have concluded the lights were from a small meteor and the creature was nothing more than a barn owl.

Described as a "dragon-like beast" inhabiting Frederick County, Maryland, the Snallygaster was first reported in the early 1700s by German immigrants who witnessed a "half-reptile, half-bird… with octopus-like tentacles" that would snatch its victims and drain their blood. Sightings of the creature have been reported in New Jersey, Washington, West Virginia and Ohio until they mysteriously ceased in 1909. In 2014, the "Mountain Monsters" AIMS team attempted to capture the creature but were unsuccessful.

Perhaps the most controversial of cryptids, the globster is a name given to unidentified masses that wash ashore with "no visible eyes, no defined head, and no apparent bone structure." In 1977, a globster nicknamed "New Nessie" was discovered in New Zealand that many people believed was the remains of the deceased plesiosaur but was later revealed to be the carcass of a basking shark.

With only two reported sightings, the Fresno Nightcrawler (aka Carmel Area Creature) has remained elusive since 2014. Recorded on a security camera in Yosemite, this creature seems to be less than 1.5 meters tall, extremely pale and comprised of a ball-shaped body and two long, slender legs. This cryptid was featured on an episode of "Faked or Faked: Paranormal Files" but proof of its existence remains to be seen.

And you thought the flying monkeys from "The Wizard of Oz" were terrifying. Encounters with these particular primates describe a 3-7 foot tall "canine-faced" creature with "kangaroo-like legs" and "3-toed, razor-clawed feet." Faster and more aggressive than your typical chimp, run-ins with the Devil Monkey often lead to devastating acts of destruction.

The island of Java is rumored to be the home of a giant bat-like creature named after its strange blood-curdling howl. The Ahool is said to be roughly the size of a human toddler with a wing-span of nearly 12 feet. With sharp claws and powerful, leathery wings, this terrifying beast is able to snatch its prey from above. It was first sighted in 1925. Some theories regarding what the animal might be range from a large owl to a possible pterosaur.

Sometimes referred to as "The Smiling Man," the entity known as Indrid Cold was first encountered in 1966 by two men in New Jersey who were frightened by the "usually tall" man's "huge grin" and lack of ears and nose. Another witness described having encountered Cold after he emerged from a crashed UFO and stated he was telepathically told the entity was "from the planet Lanlulos in the galaxy of Genemedes."

A character from Victorian urban legend, Spring-Heeled Jack terrorized the citizens of London from the early 1800s through the early 1900s. Described as a demon-like gentleman with glowing eyes and metallic claws, the entity also had the ability to leap great distances and spew blue and white flames. Known for attacking women at night, reluctant believers were quick to call the figure a hoax and nothing more than a prank pulled by some ill-minded schoolboys. Some theorize the identity of the madman was Irish nobleman Henry de la Poer Beresford who was known for his wild antics and hatred of women.

Well-known in the Harry Potter fandom, the origin of the Pukwudgie is much more sinister than those stories. These devilish little creatures are known for their mischievous ways when it comes to interacting with humans. If angered, this "wild man of the woods" will kidnap or stalk their victim. Pukwudgies have been sighted in Massachusetts, West Virginia and Texas.

A demonic spirit that possesses vulnerable humans, the Wendigo is said to cause cannibalistic cravings, murderous tendencies and extreme greed. Found in Native America lore, the creature is described as being "gaunt to the point of emaciation" and surrounded by a death-like aura. Interest in the cryptid has led to its depiction on various television series such as "Supernatural" and "Hannibal."

There have been many conspiracy theories circulating the web regarding the existence of reptilian species hiding among the human population. However, in the town of Lee County, South Carolina, there's a strong belief that something cold-blooded is lurking in the swamp. The Lizard Man of Scape Ore Swamp was first sighted in 1988 when it tried to attack Christopher Davis' car. Witnesses have described the reptile hybrid as being 7 feet tall with green scales, 3-fingered hands and red glowing eyes.

In one of the most unusual alien abduction cases, Peter Rodriguez and John Hodges claimed that on August 17, 1971 they encountered two disembodied brain-like creatures on the road. One appeared to have a red-eye in the middle of its "body" and spoke telepathically to Hodges warning them the time was near for humankind to "understand yourselves."

Born out of Cherokee folklore, the Campus Beast is believed to be a distrustful woman who was cursed to wear the skin of panther after spying on her husband. Having glowing eyes and razor sharp claws, the creature often attacks its victims by leaping toward them.

Legends of enormous birds whose flapping wings could trigger thunder and lightening have long influenced Native American folklore. One of the most horrific accounts of a thunderbird attack involve the supposed attempted kidnapping of a 10-year old boy by two of the creatures on July 25th, 1977 in Illinois.

If you’d make it this far, you’ll be rewarded. The jackalope is the cutest of all cryptids. Thought to be a hybrid of a jackrabbit and antelope, some people believe that these creatures can run up to 90 miles per hour, which is kind of terrifying, right?