Kelly McInerney
The Definitive List of the Best High-School Movies of All Time August 27, 2019Leave a comment 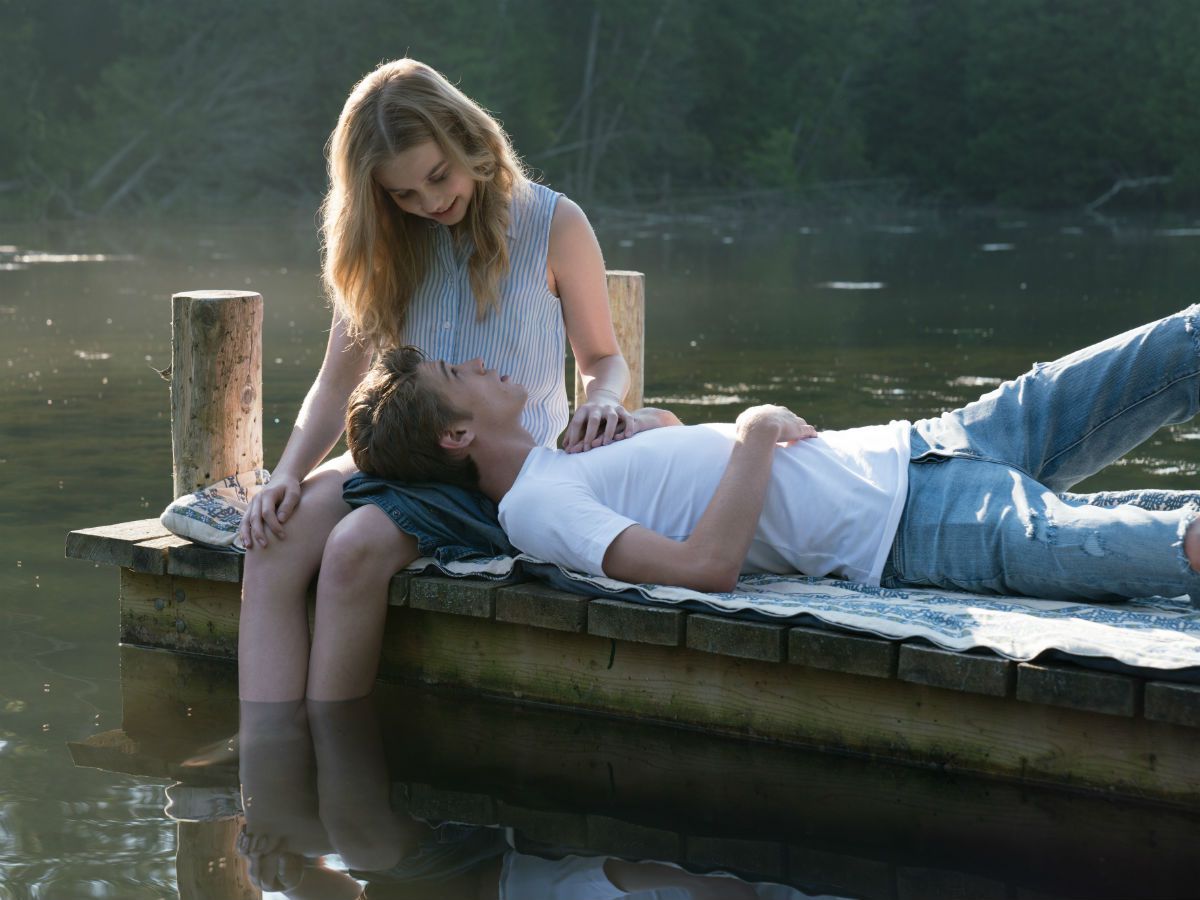 No matter how old you get, reconnecting with high-school movies is a fun way to fill your heart with nostalgic back-to-school vibes. Every few years, a good one comes out that can be a little be relatable to any generation. Here are the greatest high-school movies of all time...

Another high school movie that teleports you to the era while watching it is Fast Times at Ridgemont High. Fast Times takes place in Southern California in the 80's. It tells the story of teenagers hooking up and finding their first crushes and loves. It also highlights a breakout role for future Oscar winner Sean Penn as the likable surfer bro Jeff Spicoli.

Dazed and Confused tells the story of high school and junior high students on the last day of school in May 1976. We meet a variety of students from the stoners, the popular kids, and more. We also meet another future Oscar winner - Matthew McConaughey - as one of the bullies.

Who says all high school movies have to be funny? Carrie is the perfect high school movie that highlights when bullying goes wrong. Carrie is a simple girl with a crazy mom that gets made fun in school. When the bullies decide to have her win prom queen and spill pig's blood on her the shit hits the fan and her superpowers go dark as she exacts revenge on everyone at the prom.

Bring It On highlights the competitive world of high school cheerleading. It is arguably one of the best high school sports movies (if you consider cheerleading a sport unlike the crazy dance instructor in it). It shows how some people are judged poorly because of their neighborhood, but in the end, at least in the Bring It On world, talent prevails no matter where you live.

Grease is a high school musical set in the 1950's. It follows Danny and Sandy's romance but it also touches on important issues like Rizzo dealing with getting pregnant, dropping out of beauty school, and more. It's catchy and fun but isn't afraid to hold back.

Heathers is a dark comedy about exacting revenge on those mean girls from high school. Veronica wants out of the Heathers clique and the only way she can escape it is by teaming up with a sociopath and killing them all. It's a dark 80's movie at it's best.

Mean Girls is like the no-so dark version of Heathers. It tells the story of Cady, a new student trying to fit in. There are a variety of cliques and she ends up with the plastics, the most popular but most vicious of them all. She finds herself becoming too much of a plastic and decides to fight them, or at least Regina George. While nobody dies like in Heather, some one does get hit by a bus!

Ferris Bueller's Day Off's plot shows what a day is like when you skip a day of high school. Ferris is a senior in high school and is currently dating a junior, Sloane. He deals with what the future of their relationship is going to look like and tries to avoid the Principal from catching him play hooky.

Can't Hardly Wait is a cheesy 90's movie at its finest. It's the last high school party of the year and everyone is trying to make it or break it. The nerd gets with the hot chick, the bully gets what's coming too him, and friends reunite. It's a silly, fun, and wacky high school movie.

The Karate Kid is another alternative sports movie. Daniel-san moves to California from NJ and has a tough time fitting in. He learns karate from Mr. Miyagi and has to go up against the high school bully, Johnny, in a karate competition. All this while falling for a girl (who happens to be Johnny's ex) - it's a thrilling high school sports movie.

Fame is a much darker, bleaker version of High School Musical except these teens are in a fancy arts high school. It's harder, these kids experiment with drugs, worry about abortions and suicide, and that's just the start of it - all while singing!

Sure it's cheesy but it's so fun! High School Musical tells the story of a jock and a nerd who both get the leads in the high School musical and a romance starts brewing. It was only a Disney channel original movie but the movie became so huge that the third one actually received a theatrical release. It's also how America fell in love with Zac Efron.

10 Things I Hate About You

An updated version of Shakespeare's Taming of the Shrew, 10 Things I Hate About You is another high school classic. It tells the story of two different sisters finding high school love in very different ways. It was also the breakout movie for the late, great Heath Ledger.

Napoleon Dynamite is a very wacky indie film that became a big sleeper hit. We follow Napoleon, a confident oddball and his best friend Pedro. It follows the weirdos and how sometimes, at least with Napoleon's dancing skills, they're the coolest of them all.

Friday Night Lights is a high school sports movie at its finest. It highlights a small town in Texas, their all-star football team, and the demons each player faces in their day-to-day high school lives. Based off a book written by H.G. Bissinger, it later became a television show that lasted 5 seasons.

Although Booksmart just came out this year it is well on it's way to becoming a classic high school movie. It follows two girls who are determined to loosen up and party one last time before they graduate. Similar to Superbad in that they're two girls on the way to a party where there crushes will be and hijinks ensue. Super funny and also sweet as we follow their friendship and how they have to part ways for the first time when high school ends.

Back to the Future

Surprised to see Back to the Future on here? Well you shouldn't be! The story follows Marty as he goes back in time to high school in the 50's to make sure his parents meet and get together. Marty tries to look inconspicuous in the 50's but slips a little bit at least with that Chuck Barry guitar riffing at the end. He deals with Biff the bully and barely misses a love affair with his mom - all while in high school!

Election is another dark comedy about high school. It follows Tracy Flick who is an overachieving student adamant about becoming class president. She works alongside a teacher named Jim McAllister who doesn't trust her and chaos ensues. While it isn't Reese Witherspoon's breakout role it is one of the first ones where she holds her own and shines as the girl you love to hate.

Lady Bird is a coming of age tale about a 17 year old girl who now wants to be called "Lady Bird." It follows Lady Bird and her best friend, Julie, as the two of them try to navigate high school. From crushes to just dealing with her mom, there is something in the movie that anyone who's been to high school can definitely relate to.

To All the Boys I've Loved Before

Netflix's To All the Boys I Love Before is sweet and a great addition to all of the high school movies on this list. Lara has written various letters to her former crushes and when those letters are released to the public havoc is released on her life. It's sweet and heartwarming and almost makes you miss high school a little bit.

Rushmore is a coming of age story about a wacky, eccentric kid named Max. Max forms a new friendship with an older, rich industrialist and their mutual love of the Rushmore Prepatory school. Max is put on academic probation and tries to fight back. It is the breakout role of Jason Schwartzman and the first of many collaborations between him, Bill Murray, and Wes Anderson.

She's All That is one of those high school movies you can't help but laugh at. It tells the story of Zack, a high school jock, who takes a bet to make an ugly girl pretty but he ends up falling in love with her. It's silly and bad, Rachel Leigh Cook is only wearing bad overalls and glasses and that makes her "ugly," but it's got that great 90's high school soundtrack and some sweet parts that you can't help but enjoy it at least a little bit.

A brain, a beauty, a jock, a rebel and a recluse all meet at detention and an unlikely group of friends are formed. The Breakfast Club tells the story about a group of students who think they're different end up not being so different. John Hughes wrote and directed this classic and it is now one of the most well known high school movies of all time.

Superbad tells the story of Evan and Seth who are committed to going to a cool high school party and hang out with their crushes but hijinks ensue. It ends up taking them a little bit longer to get to that party. A simple fun concept to make for the perfect, hilarious, high school movie.

Clueless is a quintessential movie about high school in the 90's. From the fashion to the lingo, this movie teleports you to 1995 the moment you turn it on your television. It tells the story of Cher and her friends Dionne and Tai as they navigate how to be cool and date in high school.