Touch-Screen Dreams: What Are The Best Mobile Games Of All Time?

Greg Smith
Touch-Screen Dreams: What Are The Best Mobile Games Of All Time? June 5, 2018 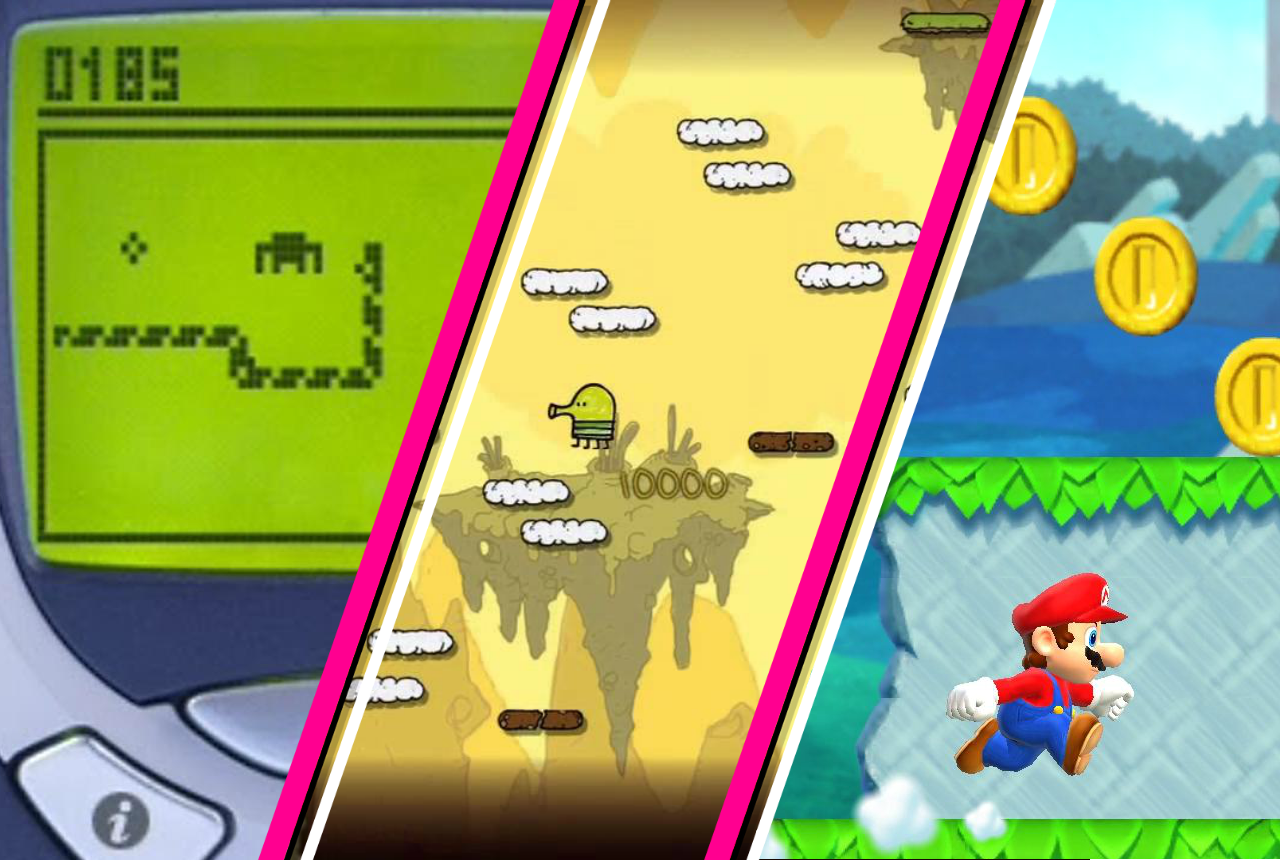 What are the best mobile games you can grab right now?

You drop a pin from your exact location. You drop the perfect emoji of your exact emotion. We're in the Golden Age Of "Holy Crap, Our Phones Are So Powerful". And if you're a gamer, you've got a lot of choices to make your smartphone a portable arcade cabinet. So how do you cut through the clutter of the App Store? And what's the best way to Google Play? Well, get your thumbs ready and wipe down your touch screens. Because it's time to get learned about the best mobile games you can play right now.

Enjoy dungeon-crawling games like Castlevania or Metroid? Wish you could play these games and have it be different every time? Shattered Pixel Dungeon is the perfect game for you. No matter how many times you open it, it randomizes a new dungeon experience for you. Addictive RPG combat that never ceases to surprise, in the palm of your hand.

You want more randomly-generated mobile games? Check out this game about our neighbors to the north, eh? Death Road To Canada features a vacation that goes very, horribly, weirdly awry. For a place that boasts friendly people and free healthcare, Canada sure seems to offer a lot of randomized zombies and werewolfs. That's the catch, we suppose.

Idle Heroes starts simply. You collect heroes and equipment, fight baddies, and collect rewards from these fights. Wash, rinse, repeat. But as your configurations and upgrades get more challenging in a typical RPG fashion, a new wrinkle appears -- these heroes keep fighting even when you're not playing. That means strategy is of the utmost importance. Do you have what it takes?

Have there been essential extreme sports games since the glory days of Tony Hawk's Pro Skater or SSX? There's at least one. You just might've missed it 'cause it's on your phone. Touchgrind BMX gives you simple controls, and you make your bike do the dopest tricks you can. Gnarly, dude.

Slayin' is the perfect intersection of casual, addictive, mobile-friendly gameplay with hardcore, 8-bit hack-and-slash aesthetics. All you do is pick a hero (knight, wizard, or knave), move forward, and slay whatever beasts come in your way. Perfect for quick 5-minute breaks, or an hour-plus gaming sesh. Slay, queen!

You're a triangle. You have to avoid a bunch of dangerous walls coming at you. That's it. Easy? Hell no. Super Hexagon is a sensory overload in the best way possible. Colors change abruptly, walls shift and change course, and the chiptune music chirps at you with what we'd call "aggressive cheerfulness". Good luck!

Sing it with us: Mope mop meep mope. Now, in addition to your Spotify library, you can take K.K. Slider's tunes on the go. Animal Crossing: Pocket Camp features the chill, stress-free vibes of the original Gamecube classic. And if you've never played the original, think of it like The Sims but 1000% cuter.

The Fallout series has such a big mythology to play with. How on earth could that translate to a mobile game? As it turns out, very well. Bethesda knocked Fallout Shelter out of the park, applying Fallout aesthetics with an appealingly addictive resource management form. Good luck keeping your residents happy when they're, you know, threatened by nuclear war!

There's a hard truth when it comes to mobile gaming. If you want to win so-called "free-to-play" games, you often have to spend a bunch of money on microtransactions. South Park: Phone Destroyer, in addition to being a fun card-based RPG set perfectly in the world of the show, satirizes these mobile game trappings with fierce accuracy and self-awareness.

A game of artistry, minimalism, and physics-defying wonder, Monument Valley is a must-add to your mobile game list. You play a princess navigating her way through beautiful locations comprised of optical illusions and impossible-seeming architecture. If Captain Toad: Treasure Tracker is a Skittle, Monument Valley is artisanal salt water taffy.

When you look at the graphics for Infinity Blade, you'll swear it's from a PS4 Pro, not a dang phone. And yet we're at the point where our mobile games look better than God Of War. What a time to be alive! Beyond its graphical horsepower, Infinity Blade is a fun, bombastic fighting game with shades of Soulcalibur.

For too long, online shooters have belonged to the PC and console crowd. Not anymore. PlayerUnknown's Battlegrounds, ported to phones from PC and Xbox One, plays like a dream and provides high-octane action. Gamers online are known to prefer the mobile version to its console brethren. Oh snap!

If you're missing games like Gauntlet Legends or Diablo, you need to download Arena Of Valor, tout suite. It's a fast-moving, colorful, bombastic hack-and-slasher you can play with folks from across the world. It's the top-grossing mobile game in the world. It's best time you joined.

You don't get many snowboarding games that feel "artsy". Yet Alto's Adventure is the 1080 McTwist for the discerning extreme sports game player. It offers a muted, shadowy color palette, oodles of tangible atmosphere, and a lovely soundtrack to boot. Throw on your headphones and get lost in the snow.

Do you like Monkey Island, The X-Files, Twin Peaks, spooky stuff, funny stuff, and feeling oodles of nostalgia? Download Thimbleweed Park and never look back. It's a pitch-perfect point-and-click adventure from the people who first perfected them. Plus -- light spoilers ahead -- the meta twist at the end is a doozy.

Sometimes when you're playing a mobile game, you don't necessarily want a full console experience. You want something casual, light, easy to pick up and play, yet engaging enough to maintain your interest. Word Crossy fills all these tiles and thensome. You get a certain number of letters, and simply cross your finger across the letters to create words that fit in a blank crossword puzzle. Warning: It's surprisingly addictive.

So you're having fun with the casualness of Word Crossy, but wish it had some of the hardcore RPG elements of the other games on this list. Hello, I'd like to introduce you to Letter Quest: Grimm's Journey. You fight monsters using the power of words, upgrade your equipment, find cool power ups, oh, and FIGHT MONSTERS USING THE POWER OF WORDS. Can't emphasize that enough.

The essential mobile card game. Warcraft meets Magic: The Gathering. Develop the perfect deck, use your mana to power your characters' attacks and spells, destroy your opponents. If you haven't played a fantasy-based card game since Magic (or, let's be honest, Yu-Gi-Oh!), you owe it to yourself to download Hearthstone.

It's not enough to demolish a friend at a video game. You want to demolish a friend and know, in your heart of hearts, you're objectively smarter than them, too. Trivia Crack is the potentially friendship ruining game for you. Spin the wheel, answer a question in a category, win yourself some damn trivia. It's like Trivial Pursuit meets Black Mirror, but way less dorky than that sounds (but still pretty dorky).

First thing's first: You may get distracted from actually playing The Banner Saga because of its jaw-droppingly beautiful art style. If you dig stuff like Ralph Bakshi's Lord Of The Rings films, or even the classic game Dragon's Lair, you will find lots to appreciate in The Banner Saga. Beyond its objective beauty, the game offers a rich and surprisingly poignant RPG experience.

Mario taking the Mushroom Kingdom to your phone. It was bound to happen, but would it open up a new world, or be denigrated to a lost level? Luckily, Super Mario Run is a perfect balancing act of classic Mario gameplay we all know and love with newly developing mobile controls we are now all used to. Make new friends but keep the old, one is silver and the other gold. Sorry, got musically inspired again.

The O.G. The classic. The reason any of us play any game on a phone. It's Snake, baby. The classic video game that was preloaded on the early age of cell phones, prompting a renaissance in how we game. The phone version is so important, it was added to the Museum Of Modern Art. Don't call it a comeback, it's been here for years.

Math class. You're sitting there, listening to your teacher prattle on about variables this, and the quadratic equation that, and blah blah blah. You're doinking around with your TI calculator, when your friend passes you a note. "You can play games on that thing". You look over. They show you how. You're never bored in math class again.