“Buffy the Vampire Slayer” Is Actually The Worst, And Here All The Reasons Why

Jen Arbues
“Buffy the Vampire Slayer” Is Actually The Worst, And Here All The Reasons Why February 28, 2018 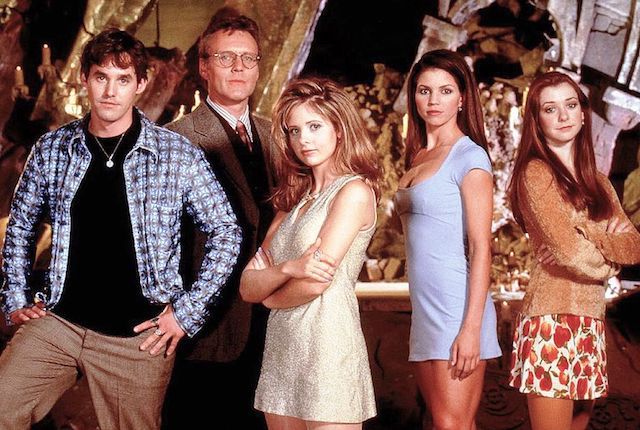 If you were an angsty teen in the late ‘90s, then you probably loved Buffy the Vampire Slayer. How could you not? Sarah Michelle Gellar was the envy of every girl back in the day. And she was the poster child for amazing ‘90s hair. Also, Joss Whedon made his mark on the industry with the series. He cultivated a fanbase that rivals Whovians or Juggalos. But Buffy is not one of those shows that a millennial could watch now and think, "Yes. This is a series that gave rise to an entire generation." Looking back on Buffy now, there’s plenty wrong with it. So here are all the Buffy the Vampire Slayer worst episodes, characters and other series fails.

The acting is pretty terrible

It’s kind of safe to say that nearly every show from the ‘90s featured less than stellar acting performances. And aside from a few exceptions, the cast of “Buffy the Vampire Slayer” pretty much only had some minor roles under their belts prior to the series. So there were definitely episodes that felt more like we were watching an actual high school production than a real TV show.

Did it bother no one that Sunnydale’s local night spot completely lacked any sort of age policy? It was a dance club of sorts when the Scooby Gang was in high school, a bar when they were in college, and a vampire breeding ground the entire f—ing time. No member of the 21 and over crowd wants to actually hang with a bunch of 15-year-olds… the least they could have done is put a different sign on the place when everyone graduated high school.

When Willow became “addicted” to magic

Willow’s dark turn to magic was a cool enough storyline, but did it have to be so… extreme? The after school special feel of it became a little daunting to watch after a while, and while we get it — magic is like drugs! — we didn’t need to be hit over the head with it. Willow kind of deserved better.

Those episodes that took themselves too seriously

“Buffy” was at its best when it struck a balance between Whedon’s signature snark and legitimate scares (season 3’s “The Wish” is a near perfect example). It was at its worst when it couldn’t manage to deliver on either (most of season 7’s Potential Slayers storyline). And when it tried to teach us a morality lesson in the Buffyverse context? We’ll get to “Beer Bad” in a bit.

The entire season 6 arc with Spike

“Buffy” fans fall into one of two categories: The Buffy-Angel camp or the Buffy-Spike camp. Regardless of whichever side you choose, there’s no denying that the entirety of Buffy’s season 6 “fling” with Spike was just kind of weird and uncomfortable. Sex dolls, hate sex, and finally an attempted rape? Hard cringe.

What the hell is a middle-aged man doing hanging around 15-year-olds all the goddam time? Did no one in the administration office have any problem with the fact that a bunch of children were spending all of their time in the library? Why didn’t anyone think this was f—ing bizarre?

When they wrote Dracula on for all of one episode

For a show about vampires and vampire slayers, you would think that one: they would have introduced Dracula a hell of a lot sooner than season 5, and two: he would have lasted a hell of a lot longer than one episode. But no. What we got was some lame, melodramatic incarnation of Bram Stoker’s famous villain and the potential of a great foe flushed down the toilet.

John Ritter was without a doubt one of the greatest comedic actors of our time. So what did the “Buffy” writers do with him? They made him a robot hellbent on making Buffy’s mom some sort of 1950s housewife before killing her. “Ted” was a pretty stupid episode to begin with, but seeing Ritter stuck in the role was far worse.

Sex is bad, kids. At least, that was the message in “Where the Wild Things Are.” Well, that something about repressed and abused dead children feeding off the endless sexual energy that Buffy and Riley were putting out. Because kids and sex. It’s an obvious pairing.

Who the f— decided that Riley was a good replacement for Angel? So Buffy goes from a badass immortal who’s maybe one of the best looking men to have graced the small screen in 1997 to some military tool who looks like his face has been hit with a shovel. Riley was dull, boring, and had zero onscreen charisma. Riley was the wrong answer to Buffy’s love life problems, and we all know it.

Owen and Scott were both kind of terrible in their own rights; after all, who the hell spreads rumors about someone’s sexual orientation just because they got dumped? But the real winner here is Parker, the college-era douchebag who toyed with Buffy’s emotions just for a one night stand. Seems like a lot of work to go through for so little payoff, really.

When they killed Anya off unduly

Anya had some ups and downs over the course of her tenure on “Buffy,” having started out as a vengeance demon before becoming human, then going back to being a vengeance demon, then back to human. But she was a great character nonetheless, and if we were to have to choose anyone to die in the final battle, it wouldn’t have been her. It probably would have been Xander, tbh.

When “Buffy” was bad, it was really bad. And “Beer Bad” is one of the biggest turds Joss Whedon ever had the audacity to serve up to fans. The series was never particularly successful in addressing more commonplace issues, like bullying (“The Pack”) or underage drinking, but to turn those who participate in the practice into cavemen? F—ing cavemen. Because beer kills brain cells and causes evolutionary regression, or whatever?

Cue the, we ran out of ideas for the big bad, storyline. The show really should have made it beyond season 4 before this happened, but we weren’t in control of the writers’ room, so what can you do? Apparently, you can write in a secret government monster hunting faction run by a woman with a ridiculous resentment against the only person who can actually help the cause.

Look, we love Willow. And we love that Willow’s character served to open up conversation about sexuality in the late ‘90s. But we don’t love the fact that she was written as heterosexual for the first few seasons (lest we forget both Xander and Oz) before she became the poster child for college lesbianism. There is an entire spectrum of sexuality, and Willow could have just as easily been portrayed as bi (which she very clearly was).

When they replaced Tara with a shitty wannabe

The Tara-Willow pairing was the stuff relationship dreams are made of. They were perfect for each other, and perfect individually. Then Tara had to go and get herself murdered, and Willow had to lose her humanity, and then she had to rebound with Potential Slayer Kennedy. Unfortunately for everyone, Kennedy’s only personality trait seemed to be that she was an open lesbian. Ooh, hide your children.

The Potential Slayers’ lack of personality

Speaking of, did any of the Potentials have anything to offer by way of character? Actually, could you even name any of the other Potential Slayers if you had to? Because we had to Google Kennedy, and she was definitely the most well-known of the bunch.

You thought the big bad in season 4 was sad? Oh, let’s just skip on ahead to season 6 and “The Trio,” better known as the group of nerds who were so inept at being true villains that their biggest claim to fame was building sex robots. Well, that and killing Tara, but that wasn’t even on purpose, so how were we ever supposed to view them as real baddies anyway?

When Angel was written off the show because of “Angel”

Just because “Angel” became something of a better series than what we sat through in the final days of “Buffy,” it doesn’t excuse the fact that we were forced to watch an integral part of the show just sort of walk away from it. Sure, there were a few crossovers here and there, and sure, we were comforted by the Buffy-Spike romance (at least some of us were), but the entire exit was handled pretty poorly. He had to leave because of his fear of hurting her? Is that like a real thing?

Don’t come at us with any argument in favor of Dawn. There is no argument in favor of whatever poor excuse for a fifth season plot device she was. And no, there is no teenager in the world (and Dawn was a teenager when she was added to the series) who has as many tantrums as she managed to have. She was obnoxious, annoying, and completely unnecessary. And if we could forget about her completely, we would.