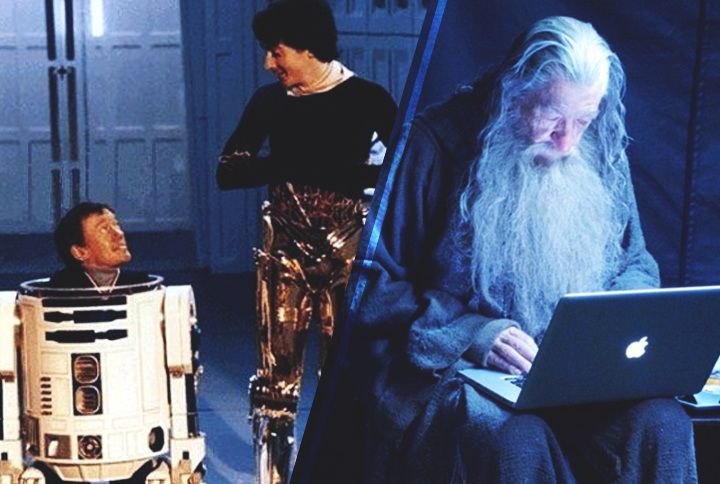 Even R2D2 needs a candid smoke break every now and then.

Directors frame films to show you the best parts and scenes, essentially "stitched" together. These days, many fans love seeing the behind-the-scenes look at a production, where downtime is seldom seen, but welcomed. Here's an exhaustive and in-depth look at some behind-the-scenes photos from the best films to ever premiered at a movie theater.

Back To The Future

Michael J. Fox must have been living the dream. Who wouldn't want to wear futuristic lace-up nikes, a nifty jacket, or drive in a DeLorean as grown men stand under you waiting for the next shot? This set was the equivalent of being a kid in a candy store.

Normally, horror sets don't usually freak me out, but being on set of alien was different. The animatronics of the aliens were so lifelike, and the kraft food section was amazing. They had hot dogs, BLT sandwiches, hot coffe, and churros! By the end of the day, I felt like I had a chestburster ready to come out of my stomach.

Hugo waving is a man of many faces and skills. He played one of the craziest villains in all of sci-fi, and he was a guy you'd love to hate. That being said, these heads are messing with my head with how lifelike they were at the time. Nothing, even CGI, can beat the complex art of practical effects.

Inception had a really awesome soundtrack. As trippy as most of the movie was, it was nice to see some quality music come from Hans Zimmer and his orchestra friends. This set piece is still crazy to look at, and it still looks like it took tons of hours to set up and shoot.

James Cameron is arguably the best director of our time, and the terminator seris is one of his standouts. Even when you're looking at B-roll photos, nothing gave me more fear than seeing Arnold with the little bit of Terminator showing. I can't tell if he's pon break or plotting his next kill.

This looks like E.T. is getting special treatment at a Motel 6, which had really good commercials. They had that guy name Tom Bodett, and he was cool. He had a really calm voice, and I'd imaging that E.T. would love to stay a couple of nights at a quality motel if he was on the run from the government.

I don't know what's hgappening here, but it certainly looks as if Chris Hemsworth is playing Tug-O-War with the rest of the Avengers, and Chris Evans is having a hard time. ScarJo looks like she's holding on pretty well, and the green screen probably means their in big trouble.

Batman was an iconic movie, but I had no idea that they used such small models for scenes . Then again, it would've cost the studio a boatload of money to film with a working life-size batwing. The smaller one, I'd imagine, was used so that they could save more money on the action scenes, and this film had a lot of them.

Ray Park knows his way around a double-edged lightsaber. It was easy for him to chanel Darth Maul. "When Maul was still a child, Sidious took him to the planet of Malachor to witness a great battle between the Jedi and the Sith." Now THAT'S a great way to introduce a villain.

Oh, nothing to see here. Just A guy in and ape suit, reading a newspaper and going about his day. He also has a cigar, which is surpring, not because he's an ape smoking a cirar, but because he can even smoke the cigar through the suit. That is... unless the cigar is fake. I'd like to think that it's real, cause it's funnier that way.

Sigourney Weaver was and is one of the most badass actress of all time, mostly due to being in great films like Alien and Ghostbusters. Her Ripley character was kicking butt and taking names, and she was the calalyst to future female heroes and protagonists.

Back To The Future

Michael J. Fox didn't have any P.F. Flyers like Benny from The Sandlot, but he needed to show the cast that just because he was short, didn't mean he didn;'t have hope like Larry Bird. He jumped so high they didn't know what to think, and after that, the director took off his sunglasses and said "cut!"

It's so weird seeing Harrison Ford being so young in film,s but it's cool to see a time where he was in an iconic film other than Star Wars. Bladerunner set the genre if cyberpunk, and it showed a gritty future that is very much plausible in our lifetime. More people need to check out the Blade Runner films, they're seriously awesome.

Johnny Depp and Winona Ryder were so awesome in Edward Scissorhands because it seemed like the genuinely cared for one another during filming. The movie had a very faint air of dark comedy, but it was also laugh out loud funny as well as charming.

This looks like a lot of makeup and prosthetics that needed to be put on. This had to have taken hours to do, and I couldn't imagine sitiing on a stylist chair for such a long time. Hayden Christensen looks like he had a gnarly itch that he couldn't reach because he couldn't move.

When I was a kid, i used to play an old ghostbusters game on our family nintendo. That game was so difficult. The films were always funny, but I was always still scared of the 'stay puft marshmallow man' because I couldn't fathom a creature that cute, but also that evil.

Guardians Of The Galaxy

Chris Pratt looks epic in this shot, even if there's a blue screen in the background. It has to be there because that's what they use to help compsotite CGI into shots of a film. The b-roll also has to look pretty funny, I imagine.

I alwasy forget how much weight Chris Pratt had to lose to look the part of Peter Quill, but his weight loss and comedic timing was al worth it in the end.

A lot of people didn't know this, but Harry Potter's archnemesis Lord Voldemort's makeup was not entirely practical effects, but had a bit of CGI attached in post. This still took a few hours to put on and reapply, but it was all worth it when filming was done. Now Lord Voldemort is more sinister and scarier in the films than he is in the books.

Inception is still one of the trippiest films that I've ever seen in my life. Maybe it's because of the uncanny way they filmed scenes, or the amazing use of effects. Either way, this film was awesome for a couple of reasons. Looking at this photo, everyone was having fun with the crazy shifting and pitching of the set, but just wait until you see the same set again in the movie.

"Welcome to Earth" was one of the more notable quotes from Independence Day, and we've been in love ever since.I'm stoill shock to see how many miniature models they use in films, and this sci-fi disaster film is no different. I wish that I could've been a fly on the wall to see this explosion.

Jurassic Park is extremely iconic oin part due to their use of practical effects. A majority of the time, the dinosaurs wer not CGI, but instead either animatronics or miniature figures. The scenes still came out beautifully, and the scenes are still epic to this day. A lot of love went into this film, and it clearly shows.

Kill Bill Vol.1 will always go down as one of the bloodiest films ever made fromm Quentin Tarantino. The whole "Crazy-88" scene still amazes me. From the choreography, to the anime-like blood spatter, to ever the convincing body dismemberment, seeing a headless guy from this position still freaks me out. Seriously, if you haven't seen this movie, please consider watching it.

Star Wars is iconic for near-unlimited reasons, and arguably defined what the "space opera" genre is today. One of the best aspects of the film was the amopunt of worldbuilding, and the vast types of species and creatures in the fictional universe. George Lucus didn't have just hum,ans, but also Mon Calamari, Hutts, Jawas, Ewoks, Wookies, Quarren, Togruta, and many more.

Harry Potter and The Chamber of Secrets

Dumbledore and Lord Voldemort look so awkward chilling like this. I don't ctrust him one bit. He already has his wand out, but it's always great to see both actors having a productive conversation in their downtime. At this time, they've been friends for decades now.

This suit must have been extremely difficult to fit in. Considering that this is a film from the mid-late 1920s, a lot of things in production weren't available for use at the time. It looks like the actress can barely move, so much so that she has to have someone help here drink from a cup and straw. Awesome and eclectic choices at the time.

Planet of The Apes

This is kind of funny to see because "Planet of the Apes" was a very serious movie, but the welcomed levity is shown in this photo. This film always kept me on my toes, but a movie about living in a post-apocalyptic world, where ares are leaders of the remaining world is a really cool way to start a very grim story.

Peter Weller may have loved acting as one of the most iconic cyborgs in sci-fi history, but I can also imagine that he idn't love being confined to a seat for hours. The RoboCop outfit, nevertheless, is till awesome, and their art and costume department being consistent and patient really helped eveerything look that much more convincing in the long run.

Alec Guinness is just minding his own business, as a maching slowly creeps behing him. What the machinge doesn't knowever is that He's the actor who poprtrays Obi Wan Kenobi, one of the most influential characters in not only the Star Wars universe, but in science fiction also. To this day, many people still see his character as a mentor of sorts in their darkest time.

Christian Bale And Tom Hardy were laughing it up in a tense scen in Christopher Nolan's The Dark Knight Rises. Say what you will about the Nolan Batman Films, this end to the trilogy was great for multiple reasons. The funny thing is that Tom Hardy is actually shorter than Bale, so when he suited up as Bane, he wore boots that made him seem taller and more imposing.

Though they act like brother who hate each other on films, Tom Hiddelston and Chris Hemsworth loved chatted and cracking jokes whe the director rolled "cut". Their Thor films were always seen as the fantasy/cosmic space section of the Marvel Cinematic Universe, and the Thor movies also had loads of well-done CGI, special effects, and costume designs, like the ones seen here.

This is a great picture because Director james Cameron is in the water with Leonardo DiCaprio and Kate Winslet. A lot of fans in various forums over the years argued about the claim that DiCaprio's Jack character could fit on the door. After years and years, James Cameron finally said in a n interview that the floating door wouldn't have held them up, and the plot demanded that Jack dies in order for Rose to live.

Not gonna lie, this was actually NOT the craziest thing moviegoers seen when they were watching Total Recall, but it's definitely up there. Imagine being a kid, watching this, and seeing this scene where the guy undoes his trench coat in front of Arnold Schwarzenegger, and fused to his chest is a man-baby! I had nightmares for a whole week, and that's now even mentioning the other insane things that happened in this film.