Celebrities You Didn’t Know Were Star Athletes Once 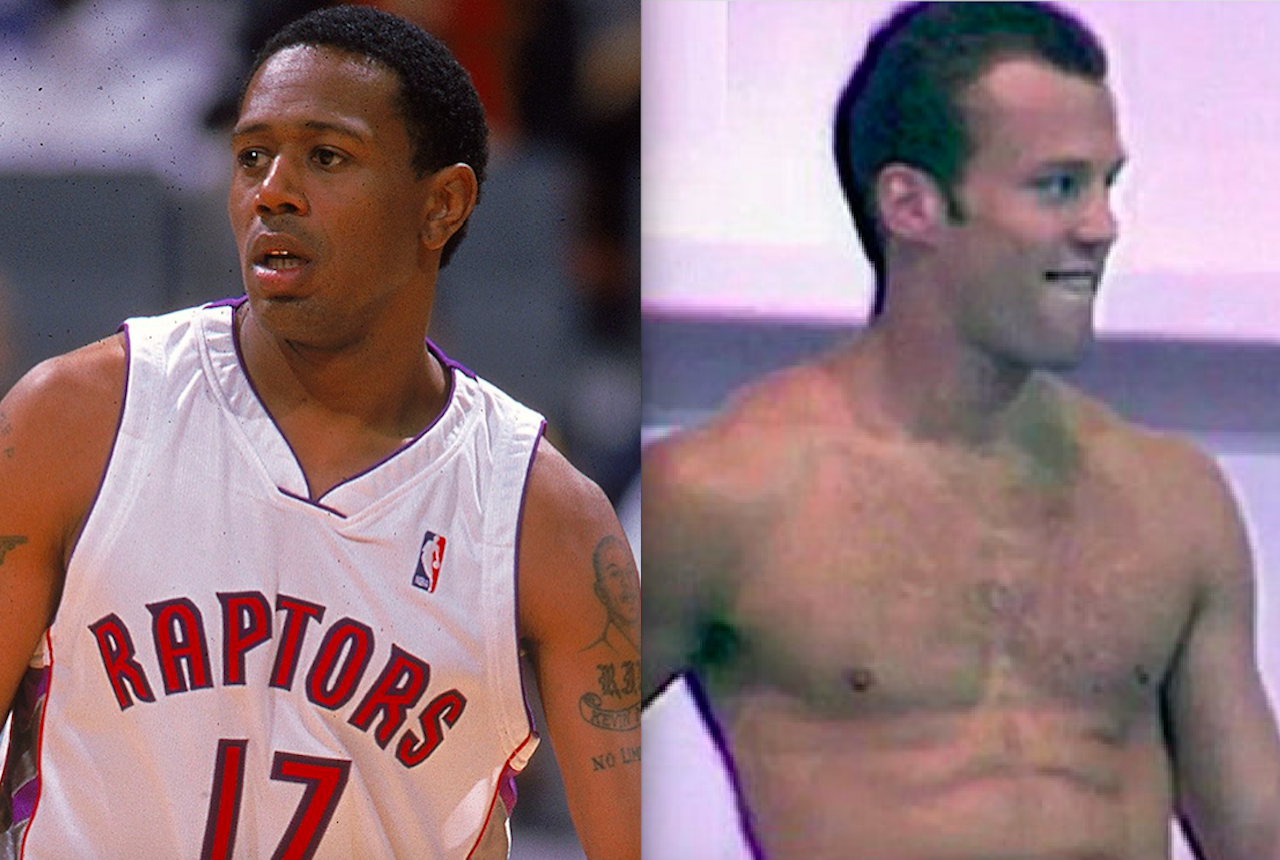 Celebrities who were athletes before hitting it big

There's no singular path to stardom in the entertainment field. For many, the paths goes through the football field, the basketball court, the baseball diamond, the diving board or even the skatepark. Among our list of celebrities who were athletes before hitting it big in another field, some had an injury derail their athletic dreams; others just couldn't cut it in their sport; and others approached or reached the top and went in search of a new challenge. But, no, four-time NBA MVPs who weren't terrible in "Trainwreck" don't count. Sorry, LeBron.

The Oscar winner was an offensive lineman on the undefeated 1968 Harvard Crimson. "Football was a wonderful experience for me. It was a means of, oh, I don't know, sustaining for much of my youth," he said, according to Esquire. "In times of trouble, I've always had football. I always knew I was a football player. And that was a comfort on many occasions."

The "Brooklyn Nine-Nine" star appeared in 32 NFL games from 1991 to 1995, playing for Washington, the Chargers, and the Rams. He told Business Insider in 2017 that football helped prepare him for life as an actor: "I look at entertainment and my football career, the ups and downs, the ins and outs to how hard it was, it really prepared me for entertainment, in that, I could take rejection, I could go to an audition and realize that it wasn't about me and just realize it was about the piece, or realize it was about, you know, you go on a set and you realize who's the star, who's the coach, who's the director, who's the day player, who's the backup."

The Academy Award winner went to St. Mary's College on a basketball scholarship, playing in 97 games over four seasons. As a senior in 1995-96, Ali, then Mahershala Gilmore, averaged averaged seven points per game and shot 39.8 percent from deep. "It was about getting a basketball scholarship to a Division I school," he told GQ in 2016. "Once I got that, I didn’t set a realistic next goal on how to get to the NBA, which is perhaps for the best. I fell into acting. A teacher gave me an opportunity to be in a play and it came a little easy to me. When it got difficult was when I decided to study acting and I went to grad school. I felt like if I got [into NYU] this was what I was supposed to pursue. It just so happened that it worked out."

The comedian and "Community" star walked onto the Washington Huskies football team as a tight end in the early '90s. "He came and worked hard," teammate Ernie Conwell, who went onto an 11-year NFL career as a tight end, told ESPN of McHale. "We kind of prided ourselves on being tough-nosed and hard-working and he fit right in there perfectly with us. He wasn’t great, but he had everything he needed: desire and want-to. He was tough, he could catch the ball and he wasn’t afraid to put his body on the line."

Olubowale Victor Akintimehin was a star running back, defensive back, and returner at Maryland's Quice Orchard High School, earning an athletic scholarship to Robert Morris University. He then transferred to Virginia State University, where he again played on a scholarship before falling out of favor with the coaching staff.

Tauheed Epps attended Alabama State on a basketball scholarship, playing in 35 games overall. "He was a tall, thin kid, very athletic and very good ball-handling skills," 2 Chainz's former college coach Rob Spivery told ESPN in 2012. "He was a very good, skillful player. I always liked big point guards. We had talked about playing him at the point guard position because of his ball skills and his passing and understanding of the game."

The action star, who played the villainous Ivan Drago in "Rocky IV," was the European champion in Kyokushin karate in 1980 and 1981. "Karate has been so important to me, it is almost impossible to imagine myself and my life without it," he said, according to kungfukingdom.com. "Every time I’ve strayed away from the martial arts, I’ve somehow lost part of myself."

Before his iconic turns as Apollo Creed in the "Rocky" films, Weathers was a professional football player. He appeared in eight games with the Raiders from 1970 to 1971, then played for the BC Lions in the CFL before retiring from the sport in 1974 to pursue his acting career.

The rapper accepted a scholarship to play at the University of Houston, but dropped out after a few months of school. Still, he managed to get himself a tryout with the Hornets in 1998, participating in training camp. "I was the biggest star on that team. I should have made that team at Charlotte," he later said of the experience, according to Complex. "My music got me cut from that team. It was politics. The GM, Bob Bass, called me in and said, 'You can play. You are a helluva basketball player, but your music is pure filth and it’s a Bible Belt city.' And they let me go. It wasn’t about basketball. I handled my business." A year later, he played in the preseason as a member of the Raptors.

Cornell Iral Haynes Jr. was a star shortstop in high school, earning MVP honors in the St. Louis Amateur Baseball Association All-Star Game. He got scouted by the Pirates and the hometown Cardinals. "I went to a lot of different camps and stuff like that. Every team brings a camp or two to your city every year," the rapper told ESPN. "A lot of times they send letters out to people they want to monitor."

Before Hafthor Bjornsson was cutting horses in half and crushing dudes' skulls with his fists as Ser Gregor "The Mountain" Clegane on "Game of Thrones," he was a professional basketball player in his native Iceland. The 6'9" center retired from the sport at the age of 20 following a series of ankle injuries, then met Magnus Ver Magnusson, who deemed Bjornsson a quality strongman prospect. In 2018, Bjornsson became the first Icelander since his mentor to win World's Strongest Man.

Pardon me if you're British or a huge soccer fan and therefore are already well aware of Jones' exploits on the pitch. The "Snatch" and "Lock, Stock and Two Smoking Barrels" star played in 254 matches across two stints with Wimbledon FC, winning the 1998 FA Cup as a member of the Crazy Gang.

Before he was asked to take his shirt off in just about every role he's ever had, Statham spent his time competing topless as a diver. He represented England at the 1990 Commonwealth Games in Auckland, where he placed eighth in the 1-meter springboard, 11th in the 3-meter springboard and 10th in the 10-meter round.

Before growing up and winning nine Grammys (and counting), Sheryl Crow was already getting used to leaving others in the dust. While attending Kennett High School in Missouri, Crowe went to the state track championships, where she medaled in the 75-meter hurdles. She kept her passion for running long after high school. "I'm not big about going to gyms. I've been known to work out on a treadmill or StairMaster, but my first choice is really getting outside and running," she said, according to Shape. "That's where I can really clear my head."

Before starring in films such as Tim Burton's 2001 remake of "Planet of the Apes," Warren was a three-time Canadian national champion in synchronized swimming. She was on a path to the Olympics before she got sidetracked by her modeling career. "It was six to eight hours a day," she told The Guardian of training in her youth. "I got up at five in the morning to be in the water by half past five or six. I'd do academic work for three hours each day. You really don't do anything else in your life; it's a very little bubble that you grow up in. And you have to live in that bubble because of the intensity of the sport."

Before he became one-third of Migos, and before he was the star of the 2018 NBA Celebrity All-Star Game, Quavious Marshall was a record-setting high school quarterback. At Georgia's Berkmar High School in 2009, he set a Gwinnett County record for completions in a game, with 28, and led county in passing yards. "Even if he got out of the pocket, he would always keep his eyes downfield," teammate Troy Davis, who went onto a career in the CFL, told Bleacher Report. "I think he liked throwing the deep ball. When he got rushed, we’d be, like, ‘Run for the first down!’ and he’d end up throwing it for 40 yards."

Before he made a habit asking others whether they could smell what he was cooking, Dwayne Johnson was a highly recruited football player who accepted a scholarship to play defensive end for the University of Miami, winning the national title following the 1991 season. Ahead of his sophomore season, he lost his starting spot to a future Hall of Famer. "As a freshman, he came out, and back then we didn’t play too many freshmen," former Hurricanes defensive line coach Ed Orgeron said of Johnson, according to ESPN. "But he was very strong, he had some great practices and we were able to play him as a freshman, and at one point we thought maybe we’d start him as a freshman. The problem with Dwayne was there was a guy named Warren Sapp who came along the next year."

The "NCIS" star started at quarterback for UCLA in 1972 and 1973. In his debut, he led the Bruins to an upset of the nation's No. 1 team, the two-time defending champion Nebraska Cornhuskers. "In so many ways that is what I came to UCLA to do," Harmon, the son of Heisman winner and broadcaster Tom Harmon, told the Los Angeles Times in 2012. "You're 19, you want to be in the tunnel with 90,000 people in the stands, running onto the field with your teammates. When I was a kid running stats at games for my dad, that's what I dreamed about."

Before starring as a self-important dad on "Married with Children" then "Modern Family," O'Neill played football at Ohio University then Youngstown State. The Steelers signed him as an undrafted free agent in 1969, but cut him after two weeks of training camp. With Joe Greene and L.C. Greenwood in the fold, O'Neill tried to make the switch from the defensive line to outside linebacker. "[Training camp] actually went pretty good. ... I actually enjoyed it, and my problem was that I had never played that position before," he told Rich Eisen in 2016. "So I was trying to learn it and make the team at the same time."