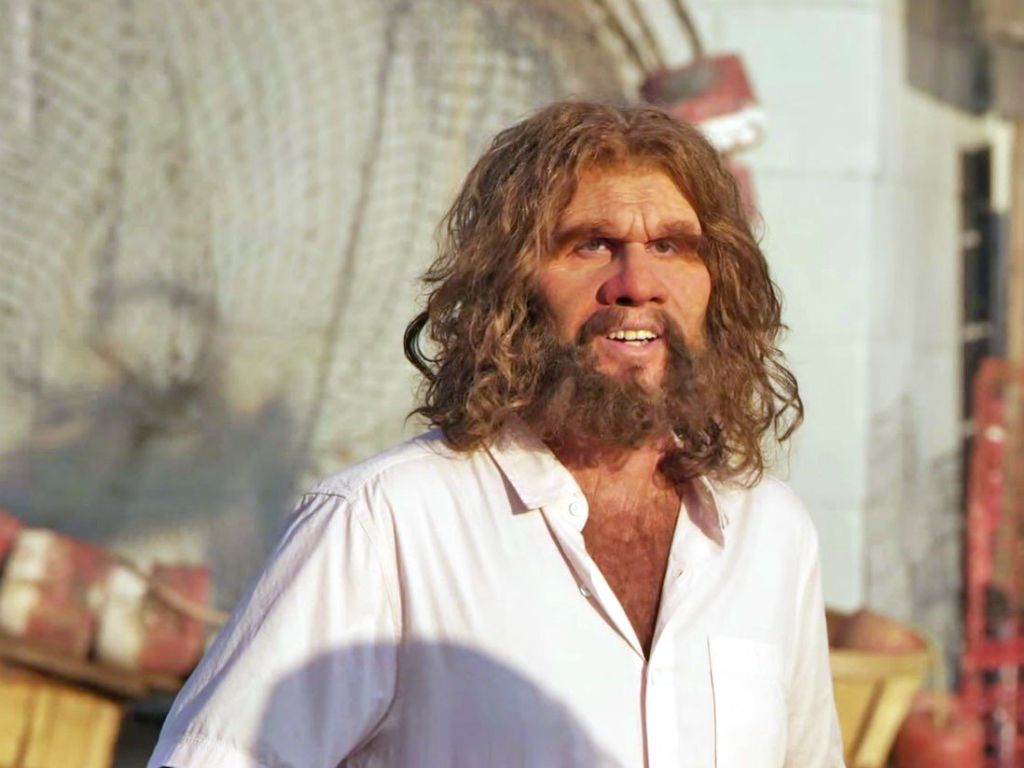 Some actors are willing to spend hours in a makeup chair to entertain you. Let's pay tribute to some of these thespians by seeing what they normally look like...

Han Solo's faithful copilot (don't call him a sidekick), Chewbacca was an instantly indelible character of the "Star Wars" universe since its inception in 1977. You know what he sounds like, even if you don't know how to sound like him.

Over the course of 40 years, the 7-foot-3 actor Peter Mayhew has donned the furry makeup and played Chewbacca in films, TV shows, video games and commercials. He's even visited and cheered up sick children in the hospital while in character. Mayhew retired from the role after "The Force Awakens." The character is now played by Joonas Suotamo.

In Guillermo del Toro's allegorical fantasy masterpiece "Pan's Labyrinth," the Faun acts as a spiritual guide to main character Ofelia in the difficult times faced after the Spanish Civil War. The Faun has a tough, uncompromising moral compass that he tries to instill on Ofelia through the film.

Doug Jones played both the Faun and the Pale Man in "Pan's Labyrinth," as well as many other primarily prosthetic roles in Guillermo del Toro works (including "The Shape of Water" and two "Hellboy" films). Jones has also become unrecognizable to play the Silver Surfer, the Bye Bye Man, and Commander Saru on "Star Trek: Discovery."

Quick Trekkie quiz: Which character has appeared in the most iterations of the venerable space-franchise? It is, of course, Worf the Klingon, who first appeared in "The Next Generation" before crossing through to "Deep Space Nine" and many of the feature films as well.

Behind Worf's heavy makeup is actor Michael Dorn, who currently expresses wishes to play Worf again in a spinoff series, saying his iconic character "hasn't been fully developed and hasn't been fully realized." Dorn also had a recurring role on "Castle" and appeared in two of the "Santa Clause" films.

Appearing in "Star Trek: Deep Space Nine," Odo is a Changeling, meaning he can transform his appearance as he sees fit. Odo works as head of security for the titular space station and impresses with his calm, almost Spock-like demeanor despite his constant search for a solid identity.

Born to Swiss and French parents, René Auberjonois called Odo an essential part of any "Star Trek" series' DNA: "The outsider who looks in at humanity." Auberjonois has appeared in iconic films "M*A*S*H" and "The Little Mermaid," and does voice acting for video games like "Uncharted" and "Fallout."

While overall cultural reception to the "Star Wars" prequel trilogy is mixed, most folks can agree on one thing: Darth Maul rules. He's got a red, double-sided lightsaber. He's got a dope two-on-one fight scene against Obi-Wan Kenobi and Qui-Gon Jinn. And he's got incredible makeup.

Scottish actor, martial artist and stunt performer Ray Park played the villainous role of Darth Maul in body, though not in voice -- that was dubbed in by English comedian Peter Serafinowicz. Park has a history of playing physical, violent and quieter roles, including turns in "Mortal Kombat: Annihilation," "Sleepy Hollow" and "X-Men." Park reprised Darth Maul in "Solo: A Star Wars Story" -- this time, dubbed by American actor Sam Witwer.

In the "Star Trek" universe, the Ferengi are an alien species typically seen as money-driven and greedy above all else. Which is what made Quark, introduced on "Deep Space Nine," such a pleasant surprise. He has elements of these traits, sure, but he's also secretly generous and publicly very funny (even if it's inadvertent).

Armin Shimerman enjoyed playing Quark so much that he even co-wrote a novel about the character. Titled "The 34th Rule," it spins a surprisingly dark tale of Quark's imprisonment in an interplanetary conflict, meant to be an allegory for the United States' internment of Japanese people during World War II.

Do you love TV antiheroes? Characters whose allegiances are always question marks? Who behave with moral goodness or selfishness, depending on how it suits them? Then you'll love Elim Garak, a "Star Trek: Deep Space Nine" character who hides many things behind his friendly countenance.

In addition to his work on "Deep Space Nine," Andrew Robinson has played dark roles in iconic films like "Dirty Harry" and "Hellraiser." He's also directed several episodes of TV, wrote a novel about Garak and even served as University of Southern California's director of the MFA in acting program.

One, two, Freddy's coming for you. Three, four, better shut the door. Five, six, Freddy Krueger is an iconic horror villain introduced in Wes Craven's "A Nightmare on Elm Street" who appears in your dreams and slashes you to bits. That's how the rhyme goes, right?

Much of actor Robert Englund's work has fit within the Freddy-verse, including a curiously meta performance in "Wes Craven's New Nightmare" as both Krueger and himself, the actor who plays Krueger. Beyond "Elm Street," he's appeared in horror flicks like "Hatchet," "Behind the Mask: The Rise of Leslie Vernon" and "Urban Legend."

Be honest: Did you "float" out of your chair when you saw this picture? Pennywise the Dancing Clown is scary as all heck in the current big adaptation of Stephen King's "It." The monster is evil, destruction and (literal) consumption personified. While Tim Curry famously played the character in a made-for-TV miniseries, you may not know who's playing him now...

Hollywood really likes putting Bill Skarsgård in horror joints. Beyond the "It" franchise, he's been in Eli Roth's Netflix show "Hemlock Grove" and the other critically acclaimed Stephen King adaptation running, "Castle Rock." To be fair: Go find the clip of Skarsgård smiling like Pennywise without makeup, and tell us he doesn't belong in horror.

"Hey, you guys!" You heard the voice, right? That iconic warble belonging to Sloth Fratelli of "The Goonies," the film that told us being a weirdo outsider is how you win. Sloth starts the movie as one of the kids' seemingly scarier adversaries, but winds up becoming a sympathetic ally.

Before transitioning to acting, John Matuszak played football professionally with the Oakland Raiders, garnering a reputation for his off-field antics and habitual drug abuse. In playing Sloth, Matuszak even wore a Raiders shirt in some scenes to pay tribute to his former team. Matuszak died at the age of 38 in 1989 from a drug overdose.

The Wicked Witch of the West

"I'll get you, my pretty. And your little dog, too." You heard the voice, right? That iconic sharp, nasal, pure evil pierce belonging to the Wicked Witch of the West, the deliciously campy villain of classic film "The Wizard of Oz." There is no other character that comes close to influencing how modern culture pictures a "witch" than this one.

In real life, Margaret Hamilton was an outright saint. Before becoming an actor, she worked as a public school teacher. After her huge success in "The Wizard of Oz," she gave back to the community as much as she could, serving on boards of education and teaching Sunday school well into her life. She appeared in many TV shows and films through the rest of her acting career, until dying of a heart attack at age 82 in 1985.

"It's so easy ... a caveman could do it." These words, first uttered in 2004, set off a genuine cultural moment, all in service of a car insurance company. GEICO's prehistoric creations were, in fact, milquetoast intellectuals who took offense at the very ads they were in. The commercials were so popular, they inspired a short-lived ABC sitcom, "Cavemen."

Jeff Daniel Phillips appeared in the original 2004 spots, and was the only actor from the commercials to reprise his role in the ABC show. Beyond his Cro-Magnon work, Phillips has struck up a creative partnership with director Rob Zombie, appearing in "Halloween II," "The Lords of Salem" and "31."