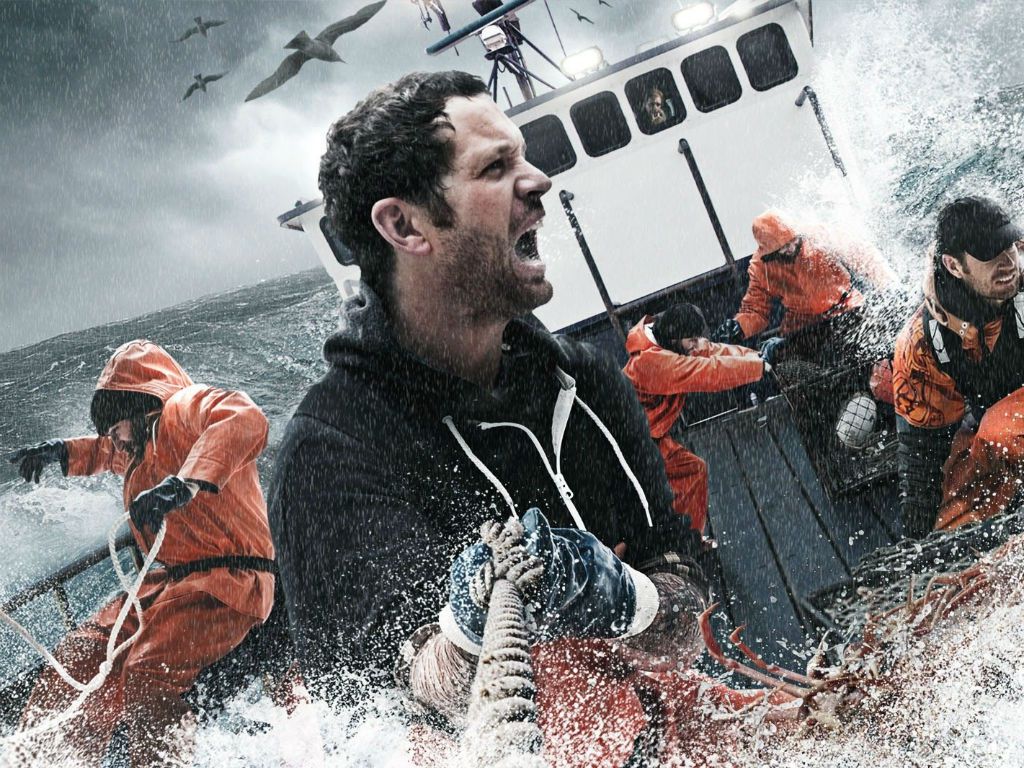 Airing worldwide, "Deadliest Catch" began in 2005 and followed a team of experienced fishermen as they mastered the treacherous seas in search of crab. Lasting for fifteen seasons, the documentary-style show offers and up close and personal look at the dangers and drama the crew encounters during their journeys. Below are a few behind-the-scenes secrets most fans don't know.

In an interview with Captain "Wild" Bill Wichrowski, The A.V. Club discovered just how well the ship crew and the Discovery Channel camera crew get along. "They basically participate with us. They eat with us. They sleep with us" stated Wichrowski, who said he's grown to really like spending time with the cameramen, especially the wheelhouse operator.

During his interview with The A.V. Club, Wichrowski revealed just how focused the cameramen are when it comes to capturing the perfect action shot. The wheelhouse itself is comprised of four fixed cameras pointed in all directions and 2-3 cameras on the deck. "Every shooter carries a camera with them and then there are the GoPros" revealed Wichrowski, which capture "hook shots, shots going over the side, inside the crab tanks."

Most reality shows carry the assumption that most of the drama is heavily scripted for the audience's amusement. While "Deadliest Catch" maintains its honesty in depicting the harsh conditions the crew endures, the show was exposed in 2008 for faking a scene in which it was suggested the Wizard ship was in danger of sinking. Storm waves filmed in October had been "stitched together" with footage of the flooded boat from September to create a vision of horror as outlined in a production document obtained by The Hollywood Reporter.

Anchorage Daily News reported on a 2010 drug-trafficking investigation that led to the discovery of the show's production manager attempting to sell cocaine to an under-cover cop. Seizing $80,000 worth of narcotics and other drug paraphernalia, the Unalaska police charged Matthew J. Schneider with delivering "$300 worth of cocaine to an undercover officer." Reports also suggested Shneider had been secretly recorded and revealed he had cocaine specially imported to be distributed during promotional parties for the show.

A Pirate's Life For Me

Shown to be extremely confrontational with his fellow crew members, Joshua Tel Warner apparently prefers having distance between him and law enforcement. A warrant was issued for Warner's arrest by Oregon police after a string of back robberies from 2007-2009. Mere hours after hosting a press conference, police were able to apprehend their suspect during a routine traffic stop. Worried "his past may come back to haunt him," Warner's attempt at 15 minutes of fame came with the hefty price tag of $30,000 bail.

In 2018, USA Today reported Edgar Hansen had plead guilty to sexually assaulting a 16-year old female during September 2017. Reaching a plea deal, the "Deadliest Catch" star received a suspended jail sentence, paid fines of over $1,000 and was forced to undergo "sexual-deviancy evaluation and treatment." Revealed by CBS News, Hansen admitted to inappropriately touching the underage girl and coercing her into doing the same to him for "my own sexual gratification" and stated he was "very sorry for that conduct."

Edgar's brother Sig became embroiled in a sexual assault case of his own when his estranged daughter accused him of physical abuse. Reported by The Seattle Times, Melissa Eckstrom accused her estranged father of triggering depression, eating disorders, and suicidal thoughts after experiencing the sexual trauma during her childhood. Sig maintained his innocence throughout the trial by stating the accusations were an attempt from his ex-wife to "extort money from me" and ultimately turn his daughter against him.

Sig was involved in another abuse case in 2017 when he was charged with spitting on a Uber driver and destroying his car. CBS News claimed the incident occurred after the driver refused cash payment from Sig who was reported to be "obviously intoxicated" by police who were called to the scene. The fishing-boat captain plead guilty in 2018 and agreed to 40 hours of community service according to The Seattle Times.

Entertainment Weekly reported Ramblin' Rose captain Elliot Neese had been allegedly harassing his ex-girlfriend and threatening to take away their daughter in 2012. In her petition to receive a temporary restraining order, which was granted, Valerie Gunderson cited Neese's drug and alcohol addictions could lead him to "snap[s] so to speak." She also claimed incidents in 2006 and 2010 of physical abuse at his hands. In 2013, Neese was fired from "Deadliest Catch" after a crew member fell asleep on his watch and almost crashed the ship into a block of ice.

Last month, Inquisitor reported that Jake Harris pled "not guilty" to police charges of attempted shop-lifting, possession of drug paraphernalia and an illegal weapon, and driving with a suspended license. Various news outlets including Fox News and Oxygen later stated Harris was sentenced to 18 months in jail and would receive an evaluation regarding his possible drug dependency after his release.

Considered "the best deck hand in Alaska" by Captain "Wild" Bill, Nick McGlashan had worked as a Bering Sea crabber since he was 13. While many of his crew mates saw his hard-work and dedication, they had failed to realize McGlashan struggle with alcohol and heroin addiction until it was almost too late. While working on the Summer Bay, they noticed the deck hand was sickly pale and slurring his words and after discovering his secret stash, "Wild" Bill had McGlashan fired. Now, he credits his public outing with helping him become sober, stating in an interview with Anchorage Daily News, "I lost the ability to work as sea because I forgot how to live on land."

In December 2012, Feleti "Freddy" Maugatai was arrested following a physical dispute at the Grand Aleutian Hotel. The Hollywood Reporter stated the "Deadliest Catch" alum had forced a man into a headlock inside a bathroom and then proceeded to violently shove the man's wife when she tried to intervene. A complaint from the star obtained from TMZ states "Freddy" was merely defending himself after the man had allegedly punched him in the face but was nevertheless "charged with assault in the fourth degree."

All Hands on Deck

While working onboard the Time Bandit during January 2013, David "Beaver" Zielinski suffered serious and life-changing trauma to his right hand and forearm after a motor-style firework prematurely exploded in his grasp. SeattlePi reported Zielinski decided to sue his former employees and this May, has been successfully "rewarded $1.35 million." Due to the severity of the injury-"broken and displaced bones in his dominant hand"- Zeilinski was forced to end his career as a longtime commercial crab fisherman.

Farewell to a Father

In 2012, Jake Anderson suffered the worst tragedy imaginable. His father, Keith Anderson, a retired high school councilor, had mysterious vanished after failing to return home from a trip. After being reported missing, the father's abandoned truck had been found in a remote area of Skagit County. A few days later Komo News reported that Anderson's remains, identified by the King County Medical Examiner, had been found.

Former producer for the show Joe McMahon was shot dead in a driveway next to his Pasadena, California home on July 24, 2015. Reported by USA Magazine, McMahon's lifeless body was found by police who were responding to a call regarding shots being fired in the Chapman Woods area. Pasadena Star News later reported the alleged killer had been found inside his vehicle, heard and seen speeding away from the scene, dead of an apparent self-inflicted gunshot wound.

The cast of "Deadliest Catch" have certainly experienced their fair share of tragedy over the years. Phil Harris passed away after being released from a medically induced coma following a massive stroke in 2010. In 2018, CBS News reported Blake Painter had been found dead at his home in Astoria surrounded by narcotics though no foul play was ever suspected. A full list of the deaths the crew has suffered over the years can be found on People.com.

In July 2017, Fox News reported that a missing ship with six crew members on board that had vanished in the waters where "Deadliest Catch" is filmed had been found five months after its February disappearance at the bottom of the Bering Sea. KUCB later reported in 2018 that the ship, Destination, had capsized due to becoming covered in over 339,000 pounds of ice during its journey.

In 2010, The Hollywood Reporter revealed the Hillstrand brothers were being sued by Discovery for failure "to live up to an agreement to complete a spin-off project." The one-off special, entitled "Hillstranded," would follow Jonathan and Andy's adventures in Alaska. When the two didn't show up for interviews, the producers attempted to call them only to receive an emailed response from the brothers' lawyer stating "they shouldn't attempt any further contact." Discovery then proceeded to sue the brothers for $3 million "for breaching contract."

Despite the show's growing popularity, "Deadliest Catch" is proving to become an annoyance to other crab boats operating in the Alaskan waters. The ships featured on the show, according to Anchorage Daily News, "are willing to lease their quota significantly cheaper than the industry standard" and a rumor persisted that "crew shares for Bristol Bay Red King Crab were $200,000 per man." Essentially, the report reveals that these vessels already earn a sizeable profit from being featured on the show that they can afford "the luxury of undercutting their competition."

A Change in The Weather

Regardless of whether you believe in climate change or not, the simple fact that the waters are getting warmer has forced many of the crab boats on "Deadliest Catch" to stray from their normal fishing grounds and into foreign and possibly deadlier territories. According to a report by Forbes, during the prime King Crab fishing season in January 2016-2017, the Bering Sea was unusually warm. In an article by IndieWire, this sudden temperature change is causing fishermen to come to an off-putting realization that "things aren't working like they used to" and forcing them to alter time-honored traditions when it comes to their precious hunting grounds.

On Land and Sea

The show's success had led to various video game spin-offs including "Deadliest Catch: Alaskan Storm" for Xbox 360 and Windows PC and "Deadliest Catch: Sea of Chaos" for Xbox 360, Playstation 3, and Nintendo Wii. Another installation, called "Deadliest Catch: The Game" is set to be released in 2019 and is advertised on Steam as a game that allows you to "take command of your own fishing vessel, use realistic equipment, combat hazardous Alaskan waters" in an effort to "become the world's best crab catcher!"

This Is Your Captain Speaking

Instead of having a show host, the producers of "Deadliest Catch" opted instead to have a narrator voice each episode's plot. Many fans might have noticed that the voice is different depending on where you live. For American viewers, the narrator is Mike Rowe while those in the United Kingdom listen to Bill Petrie. In Malaysia, the action is described by Nasir Bilal Khan.

In 2016, Discovery introduced a spin-off series entitled "Deadliest Catch: Dungeon Cove" which followed crab fisherman from Newport, Oregon on their hunt for Dungeness crabs. One of the major differences between the two shows was that "Dungeon Cove" featured the fishermans' families more often. The show only lasted for one season, offering only seven episodes in total before being cancelled.

Some of the "Deadliest Catch" fishermen were featured on the 198th episode of "Mythbusters" for their "Crabtastic Special." Testing fisherman-related myths, the team confirmed that taking 20 minute naps every six hours during a 30-hour shift actually increases your performance. They were also able to bust the myth that the 800 lbs crab pots on the ships are indestructible. A detailed description of how each myth was tested can be found on mythresults.com.