Expensive AF Cars Wrecked In “The Fast And The Furious” Movies 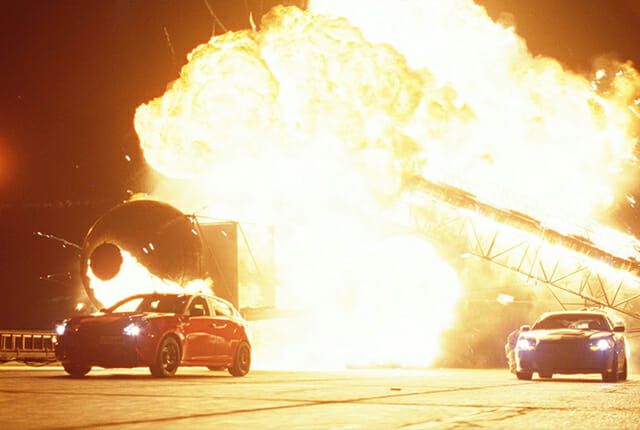 No animals suffered during the filming of the various movies in the Fast and the Furious franchise. But, unfortunately, we can't say the same about all the cars. Because, as you know, crashing cars is common in all the Fast films. And the crashes are half the point. The crashes justify the entire existence of the franchise. They're what get our hearts pumping with excitement. And we need to celebrate them. So here are the most expensive cars they wrecked in The Fast and the Furious. Buckle up.

Dennis McCarthy Is The Man

Dennis' got the coolest job in the world. He built the coolest cars in films like "Man of Steel," "Batman Begins," and "Fast and Furious." The man read car magazines at age 6, and opened McCarthy Automotive in California, so he knows a TON about cars.

Dennis McCarthy built all the expensive cars wrecked on "The Fast and the Furious." If you combine all the cars that have crashed, or exploded, it comes to a total of 1,487 cars, but with 2020's "Furious 9," that number is bound to climb. We simply can't wait for all the testorone-packed action.

The film saw over 230 cars damaged beyond repair according to car coordinator Dennis McCarthy. In fact, in one scene shot in a Colorado mountain pass "destroyed 40-plus vehicles just shooting the sequence," claims McCarthy.

Some of the vehicles used in the making of "Fast and Furious 7" were destroyed for a very good reason. For one thing, if the studio hadn't gotten Bonnie's Car Crushers to destroy the vehicles, they cars would have ended up sold on the black market for an insane amount of cash.

Remember the scene in "Furious 7" where the Lykan Hypersport jumped from one building to the next in Abu Dhabi? Well, the car itself costs a whooping $3.5 million, but not after it was destroyed in the heart-pounding scene that drove everyone's nails into their armrests.

But It Was Nothing But An Illusion

The HyperSport is one of seven cars made by W Motors, and appears at the start of the film. But, the actual sequence was done with six replicas made of fiberglass, which were built by McCarthy himself. The bodies were also made from fiberglass molds, but boy did they look real.

During 2006's "Fast and the Furious: Tokyo Drift," a 2006 Dodge Viper SRT-10 worth $90,390 was destroyed when the car hit a concrete pipe. And while the scene was heart-stopping, we're sure the manufacturer had a heart attack at seeing their creation destroyed.

How It Went Down

In the scene, Sean gets into a duel with Clay, a quarterback, to see who gets to keep the girl, Cindy. While Sean gets into his 1971 Monte Carlo, Clay gets into the Dodge Viper and the two race. But they race into a construction site, causing Clay to wreck his Dodge.

In "Fast Five," not one, but 10 replicas of the 1963 Chevrolet Corvette Grand Sport was destroyed for the scene where Vin Diesel's character drove off the cliff. Ironically, the car was worth 5 million each, which might be a coincidence but symbolizes the fact that it's the fifth movie.

So how did they destroy the 10 Chevrolet Corvette replicas? In the "Fast Five" scene, Dom (Vin Diesel), drives the car off a moving train, with Brian (Paul Walker) who jumped on the car too. Then the two jump off the Corvette seconds before it hits the bridge and goes boom!

The 1969 Dodge Charger Daytona worth $185,692, may not be one of the most expensive cars wrecked on "The Fast and the Furious." But the fact that Dom (Vin Diesel) drove yet another car into a bridge railing leading to it possibly falling off a bridge is pretty ballsy.

In the 6th film, Dom (Vin Diesel) is in a tank chase through Spain, where his Dodge ends up crashing into a railing. The front nose of the vehicle was custom-made by Dennis McCarthy himself using fiberglass to reduce the weight at the front, making the crash more realistic too.

Bullfighting With The Maserati Ghibili

In "Furious 7," Shaw (Jason Statham) uses with Maserati Ghibili, worth $72,850, to go head to head in a bullfight with Dom, (Vin Diesel) who is driving a Plymouth Road Runner worth $94,742 for one of the most explosive showdowns.

In the scene, Shaw's Maserati Ghibli gets its entire front rearranged in a head-on collision, but obviously, Dom's Plymouth didn't look too hot either after the crash. As glass flew everywhere, audiences were on the edge of their seats, wondering if their hero had survived.

With an approximate weight 3900 lbs, the Aston Martin DB9 can go from zero to 60 mph in 4.9 seconds, so it was built for speed. But its front was still vulnerable to the head on collision with Dom's 1970 Dodge Charger. These two should have settled their differences in a ring.

You'd think that Shaw and Dom would have learned their lesson when they crashed their Maserati Ghibili and Plymouth Road Runner into each other. But in the same movie, an Aston Martin DB9, worth $155,000 was totaled in the film, "Furious 7".

At an estimated cost of $54,641 per Dodge, Dom has seemingly crashed his vehicle over and over and over again. But ironically, the car always manages to bounce back, and it winds up looking good as new and in perfect working order.

Dom, (Vin Diesel's character) said he never drove his dad's Dodge charger because it scared "the sh*t out of me." But obviously he got over his fear, and crashed it, rolled it over, hit a bridge, and drove into an explosion with it. But the ironclad Dodge was in mint condition at the end.

What Happened To All The Black Mercedes Benzes?

Cars have to be destroyed, so they don’t end up in the black market. After "Furious 7," several black Mercedes Benzes, ($34,475 and up!) wound up in the graveyard of Richard Jansen, who buys junk cars. He got a call from the crew requesting he haul 30 vehicles off their lot.

The Ford Crown Victoria Crushed It

During James Wan's "Furious 7," several cars, including the Ford Crown Victoria, worth an estimated $4,948, met its maker. It wound up crushed by Richard Jansen's Bonnie's Car Crushers, a company dedicated to destroying vehicles damaged beyond repair.

The Mitsubishi Montero Was Unmarketable

The "Furious 7" film saw to it that most vehicles used were no longer marketable. Since many were destroyed while filming in Abu Dhabi and Colorado, we said goodbye to the Mitsubishi Montero Model. On the plus side, Bonnie's Car Crushers had a good time crushing the hell out of it.