The Untold History of “Seinfeld” 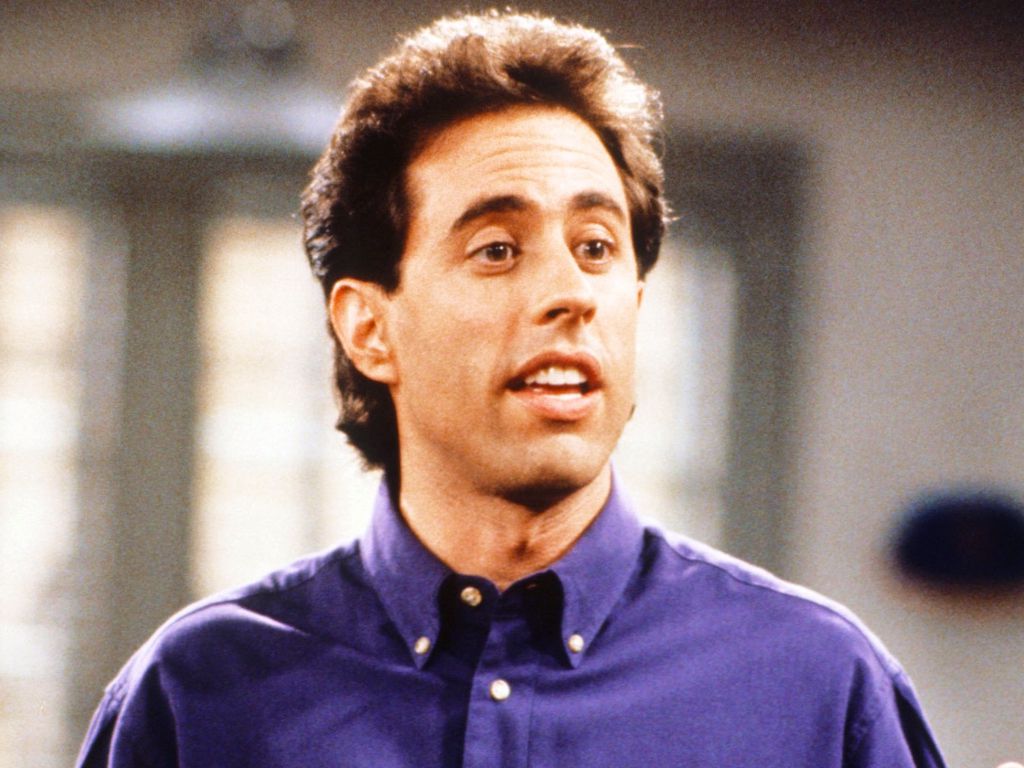 "Seinfeld" is arguably one of the best comedic sitcoms of all time. The show follows the story of Jerry and his three pals bonding and living life in New York City. The show lasted over 100 episodes in nine seasons and, thanks to syndication and streaming services, is still a household name today.

But there are behind-the-scenes facts about the show that many fans aren’t aware of. Jerry Seinfeld himself has recently been sharing many of the stories of the show’s forgotten past, which include hidden secrets about the cast, crew and the show itself.

Elaine Wasn't in the Pilot

The character Elaine wasn't in the original pilot episode of the show, she actually wasn't even written until after it was filmed. NBC executives felt the show was too male-centric, and demanded that Jerry Seinfeld and Larry David add a woman to the cast, thus Elaine was written. She is Jerry's ex-girlfriend who he remained friends with.

George Costanza is Based on Larry David

George Constanza is based off of the co-creator of the show and star of "Curb Your Enthusiam," Larry David. Although, his last name is actually taken from the other co-creator of the show, Jerry Seinfeld's real life friend and college roommate, Michael Costanza. His middle name Louis is homage to Lou Costello of the comedy duo Abbot and Costello.

Seinfeld Didn’t Care Who Was Funny

During a Q&A with fans, Seinfeld revealed the reason why he always played the straight man in scenes with his fellow comedic actors. He said, “I knew it would make the show better. And I didn’t care who was funny as long as somebody was funny and that the show was funny.”

Kramer became one of the more popular characters on the show, so much so that the longer he was on set, the louder the audience applauded. The rest of the cast ended up complaining that the pause for applause was ruining the timing of scenes, so the directors began to ask the audience to hold the applause whenever he entered.

During her appearance on “Comedians in Cars Getting Coffee,” Louis-Dreyfus talked about a time that Seinfeld made her “burst into tears.” It was during the filming of season three, while Louis-Dreyfus was pregnant. Seinfeld couldn’t figure out how to write her pregnancy into the show, so he suggested that her character should become overweight, which upset the actress.

Actor Patrick Warburton, who appeared on many episodes of “Seinfeld” revealed that he was afraid that Jerry Seinfeld didn’t like him during filming. But this fear was extinguished when he received his parting gift after the finale wrapped— a Cartier watch.

The character the Soup Nazi is based off of a real guy that worked at a soup kitchen. The real man is Al Yeganeh, a famously mean and unsympathetic New York soup kitchen operator who has strict rules for his customers. He also was not a fan of "Seinfeld" after he created this character, calling him a "clown" when Yeganeh was interviewed by CNN.

In one episode, Jerry and Elaine go to Florida together and the other two leads are absent from the episode, and Jason Alexander did not like this. He went up to Larry David and told him that if he didn't need to be on set every week he would quit and go back to theatre. David took that note into consideration and George was in every episode afterwards.

Kramer Struggled With the Laugh Track

Seinfeld recently revealed that the entire cast “struggled quite often” with the laugh track on the show. It caused some confusion because some scenes were shot with an audience and live laughs, while others only had canned laughter.

“Seinfeld” was shot at the same studio as “Roseanne,” which lead to a few heated moments between the stars of both shows. When Julia Louis-Dreyfus accidentally parked in Tom Arnold’s reserved space, he left her an angry note that started with, “How stupid are you?”

Festivus Was Not Created by the Show

Contrary to popular belief, George's dad did not create Festivus. The fake holiday was created in 1966 by an editor of Reader’s Digest named Dan O’Keefe. He created it to celebrate the anniversary of his first date with his wife. O'Keefe's son was actually a writer on "Seinfeld" and he added it to the script, and that is how it became a Seinfeld thing.

When Seinfeld was asked on Reddit if there were any story ideas that he had to scrap because they “pushed the limits too far,” he revealed the plot of a forgotten script where Jerry buys a handgun. The episode only made it through its first table-read before it was cancelled.

Most of the episodes are titled after something that happens or is involved in the episode. This was done because Jerry Seinfeld didn't want the writers wasting time on creating witty titles of episodes when they could just be making the episode more funny overall.

The real life Costanza, Michael, actually tried to sue the show for $100 million against Seinfeld, Larry David and NBC. Constanza claimed invasion of privacy and defamation of character and he was seeking damages due to the show’s alleged use of his likeness. The case ended up getting dismissed.

There Was Another Woman

In the original pilot there was another female lead named Claire played by Lee Garlington, a waitress at the coffee shop regularly frequented by Jerry and George. But they eventually changed the location of their meeting place and casting a different lead actress. There are several conflicting stories about this character, including a rumor that she changed her lines too much and another rumor that the character was dropped to add one with more sex appeal. Who knows if we will ever know the real story?

Cosmo Kramer is another character that is based on a real life person. He's based off a man named Kenny Kramer who used to work across the hall from Larry David. In a very "Kramer" situation, the real life Kenny Kramer actually created the “Kramer Reality Tour,” a New York City tour that visits real-life locations featured in the sitcom.

No Hugging, No Learning

Co-creator of the show Larry David followed his own credo for the show claiming it should have "no hugging, no learning;" he didn't want any episode ending with one of those two things. Many sitcoms ended with a heartwarming message and David wanted the show to be different and not be like that at all.

Although David did not play Constanza, the character he is based off of, he did lend a little help theatrically to the show. Mostly, he provided the voice of the character George Steinbrenner, the owner of the Yankees, in later seasons; but he did make an occasional cameo here and there, too.

The Diner is Real

In the show "Seinfeld," the gang always met up at Monk's; and while the name isn't real, the restaurant is. The real exterior of the restaurant is Tom's Restaurant which is on Broadway and West 112th Street in New York City. It is pretty famous thanks to it being on the show and it is still open today.

During the filming of the third season of the show, Julia Louis-Dreyfus was pregnant and Jerry Seinfeld had the great idea of writing a storyline where Elaine just "gets fat." Louis-Dreyfus didn't like that idea; it actually made her cry, so they scrapped the idea. The pair revisited the idea on "Comedians in Cars Getting Coffee" and the actress now admits it could've been a fun idea. In the season, the actress just hid behind furniture and props to cover her stomach.

Newman Doesn't Have a First Name

Newman doesn't have a first name. Even his business cards in the episode "The Package" just say NEWMAN on them. The character actually made his debut appearance in the seventh episode of the second season, but he was voiced by Larry David. Newman's physical debut was not until season three episode fifteen in the episode titled "The Suicide."

They Killed Susan Off on Purpose

You may recall George's fiancée Susan dying after licking some poisonous envelopes, what you don't recall is that the cast wanted it that way. While on the popular radio show "The Howard Stern Show," Jason Alexander confessed that her comedy instincts were constantly misfiring and it was difficult to do a scene with her. The other cast members felt that same way and suddenly Susan was gone for good.

During the time of casting "Seinfeld," Michael Richards, who played Kramer, auditioned for several other shows. He auditioned for another successful television sitcom called "Married... with Children." Richards says he received a callback and probably was "head-to-head" with the other actor, Ed O'Neill, who ended up landing the role of Al Bundy on the show.

George Costanza was Almost Played by Someone Else

Jerry Seinfeld's first choice for George was actually a fellow stand-up comic named Jake Johannsen. He had a very successful HBO stand-up special around the time "Seinfeld" was being created. Johannsen refused the role, despite being “begged” by Seinfeld to do it. No word on if he regrets that decision now.

The Show Was Originally Titled "The Seinfeld Chronicles"

"Seinfeld" was originally supposed to be a 90-minute special including mostly stand-up with Jerry Seinfeld. Larry David and Jerry Seinfeld ended up creating a 30-minute pilot for a show instead and, honestly, that was probably a better decision. The pilot was originally titled "The Seinfeld Chronicles," but from then on out they changed it to "Seinfeld."

Frank Sinatra Passed Away During the Finale

Frank Sinatra's passing actually, in a weird way, had a perfect timing. The legendary singer passed away during the finale of "Seinfeld" and luckily there was relatively no traffic in Los Angeles at the time because so many people were watching the finale, so his ambulance was able to make it to his house and transport him to the hospital very quickly.

Larry David secured a $1.7 billion dollar syndication deal after the show ended. He made $250 million off the show alone in 1998. The amount has been decreasing every year but it will keep paying out until he reaches the $1.7 billion point. The show as a whole has earned over $3.1 billion since it ended in 1995.

The series finale of "Seinfeld" was kept very well hidden. The studio audience included a small group of NBC executives and friends of the show, rather than their normal audience. The audience members had signed a "vow of silence" to not to tell anyone aspects of the finale. Producers also spread fake rumors about the ending that included Newman dying and Elaine and Jerry getting married.

The first ever pilot episode of the show started off with Jerry and George having a conversation about a button. Cut to a few years later, in the series finale, the show ended with the four main cast members in a jail cell and Jerry mentioned George's button, using lines from the pilot episode.

Jackie Chiles, (Kramer's lawyer) who was played by Phil Morris, made a comeback in 2012 on Funny or Die's website in a string of shorts also playing the same character. In newer videos he has a picture of President Obama on his desk and claims "it is none of your business" where he's been. The character is a parody of Johnny Cochran, which is why they have the same initials.