Famous Cartoon Characters That Are Actually Based On Real People

Camila Villafane
Famous Cartoon Characters That Are Actually Based On Real People December 11, 2017 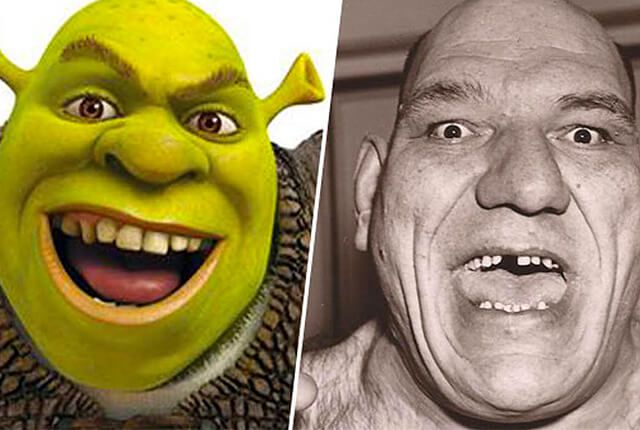 We all love cartoons regardless of whether they're Disney princesses or angry ogres like Shrek. But the inspiration to create these animated characters didn't come out of thin air. Nope. Check out these cartoon characters based on real people, and you'll never see these cartoons the same way ever again.

"Dennis The Menace" might have never existed if cartoonist Hank Ketcham's son, Dennis, hadn't been unruly. In fact, Hank's wife inspired him too. One day, Dennis misbehaved so she shouted "your son is a Menace," which led to him to animate his prankster son.

Many people wrongfully assumed that Tinkerbell was based on Marilyn Monroe when the fairy appeared in 1953's "Peter Pan". But it was actually actress Margaret Kerry. For six months, Jerry posed with props and provided gestures to help animators bring Tinkerbell to life.

The Three Sides Of Jessica Rabbit

The sexy AF vixen from "Who Framed Roger Rabbit?" was based on animation director Richard Williams’ wife, Rita Hayworth. But her hair was based off of actress Veronica Lake. They also sprinkled a little actress Lauren Bacall on top of the sexy character as well.

Hey! Isn't it supposed to be "Popeye?" Frank "Rocky" Fiefel was famous in Chester, Illinois for winning fistfights and smoking a pipe. So, "Popeye" creator E.C. Segar, who is from Chester too, was inspired by "Rocky".

Ursula Was So Devine

In the 70s, there was a drag queen who was literally divine, cause her name was Divine and she was a hit in films like "Mondo Trasho," 1969. So when Disney animators needed inspiration for Ursula, a sea hag in "The Little Mermaid," they got some Divine inspiration.

It's hard to believe these are cartoon characters based on real people, but "Shrek," the ogre, was based off of a French wrestler from the 40s. His name was Maurice Tillet, and he suffered from acromegaly, which made his bones thicken.

Creator Max Fleischer was the ultimate b*tch who stole 1920s actress and singer Helen Kane's look. He also stole the "Boop-oop-a-doop" catchphrase and gave it to his animated creation, "Betty Boop". This really pissed Kane off, so she sued, but didn't win.

"The Simpsons" creator David Bailey based Mr. Burns, the evil and rich Springfield tycoon, on his high school math teacher, David Bailey, from Portland, Oregon. Then, animator David Silverman added the face of FOX founder Barry Diller and the body of a praying mantis to the mix.

In the 1934 film, "It Happened One Night," Clark Gable played Peter Wayne, an unemployed reporter, stranded on the side of the road who munches on a carrot. Cartoon designer Friz Freleng decided to add Gable's mannerisms into the "Looney Tunes" character Bug's Bunny.

Edna Mode, was a strict no-bullsh*t superhero suit designer for the Pixar film, "The Incredibles." But like her uncompromising character, Edith Head, (a Hollywood costume designer and 8-time Oscar Winner) had the same personality and bangs.

When Disney decided to animate the street rat, "Aladdin," they meshed two iconic real-life people together. Not only did they adopt actor Tom Cruise's good looks, but they also sprinkled in a bit of MC Hammer from the waist down, hence Aladdin's baggy pants.

Remember the geeky but loyal Paul from "The Wonder Years"? Well, it turns out that he was the inspiration for Millhouse, who is best friends with Bart from "The Simpsons.” Just like actor Josh Saviano's character was for actor Fred Savage's Kevin.

In the late 80s, actress Alyssa Milano was well known for her role on "Who's The Boss." But it wasn't until she was asked to host a making-of-video for "The Little Mermaid" that she learned she was the inspiration behind Ariel, the teen mermaid fascinated by land.

Redhead, Archie Andrews is now played by actor KJ Apa on the live action-based series "Riverdale." But the Archie character from the original comics was based on American actor Mickey Rooney, who was pretty popular in teen sitcoms in the olden days.

Did you know that "Pocahontas" was a real person? But the real Pocahontas didn't look anything like the animated version. Instead, Disney borrowed the looks and movements from actress Irene Bedard, who also did her voice.

On "Family Guy," Ollie Williams gets to the point when he does the weather. He uses short phrases like "It going' rain!" Fortunately, Al Roker, the famous real-life weatherman, who inspired Ollie is much better at reporting the forecast.

Robin Williams Was A Genie-ous

Directors John Clements and Ron Musker got the late actor to do the voice of the Blue Genie in "Aladdin" by basing the mannerisms and even the facial expressions on Robin Williams. Drawing the actor as a genie obviously worked, and the rest is animated history.

The Band Of Vultures

Did you know that the vultures in "The Jungle Book" were based off of the popular 60s band, "The Beatles"? While their roles in the film were short, but they might have been a bigger hit if scheduling conflicts hadn't prevented "The Beatles" from voicing the characters.

Belle Was A Writer

Belle from "Beauty and the Beast" loved books and dreamed of getting away from that small town. But she got trapped in the Beast's castle one day. Writer Sherri Stoner, who wrote for cartoons like "Tiny Toon Adventures" was the live inspiration for bookworm Belle.

Art Carney's hilarious character Ed Norton on "The Honeymooners" inspired the creation of the sometimes clumsy and oh-so silly animated "Yogi Bear". Then again, where else were they supposed to get inspiration for a talking bear with a tie who walked on two legs?

The Men Behind Wall-E

"Wall-E" may have been the last animated trash collecting robot on Earth, but he was also one of the cartoon characters based on real people. Particularly, French filmmaker Jacques Tati, American actor Buster Keaton, and movie director, Woody Allen.