Greg Smith
Cool Behind-the Scenes Photos Of Directors On The Sets Of Your Favorite Movies March 12, 2018 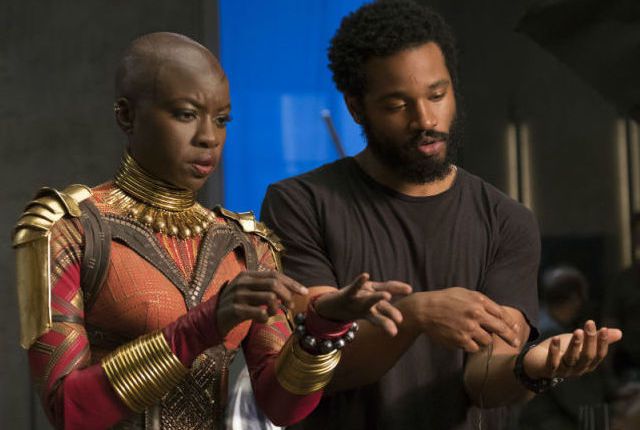 How do movie directors make their day? With the pressure of egotistical actors, fragile writers and bullish execs, how does anyone make a successful movie? For these film directors on set, even when a behind-the-scenes camera points in their face, they just roll up their sleeves and get to work. So grab your press pass. Because it's time to look at the most influential and iconic film directors on set.

It takes a strange alchemy of luck, talent, and timing to craft an iconic film that changes the world. Wes Craven made at least two: A Nightmare On Elm Street and Scream. The latter, a self-aware slasher equal parts chiller and critique (even lampooning tropes perfected by Craven himself), begins with an infamous prologue starring a blonde Drew Barrymore. Yes, Mr. Craven, we like scary movies.

Not gonna lie, this photo is here to amuse us. No matter how shocking or violent a film scene can be, it loses a bit of its provocative luster when you realize it boils down to a bunch of folks standing around figuring out how to do it. Martin Scorsese looks downright perplexed here!

Mary Harron, tasked with adapting a famously controversial, graphically violent novel, knew she had to make it independently to get what she wanted. Some bigger studios interested in financing the project wanted Patrick Bateman to be more sympathetic, or to make it a conventional detective story. Lucky for us, she stuck to her guns.

Pictured here with groovy star Bruce Campbell, Sam Raimi shows us just how young, inexperienced, and headstrong he was when making his first film, the low budget cult horror classic Evil Dead. The shooting experience was nightmarish; at one point, the low temperatures combined with lack of winter clothing meant that Raimi, as he puts it, "started to die."

Orson Welles, the cocky, 25-year-old wunderkind who cowrote, starred in, and directed Citizen Kane, believed in his vision so much that he continued production when he fell down some stairs and broke his ankle. He directed several scenes from a wheelchair, as pictured here. The film, Welles' debut as a director, changed the way we make movies forever.

In adapting Chuck Palahniuk's Fight Club to the screen, David Fincher changed many things. Palahniuk was far from displeased -- in fact, he prefers Fincher's version. "I was sort of embarrassed of the book," said Palahniuk, "because the movie had streamlined the plot and made it so much more effective and made connections that I had never thought to make."

In telling a story about men who go to the jungle and go insane, Francis Ford Coppola went to the jungle and went insane. Apocalypse Now had a famously troubled production. "There were times when I wished I was working for someone else so I could quit," admitted Coppola, "but I don’t think I ever thought of cutting my losses and coming home."

Jonathan Demme - The Silence Of The Lambs

Would you like a side of fries with your human face? The late great Jonathan Demme, who coaxed a stirringly evil performance from Sir Anthony Hopkins as Hannibal "The Cannibal" Lector, traversed through several different genres across his career. From the horror of Lambs, to the prestige drama of Philadelphia, to the concert film shenanigans of Stop Making Sense, Demme did it all.

If you love Star Wars, you have Akira Kurosawa to thank. The Japanese filmmaker, seen here having fun with his cast during Seven Samurai, influenced George Lucas greatly. In Kurosawa's The Hidden Fortress, we're introduced to the world by two low-status characters, a device Lucas stole outright for his space epic.

The Coen Brothers are pretty good directors, ya? Fargo may represent the pureset distillation of their interests -- pitch-black existential comedy, broken men and women trying their best, and abrupt punches of violence. In describing William H. Macy's character, Joel Coen describes the ideal Coen character: "There is something fascinating about his total inability to gain any perspective. He’s one of those people who build a pyramid but never think for a minute about it crumbling."

Spike Lee - Do The Right Thing

Spike Lee's Do The Right Thing, an incendiary joint about a physically and emotionally hot day, shouts its racial ruminations in our face -- sometmies literally. It's also the film Barack and Michelle Obama saw on their first date. Upon hearing this information, Lee told the former President, "Good thing you didn't choose Driving Miss Daisy."

Like Fincher with Fight Club, Stanley Kubrick changed many elements of A Clockwork Orange when crafting his iconoclastic classic. Unlike Palahniuk, author Anthony Burgess wound up hating the film. In his adaptation of the story for stage, Burgess included this stage direction: "A man bearded like Stanley Kubrick comes on playing, in exquisite counterpoint, ‘Singin’ in the Rain’ on a trumpet. He is kicked off the stage."

Kathryn Bigelow's Best Picture winner plays more like a suspense thriller than a typical war movie. This unique tone speaks to Bigelow's attempt to capture the jittery, horrifying realities of bomb defusers in the Iraq war, and "the kind of courage and heroism that is comprised in that psychological profile and the cost of that heroism."

Like father like daughter -- while her aesthetic tends to be slower and calmer than Francis, Sofia Coppola's films also depict descents into a kind of madness. In her second feature, featuring iconic performances from Bill Murray and Scarlet Johansson, she shot guerilla-style in Tokyo, using lightweight cameras to steal footage where filming was not technically allowed.

Penny Marshall - A League Of Their Own

There's no crying in baseball, but we wouldn't be surprised if Penny Marshall's directing techniques resulted in crying on set. She had her cast play real games of baseball, capturing their efforts with multiple cameras. Real-life injuries were plentiful, and Marshall used footage of them in the final cut.

Before The Shape Of Water, there was the shape of "guy with eyes in his hands." Guillermo del Toro perfected his "grotesque imagery as fantastical allegory" with this film. The work is a commentary on Spanish life post-war, including within his monsters, which he "wanted to represent political power."

Don't believe Faye Dunaway -- Barry Jenkins' Moonlight was the best picture of 2017. It's a sensitive, aching, heartbreaking portrayal of love and growth, all done while making a big step forward for representation in cinema. Also, if you aren't following the charming and delightful Jenkins on Twitter, you are doing yourself a disservice.

James Cameron's sequel to The Terminator is bigger, bolder, and -- dare we say? -- better in every regard. Cameron is particularly proud of the staying power of the film's revolutionary CGI work. "Even though it was a 100 million dollar budget," he said, "there was still a lot of ingenuity in leveraging the very expensive and experimental CG effects in the film."

It's the global phenomenon of the moment, making all kinds of money and captivating audiences and critics alike. It's Black Panther, only the third film from Ryan Coogler. In developing the film, the Californian Coogler explored his own ancestry and roots by traveling to Africa.

How many times can one guy change the blockbuster game? If you're Steven Spielberg, life, uh, finds a way. His entertaining, emotional adaptation of Michael Crichton's work features a state-of-the-art blend of CGI and prosthetics, a combination that he thought of when examining unusable stop-motion tests with his children.

It's a little ironic that the Joker's iconic question can be answered by watching the movie around him. Christopher Nolan's "so serious" adaptations of the caped crusader legitimized and jolted comic book cinema, resulting in oodles of money, awards, and acclaim. If only the DCEU had taken the correct lessons from Nolan...

We shouldn't have been surprised that Sir Ridley Scott dramatically reshot All The Money In The World with a new actor just weeks before its release. He's always been one for spontaneity, as evidenced by the infamous chest-burster scene in Alien, completely sprung on the cast without warning.

"I usually make films with $2 and a paper clip," said Ava DuVernay to NPR. On Selma, her budget was slightly bigger, at $20 million. Yet despite dealing with more technical challenges, DuVernay "approached it the same way I approach any scene — what is the story here?"

Psycho revolutionized horror cinema, with its Freudian psychodrama, shocking violence, and unprecedentedly intense editing. Yet Alfred Hitchcock, the master of suspense, seemed to have not taken his film too seriously. "The content as such was, I felt, rather amusing and it was a big joke," said Hitchcock to the BBC. "I was horrified to find that some people took it seriously."

The cooler-than-cool, jump-cut addled Breathless, from French New Wave pioneer Jean-Luc Godard, took cinema's breath away, kickstarting similarly iconoclastic film movements across the globe. Surprisingly, it wasn't invited to Cannes until after its release, and won no awards. If the most French movie ever made can't win the most French film festival, what are we even doing?

Speaking of "cooler-than-cool movies that influenced everyone," Quentin Tarantino's Pulp Fiction remains the director's most straight-up entertaining work. Despite being coated in genre trappings and gangster attire, Tarantino mantains the film is "achingly personal." "People who really know me can see that in my work," he said to the Telegraph.