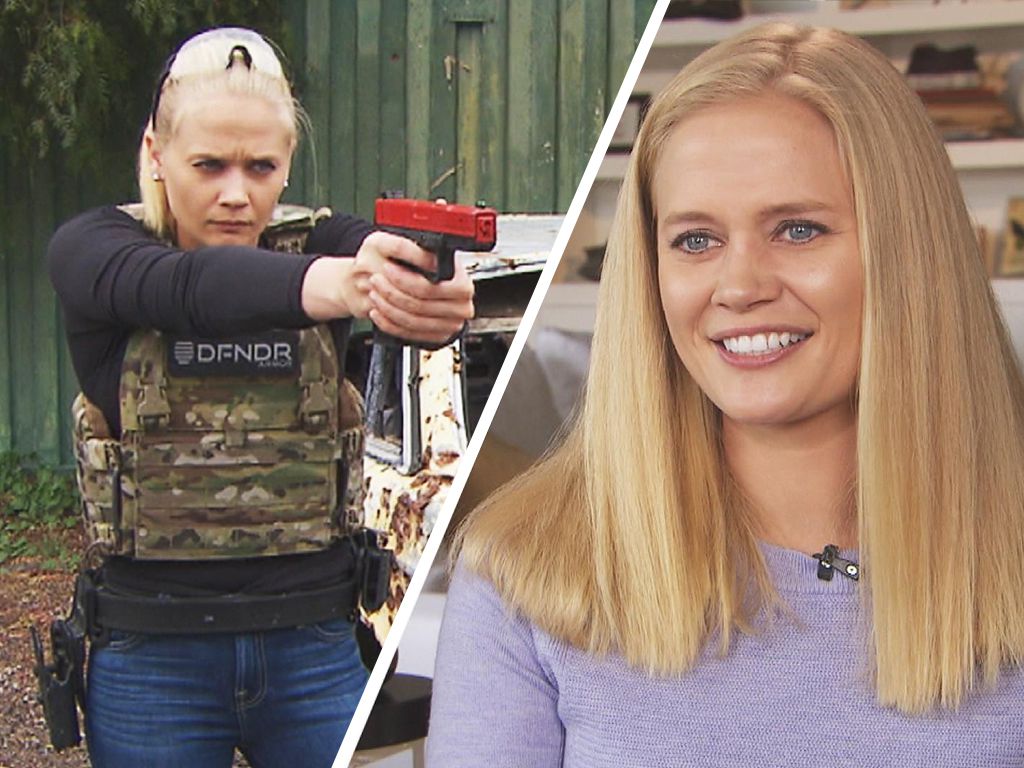 In 2001, viewers were introduced to “Lizzie McGuire,” a show about a timid and clumsy young woman who was trying to fit in. The role was played by actress Hilary Duff, who went on to do bigger and better things, like the TV show, “Younger.” But child actor Carly Schroeder, who played recurring character Melina Bianco on the show, left fans speechless when they discovered what she was up to now.

Although she had been in show business since she was three years old, Schroeder never forgot about the most important things in life; family, stability and the pursuit of happiness. And after leaving the world of Hollywood behind, she found a new career path that left some of her old fans absolutely stunned!

Her Parents Never Intended For Her to Be a Star

When Carly Schroeder was born in 1990, her parents, Paul and Kelli, never intended to put their daughter in show business. But it became clear that destiny had other plans when Schroeder went to her cousin’s audition and mesmerized a casting director in 1993.

Her Mom Gave Her Permission to Model

Her mom, Kelli, had been apprehensive about the idea at first. But then she figured that showbiz could help Schroeder pay for college later in life. So, she gave her daughter the thumbs up to start modeling for companies like Chuck E. Cheese and Sears. And then later her mother realized, she had opened Pandora’s box.

She Jumped Into Acting

By the time she was five, Schroeder was doing television commercials. Two years after that, she nabbed the role of Serena Baldwin on the “General Hospital” spin-off series “Port Charles.” And the industry was so impressed, they nominated her for two Young Artist Awards in 1999 and 2000 as well as a YoungStar Award in 1999. But this was only the beginning.

She Became a Brady

While working on “Port Charles,” Schroeder found other film and television opportunities as well. In 2000, she played actress Susan Olsen, who played Cindy Brady in the 1970’s series “The Brady Bunch.” But her role was for a TV movie called “Growing Up Brady,” which dealt with what happened with the stars of the popular sitcom off-camera. And yet, there was plenty of drama in Schroeder’s next role, too.

She Was Up the Creek Before "Lizzie McGuire"

In 2000, she guest-starred on the teen series “Dawson’s Creek” for two episodes. Eventually, she landed the role of Melina Bianco on Lizzie McGuire. She wasn’t the lead star and yet, her character left quite an impression on fans.

She Played an Enemy-Turned Love Interest

Schroeder’s character, Melina, started out as an enemy of Matt, who was Lizzie’s brother. But eventually, the characters developed romantic feelings for each other. And yet, Melina was only intended to appear in one episode, but she ended up being in 12 episodes over the course of the short-lived 2-season series. However, Melina’s storyline didn’t end there.

She Appeared in the Spin-Off Film

In 2003, Schroeder’s character, Melina, was the only one of Matt’s friends to appear in “The Lizzie McGuire Movie.” Then, she appeared in various other projects such as the TV series “Cold Case” and the film “Mean Creek,” which won an Independent Spirit Festival Award for best ensemble cast. The movie also won a Humanitas Prize at the Sundance Film Festival. And then she took on a role that was simply thrilling...

In 2006, Schroeder appeared in the thriller film “Firewall,” alongside actor Harrison Ford. The “Indiana Jones” star played her father, Jack Stanfield, a man trying to save his family from criminals coercing him to transfer money at a bank he works in. But even this role wasn’t as interesting as what Schroeder herself was destined to become.

She Took Over Her Onscreen Brother’s Place

In 2007, Schroeder took on the lead role in the movie “Gracie.” The film was about a young woman who takes her brother’s place in her school’s all-boys soccer team after her brother passes away. Training for the role was tough, but not nearly as tough as what she ended up doing later in life.

She Had to Prepare for the Part

In order to successfully play the role of a soccer player in “Gracie,” Schroeder underwent an intense three-month training program, which paid off. Once the film was released, critics like Robert Ebert and Richard Roeper gave “Gracie” their proverbial seal of approval. But that same year, she eyed another role.

She Learned to Communicate With Dolphins

Still riding the wave of her previous film’s success, Schroeder wowed audiences again in the 2007 movie “Eye of the Dolphin.” This time she played Alyssa, a teen living in the Bahamas who discovers she has the power to speak with dolphins.

She Broadened Her Hollywood Horizons

In 2009, she took on roles in different film genres like in 2009, when she starred as Sandy Channing in the horror film “Forget Me Not.” And in 2013, she appeared as a main character in the rom-com “Slightly Single in L.A.” But she still had to focus on school in real life.

Her Education Was Very Important, Too

After Schroeder graduated from Thousand Oaks High School in 2009, she attended California Lutheran University, where she earned a degree in psychology and communications and minored in theater. But her focus in school had compromised her acting career.

Her Hollywood Career Took a Dive

After she graduated from school, Schroeder only appeared in the 2015 film “Prep School”, the 2017 film “One of Us,” and the 2018 film “Ouija House,” which earned her a Best Actress in a Dramatic Feature award at the Studio City International Film Festival. Then she got reacquainted with a role from her past.

She Returned to Her Soap Opera Roots

In 2017, Schroeder once again played her “Port Charles” character, Serena Baldwin, on “General Hospital.” The reason behind the character’s comeback was the result of actor Peter Hansen, who played her onscreen grandfather, passing away. So, Schroeder returned to pay tribute to Hansen. Then, she went radio silent in Hollywood.

She Vanished Without a Trace

Schroeder’s last film credit was a 2018 TV movie called “Deadly Shores” where she played Anna. After that, her acting career appeared to have stalled, but that wasn’t the case at all. Still, many fans wondered about her, so, she decided to go on social media and share what she’d been up to.

She Addressed Her Fans on Social Media

In February 2019, Schroeder went on Instagram and shared what was going on in her life. “For 22 years, I’ve played dress up for a living,” Schroeder explained. “As an actress, I’ve been kidnapped, gone blind, nearly eaten by lions and murdered on more than one occasion. I tormented Lizzie McGuire’s little brother on the Disney channel, was a dolphin trainer, the first female soccer player on an all boys team, and Harrison Ford once rescued me during an intense home invasion.”

She Altered Course on Life

“That’s exciting and all,” Schroeder continued. “But in January I decided to raise my right hand and swear into the United States Army.” With Officer Candidate School ahead of her, she prepared for the next phase of her life.

The Number of Cases of Human Trafficking Alarmed Her

Some of her fans were obviously shaken by Schroeder’s shocking revelation. So, she explained that one of the reasons why she joined the Army was that her college education had made aware of “global injustices” like human trafficking that was happening within the U.S.

She Wanted to Help the Helpless

She went on to explain how she hoped her experience in the Army would help her make a difference. “I’ve written papers [and] spread awareness, and as an Army Officer, I intend to learn skills I can later apply when I’m on a team helping these victims,” she wrote on Instagram. But that wasn’t her only reason for joining the Army.

She Wanted to Represent Veterans

Schroeder had a second reason for enlisting. She wanted to become a voice for Army veterans. To that end, she wrote: “Serving my country will give my voice more validity. I can better serve and advocate for veterans once I am a part of their community. The military is a family, and family always has each other’s backs.”

She Came From a Military Family

“My brother is a Marine, and my papa was a Green Beret,” she explained. “There is no way I am going to let the boys have all the fun.” Schroeder then thanked her brothers for supporting her decision to be in the Army. But how did her fans really feel about what she had done?

Her Fans Fully Supported Her

Shortly after sharing what she had been up to on social media, her Instagram followers started voicing their opinions. “Welcome to the Army family. Use that loud voice of yours to tell the Army story and the stories of your soldiers,” one person wrote. Another Instagram user wrote, “As someone also serving, you definitely have my respect and support.”

Training Was Right Around the Corner

Schroeder’s post eventually caught the media’s attention, and she found herself being interviewed by TMZ. And by March 2019, she told her Instagram followers that she was scheduled to begin training in April of that year. But she wanted her fans to keep one thing in mind. “Despite my story being publicized, I want to communicate that the veterans and currently enlisted personnel really deserve the recognition for their sacrifice and service. I am proud to become a part of your family,” she wrote.

She Was Determined to Make a Difference

On September 20, 2019, Schroeder earned a rank of Second Lieutenant and later revealed on Instagram that she signed an eight-year Army contract. She also wrote: “I am determined to make a difference and help others. I have had a lot of people tell me that one person can’t make a difference, but at the very least we should try.”