Surprising ‘Friends’ Cameos: We Bet You Forgot These Stars Were on the Show

Holly Adler
Surprising ‘Friends’ Cameos: We Bet You Forgot These Stars Were on the Show September 3, 2019Leave a comment 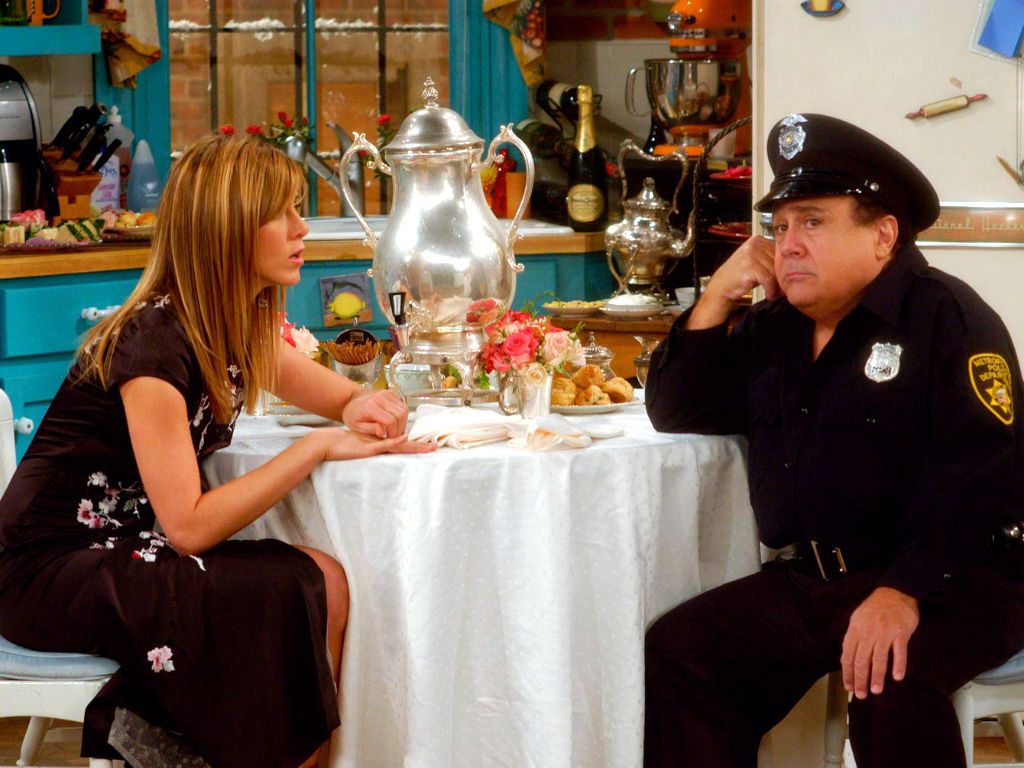 Over 10 years and 236 episodes, "Friends" had countless celebrity cameos: There were dozens of celebrities big and small who appeared on the show, some of whom were already big stars, and some who would find fame much later. So how many of these characters do you actually remember?

Craig Robinson as a Clerk

Craig made an appearance in Season 10, Episode 14, "The One With Princess Consuela" as an office clerk. When Phoebe finds out from him that she can change her name to anything, she changes it to Princess Consuela Banana Hammock. In 2017, Lisa Kudrow and Craig Robinson appeared together in the film "Table 19" playing a married couple.

Sherri Shepherd has starred in countless television series such as "Trial and Error", "Everybody Loves Raymond", and "30 Rock". She did appear in one episode of "Friends" back in 1998; Season 4, Episode 11 "The One With Phoebe's Uterus". She stars as Rhonda who is a tour guide at the New York Museum of Prehistoric History.

Lea DeLaria as a Wedding Guest

Lea DeLaria is now known for playing Carrie "Big Boo" Black on the Netflix original series "Orange is the New Black". However, back in 1996 she made an appearance as a wedding guest on "Friends" Season 2, Episode 11 "The One With the Lesbian Wedding". Lea looks back on her time with "Friends" very fondly, but does say that it was one of the longest days of her career; stating that they didn't get around to filming her scene until close to midnight.

Ellen Pompeo is most popularly known for playing Meredith Grey on "Grey's Anatomy". But back in 2004, she appeared on Season 10 of "Friends" on the episode "The One Where the Stripper Cries". Ellen played Missy Goldberg who was the college crush of both Ross and Chandler.

Jim Rash as an Airline Passenger

Jim Rash is a big character actor that has appeared on shows like "Community" and "Reno 911". Jim is also an accomplished director, producer and writer, even winning the Oscar for Best Screenplay for "The Descendants". In the series finale of "Friends" entitled "The Last One: Part 2", Jim appears as a nervous airline passenger.

Mae Whitman appears in Season 3, Episode 10 "The One Where Rachel Quits". She plays a character named Sarah Tuttle who is a Brown Bird that goes door to door selling cookies. After "Friends", Mae starred in "Arrested Development" as Ann Veal and "Parenthood" as Amber Holt; more recently, she has done voice-over work on "Family Guy" and "Young Justice".

Robin makes a cameo in Season 3, Episode 24 "The One With The Ultimate Fighting Champion" alongside Billy Crystal as Tim. Their appearance on "Friends" was rather serendipitous; both actors were filming on a nearby set and the "Friends" writers approached them about being on an episode of the show. Since the cast of "Friends" was filming that same day, the scene with these two A-list actors needed to be added to the episode and filmed. With this scene not appearing in the original script, most say that the entire scene is completely improvised.

Hugh Laurie as a Gentlemen on a Plane

Hugh was a well-known UK actor during the 1980's and 1990's before having his cameo on "Friends". He had appeared regularly in shows like "Blackadder Goes Forth" , "Jeeves and Wooster", and "A Bit of Fry and Laurie". His appearance on "Friends" was in Season 4, Episode 24 "The One With Ross's Wedding" in which he sits next to Rachel on a flight to London.

In Season 3, Episode 22 "The One With The Screamer" Ben Stiller makes his cameo as "The Screamer". He plays a character named Tommy that Rachel dates for a short period of time before discovering his insanely short-temper. He gets into many screaming matches, even yelling at the chick and duck owned by Joey and Chandler.

Before having a brief cameo on "Friends", Lea Thompson was best known for playing the character of Lorraine McFly in the "Back To The Future" trilogy. Entitled "The One With the Baby on the Bus" from
Season 2, Episode 6, Lea Thompson plays Caroline Duffy which is the same character she played on the TV series "Caroline in the City". Upon meeting Joey and Chandler, she instantly mistakes them for a couple.

Appearing on Season 7, Episode 19 "The One With Ross and Monica's Cousin", Denise Richards plays Cassie Geller. Yes, Geller the same last name as Ross and Monica, which means she is their cousin. Now Monica and Ross haven't seen their cousin in years, so it comes to everyone's surprise that she is stunningly beautiful.

Best known for playing Charlotte on the HBO series "Sex and the City", Kristin had a cameo on Season 7, Episode 7 "The One with Ross's Library Book". Kristin plays Erin, a woman that Joey had a one night stand with that befriends Phoebe and Rachel. Kristin Davis looks back on her time on "Friends" very positively, though she does remember being incredibly nervous of filming in front of a live audience.

Missi Pyle plays Hillary, a woman that Ross dates, in Season 6, Episode 8 "The One With Ross's Teeth". On this episode of "Friends" Ross gets his teeth bleached to a glowing white that is painful to look at in the light. When he goes on a date with Hillary, he finds himself listening intently, as to not show his teeth, but she sees this as a wonderful personality trait.

Brooke Shields is an accomplished model and actress who had a cameo on Season 2, Episode 12 of "Friends" called "The One After The Superbowl: Part 1" . Brooke played the character of Erika Ford, who is known by "Friends" fans as Joey's stalker. Erika is obsessed with Joey's "Days of Our Lives" character Dr. Drake Ramoray. She has great difficulty separating reality from fiction, not knowing how he can be right in front of her and on the television at the same exact time.

It may seem like the perfect crossover of "ER" and "Friends", but the appearance of Noah Wyle alongside "ER" co-star George Clooney is indeed not a crossover. Yes they both play doctors on Season 1, Episode 17 "The One With Two Parts: Part 2" on "Friends", however their names are not the same as their "ER" counterparts. On "ER" Wyle plays Dr. John Carter while Clooney plays Dr. Doug Ross; while on "Friends" Wyle is Dr. Jeffrey Rosen and Clooney is Dr. Michael Mitchell.

On "Friends" Season 9, Episode 6 "The One With The Male Nanny" Rachel decides to head back to work after the birth of Emma, so her and Ross look for a nanny to help with the baby. Rachel hires Sandy, played by Freddie Prinze Jr., after being impressed not only by his qualifications, but by his sensitivity.

Before having a sitcom of his own, "Two and a Half Men", Charlie Sheen made a cameo on Season 2, Episode 23 "The One With The Chicken Pox" of "Friends" as Phoebe's ex-boyfriend, Ryan. He ends up on catching the chicken pox from Phoebe, but it doesn't stop the two of them from spending the night together.

Jane Lynch is a triple threat actress onscreen and onstage. She appeared as a realtor named Ellen in Season 10, Episode 15 "The One Where Estelle Dies". Ellen is trying to sell the house next door to the one that Monica and Chandler just bought in the suburbs. Monica and Chandler check out the house only to discover that the potential owner is Janice, Chandler's old girlfriend.

Dakota played an 8 year-old named Mackenzie in Season 10, Episode 14, "The One With Princess Consuela" of "Friends". Joey joins Monica and Chandler as they look at a house located in the suburbs. As he tries finding flaws in the house, he befriends Mackenzie who is upset that her parents are selling the house. Together they bond over the fact that they don't want their lives to change.

The ever so talented and insanely attractive John Stamos had an appearance as Zack on Season 9, Episode 22 "The One With The Donor". Monica and Chandler talk to a doctor after doing some fertility testing and are are told to consider a sperm donor. Chandler thinks of a coworker who may be perfect. Unbeknownst to Zack, played by John Stamos, Chandler invites him over as a potential candidate.

Rebecca Romijn may be best known for playing the role of Mystique in the "X-Men" franchise and Alexis Meade on "Ugly Betty". But in the late 90's, she had a cameo as Cheryl on Season 4, Episode 6 "The One With The Dirty Girl" of "Friends". When Ross takes her back home, she invites him into her apartment. Here he finds that Cheryl is a person who lacks hygiene, organization, and any sense of cleanliness.

The younger generation may know Winona Ryder as Joyce Byers on "Stranger Things", but she used to be known for her movies "Heathers", "Beetlejuice", and "Mermaids". With all of her onscreen credits, it may be easy to forget that Winona appear on "Friends" Season 7, Episode 20 "The One With Rachel's Big Kiss". Winona played Melissa Warburton one of Rachel's sorority sister's from college. At the end of the episode, Melissa confesses her love to Rachel.

The incomparable Jeff Goldblum makes an appearance as Leonard Hayes who is a extremely handsome and popular actor, honestly sounds like typecasting. In Season 9, Episode 15 "The One With The Mugging", Leonard is directing and starring in a Broadway play and he has Joey come in to audition.

Selma Blair starred as Vivian Kensington in "Legally Blonde" before making a cameo on "Friends" Season 9, Episode 10 "The One With The Christmas in Tulsa". Chandler's co-worker Wendy, played by Selma, helps him out as they work through the holidays. Later in the episode, she expresses her attraction to him and doesn't mind that he is married.

Sean Penn appears in two separate episodes of "Friends" as Eric. In season 8, episode 6 "The One With The Halloween Party" he is engaged to Phoebe's twin sister Ursula. He appears in the following episode as the same character, but goes on a date with Phoebe after breaking it off with Ursula. According to some sources, Penn appeared on "Friends" because his kids loved watching the show.

This Oscar award winning actor, who is also known as one of the greatest actors on stage and screen, appeared in the final two episodes "Friends" Season 7. He was in episodes 23 and 24, "The One With Monica and Chandler's Wedding: Parts 1 & 2". Gary played the role of an actor named Richard Crosby who acted opposite Joey in his World War 1 film. Richard overly articulates his lines to the point where he constantly spits in Joey's face.

Danny DeVito as Roy the Stripper

Probably one of the best celebrity cameos, Danny DeVito as Roy the Stripper AKA Officer Goodbody. He makes his cameo in Season 10, Episode 11 "The One Where The Stripper Cries". DeVito explained that he got the cameo due to being next door neighbors with Jennifer Aniston at the time. He said in an interview recently, that he wanted to take off more clothes, but wasn't able to go that far.

Jill Green is Rachel's younger sister who makes her first appearance in Season 6, Episode 13 "The One With Rachel's Sister" and the following episode, "The One Where Chandler Can't Cry". Jill arrives at Rachel's apartment with the hopes of starting a new life for herself. Despite their onscreen rivalry, Jennifer Aniston and Reese Witherspoon are really close friends. The actresses will appear together in a new TV series for Apple TV+ called "The Morning Show" which will premiere this fall.