These People Think Their Horrible Tattoos Are Cool, But They’re So Wrong It Hurts

Camila Villafane
These People Think Their Horrible Tattoos Are Cool, But They’re So Wrong It Hurts October 4, 2017 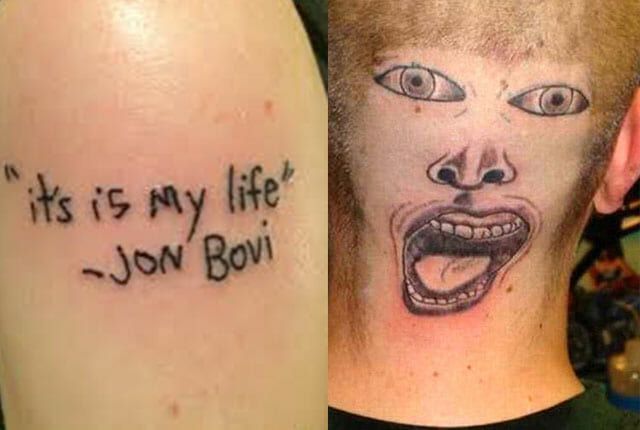 Beauty fades, but tattoos are forever. So, think about that the next time you decide to get inked. Too bad these poor souls didn't have someone who could knock some sense into them, which led them to pick out some horrible tattoos that seemed awesome at the time, but really weren't.

The thug life, man? Um, no. More like the "hug life" because that super cute girly Hello Kitty tat makes you want to squeeze him and never let go.

So gentlemen might prefer blondes, but they sure as hell don't prefer them deformed. How did this tattoo artist got his license, again? Oh, he didn't? That explains it.

Maybe Jesus didn't tap out, but he sure as hell looked the other way in total shame.

Try This In The Hood!

So you think you got white boy swag? Why don't you give this tat a test run and walk without a shirt in the projects?

I mean, there's fans, and then there's F-A-N-S. But look at the bright side! At least it doesn't say "Iggy Azalea."

It's bad enough that the original photo is a pixelated selfie of a chick in a bathroom. Now this poor tattoo owner is going to have to explain to the whole world why he got a duck-faced monster inked on his skin.

To commemorate this person's love for his pet, his tattoo artist decided to spend hours drawing, outlining, and designing a spectacular tattoo. Just kidding! It's so bad it might make your eyes bleed.

For some reason, this deformed monster that's eating a sock ended up in the arms of one unfortunate sucker. Given the many awful tattoos we've seen so far, we're willing to bet this has nothing to do with the original pic. Say no to tattoos of human faces!

My One And Only

This person obviously wanted an inspiring tattoo that depicted his loving relationship with Jesus. The only problem is it ended up looking more like a couple that's all over each other instead. Ew!

Legends live on, sure, but "ledgens" go back to college to relearn a few things. Hell, they might need to go back to kindergarten. A 5-year-old has better spelling than this.

Oh, honey. This tattoo is all kinds of wrong. The so-called artist managed to turn an adorable little girl into a burned-out critter.

This guy's tattoo is missing a letter, but that won't stop him from being fearless and proudly showing it off. To each their own, I guess.

Yes, you're better off being totally "ridiouculous" as it's obviously working for you so well.

That awkward moment when you're too drunk to think straight, but you decide to ink your own tattoo while under the influence. There's no way a sober person would do this.

Poor thing. The sky's the limit to those who dream, but in this case, the limit's the sky.

Guys, seriously. Who's this "Tomarrow" person on this one's wrist? Oh, they meant "tomorrow"! Well, clearly, the tattoo artist doesn't know anything either.

On the downside, no one will ever take this guy seriously as long as he has this face tattoo. On the plus side, Ryan Murphy could hire him for "American Horror Story: Cult."

Clearly, remembering how to spell was a low priority. Maybe the artist just needed a bigger arm, but decided to shorten the character like they do on Twitter.

You need lots of courage and plenty of "strenth" to get a tattoo. But, clearly, intelligence is overrated, and so is a basic education.

It's all romantic and brings a tear to your eyes. But what are these two going to do when it doesn't work out and they go their separate ways?

Somewhere out there, the creator of contact lenses is rolling over in his grave. Why tattoo a pair of glasses when you can buy one you can take on or off?

In the ways of horrible tattoos, this one isn't too bad. But it'd be even cooler if that close-up of that wolf howling didn't look like it just got shot by a silver bullet.

Good luck with trying to land a new job with those on your face. You'd better hope that your natural brows can cover that up, cause laser surgery is a pain.

It looks like someone had targeted this woman's eye. Or were they targeting her horrible taste in tattoos? In any case, even her newborn baby is looking at her and going, "Mom, what did you to yourself?"

Apparently this guy really liked Harry Potter's lightning symbol, so he tattooed it on his forehead. Too bad the tattoo artist never bothered to see the movies and had no idea what he was doing.

Well, when you put it like that then the answer is no! Uh-uh! Never! We can't even believe that this photo even exists. Some people have no self-awareness.

That's a double negative, so you're telling us to just give up. Why didn't you say that in the first place? It could have saved us all a lot of trouble.

If Michael Jackson were alive to see this, he might die all over again. This is just heresy. No true MJ fan would ever show this off. Can't we all just let MJ rest in peace?

Hmmm. Really? Then it looks like God really is one of us and has taken a side job as a tattoo artist with a wicked sense of humor. We sure hope you have the money to laser that out.

Proof Before You Ink

It's is your life. And it's is your arm. So maybe next time look for a tattoo artist that's actually finished high school, or can spellcheck before ruining the name of the coolest lead rock singer.