Camila Villafane
A Look Inside This Abandoned Hollywood Mansion Reveals Priceless Treasures Among the Ruins December 4, 2019Leave a comment 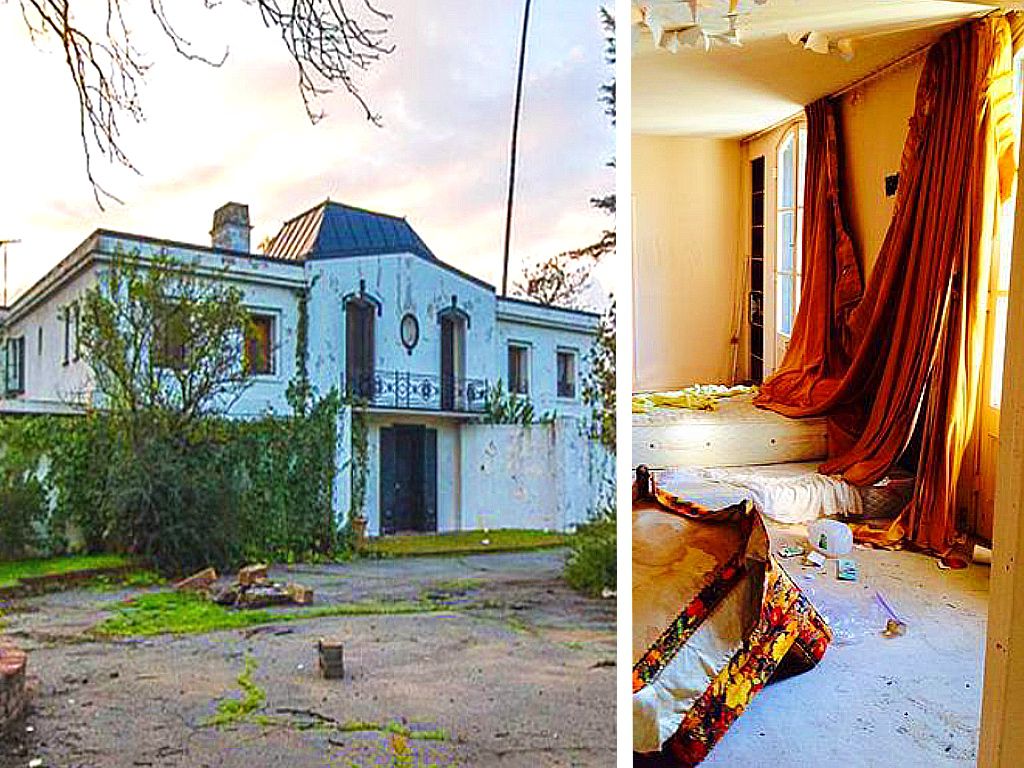 Beverly Hills, California is littered with high-cost mansions and luxury homes. But one has been sitting abandoned for decades without anyone inhabiting it but homeless passersby and urban explorers. The past owners of this home were Hollywood royalty (Liza Minnelli grew up there!) and when they left, they didn't just leave behind memories...

Under the blankets strewn across the floor and beside the mountains of papers piled on the floor, something caught this explorer's eye that was left behind by a previous owner. Could it be that one of the biggest stars in the world left something behind?

The Mansion Was an Eyesore

Mansions in Beverly Hills are known for their elegance and lavish reputation, and why wouldn’t they be? They’re owned by society’s elites. Some of the most popular movie stars and richest business owners live side by side. Now, if you don't live near this posh neighborhood, you probably assume that every single house is a stunner, but that’s not actually true.

A Home That Was in a Class by Itself

A woman known only as Kayleigh found something on the southeast corner of West Sunset Boulevard and North Crescent Drive in Beverly Hills. It was a mansion unlike any other mansion she'd seen in the area. The property looked a bit rundown. But what was this eyesore doing here? Kayleigh wondered before getting a bit closer...

There Was No Information on the House

She took a photo of the house and sent it to a fellow tipster from a site dedicated to urban exploring. There was very little information about the property itself but it was obviously the coal among a neighborhood of diamonds. It couldn't be possible that someone was living in there, right?

He Needed to Know More Information About the Mansion

What the tipster needed was the lowdown on the house, so he turned to someone named E.J. from the Movieland Directory website, who was a fellow writer on the site. He figured that if anyone had any information on the mansion’s history, it would be him, but could he really help?

The Home Was Drawing Him In

It turns out that he was right!. E.J. did have valuable information on the mansion’s history to share. The house looked completely disheveled and creepy. There was some mysterious force drawing the tipster to the house. Whatever it was, he just couldn’t resist it. But what would he find when he got there?

He Decided to Take a Closer Look

He drove all the way to the house, which appeared to be abandoned, but that didn’t necessarily mean that it was. The tipster has since driven by the house several times and eventually saw signs that there might have been life inside those walls after all.

There Were Signs of Life

What he discovered left him shaken to the very core. There were torn drapes in one of the upstairs window, which meant that squatters, (or maybe a ghost?) had taken up residence at this 5,800-square-foot estate. But why would anyone abandon such a valuable piece of property?

The House Was Almost a Century Old

A bit of digging into the home’s history revealed that it was originally built in 1925 and redesigned by Hollywood Regency Architect John Elgin Woolf. And as it turns out, the house came with a juicy celebrity backstory.

It Belonged to a Famous Director

The house was owned by Vincente Minnelli, a famous Hollywood stage and screen director. Perhaps, you didn’t notice something familiar about the last name. But Minelli has a connection with a Wizard of Oz star who later took his last name. Did you guess who it is yet?

He Was Married to Judy Garland

Minnelli married "The Wizard of Oz" star Judy Garland in 1945. They married just a year after Minnelli directed Garland in the 1944 film "Meet Me in St. Louis." The two had three children together, including daughter Liza Minnelli, who spent most of her childhood in this home, which was now starting to look inhabitable.

He Left the Home to His Favorite Girls

Minnelli passed away in the Beverly Hills home in 1986, but left the two women he loved in charge of his estate. One of them was his current wife, Lee, and the other was his daughter, Liza Minnelli. This history gave Kayleigh and her fellow explorers more questions than answers. Was Vincente haunting the place from the other side?

Liza and Her Stepmom Had a Tiff

In 2000, Liza Minelli put the house up for sale and allegedly offered to buy her stepmother a condo. But her stepmother refused, which led to an all-out war that would make the battle between Dorothy and the Wicked Witch seem like a walk in the park.

Minnelli’s widow, Lee, refused to leave the house, so Liza stopped paying the staff and the electric bills. That same year, her stepmother sued her for "breach of contract, elder abuse and emotional distress" for attempting to kick her out. But who won in the end? And how did this home get lost in the shuffle?

New Buyers Had to Wait to Move In

In 2001, the lawsuit was dropped. Then an elaborate and complicated deal was struck with the home’s new buyers. The arrangement allowed Minnelli to pay them rent in exchange for allowing her step-mother to live there until she passed away. Then, the new owners would be able to move in. But how long did they have to wait for that to happen?

New Owners Were Too Indecisive

When Minnelli’s stepmother passed away in 2009, the new owners discussed restoring the mansion. Then they considered razing it, but neither of these things happened and the house remained a squatters’ hotel. But what did it really look like on the inside?

Urban Explorers Broke Into the Mansion

In 2014, an urban explorer picked up where Kayleigh's adventure left off. A Youtuber named Adam took a look inside the Minnelli Mansion. It’s not the first time he’s done this. He has a knack for climbing into abandoned locations and recording a tour of interesting locations. But this was by far the creepiest tour he’d done.

He Read the Warning But Ignored It

As Adam toured the exterior, it was evident that no one had been there in a while. The grass was knee-high and the trees and shrubs partially covered the wall fence. But was it really abandoned? There was a wooden gate with the words “Beware of Dog.” But Adam doubted he'd find a dog still living here after all this time. But he couldn’t shake that eerie feeling that he was not alone as he made his way deeper into the estate.

He Found Vintage Items Scattered On the Floor

After entering the home, Adam and his cameraman were immediately met with the stench of mildew, but that was easy to ignore as their eyes took in a sight few would ever see. The house wasn't in immaculate condition, but it was easy to see that the people who lived in this home had a full life by the possessions that had been carelessly thrown around by earlier visitors.

The Pool Was Not Fit for Swimming

They made their way to the pool area, which had undoubtedly been the source of fun and tons of fancy Hollywood parties back in the day. But now, the pool was virtually empty except for some dirty water in the far corner. But would the home’s interior look just as bad?

They Took a Peek Through a Broken Window

Adam found a broken window and took a look inside. Some of the kitchen cabinets were left open. For the most part, everything appeared to be intact. But they had no idea what awaited them once they got inside.

The Floors and Walls Were Deplorable

They made their way into the house and found a room with wall shelves and wooden paneling intact. But the floor was dirty and the walls were moldy. And it only got worse from that point on.

But the House Still Had its Charm

Although the interior of the house was filthy due to being exposed to nature for many years and not being looked after for a decade, it was easy to see the original charm of the home. The pastel furniture was still in tact and if the floor length mirrors in the living room were shined, they would be as gorgeous as they were when they were installed.

No One Had Lived There in Decades

One of the most obvious signs of the age of the home was the collection of vintage technology and other old items in every room. The old television set must have dated back to the '80s, but the other old items they would find would make them take a step back and question their value...

Priceless Items Placed Next to Garbage

This home may not be so interesting if we didn't know who lived in it. The fact that some of these items may have belonged to the film legend Judy Garland gives them an incredible worth. Some of her personal belongings like scripts and records were sold at auction in 2017 for thousands.

There Was a Message on the Wall

They traveled up the rickety stairs and were greeted by some sort of writing on the wall. As they got closer, they realized it was a name. Someone had scribbled down "Judy Garland" in cursive. Had it been Judy’s ghost or a fan who still walks the mansion’s halls? If this was a genuine signature, it would be worth tearing the wall down and framing the drywall for the thousands of dollars this would fetch at auction.

The Master Bedroom Was Barren

The master bedroom was undoubtedly lavish decades ago, but it had seen better days. There was an old floral printed couch and some tattered drapes. But the expensive bed, night tables, and lamps that were once a part of this place were no more.

The Ceiling Was Falling Apart

The wall materials had started to peel, but when they shifted the camera upwards, the footage showed that the ceiling hadn’t faired any better. It looked like peeled paper. But were there any valuables left behind in the home’s closets?

They Searched the Closets

Unfortunately, the closets didn’t have anything of value inside. There didn’t seem to be any life in the mansion either. More like an echo of life. The remnants served as a reminder of the family who had once called this place home. Then Adam and his cameraman jumped back when they saw clones of themselves.

Someone Had Been Here Already

They soon realized that their doubles were their reflections against the dirty mirror wall that framed an old fireplace. There was evidence that someone had lit a fire recently. But they didn’t find anyone living or otherwise. Only the distant memory of what once was still remained. The mansion is a creepy shadow of its former self, but it holds priceless memories of a time long past.