These Valuable Movie Props Were Lost for Years Before They Resurfaced

Camila Villafane
These Valuable Movie Props Were Lost for Years Before They Resurfaced November 7, 2019Leave a comment 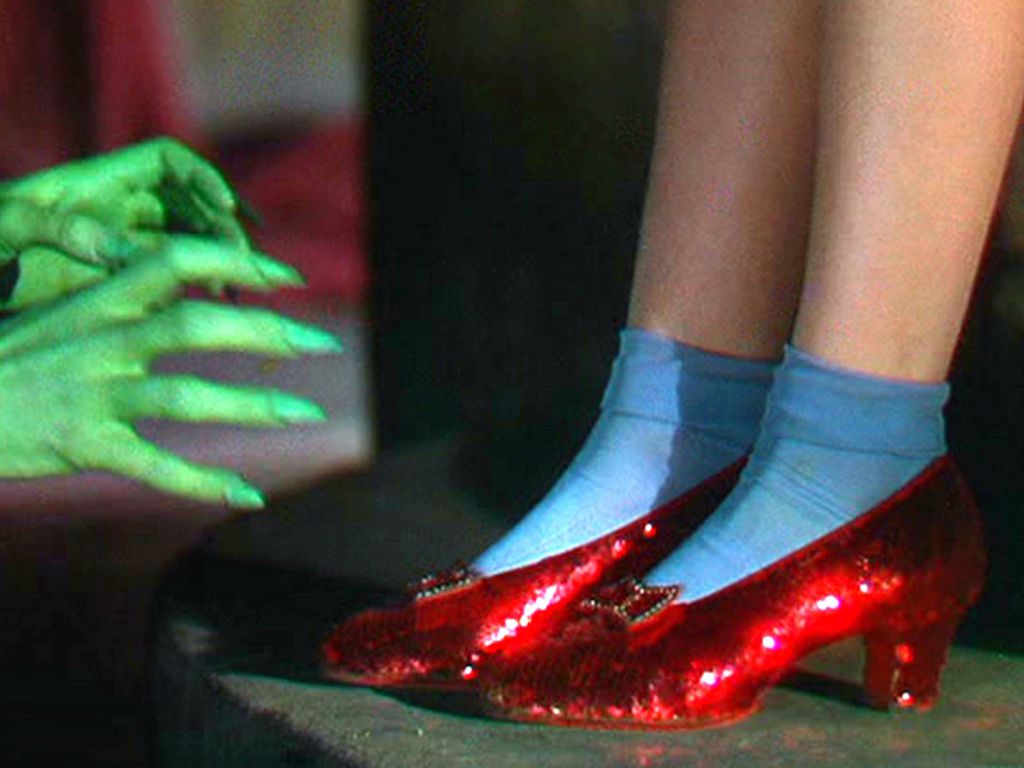 Where would Dorothy be without her ruby slippers? What setting is more iconic for "Star Wars" than the Death Star? Sadly, once a movie is over the props tend to disappear. Some of these items were worth hundreds of thousands of dollars and got repurposed or tossed in the trash before being rediscovered.

"Star Wars" Death Star Was Used As a Trash Bin

The Death Star model used in “Star Wars: A New Hope” was lost after the studio ordered every prop to be discarded. But employee Doug W., kept the Death Star model. A decade later, he stored it in mother’s antique shop (where it was often used as a trash bin) until Todd Franklin saw it and called Lucasfilm to confirm its authenticity. They told Franklin that the model was destroyed. But he was convinced it wasn’t. Sadly, when he went to the antique shop to buy it, he learned another customer named Mark S., had bought it and displayed it at a country music show called Western World. When it shut down in 1993, Franklin, his brother Pat, and his friend, Tim, were finally able to buy the Death Star.

Spaceship From "Alien" Was in a Driveway

The Nostromo spaceship from “Alien” weighed over 500 pounds and took up about 80 square feet. When producer, Sci-Fi enthusiast, and prop collector Bob Burns called 20th Century Fox for permission to do a Halloween show with an “Alien” theme, they sent him some movie props, including the Nostromo, which was lowered into his driveway by crane. It sat there for almost two decades, exposed to the elements. But in the late '90s, it was restored to its original greatness.

The fourth fiberglass shark used in the 1975 film “Jaws” was dubbed Bruce. The studio sold it to a junkyard owner named Sam Adlen. So, Adlen mounted the shark in a spot overlooking the yard. A few years later, his son, Sam, inherited the junkyard and donated the 25-foot-long, 12.5-foot-wide, and 8-foot-high shark to the Academy of Motion Picture Arts and Sciences.

In 2005, someone bought the original puppets from “Rudolph The Red-Nosed Reindeer” TV special. After the special, an employee gave the props to her kids. 40 years later, the employee’s nephew found Santa and Rudolph and took them to the Antiques Roadshow where they were valued at about $10,000. The nephew sold them to another owner who restored them to their original beauty.

Quentin Tarantino’s 1965 Chevy from “Pulp Fiction” was stolen outside his home in 1995. The car was abandoned in Oakland, California, and eventually bought by someone 10 years later. The new owner had no idea it was stolen, but spent over $20,000 restoring it. When the truth came out, the car was returned to Tarantino.

Former Warner Bros. And Sony Security guards Jeffrey Glenn Gustafson and Robert Hughes were arrested on suspicion of stealing Batman and Spider-Man suits from the movie studios. Four Spider-Man suits worth $200,000 in total had been taken. The fourth Spider-Man costume was traced all the way to Japan.

The Maltese Falcon Was in a Restaurant

In 2007, one of the Maltese Falcons used in a 1941 Humphrey Bogart film was taken from John’s Grill restaurant in San Francisco, California. The restaurant’s owner, John Konstin, had bought the statue from an actor who played a henchman in the movie. Left with no choice, Konstin spent $25,000 to create a bronze and lead replica of the bird.

"Stuart Little" Painting Had Been Missing for 90 Years

In 2009, art historian Gergely Barki spotted an expensive painting above the fireplace while watching the film “Stuart Little” with his daughter. The painting had gone missing for 9 decades. It was allegedly sold in 1928 and taken out of the country after World War II. Barki reached out to the film’s set designer who told him the painting called “Sleeping Lady with Black Vase” had been hanging on her wall all this time.

If you’ve seen the original “Charlie and the Chocolate Factory,” then you’re familiar with the Scrumdiddlyumptious Bars. Thousands of them were allegedly made, but after the movie was done, they were tossed in the trash. But a man named Gregor Gee saved a lot of props, including what may be the last bar in existence.

The Emerald City Was in Storage

When “The Wizard of Oz” sets were made, they hired people to paint a giant matte backdrop to give the impression of the Emerald City in the distance. But when a cartage company cleaned out the lot after production had wrapped, they kept the backdrop in storage. The Emerald City was eventually sold for $44,000.

Gone With the Wind Dress Was Sold 6,000 Times It’s OG Worth

In the 1960s, an employee at Universal Studios named James Tumblin noticed some dresses on the floor while doing research at The Western Costume Company. In the pile was one of Vivien Leigh’s dresses from “Gone With the Wind.” He was told they were all going to get tossed. So, he offered the owner $20 to buy it. Tumblin eventually sold the dress at an auction for $137,000.

The Labyrinth’s Hoggle Was in the Unclaimed Baggage Center

Jim Henson’s “The Labyrinth” had a small but prominent gnome named Hoggle, which was a puppet manned by five people. But Hoggle went missing and presumed lost forever. He eventually turned up rotting away in Alabama at an unclaimed baggage center. But the Unclaimed Baggage Museum in Alabama bought him and restored Hoggle into all his glory. Then they finally put him on display.

Captain Kirk’s Chair Was Found in the Trash

Captain Kirk’s command chair from the original “Star Trek” wound up in the trash. But a man from California saw it and took it home and placed it near his personal bar. After he passed away, his wife met George Takei and told him about the chair. So, he got an authenticator to take a look. It turns out it was the real command chair. So, the prop was sold for over $300,000 and now resides in the Seattle Modern Pop Culture Museum.

In 2005, a thief broke into the Judy Garland Museum in Grand Rapids, Minnesota and stole the iconic ruby slippers from “The Wizard of Oz.” Thirteen years later, the Grand Rapids Police Department and the FBI managed to recover them during a sting operation.

The giant plaster sphinx seen in “The Ten Commandments” had been buried under the sand dunes of Guadalupe, California, for over 90 years. The 15-foot-tall sphinx was found by Doug Jenzen, the executive director of the Guadalupe-Nipomo Dunes Center.

While working on the “Goonies,” actor Sean Astin took the One Eyed Willie’s treasure map without permission. He kept it at his mom’s house, but when he went looking for it, it was gone. Then, during the Goonies 30th anniversary screening, he told audiences that his mom probably threw it away.

The Winchester rifle used by John Wayne in the 1962 film, “The Man Who Shot Liberty Valance” and a shotgun from the 1969 film “The Wild Bunch” were stolen from a Southeast Portland video store. But luckily, a man found them wrapped in towels and garbage bags. He also knew who they belonged to, so he returned them to the store.

Thor’s Hammer Was Stolen by Thor

Since taking on the iconic character, Thor, actor Chris Hemsworth has swiped a couple of Thor’s hammers from the sets. But after openly admitting that he was behind the thefts, the film crew have become more vigilant. This has admittedly made it more difficult to swipe anything without getting caught.

Anyone who has seen the “Guardians of the Galaxy” films is familiar with the red leather jacket worn by the character Star-Lord. But the actor who plays him, Chris Pratt, admitted to stealing his alter-ego's jacket for a good cause. He uses them to dress up as Star-Lord and visit sick children at the hospital.

If Bilbo Baggins from “The Lord of the Rings” ever has any trouble getting into his home, then he should ask Gandalf for help. Or in this case, the actor who plays the wizard. Director Peter Jackson knew that the keys to Bilbo’s house had been taken, but he had no idea that Ian McKellen had stolen the keys or Gandalf’s sword.

Ruper Grint played Ron Weasley in the “Happy Potter” movies. But the actor loved the golden dragon egg containing an embedded crystal so much that he snuck it out of the studio in a pillowcase. But when Warner Bros. started searching for it, the actor returned it anonymously.

Katniss’ Jacket from "The Hunger Games" Taken by JLAW

After playing Katniss in four “The Hunger Games” films, Jennifer Lawrence decided to take her character’s leather jacket and leather boots with her. But all they’re doing now is collecting dust while they hang in her closet.

After playing Hermione in eight “Harry Potter” films, actress Emma Watson decided to keep a souvenir to remember the good times she had. So, despite the studio’s policy not to remove props from the set, Watson took Hermione’s time-turner, cloak, and wand.

Although Kathy Bates’ character, Annie Wilkes was a deranged psychopath in “Misery,” it was actor James Caan who broke the rules. In the film, his character rewrite’s Annie’s story using an old typewriter. But when the film wrapped, the actor took the typewriter home.

Green Lantern Ring Stolen and Given Away at Comic-Con

It seems like Ryan Reynolds is a total kleptomaniac. He reportedly stole a “Deadpool” costume. But he also took “Green Lantern’s” ring and then gave it away in 2011 during a contest at the San Diego Comic-Con.