Aggretsuko Most Metal Moments Ever

Jimmy Pember
Aggretsuko Most Metal Moments Ever May 18, 2018 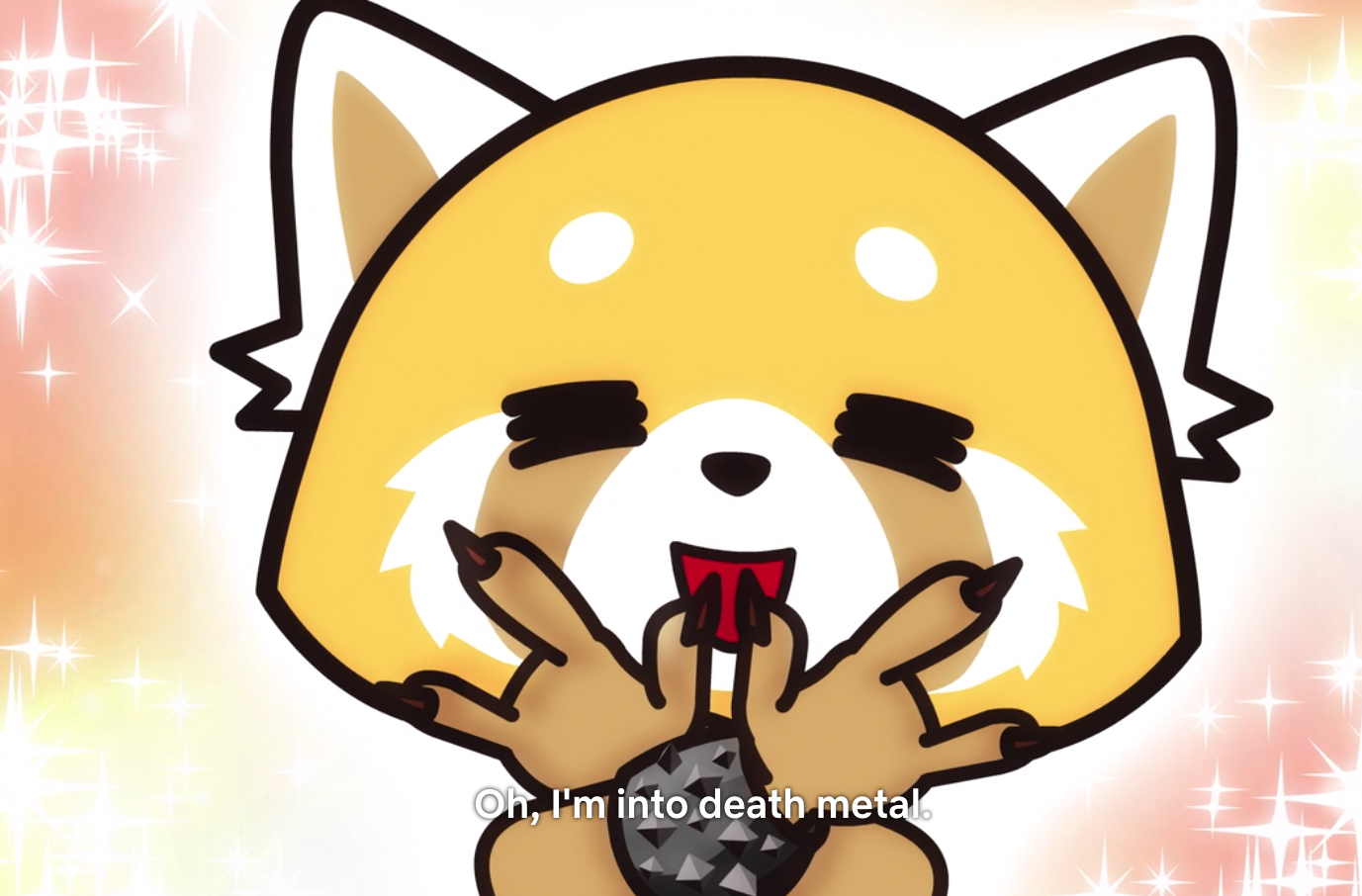 What are the most metal moments in Aggretsuko's first season on Netflix?

On April 20th, a new adorably hardcore anime series came out on Netflix, and we've broken down the most metal moments in Aggretsuko. The title character is a 25-year-old accountant in Japan. But in her spare time, she sings private death metal karaoke to channel her deep inner rage. So it's a fun twist on the cutesy Hello Kitty formula. And as Retsuko deals with her rude boss, her weird friends, and her office crush, you get a real sense of why she needs to blow off steam. The music is killer, and the animation is awesome as well. So raise those metal horns and check out the most metal moments from the first season of Aggretsuko.

Retsuko the red panda is just starting her new job as an accountant. She’s bright-eyed and optimistic about the future, even looking forward to work. But she isn’t expecting what happens next. As she comes to the bottom of a flight of stairs, she twists her ankle. Yeowch! After a moment’s pause, the word “RAGE!” pops up on the screen, and Retsuko goes full metal. It’s an awesome opening to the show.

The boss at Retsuko’s office is named Ton, and he’s literally a chauvinistic pig. He makes Retsuko bring him tea then tells her it’s because she’s a woman. Not only that, but he spends all day practicing his golf swing. And to top it off, he keeps repeating, “I’m so busy! I’m so busy!” with each stroke. Retsuko’s first big number is dedicated to her #1 enemy, and it doesn’t disappoint.

Retsuko works at a Japanese trading firm, and she sometimes feels like the office drudge. When things get especially terrible, her inner rage finds its way out. It’s then that she finds a bathroom stall, takes her microphone out of her purse, and headbangs her way to peace of mind, letting loose about whatever’s currently bugging her. In the first episode of the series, she shrieks about how much her job sucks. Sucks for her, rocks for us.

When Retsuko’s bosses dump a bunch of work on her, she stays late to get it done. And as the night goes on, she gets a little sleepy. Then she takes to the break room to make some tea. But in a sudden fit of rage, she decides instead to hurl the tea kettle across the room. It spirals in slow motion on a collision course for the wall. And though Retsuko is probably the one who cleaned up the mess, it was still a totally metal moment.

On the way home from work, Retsuko stops in at a karaoke joint for a solo session. She heads into a private room, and reveals that she comes here after work pretty often. And then she performs one of her signature songs, a hardcore showstopper about the healing powers of metal.

Eventually, Resuko’s reptilian superior gives her too much extra work to do, causing the lizard lady to freak out on the little panda. And Retsuko’s reaction, from behind a paper mask, is to tell her superior off. After being a pushover for such a long time, the fact that Retsuko is willing to stand up for herself simply shocks her coworkers. No one knows the rage that boils beneath her usually-cool exterior.

In addition to Retsuko’s bosses, there’s one particular coworker who’s just as bad. He’s a monkey who spends all his time sucking up to Director Ton, part office spy and part yes-man. As such, he gets roped into Retsuko’s violent fantasy in which lightning strikes her bosses and the little simian brownnoser. Brutal.

Don’t you hate it when you’re at a store, and the employees just won’t let you browse in peace? They tell you to take your time, but it’s clear they don’t really mean it from the fact that they say it constantly. This very thing happens to Retsuko, fueling her inner fire. She flips out on the clerk to leave her alone in an inspired moment of mad metal magic.

Poor Retsuko feels her life can be pretty dull. She has a couple of office buds, Haina and Fenneko, but she feels she’s missing out because she’s working so much. Her friends are quick to remind her that she’s the responsible one. But she wishes she didn’t have such a plain life, and rocks out about her desire for excitement.

Who hasn’t dreamed of slapping their boss in the face with a letter of resignation? OK, maybe not necessarily in so violent a fashion, but we understand the idea of quitting in style. And for Retsuko, that involves delivering a strongly-worded letter smack to Director Ton’s ugly mug. Now that’s some heavy metal.

Part of growing up is going to a bunch of weddings. And some of those weddings are bound to be between people you don’t know too well. But it seems in Japan that there’s a tradition of giving a set amount of money as a wedding present, depending on your age or position in society. And when it comes time for Retsuko to hand over her hard-earned cash, she doesn’t want to let it go. We know how you feel, Retsuko.

After going off on her superior, Retsuko gets a talking-to from higher up. The conversation leaves her totally compliant, deadest on being a model employee. She even gets little crosses over her eyes due to the fact that she’s suddenly so robotic. Brutal. But soon she remembers how to let loose and rage again.

Longing for escape from her dull accounting job, Retsuko has a vision of achieving sweet matrimonial freedom. That is to say, getting married to someone so rich, she’ll never have to work again. It sounds like a pretty swell set-up, but not a very likely one since she’s not seeing anybody at the moment, let alone somebody rich. Of course, her dream job of working with her friend, Puko, didn’t pan out, so this seems to be the next best option.

Around the office, there are a couple of high-powered professional women, Washimi and Gori, who take an interest in Retsuko. In fact, they even go with her to karaoke one day, and force her to perform some metal. Retsuko finally lets her guard down and reveals her secret self. The business women are blown away, and the cat is at last out of the bag.

Washimi the bird is the assistant to the president of the trading firm. In fact, it seems she’s the brains behind the power, given that the president has a knack for developing dumb, expensive ideas. When he pitches an at-desk office-wide cold wet noodle slide, complete with working model, she takes it upon herself to crush said model beneath her feet. Brutal.

During an interoffice karaoke night, Director Ton comes to the realization that Retsuko recently ratted him out for his insensitive behavior. And he chooses to exact his vengeance behind the mic, spitting hot fire in Retsuko’s general direction. But when she gets up to deliver her death metal rebuttal, the whole office has their collective socks knocked off. It’s a rocking moment indeed.

Following the big karaoke night, Retsuko’s friends Haina the Hyena and Fenneko the Fox are having trouble with their memories. Since they drank so much, they can’t recall what went down, and Retsuko would prefer they forget her death metal secret. Her solution? Karate chop them in the backs of their heads, and stash them in the closet. Not very bright, but deeply metal, for sure.

That Was A Freebie

After dispatching her friends, Retsuko is eventually confronted by her boss, Ton. But in a truly lucky move, it turns out he’s so hung over himself he also doesn’t recall what happened, so Retsuko is temporarily off the hook. It’s the kinda thing so metal it makes us want to scream.

As mentioned, Gori the Gorilla and Washibi the Bird are awesome, stylish fashionistas. Gori is the Director of Marketing at the trading firm. And this is maybe Gori’s most amazing moment, when she suddenly shoots lasers out of her eyes during a karaoke session. What can we say? She’s the full package!

Retsuko finds herself grabbing drinks with some coworkers one day. And who does she sit across from? Her recent office crush, casually nicknamed the Out-of-Pocket Prince (on account of his poor accounting habits). Even though he’s pretty boring, Retsuko manages to drink to the point she thinks he’s interesting, then rushes to the bathroom to throw up. Now that’s what I call “metal.”

After spending more time with her office crush, Retsuko begins to see the world around her as rosy and pink. It’s a side-effect of her believing she’s in love, and while not everyone might agree that love is metal, Retsuko makes us believe it. Her blissed-out faces are hardcore, and her date to the amusement park has unexpected consequences.

As Retsuko and her date walk around the amusement park, her new shoes rub blisters on her heels. But she pretends to ignore the pain, letting her date play the manly man and suggest they walk even further. “I’m not tired,” he says, although it’s clear she wishes he’d just rest for a bit. Blisters on your heels aren’t exactly blisters on your fingers, but they’re still pretty metal in our book.

When Haina the Hyena learns about Retsuko’s new relationship, he gets very jealous of her beau. He even says he wishes he could punch him in the face, although he never follows through on the threat. But he does do some emotional damage to himself, sulking in the rain in his leather jacket until he collapses and goes to the hospital. If love is metal, spurned love is truly heavy.

Kabae the Hippo is one of Retsuko’s coworkers. She spends all her time talking about her kids and her personal life, and loves to pry into people’s business, spreading rumors and gossip. So it’s totally sick when it’s revealed that this annoying side character isn’t in the office anymore because she was accused of international espionage. Like, you’d never have thought she was  capable of it! But expecting the unexpected is what metal’s all about, and spies are definitely rawkin’.

Sure, anybody can do math using a calculator or computer these days. But when Boss Ton breaks out the abacus for some old-school accounting, it’s next-level awesomesauce. There’s something about the way his fingers fly over the instrument that reminds us of shredding a sick solo. Apart from his rap battle with Retsuko, it’s his most metal moment by far.

After all is said and done, Retsuko decides to reveal her secret metal alter-ego to her boyfriend. She takes him to the karaoke booth, and serenades him with her greatest power solo yet. And his reaction, while not exactly over-the-top, is at least accepting of this strange part of her personality. But it seems his appreciation might not be enough for Retsuko, who, despite her shy demeanor, harbors real, raw passion for life. Her most metal moment yet comes from her hard decision to walk away from what she knows can’t make her happy. Brutal!