Here Are The Most Violent Video Games Ever Made, You Depraved Weirdo

Greg Smith
Here Are The Most Violent Video Games Ever Made, You Depraved Weirdo June 18, 2018 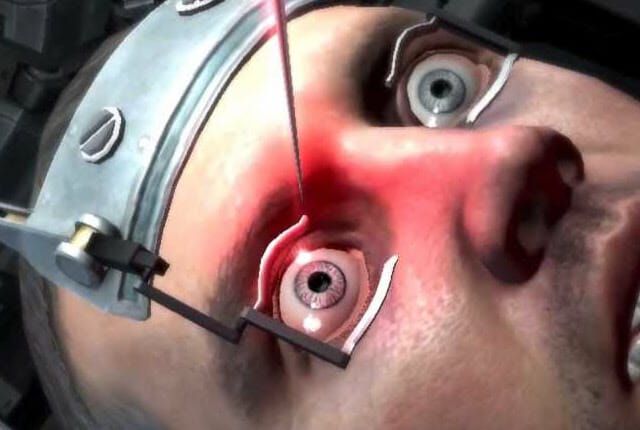 What are the most violent video games of all time?

Ah, video games. Does any other medium kickstart as much moral panic as these interactive distractions? While disbarred attorney Jack Thompson may have his own thoughts, we find the depiction of violence in video games to be fascinating. So in an age where we can Google horrific images on our phones, how do video games still find the power to shock? I've gathered the most violent video games ever programmed, to try to understand. And to satisfy you bloodthirsty weirdos. But fair warning: Mature content, and some light spoilers, run rampant ahead. Player discretion is advised.

In a gaming era of higher-than-high-def graphics, how can a top-down shooter with deliberately retro 8-bit aesthetics be considered one of the most violent games ever? Maybe the woozy disorientation at the center of Hotline Miami, which ranges from the pounding soundtrack to the unreliable narrator, adds to the effect of violence. Or maybe your enemies just splatter a ton of red. Either way, this ain't Will Smith's Miami.

Each entry in the successful God Of War series, including the recent, supposedly "gentler" franchise restarter, features a shocking level of visceral brutality not felt in other violent games. Is it the emotional rage we feel in Kratos? The wild death animations that often shift to a first-person perspective of the victim? Or just the sheer quantity of punches thrown per head?

When the Ninja Gaiden franchise was rebooted for modern consoles, it wasn't just character design and combat systems that got an overhaul. Designers decided to throw gallons of arterial spray into the mix. Now, when Ryu stabs and slashes his enemies, we really feel it. The second rebooted entry added a, um, "delightful" system of dismemberments and decapitations into the mix.

If you're looking at this picture of this dude with a needle near his eye, and you're thinking, "Dang, a sharp needle in the eye, ouch," I've got news for you. What happens to this guy is much, much worse than you could ever think. While its predecessor was no slouch in the violence department, Dead Space 2 takes the series' visceral grotesqueries to a whole new galaxy.

Is Shinji Mikami okay? He's the mastermind behind horror video game masterpiece Resident Evil, and when he introduced the world to his latest work, he upped the surreal, upsetting levels of violence, too. The Evil Within gets under your skin by rooting its extreme gore in psychological horrors. Oh, and by sometimes literally getting under characters' skin.

You just chainsaw the back, Jack. Or curb stomp on the head, Fred. Knife 'em straight in the neck, Beck. Or even use your damn shield... uh... is "Yield" a man's name? Anyway, in Gears Of War 4, you can execute your enemies in lots of gruesome, graphic ways.

In the golden age of FMV adventure games, where they filmed real actors on cheap green screens for your gaming entertainment, Phantasmagoria stands above the rest. Most of these games suffer because of their low budget. Phantasmagoria thrives because it borrows the practical gore effects from low budget horror films. The result is truly stomach-churning.

First person shooters are inherently violent. How can you make your title stand above the rest? For Bulletstorm, the solution was to add in a kind of energy weapon that could freeze people, allowing your character to do, well, whatever horrible things they wanted. A remaster, titled Bulletstorm: Full Clip Edition, renders these violent acts in full 4K splendor.

Ah, the Nintendo Wii. Home of Mario, Donkey Kong, and Zelda. Home of family-friendly motion controls. Home of... an ultraviolent, post-apocalyptic cult classic where macho dudes explode each other with chainsaws, splattering blood everywhere?! MadWorld garnered a lot of controversy upon release for this clash of context. Even though the game is rendered in black and white (except for the red blood), it packs a potent punch.

Context is everything. For most of Call Of Duty: Modern Warfare 2, you mow down bad guys with guns before they mow you down. Standard FPS stuff. Then, the infamous "No Russian" level happens, in which you are tasked with massacring civilians in an airport. Suddenly, the violence feels realer, scarier, and more potent. It's a surprising act of political muckraking in a normally safe franchise.

As a player of Postal 2, your goal is to, well, go postal. Even more than titles like Grand Theft Auto, the world is your misanthropic, ugly playground, and you can mess with it as you please. Postal 2 is ugly in its politics, its graphics, its gameplay, and its rendering of human beings as useless meat puppets to slaughter.

Typically, the Entertainment Software Rating Board, or ESRB, saves its harshest rating, Adults Only, for games with graphic sexual content. Then a little game called The Punisher game along. Its vicious depictions of vigilante violence garnered an AO rating. The publishers retaliated by obscuring the most offending acts with a shaky, black and white filter, and bizarre camera moves. Now, Jon Bernthal blasts people away on Netflix on the regular with no blowback, so times have clearly changed.

In its shift to first-person gameplay, the Resident Evil series didn't pull any punches. Biohazard, its seventh entry, puts upsetting imagery right in your face, with no third-person perspective to distance yourself from its horrors. The game borrows found-footage aesthetics, and in our opinion, does the genre better than many contemporary movies.

Winning the award for "Most Disturbingly Violent Over A Multiple-Year Franchise," Splatterhouse began life as a controversial 1989 arcade game, where you played as a vicious killer. Then, in 2010, it got the "gritty console reboot" treatment, upping its over-the-top depictions of gore and brutality. One of these days, hockey masks will be seen as just "protective hockey wear".

One of the OGs of controversial video game violence, Doom follows a silent marine as he graphically blasts his way through all matters of gross and grimy demons from Hell. The monsters you battle explode in visceral pockets of flesh, sure. But we found the depiction of the main character, whose bloodied and battered face is nestled at the bottom of the screen, to be the most disturbing facet of all.

Riana Rouge, another FMV adventure game, earns its Adults Only badge and wears it proudly. It's an exploitative, provocative title, mixing sex and violence in ways that are equal parts grimy and intriguing. It's about a woman fighting her way to independence and power, which is technically inspiring. But does the title earn its viciously loaded acts of terror toward the title character?

Don't let the innocent arcade game look fool you. Chiller is an intense, borderline sadistic game. You're not pointing your gun at zombies, monsters, or anyone trying to kill you. You're literally shooting the skin off of prisoners in a dungeon, until they're pained husks of bloody flesh, muscles, and bones. This game is wild.

Was "first-person shooters aren't violent enough" a thought anyone was having? Soldier Of Fortune addresses this non-existent concern with aggressive hyperviolence. Each body part is shoot-offable, from the head to the feet. The game also goes out of its way to show you the sprayed intestines and bones of your victims. Is it a commentary on the "out of sight, out of mind" mentality we often adopt regarding the military? Or is it just an attempt to be edgy?

A game so controversial it wasn't even released. Thrill Kill, a 3D-fighting game developed for the original Playstation, combined the hardcore violence of a Mortal Kombat with the icky sexual politics of "sadomasochism as understood by someone with the emotional maturity of a 13-year-old boy". The game was ultimately cancelled, but bootlegs exist in abundance.

Test your might. But also, test your stomach. The latest and greatest entry in the long-running "super duper mega violent fighting game" series, Mortal Kombat X (XL if you're nasty), finds a way to up the ante in its destruction of the human form. X-ray moves give us close-up renderings of broken bones. Body parts and skin are severed and flayed. Insides become "outsides". Play the game enough, you'll be telling your barf bag to "get over here".

Just thinking about this stupid game makes us feel ill. Hatred is a black and white third-person shooter about a nameless guy who decides he hates the world and everyone in it. His solution? To viciously slaughter everyone in his path. Men, women, children. It's dumb, ugly, useless, sexist, racist, and just bad. We don't even want to link to the trailer, but if you must seek it out, don't say we didn't warn you.

When it comes to violent Wii games, Manhunt 2 makes MadWorld look like Captain Toad: Treasure Tracker. It's the story of a poor guy who is forced to make snuff films, viciously and inventively slaughtering people for the benefit of a kidnapper (and, dare we say, us?!). Its violence garnered the title an Adults Only rating, like The Punisher. Similarly, Rockstar Games obscured many of its worst death sequences. However, you can still buy the uncut game for PC.

It's a game in which the levels are made out of mutilated genitals. And those are just the levels. Agony, a first-person horror game, is a full-on descent into the bowels of Hell. Like Bane, it was born in the shadows, and like Bane, it's hard to understand what all the viscera means. Still, it's hard to deny the raw power of its horrifying visuals and discordant sound design. The ESRB slapped it with an AO rating, forcing Agony's makers to censor parts... though they may still offer the original content in a patch.