Movies You Had No Idea Are Based On Insane True Stories

Camila Villafane
Movies You Had No Idea Are Based On Insane True Stories January 24, 2018 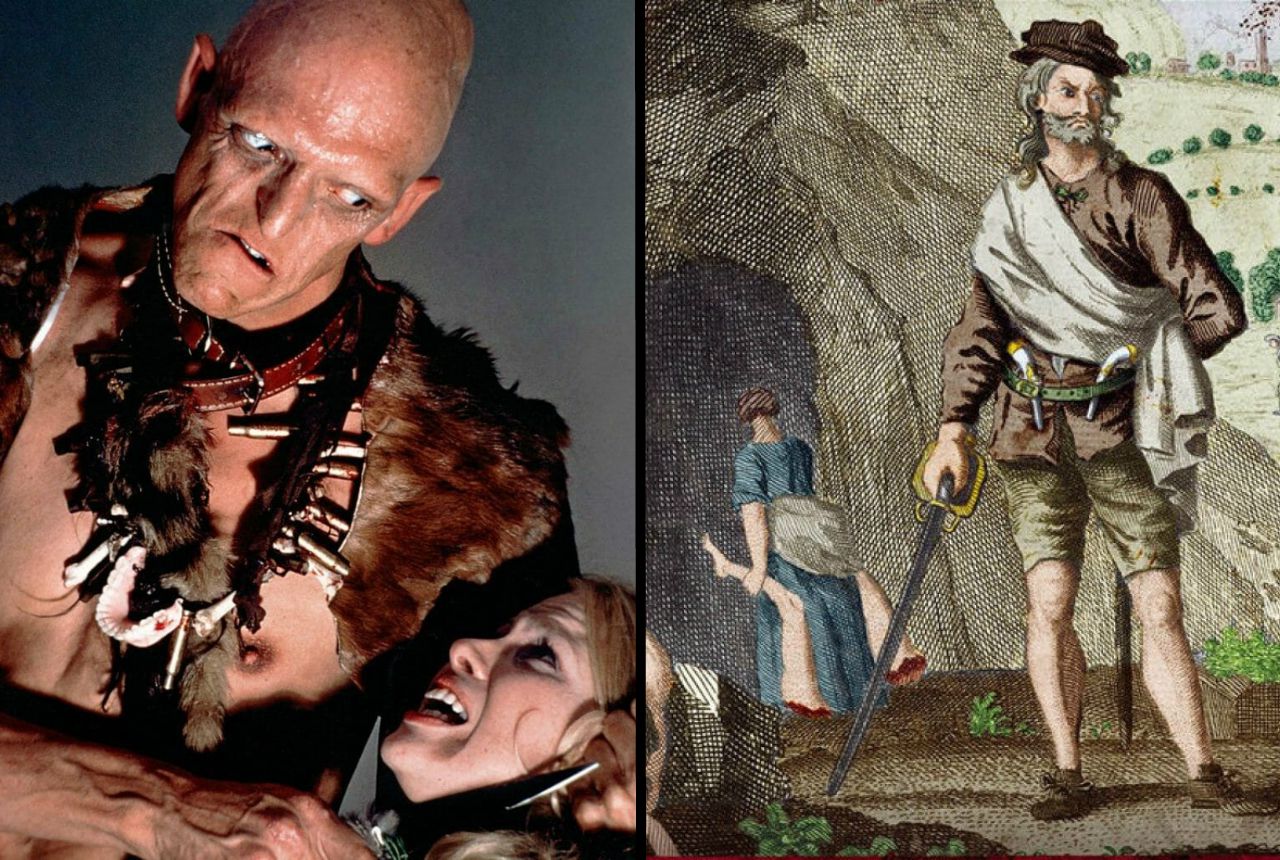 Not all of the films that we know and love in Hollywood come from someone's imagination. In fact, there are quite a few movies that come from absolutely true stories. You probably just assumed that it looked like an awesome flick, and didn't twice about it. But these films found their inspiration in some insane real life events that prove truth is stranger than fiction.

The Hills Have Eyes

A family's car breaks down in an area inhabited by deformed savages, who are also cannibals. They attack the family and turn them into lunch. In real life, Scotsman Alexander Bean led 40 men, who lived in caves, and ate over a thousand people in the 15th century.

Of all the movies that are based on true stories, you're probably familiar with this one. Norman Bates kept his dead mother's corpse, and assumed her identity. In real life, murderer Ed Gein from Wisconsin was arrested in 1957 for digging up women's corpses who reminded him of his dead mother.

Drew Barrymore plays a woman who forgets everything she did the day before, hence why she deals with the pain of dating Adam Sandler. In real life, a woman named Michelle Philpot has had the same problem for the last 20 years and uses Post-It notes to remember things.

In the horror flick, Mick terrorizes, tortures, and kills tourists visiting Australia. But in real life, an Aussie named Bradley John Murdoch killed a British tourist, and Ivan Milat took hitchhikers into the forest and killed them in the 90s. Both killers inspired the film.

Actress Linda Blair played Regan, a young girl possessed by a demon. But it's based on a true story from 1949, where a 13-year-old boy was allegedly possessed by a demon in Maryland. But of course, Young Regan's split pea soup vomit scene was a lot scarier.

Before actor Roy Schneider had to deal with a great white, folks in Jersey had a shark problem of their own. In 1916, five people were attacked in the summer, and sadly four of them died. All evidence suggested they were unwilling guests of a great white.

Charlize Theron played real life Florida serial killer Aileen Wuornos, who murdered seven men, whom she claimed raped her. But having been convicted of the killings, she was sentenced to death, and in 2002, she died of lethal injection.

Daniel and Susan get separated during a group scuba-diving expedition and have to deal with hungry sharks while stranded in the water. In real life, Tom and Eileen Longergran were stranded in Australia's Great Barrier Reef in 1998 after being left to fend for themselves.

The appearance of the Mothman coincided with a bridge collapsing in Point Pleasant, Virginia. But ironically, in 1966, a winged creature known as the Mothman was sighted. In 1967, the Silver Bridge collapsed, killing 46 townspeople.

In the flick, characters escaped death only to find that death was after them. In real life, broadcaster Jessica Ghawi had a feeling at the Eaton Center in Toronto and left before a massive shooting took place. But sadly, a month later, she was shot to death at the "Dark Knight Rises" premiere.

This home invasion movie about a bunch of strangers in masks terrorizing couples at a house is based on three true stories. One of them focuses on the horor that Bryan Bertino suffered as a kid, which is also related to the Keddie Cabin murders, and the infamous Manson family murders as well.

Hilary Swank played a female to male transgender named Brandon, who travels to a town, falls in love, and is happy until her secret is discovered. The film is based on Brandon Teena, a trans male who went to Nebraska and was raped and killed by a bunch of homophobic a**holes.

A large croc named Gustave by the Burundi people in Africa, feasts on the locals, so a veteran reporter goes there to investigate the claims. But what's true is that a 20 ft. croc did live in Burundi and ate 300 people in its lifetime. But he always managed to get away.

In the film, Leatherface and his crazy family sat around trying to figure out who to kill next. Once again, real life killer, Ed Gein influenced this horror flick, mainly due to the fact that Gein loved skinning his victims, using their body parts to make furniture and possible masks.

Not Without My Daughter

There are movies that are based on true stories, but loosely; this one was accurate as hell. It follows Betty Mahmoody who is tricked by her husband to go to Iran with their daughter Mahtob. But then he forces her to stay, and she tries to flee Iran with her daughter.

The Exorcism of Emily Rose

There's a lot more truth to "The Exorcism of Emily Rose" than you might think. It's actually based on Anneliese Michel, a girl from Germany, who heard voices, spoke in tongues, and had an aversive reaction to crucifixes.She underwent an exorcism that resulted in her death in 1976.

Actor Robert Caryle played wounded frontiersman, F.W. Colghoun who starts eating soldiers. The film was inspired by Alfred Packer, aka the Big Headed Cannibal. Packer was found guilty of cannibalism in 1874 and sentenced to 40 years in jail.

In the 2007 film, "Stuck," an intoxicated Brandi hits Tom with her car, drives home, and leaves the injured man in her garage. Same thing happened when Chante Jawan Mallard hit Gregory Glen Biggs in 2001 and left him stuck on her windshield and trapped in her garage. She got 50 years in prison.

The directors of the film, which showed Lucas and Clementine attacked in a remote home by a gang, is based on the real life story of an Austrian couple who were staying in a holiday home in Romania when three teens attacked them for no reason and murdered them.

The Town That Dreaded Sundown

The 1976 film, "The Town That Dreaded Sundown" was based on a series of murders in the 40s in the town of Texarkana. In ten short weeks, a killer murdered 8 people, but authorities never found the guy, which is why he was called the "Phantom Killer".

The scene in Cabin Fever where Marcy is shaving her legs and suddenly realizes she's shaving her flesh too is bone chilling. But for movie director, Eli Roth, this was based on an infection he caught in Iceland. As he shaved his face, he got the same gory results as Marcy. Ouch.

Single mom, Carla, gets sexually assaulted by an invisible force, which is what happened to Doris Bither in 1974. Paranormal investigators claimed they saw something otherworldly and even took photos of floating lights, but sadly, no selfies with the rapist poltergeist.

In the film, a couple move into their home in Amityville, New York. But something supernatural haunts them and turns a family member into a killer. In real life, George and Kathy Lutz moved into a home in Amityville which they claimed was full of evil of demonic energy and even slime on the walls.