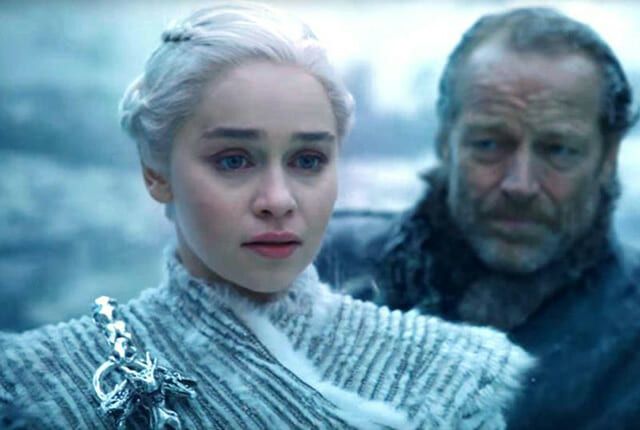 SPOILERS (specifically Game of Thrones) ahead! You've been warned... We don't bat an eye when scores of soldiers die in battle scenes, but if a horse, wolf, or dragon is killed we all lose our collective sh*t. Here is a look at some of the most devastating animals deaths from tv and film.

One of Daenerys Targaryn’s three dragons, Viserion was the latest loss on ‘Game of Thrones’. We aren’t if there is anyone who didn’t thoroughly enjoy watching three dragons fly around the skies of the far North torching wights and saving Jon Snow and Co. But then the Night King had to go and ruin everything by hurling an ice javelin through our beloved Viserion. And to make matters worse, the Night King has reanimated the dead golden dragon to serve in his army of the dead.

In the midst of an exhilarating scene of Harry Potter and Co. fleeing Voldemort and his Death Eaters, Harry loses one of his first friends, Hedwig. Dodging flying curses en route to safety a flash of green light send Hedwig plunging to her death. It happened so quickly with so much else going on it almost doesn’t register at first. Once it sank in, we were left stunned by the loss. RIP Hedwig.

The first gut-wrenching death of the Stark’s direwolves was Sansa’s Lady. Apart from the fact that she was being killed for no reason, honorable Eddard Stark was the one who carried out the execution. We still haven’t fully recovered.

Nothing can quite prepare you for a death like this. Atreyu and Artax are making their way through the Swamp of Sadness (Talk about foreshadowing) when they become stuck in the mud. Atreyu is able to make it out but Artax is overcome and dies in the swamp. We’re not crying, you’re crying!

Sam (I Am Legend)

So, you’re the last man on the planet full of mutated humanoid monsters but at least you have your faithful pup. Right? WRONG! Sam gets infected while trying to protect Robert from zombie dogs. Without a cure for the virus, audiences have to watch Robert put his only friend down when she starts to show signs on infection. Time to go cry ourselves to sleep now.

This is the saddest scene in all of ‘Futurama’. Period. Watching Seymour wait for literally the rest of his life for Fry to come back to the pizzeria is absolutely devastating. Just writing this is bringing back the trauma.

Old Dan and Little Ann (Where The Red Fern Grows)

It was hard enough seeing Old Dan succumb to his wounds from protection Billy from a mountain lion. But then having Little Ann die shortly after from heart break after the loss of her best friend, that was too much. That’s too much sadness for one film, we tell ya!

Killed by wights protecting Bran and Meera, Summer’s death was unexpected and happened so quickly it was almost too hard to process. Anytime a dire wolf dies on ‘Game of Thrones’ is tragic and this one was no exception.

This one is a double-whammy. When Snowball II is hit by a car and killed, Lisa is devastated. And is that is hard enough to watch the Simpsons bury their beloved pet, we see Snowball II buried next to Snowball I, who was also killed by a car. Tragic.

Brave Old Yeller defends his family from a rabid wolf like a good dog should. Unfortunately he contracts rabies in the process. While Travis is weeping when pulling the trigger on his faithful pet, the audience is completely balling along with him. It’s heart breaking.

Maybe one of the saddest moments in film history, seeing Mufasa being trampled to death by a herd of wildebeests was horrific. Then having to watch young Simba coming to grips with the fact that his father was dead was almost too much to handle. Someone pass us the box of tissue, please.

If the brutality of the Red Wedding wasn’t enough for audiences the fact that we had to watch Grey Wind murdered with crossbow bolts as he was helplessly penned up was just the rotten cherry on top of a sh*t cake. Just heart-breaking, again!

Bambi and his mother are just out looking for food to survive the winter when out of no where a hunter up and kills Bambi’s mom leaving him all alone in the forest. Cue the waterworks.

When you go to see a movie about a dog’s impact on a family’s life, it shouldn’t be too much of a shock when the dog dies in the end. But that doesn’t lessen the blow. When Marley has to be put down it’s a punch in the gut.

Littlefoot’s Mom (The Land Before Time)

Being injured protecting Littlefoot and Cera from Sharptooth wasn’t enough to claim Littlefoot’s mother, but the subsequent earthquake was just too much. Leaving the young dinosaurs to fend for themselves on the way to the Great Valley, the death of LIttlefoot’s mom was almost too much to bear.

Charlie (All Dogs Go To Heaven)

You had to see this one coming with a title like that, but it still doesn’t lessen the blow. In fact, the main character, Charlie, dies not once, but twice in this movie! The first death isn’t too traumatic but the second is tough, especially when you consider the fact that Charlie dies with the understanding he is going straight to doggy hell, which he does. How was this a kid’s movie!? (P.S. Charlie eventually gets to go back to Heaven.)

John Wick has already lost his wife to cancer and his pup, Daisy, was a daily reminder of her and the love they shared. So when Wick’s dog is killed by some thugs during a home invasion, that was the tipping point. John Wick then goes on a vengeful and murderous rampage to get retribution for his lost dog.

When the Griffin’s long time pet, Brian, is hit by a drunk driver audiences had to endure a painful and devastatingly sad scene. The Griffins all gather around a fading Brian to say tearful goodbyes is almost too much.

In buddy cop movies, when one partner takes a bullet for the other, it’s always sad. But when the partner who takes the bullet is a canine, it’s 10x worse! Not a dry eye in the house for that scene.

Nanta (Return of the Jedi)

There is plenty of death happening in the ’Star Wars’ movies but this one really stands out to us. In ‘Return of the Jedi’ during the Battle of Endor we see two ewoks tumble to the ground after a laser blast explodes, one of the ewoks pulls himself up and tries to rouse his companion only to find him dead. This small sequence has no major effect on the story as a whole but seeing an ewok mourn the loss of a friend hits us right in the feels.

Antie (Honey, I Shrunk the Kids)

Who ever thought they would be sad seeing an ant die? Well if you’ve ever seen ‘Honey, I Shrunk the Kids’ and have a soul, there is at least one moment where that is the case. Antie saves the day when he fights off a scorpion but suffers a mortal and venomous wound in doing so. RIP Antie, may you get all of the oatmeal cream pies you can eat in ant-heaven.

When you watch a children’s movie about a spider that befriends a lonely pig on a farm, you would assume to watch a heartwarming movie about friendship. And ‘Charlotte’s Web’ is that film, until the end when Charlotte dies! Not only does that leave Wilbur alone, but orphans her little spider babies! What kind of movie is this?!