WTF Facts About “Sonic the Hedgehog” You Never Knew Before

Jen Arbues
WTF Facts About “Sonic the Hedgehog” You Never Knew Before January 9, 2018 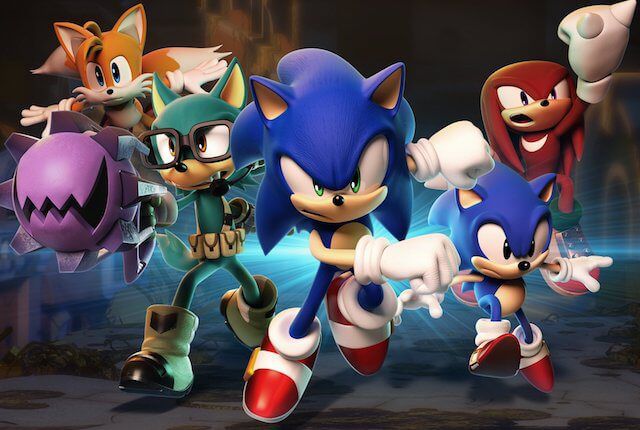 In 1991, times were simpler. Gas was $1.12 a gallon. A new home would set you back only $120,000. And gamers fell in love with an anthropomorphic blue hedgehog in sweet sneakers who could run fast. Really fast. When Sega released the side-scrolling platform game Sonic the Hedgehog, it wasn’t expecting it the level of success the game achieved. Who could have guessed that a running hedgehog and his fast friends would revolutionize the gaming industry? But this franchise is full of surprises. So here are some fun Sonic the Hedgehog facts you never knew.

Meet Alex Kidd, the OG mascot for Sega throughout the ‘80s. He was a white kid who also kinda looked like a monkey, and his biggest hit was called “Alex Kidd in Miracle World.” So when Sega decided they needed a character to compete with Nintendo’s Mario, it’s obvious to see why he was dumped.

Sonic was originally a rabbit

The “Sonic” series could have looked a lot different, had it not been for the difficulty in working with a big-eared design. Keep in mind kids, this was 1991. Peak technology was a fast moving animal in a basic round shape. Bunny ears? Years down the line.

His name was almost “Mr. Needlemouse”

His look is a mashup of some other famous characters

So like, if Felix the Cat had a baby with Mickey Mouse (assuming it was biologically feasible, of course) and then had Michael Jackson dress it, the baby would be Sonic the Hedgehog. Because well-dressed hedgehogs come from cat and mouse breeding. They teach this in 3rd grade science class.

And his attitude is definitely a little presidential

Apparently, Sonic’s attitude was inspired by former president Bill Clinton, although we’re not entirely sure how. Has Sonic only ever tried pot once but never inhaled? Does Sonic have a penchant for ladies in blue dresses? He does seem to be partial to the color, you know.

He has an extensive backstory

Which includes a turn as leader of an animal rock band, his skills as a breakdancer, and his romance with a human lady named Madonna. Sonic couldn’t have been more ‘80s if the decade threw up on him. And honestly, now we wish they would have worked more of this into the actual gameplay.

The original game’s soundtrack should be sold in stores

Japanese pop group Dreams Come True composed the soundtrack for “Sonic the Hedgehog,” which may not sound like such a big deal in the U.S., but in Japan, they are a pretty big deal. And if you’ve ever seen “Sleepless in Seattle” or “The Swan Princess,” you’ve definitely heard their work.

But “Sonic the Hedgehog 3” has some downright Grammy-worthy work

Of course, throw a name like Michael Jackson out there, and suddenly everyone knows who you’re talking about. Too bad for Sonic, but the King of Pop didn’t think the end result was as good as his name, so he took it off the project completely. Good thing the internet never forgets.

Sonic’s arch-nemesis has something of an identity crisis

Just like your family at this year’s holiday get together, Sega’s U.S. and Japanese headquarters could not see eye to eye on Dr. Ivo “Eggman” Robotnik’s name. The solution? Just combine everyone’s ideas into one, including calling out a sister’s Croatian boyfriend. As families do.

The egg-like shape of Dr. Robotnik made him such a popular character with developers that they wanted to give him a main role. But because you can’t compete with Sonic the Hedgehog, Robotnik was relegated to villain duty. We’d totally be down for a Robotnik series, though.

We’re not totally sure here, but it does seem pretty fitting, what with Sonic hanging out in California already. That isn’t to say Japan had to wait ages for the game, either. Just, you know, 30 days. Of sweet, sweet American gameplay.

He beat out Mario, Luigi, and Princess Peach. You know why? He just got there faster. Ooh, speed jokes.

During Sonic’s design phase, Yuji Naka, one of the three men credited with making him, assumed that real-life hedgehogs couldn’t swim, so he just sort of went with it. Turns out they can swim, so all those times we had to watch Sonic fall into the water and drown were just dirty, dirty lies.

Man, Michael Jackson does not get enough credit. Those “power sneakers” that were designed after his own famous footwear? It’s actually those that give Sonic his speed. What we’re taking away from this is that if we want sweet moves and sick speed, we’ve got to get our hands on a pair of Jacksons.

There was an 8-bit version of the original game

Probably because not everyone could afford the Sega Genesis (some of us gotta eat), Sega released an 8-bit version of the game for the Master System and Game Gear. Fewer rings, sure, but there’s no denying Sonic looks good in pixels.

There was definitely drama behind the scenes

When your boss doesn’t want to give you credit for your work, you can bet it’ll cause bad blood. That’s what happened with Yuji Naka and Sega Japan, which we can only hope ended in an epic, “Office Space”-esque exit on Naka’s part. Or, you know, his transfer to the states.

…Which probably led to Naka creating a hidden message

But he did manage to get his credit for the game, even if he had to hide it in the introduction screen. You need a cheat code to view the names behind “Sonic,” but it isn’t like you haven’t already been using those in every other game you play. We know you didn’t earn that loot box, Jimmy.

But it isn’t as cool as the hidden message in “Sonic CD.”

"Infinitely fun. Sega Enterprises. —Majin.” Not so weird, right? Not until you realize that “Majin” is the Japanese word for “devil.” So have fun playing your “Sonic” games in Hell with Satan.

Take too long to make a decision, and Sonic just suicide jumps off a cliff. It’s a totally reasonable reaction towards something like say, forgetting to pause the game to use the bathroom, or whatever. We’ve all been there. We’ve all wanted to free fall into the ocean.

The Guinness World Record for highest score belongs to this guy

Michael Sroka from Detroit, MI scored 812,140 points on “Sonic the Hedgehog” in 2011 and still holds the record today. And if you think you could beat him, you’re probably wrong. There isn’t enough Mountain Dew and Doritos in the world to fuel that kind of win.

Does anyone know Jaleel White outside of his famous “Family Matters” catchphrase? No. No, they don’t. So would you really want to watch a “Sonic the Hedgehog” series whose main character makes you want to ask, “Did I do that?” No. No, you wouldn’t.