These Male Superheroes Have The Raunchiest Costumes You’ll Ever See

Jen Arbues
These Male Superheroes Have The Raunchiest Costumes You’ll Ever See October 3, 2017 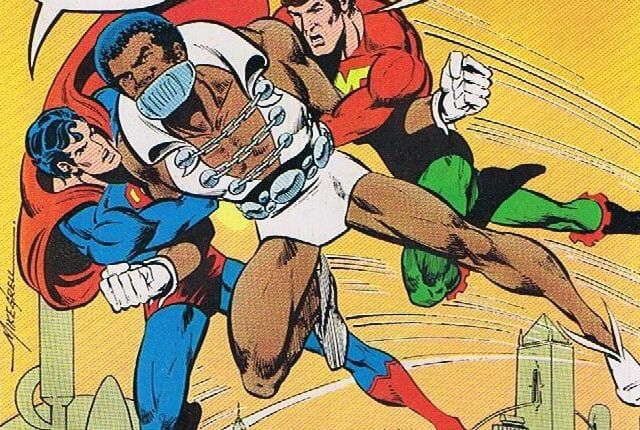 Comics are notorious for over-sexualizing female superheroes. We always see the baddest women in the tiniest costumes. But it would be unjust to forget the men of the comics world. Objectification goes both ways, you see. And comics have plenty of ass-kicking boys with little in their wardrobes other than Speedos and capes. So we’ve rounded up the most revealing male superhero costumes in comics. Because equality.

In all honesty, Robin’s costume is pretty tame, at least when we compare it to the others on this list. What’s weird about it, though, is the fact that Robin – or Dick Grayson, when he became Robin – is a child. The least they could have done is given him some damn tights.

Hawkeye’s costume isn’t normally so risque, but there was that one time he used Hank Pym’s size-changing gas to become Goliath, and somehow in the process he lost half his clothing. And this, friends, is the Hawkeye we're here for.

OK, so Cosmic Boy didn’t wear a belted black monokini (or is it a corset?) for long, but, boy, do we cherish those few years when he did.

Colossus’ costume is like a poorly designed muscle-shirt bodysuit with a bedazzled belt. How does he get into this thing? How does he even go to the bathroom?

Do you think Hellboy has his shorts specially tailored to allow for his tail, or is that something he does himself? Does he know that they make shirts in big and tall sizes? Is he aware that his trench coat isn’t keeping anything hidden, or fooling anyone?

Aquaman has had some pretty great costumes throughout the years (orange fish scale spandex forever!), but we’re big fans of the one-handed, rugged badass Aquaman of the ‘90s. So, too, is Zack Snyder, apparently, because this is clearly what Jason Momoa's version of Aquaman is based on.

Oh, did you not realize Hawkman’s costume was supposed to be the literal interpretation of a bird? What else should a mythical Egyptian alien god-man wear day to day?

If the Olympian really wanted to be true to history, he wouldn’t be wearing anything at all. But we can’t have superheroes flying around buck naked (or can we?), so the military kilt and shin guards – and nothing else – will have to do.

Bruce Banner probably spent a long time trying to find the perfect cotton/poly blend T-shirt and jeans, only to have the whole ensemble ruined by his psychotic alter-ego whenever things don’t happen to go his way. Really, the lack of clothing available to giant green monsters isn’t his fault at all.

Hercules is like the Marvel version of DC's Olympian, only with a much smaller costume. And by "smaller," we mean it barely covers anything. It’s basically like an S&M harness, but green. Oh, and he has a pretty cool helmet too, even if it kind of clashes with the rest of the outfit.

If you’ve seen the 1974 Sean Connery film “Zardoz,” then chances are, you’re already familiar with Vartox’s costume. Because he’s a total ripoff of the movie character. Fun fact: Vartox hails from the “Sombrero Hat” Galaxy, which is something we definitely couldn't have made up even if we wanted to.

As if you couldn’t tell just by looking at him, Tyroc is a true product of 1970s comics creation. The white leotard. The giant collar. The Peter Pan booties. All that’s missing here is an extended single-take dance scene set to the Bee Gees.

J'onn J’onzz has the ability to shapeshift into anything or anyone he wants to, so it’s understandable that wardrobe might be the last thing on his mind. Still, just throwing a cape over a belted speedo and X-suspenders is a little lazy, even if he’s using Superman as his color-palette inspiration.

The Spectre may be one of the most powerful superheroes in the entire DC universe, but come on. His costume is literally a cape with a pointy hood and a pair of high-rise underwear. The guy couldn’t even spring for a decent set of nipples.

If you were to take the Spectre’s costume and run it through a wood chipper, you’d come close to what the Creeper wears on the daily. Because nothing says insanity quite like shredded Christmas wear.

You know what really offsets a chain, jewels and feather ensemble? Fur. And the Warlord has it in spades. T-Pain would be so proud.

At least Namor’s costume makes sense for his surroundings. While his character has seen a number of outfit changes over the years, nothing will ever be quite as amazing as this green fish-scale Speedo and gold belt combo. Aquaman who?

Yellow cheetah print, a luchador-style mind-control mask and a candy-cane-striped loincloth are all one really needs to unite the entire animal kingdom into an unstoppable force. Or so B’wana Beast would have us believe.

Is he even wearing a costume? Is he? We think Marvel is just using his silver skin as an excuse to dismiss costume design altogether.

Well, if you’ve seen Zack Snyder’s “Watchmen,” it’s pretty safe to say that you’ve definitely seen Dr. Manhattan. All of Dr. Manhattan. And, no, that blue glow does not count as a costume.