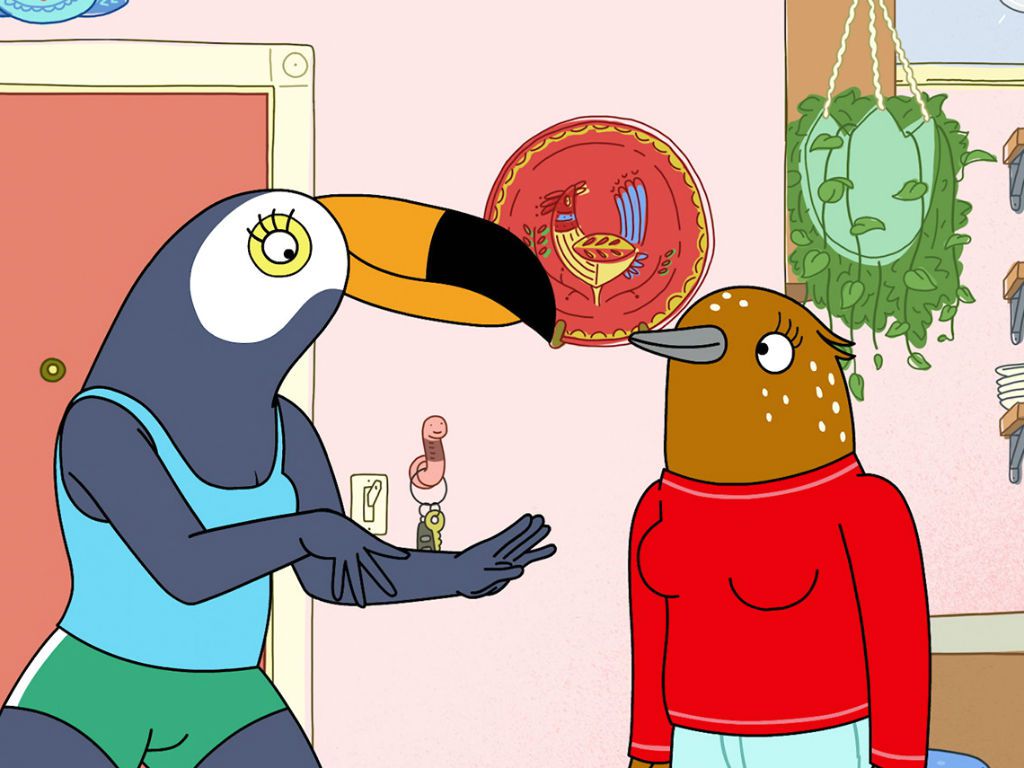 Just because a TV show is good doesn't mean it will stick around. Some of the best series of all time went widely unseen and quickly canceled. Meanwhile, certain mediocre shows last for 10 or more seasons. Life isn't fair. Here are the best TV series shamefully canceled after a single season...

In an attempt to capitalize on the runaway success of Kevin Smith's movie "Clerks", an animated series was made. Though it had hit talent like "Seinfeld" writer David Manfeld and character designer Stephen Silver (who designed the characters in "Kim Possible"), talent doesn't translate to ratings. The show aired on ABC and didn't fit with the rest of its original programming, and struggled to find an audience. With low viewership, it was canceled.

The premise of 'Clone High' is that a number of famous people have been cloned and now all attend high school together. It featured JFK, Cleopatra, Gandhi, Joan of Arc, and Abraham Lincoln, all going through their awkward teenage years. Series creators Phil Lord and Christopher Miller are responsible for such hits as "The Lego Movie", "Cloudy with a Chance of Meatballs" and "21 Jump Street". Though it was a hit with fans, viewers in India were upset over the depiction of Gandhi and mounted a hunger strike, prompting its cancellation.

Created for Amazon, "Crisis in Six Scenes" was created by famed director Woody Allen and starred Miley Cyrus. Set in the 60s, it followed a middle class suburban family whose daughter is wanted by the FBI. Allen's transition to the small screen had some rocky moments, but some of its best bits are classic Allen. Unfortunately, neither the show nor Allen were given the chance to find their footing.

Based on the novel by Chris Kraus, "I Love Dick" starred Kevin Bacon and Jill Soloway. Soloway played a married filmmaker who became infatuated with Bacon, an artist and teacher. The show was sharp and funny and was met with critical acclaim. It was lauded for its boundary-pushing depiction of a woman's sexual desires. Unfortunately, some speculated the show's feminist slant created an audience that was too niche, and was canceled to make room for shows with broader appeal.

Joss Whedon is known for creating cult classics, and "Firefly" was no exception. After the success of "Buffy the Vampire Slayer" and "Angel", Whedon created "Firefly". To this day, this space western is much-beloved. After its cancellation, Whedon created the film "Serenity", which followed the events of the final episode. Together, they have spawned a franchise that includes comics and graphic novels

'Studio 60 on the Sunset Strip'

"Studio 60 on the Sunset Strip" was hit showrunner Aaron Sorkin's followup to "The West Wing". Between the show's stellar cast and Sorkin's famed wit, the show had a solid foundation. It followed the behind-the-scenes creation of a sketch-style show, similar to "Saturday Night Live". Unfortunately, it premiered in the same season as Tina Fey's "30 Rock". Fey's show had the same premise, and although hers was a comedy and Sorkin's show a drama, comparisons abounded. Though "Studio 60 on the Sunset Strip" was a compelling watch, it couldn't escape the shadow of the massive hit "30 Rock."

Airing in 1994, "My So-Called Life" tackled many issues for teens in a way that hadn't been done before. Rather than being soapy or preachy, it had a real-world approach to topics like homophobia, sex, and drug use. The show is critically acclaimed and is one of TIME Magazine's All-TIME 100 TV Shows. Though fans rallied to keep the show on the air after its cancellation, it wasn't enough, and the show never saw a second season.

Created by Ezra Koenig from the band Vampire Weekend and voiced by Jaden Smith, "Neo Yokio" is an American-Japanese show that is delightful in its weirdness. It's set in an alternate timeline of New York, in which the city is constantly under threat of being overrun by demons were it not for the efforts of "Magistocrats", high-society magicians. The show satirizes the rich and famous, and its dry, sardonic jokes tackle wealth and status. This anime proved to be too unusual for a broad audience, however, and it was canceled after only 7 episodes.

Hoping to capitalize on the popularity of Joel McHale's show "The Soup", which ran for 12 seasons, Netflix launched "The Joel McHale Show with Joel McHale". It had all the elements that made "The Soup" so popular, with McHale exploring pop and internet culture with humor and sarcasm. The show wasn't Netflix's only chat-style show to got canceled. Michelle Wolf's "The Break" and Chelsea Handler's "Chelsea" also suffered a similar fate, prompting some to speculate that audiences simply weren't looking to Netflix for chat-style shows.

Starring Tiffany Haddish and Ali Wong, this animated show followed two bird-women, a toucan and a songbird, living together in an apartment. When it launched, the show was claimed as one of the best new TV series of 2019. It earned a 100% critics score on Rotten Tomatoes. Sadly, it didn't have enough viewers to keep it on the air.

"Greg the Bunny" is a cult classic that became mainstream. It started as a public access cable show called "Junktape". From there, it was turned into a series of shorts on the Independent Film Channel, after which Fox picked it up. Starring Seth Green and Eugene Levy, it was a spoof on children's shows, and featured a world where puppets where treated as real, albeit as second class citizens. Despite going through three incarnations, this much-loved show didn't survive its third. It did, however, inspire a spin-off called "Warren the Ape", which also only aired for a single season.

No list of single-season shows would be complete without "Freaks and Geeks." Featuring an astounding series of "before they were stars" stars, "Freaks and Geeks" had Linda Cardellini, James Franco, Seth Rogen, and Jason Segel, among others. Following a series of high school outcasts via a brother and sister and their respective cliques, "Freaks and Geeks" continues to be lauded. It's #11 on Rolling Stone's 100 Greatest TV Shows of All Time.

Not to be confused with "The Muppet Show" or "Muppets Tonight", "The Muppets" was the 2015 reboot of the show. This was a more grown-up version. Rather than being simply a variety show with skits, it followed the characters' lives in both a personal a professional setting. It still had that classic Muppet humor, though, as it was done as a mockumentary-style parody.

This Netflix show stars Tony Danza and Josh Groban as a father/son cop team. Part comedy, part drama it was based on an Israeli series. Those who loved the show praised Danza's performance and its nostalgic feel. The show also offered a fresh perspective on cop shows of yesteryear, with a bit of satire thrown in for good measure.

Set in the Bronx in the 1970s, "The Get Down" shows the rise of hip hop and disco. The show was narrated by superstar rapper Nas. It was a hit with both audiences and critics, scoring an 81% and 91% on Rotten Tomatoes, respectively. Sadly, that love wasn't enough to keep it alive.

Another comedy-drama, "Bunheads" follows the world of ballet. It follows a ballerina-turned-Vegas-showgirl who moves to a Ojai, California and ends up teaching ballet. This show was universally loved by critics, and has the Rotten Tomatoes score to prove it, 100%. Its cancellation was a case of 'too much of a good thing.' Running on ABC, it was against bigger hits like "The Fosters" and "Pretty Little Liars", and its ratings didn't compare.

This was a sci-fi big concept show. A family from the 22nd century travels 85 million years into Earth's past to set up a colony to escape overcrowding and excessive pollution. Its executive producer was Stephen Spielberg. Not even a big name like that could save the show. Though it found some die-hard fans, it just couldn't find enough of them.

This was another case of a show with a big name that couldn't save it. "Alcatraz" was produced by J.J. Abrams, whose hits include "Lost" and "Alias". The show jumped between 1963 and modern day, and followed prisoners and guards who disappeared in the past and mysteriously reappeared in the present. Despite being awarded a 1st Critics' Choice Television Award, the show only lasted 13 episodes.

Following the success of "Parks and Recreation", Rob Lowe was looking for another comedy hit. In "The Grinder", Lowe played an actor who had played a lawyer on a long-running television series. When the show was canceled and he moved to his hometown, he's convinced that the show provided adequate training for him to be a real lawyer. He joins his brother, played by Fred Savage, in the family law firm. Despite the hilarious premise and critical acclaim, the show didn't find a big enough audience, and was canceled.

'Z: The Beginning of Everything'

This period drama is a fictionalized version of the life of F. Scott Fitzgerald. The show centers around his wife, Zelda Fitzgerald, played by Christina Ricca. It follows a time before the novelist became famous. As the two lived in the roaring 20s, it shows their life of parties and drinking, and the effect this lifestyle has on their marriage.

Starring Jason Isaacs, this fantasy police show had an interesting premise. Isaacs, a detective with the LAPD, is in a car accident and wakes up living in two realities. In one, his wife survived. In the other, his son survived. He's not sure which one is real.

If you think Jean-Claude van Damme is so intense he's practically a parody of himself, you're not the only one. This comedy show has van Damme playing himself, but with a twist: he's an undercover private agent. With a wink and a nod to the over-the-top action characters van Damme plays, the show was at once both homage and parody. Though loved by audiences, the show was not renewed.

The show was based on the book of the same name, which was based on real life events. In the 1960s, female employees at Newsweek brought a lawsuit against their employer. The show follows female staff at a publication called News of the Week, and how poorly they're treated vs. their male counterparts. After the show was canceled, Amazon boss Roy Price was fired under allegations he sexually harassed a female employee. This sparked speculation that the show might return; however, it never came back.

Sophia Amoruso is the founder of Nasty Gal, a women's fashion retailer. She wrote a book detailing her experiences, Girlboss. The show is based on the book. The show divided audiences, but those who loved it loved the strong female character at the helm.