Where Are They Now? The Cast of ‘Saved by the Bell’

Brad Ludwig
Where Are They Now? The Cast of ‘Saved by the Bell’ October 21, 2019Leave a comment 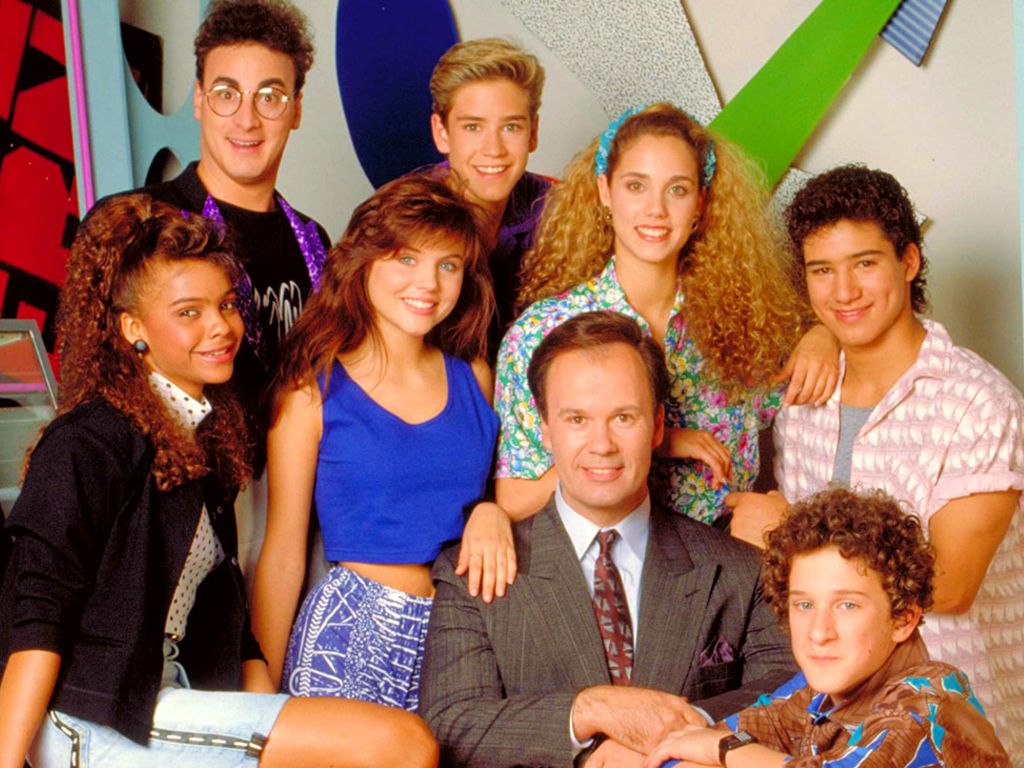 It may seem like just yesterday for ‘80s and ‘90s kids, but it has unbelievably been more than 25 years since Zack Morris and company last roamed the halls of Bayside High School on “Saved by the Bell.” NBC has announced a reboot of the classic teen sitcom to air on its new Peacock streaming service, which will hopefully bring the familiar antics to a whole new generation, but in the meantime, looking back at the original cast is sure to get the nostalgia flowing and make you feel old in the process.

Mark-Paul Gosselaar as Zack Morris was the definition of a ‘90s teen heartthrob, with his coiffed blonde hair, chiseled jawline, and mildly bad-boy attitude. Gosselaar was just 14 when he was cast in the “Saved by the Bell” predecessor show, “Good Morning Miss Bliss,” and he grew up over the next several years on both “Saved by the Bell” and “The College Years” spin-off.

Today, Gosselaar is barely recognizable from his “Saved by the Bell” days, having ditched the blonde locks for a more ruggedly handsome look. After prominent roles in “NYPD Blue” and the TNT legal comedy “Franklin & Bash” over the past twenty years, Gosselaar has more recently starred in Fox’s “The Passage” based on Justin Cronin’s thriller novel, and he now appears as Rainbow’s hippie dad in “Mixed-ish,” ABC’s “Black-ish” prequel series.

Mario Lopez and his sweet mullet joined the cast during the overhaul of “Good Morning Miss Bliss” and helped “Saved by the Bell” establish its own identify after the move from Disney to NBC. His audition for the role of athlete and military kid A.C. Slater impressed producers so much that they changed the character from his original conception as Italian-American, and Slater’s rivalry-turned-friendship with Zack became one of the show’s signature pairings.

Lopez has established a successful career as a TV host for shows like MTV’s “America’s Best Dance Crew,” the American version of “The X Factor,” and the celebrity news programs “Extra” and “Access Hollywood.” With his hosting duties have come a string of guest appearances as himself in movies and TV shows, as well as occasional roles in ABC Family holiday movies. Lopez is also one of the confirmed cast members returning for the “Saved by the Bell” revival.

Like Zack Morris, Dustin Diamond’s Screech was around from the very beginning of the “Good Morning Miss Bliss” days. Diamond won the part despite the fact that he was only eleven years old, and he continued to play Bayside’s resident geek for more than a decade, stretching into “The College Years” and even “Saved by the Bell: The New Class,” in which he played Mr. Belding’s assistant.

Diamond’s life and career since “Saved by the Bell” have been marked by one bizarre incident after another, including a 2006 sex tape, a villainous turn on “Celebrity Fit Club,” a salacious tell-all of questionable veracity about his time on “Saved by the Bell,” and multiple arrests for disorderly conduct. This September, Diamond was scheduled to face-off against Chris Morgan, a.k.a. the “Bagel Boss,” in a Celebrity Boxing match, but Morgan pulled out at the last minute.

Tiffani Thiessen was chosen over future "90210" star Jennie Garth to play cheerleader Kelly Kapowski, who soon began an on-again, off-again relationship with Zack Morris that lasted throughout the show’s run. Thiessen returned for “The College Years,” allowing Kelly and Zach to rekindle their romance, which culminated in an engagement and finally a marriage in the series finale TV movie “Wedding in Las Vegas.”

Thiessen went straight from “Saved by the Bell” to join Garth on “Beverly Hills, 90210” where she played a very different teen role as the emotionally troubled Valerie Malone. She later starred for six seasons as Agent Burke’s wife Elizabeth in USA Network’s “White Collar” and hosted her own show on the Cooking Channel. Her most recent role is the mother of a teenager coping with cancer on the Netflix series “Alexa & Katie,” which was renewed for a third season in 2019.

Elizabeth Berkley also auditioned for the role of Kelly Kapowski, but she was instead cast as Jessie Spano, the overachieving class president who served as an inspiration for young girls with her philosophy of female empowerment, and whose unlikely relationship with Slater was a font of odd couple entertainment. Berkley was absent from several Season 4 episodes, as well as “The College Years,” since Jessie attended Columbia instead of Cal U like many of her Bayside friends, but she did return for the “Wedding in Las Vegas” series finale special.

Berkley’s career took a bit of a hit after she starred in the controversial 1995 film “Showgirls,” but she recovered and went on to appear in a string of movies and TV shows, including a notable recurring role as Horatio Caine’s ex on “CSI: Miami.” She also competed on “Dancing with the Stars” in 2013, dropped by for an episode of Tiffani Thiessen’s Cooking Channel show, and most recently guested in an episode of “New Girl” in 2016. Like Mario Lopez, Berkley is also slated to star in the new “Saved by the Bell” revival.

The last of the teen cast to carry over from “Good Morning Miss Bliss,” Lark Voorhies played the fashion forward Lisa Turtle. Not as lucky in love as many of her classmates, Lisa spent much of her time rejecting Screech, often not so gently, but as a friend she was a core component of the Bayside gang. After her role in the main series concluded, Voorhies made guest appearances on the various “Saved by the Bell” spin-offs.

Soon after “Saved by the Bell” Voorhies recurred on the soap operas “Days of Our Lives” and “The Bold and the Beautiful,” and she later starred as the love interest for Method Man’s character in the 2001 stoner cult classic “How High.” Her recent acting roles are few and far between, and she’s been through some struggles in her personal life, but she’s still spreading positivity through Twitter and Instagram, and a retweet of the “Saved by the Bell” reboot announcement has us hopeful that she might make an appearance.

As Bayside’s principal Richard Belding, Dennis Haskins appeared more than any other cast member in all of the various iterations of “Saved by the Bell,” and with him came his constant refrain: “Hey, hey, hey, hey, what is going on here?” Haskins’s adult presence was a reliable foil for the mostly teen cast, especially Zack Morris, whose antics both annoyed and impressed Belding to no end.

Haskins has revived his role as Mr. Belding a few times in recent years, including in a 2012 episode of the Nickelodeon sitcom “Victorious,” a 2015 “Saved by the Bell” reunion sketch on the “The Tonight Show with Jimmy Fallon,” and the music video for Khalid’s hit “Young Dumb & Broke.” There’s been no word yet whether he’s taking part in the revival, but it’s safe to say that it won’t truly be “Saved by the Bell” without Mr. Belding.

The wild-haired Ed Alonzo appeared throughout the first season of “Saved by the Bell” as the owner and namesake of The Max café, a regular gathering place for the Bayside crew. A magician in real life, Alonzo had plenty of chances to show off his tricks on the show, but his character fell by the wayside starting in Season 2.

Alonzo continues to work as a magician, often demonstrating his tricks on the CW’s “Masters of Illusion” and appearing in magic-themed episodes of “Modern Family” and “How I Met Your Mother.” In 2016, he also helped recreate some “Saved by the Bell” magic at a Chicago pop-up restaurant called “Saved by the Max,” based on his restaurant from the show.

Leanna Creel was a late addition to the cast, filling in to provide a female presence in Season 4 episodes when Tiffani Thiessen and Elizabeth Berkley were unavailable. Her character Tori never got much of an arc of her own and didn’t appear in the graduation episode, but her leather jacket and biker girl attitude definitely made her stand out anyway.

Creel’s most recent acting credit was a minor role in the 2000 movie “The Cell,” also starring Jennifer Lopez and Vince Vaughan. She and her wife, Rinat Greenberg, now focus on food and lifestyle photography and video production for their co-owned Creel Studio company.

Aside from the main cast, no Bayside student appeared in more “Saved by the Bell” episodes than Troy Fromin’s Ox. Mostly a one-note meathead jock who played football with Slater, Ox was still good for a few laughs whenever he showed up.

Fromin stepped away from acting at the end of the ‘90s, but he’s returned in the last five years with bit parts as a patient with a foot abscess on “Grey’s Anatomy” and a handyman on Nickelodeon’s “The Thundermans,” as well as roles in some low budget horror films.

After winning Miss Teen USA in 1990, Bridgette Wilson joined “Saved by the Bell” for five episodes in Season 4 as Ginger, a new love interest for Zack Morris who leaned maybe a little too far into the dumb blonde stereotype.

She didn’t have much of a chance to make a mark on “Saved by the Bell,” but Wilson did have a fairly successful movie career in the late ‘90s and early ‘00s, with prominent roles in “Billy Madison,” “I Know What You Did Last Summer,” and “The Wedding Planner.” She hasn’t acted since 2008, but she continues to raise her family and enjoys watching tennis matches with husband Pete Sampras.

Ernie Sabella was a regular presence in Season 3 as Leon Carosi, the boisterous boss of Zack Morris and friends at their summer job at Malibu Sands Resort. In Leon, Zack found another adult besides Mr. Belding to antagonize, though he had to change his behavior when he developed feelings for Leon’s daughter, Stacey.

In 1994, a few years after his stint on “Saved by the Bell,” Sabella landed the role which would bring him the most fame: the voice of Pumbaa in Disney’s “The Lion King.” Since then he has reprised the role in a vast array of sequels, TV shows, and video games, most recently as a frequent guest voice on “The Lion Guard.”

Stacey Carosi was played by a young Leah Remini, who with her no-nonsense, East Coast personality gave Gosselaar’s Zack Morris a different kind of love interest to play against. Alas, like most summer romances, Stacey’s and Zack’s was short-lived, but her time on the show and the Malibu Sands episodes will always stand out as a memorable change of pace.

It’s funny to look back at Leah Remini as a teen on “Saved by the Bell” since her true rise to fame came several years later playing opposite Kevin James on “King of Queens.” She recently joined James again in the CBS sitcom “Kevin Can Wait,” and she has also become known for her outspoken opposition to the Church of Scientology through a 2015 book and an ongoing documentary series on A&E, after she herself left the church in 2013.