Foods Americans Like but That Other Countries Think Are Insane 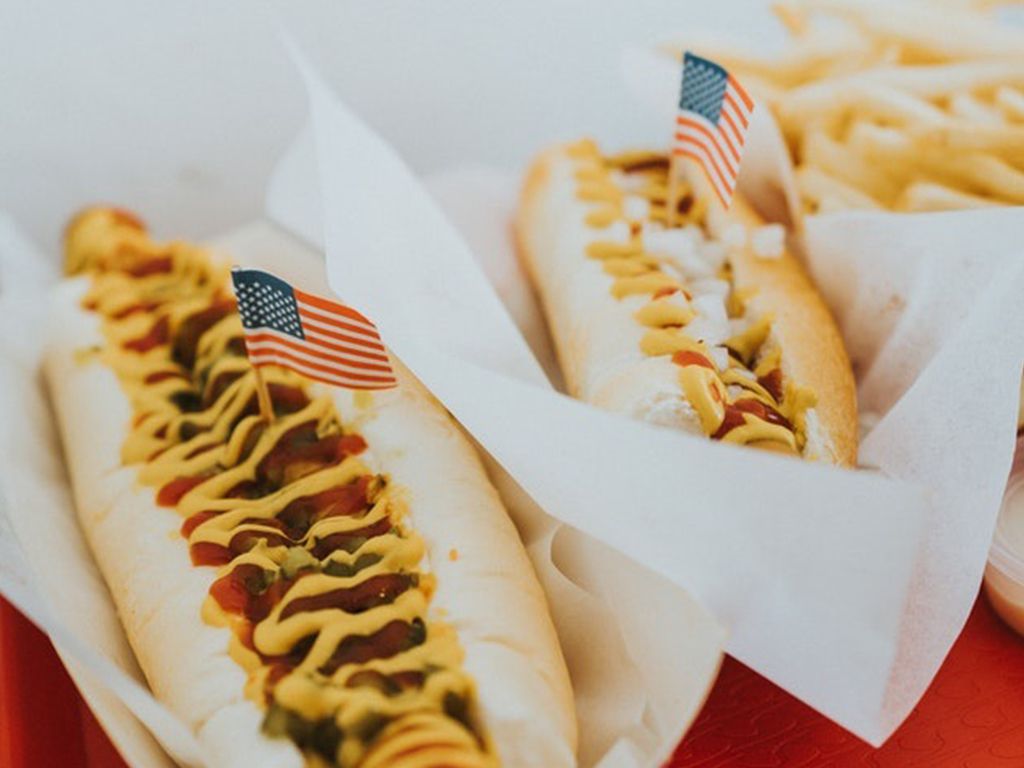 A lot of dishes typical to American life are way too much, or in some cases just really confusing, for foreigners. So here are some strange meals that you'd have to be American to appreciate...

We’re all gung-ho for foods that are sweet and sour or sweet and salty. But this American Thanksgiving staple combining already-sweet sweet potatoes with melted marshmallows is like a recipe for a diabetic coma for anyone who wasn't introduced to it as a kid.

Fried Chicken With Waffles and Syrup

Waffles and syrup for breakfast? Sure. Fried chicken for lunch? Even better. But Americans have a "best of both worlds" kind of mentality so they get to eat both. But as insane as this dish might sound, you shouldn’t knock it till you’ve tried it.

To Americans, this might look like biscuits and gravy, which sounds delicious and perfect for the cooler months. But to everyone else, it just looks like some sort of weird goo in a pan and a couple of bland salty muffins.

Americans eat Spam cold, thin-sliced, fried until crispy, or even Spam with fried eggs. But a lot of people in the world just don’t get why they love their canned pork so much. It probably has a lot to do with it being so affordable and so easy to prepare.

You cut cheese cubes. You spread cream cheese. But in America, you can also spray it out of an aerosol can and create all sorts of weird designs on a bread slice or cracker. It’s fun for kids but you can bet a couple of adults are cheese doodling too. Which isn't to be confused with eating Cheez Doodles. That's something else...

Americans, particularly Southerners, love their corn grits for breakfast. But to the average foreigner, a bowl of grits looks like a bunch of slop or puke. Fortunately, some people make it thicker till it looks like porridge. But still. A hard pass if you've never seen this dish before.

How is deep-fried ice cream even possible? Here's how it works: To keep it from melting, they dip the scoops in some eggs and then coat it with bread crumbs. But it has to be done three times before putting it in the oil because the cream destroys the oil just like it destroys arteries.

We don’t even know how someone would even begin to fry butter without it mixing in with all the oil. But it’s probably done the same way as the deep-fried ice cream. So make sure you order that extra heart attack to go.

Let's not beat around the bush. Americans love to deep-fry anything they get their hands on, and that includes Cadbury Creme Eggs, bubblegum, Kool-Aid, and even French-fry-coated hot dogs. There’s nothing Americans won’t say no to when deep frying.

Americans do everything bigger, even foods like pizza. Now, most countries consider a large pizza to be the size of a frying pan. But Americans take it to the next cheesy level by serving pizza that's as big as a whole freaking table!

Ice cream and soda are delicious on their own. But Americans came up with a thing where they put a scoop or two of ice cream inside a mug full of soda to create a float. It’s weird but really tasty and the bubbles on top are actually kind of nice and fizzy. Weird? Sure. Surprisingly tasty? Maybe.

Frito Pie in a Bag

This dish is a nod to Tex-Mex food and contains Frito corn chips at the bottom and some chili stew thrown on top along with some cheese and maybe a couple of cut onions. But get this. The Frito bag itself is at the bottom of this hot mess.

Americans love to indulge. So, they’re probably not fazed that the burger buns are substituted with donuts. But all foreigners feel is icky at the thought of touching those glazed donuts every time they go for a bite of their burger.

Americans might love olive loaf but foreigners are a bit picky when it comes to charcuterie. It’s like a marriage between bologna slices and green olives and the flavor is usually rancid and salty for some people to stomach. Plus, it’s a nightmare for anyone suffering from trypophobia.

Ambrosia is a recipe for disaster if you’re not American. The repugnant-looking dish contains pineapple, orange slices, and coconut all mixed in with a bunch of miniature marshmallows. Some people even mix Jell-O, Cool Whip and cream cheese to it because why not?

They come in all sorts of flavor and most foreigners would say that the fruit filling inside just doesn’t taste right. On top of that, they’ve got a weird frosting with candy sprinkles on top which is perfect...if you're a 10-year-old. On the plus side, you can just pop them in the toaster and voila! Easy breakfast.

This particular casserole contains ground beef, mushroom soup, chicken soup, and evaporated milk. But as you might have noticed, it also comes with a layering of tater tots which sounds delicious, but you might gawk at it if you’re non-American.

We’ve heard of honey baked ham, but some people have never considered dipping fried bacon into chocolate and then sprinkling them with some salt. Is it a dish or a dessert? Foreigners just don’t know.

Lobster poutine comes with lobster, cheese curds and gravy on top of French fries. While some might find it tasty, it looks visually nauseating to outsiders. In fact, the lobster topping looks like barf on fries.

We get how gross this might look. But it was Elvis Presley's favorite. Of course, he might have suffered from a severe case of the munchies because of his substance abuse issues. But who cares? If the king of rock and roll liked it then the world should try it too, right?

We love pizza. We love burgers. But this one will have you questioning everything. It’s kind of like a Hot Pocket with a burger inside. But burgers weren't meant to be eaten like that. Do yourself a favor. Eat a pizza slice and then order a burger if this dish is making our arteries cry with fear.

When you think parfait, your brain automatically goes to sweet dessert. But this parfait has seasoned smoked pulled pork, layered in a cup with mashed potatoes and tangy BBQ sauce and some corn. It might taste good but it’s not what you’d expect from a parfait.

How would you like a pickle that’s been brined with Kool-Aid mix? It sounds awful, doesn’t it? The thought of mixing something fruity with the tangy sour taste of a pickle can make anyone's stomach turn.

Some Americans love grabbing one of these when they go to the gas station to pay for their gas. But foreigners don’t like the taste or texture of this meaty treat that some find equivalent to the sole of Ganhdi’s sandal.

This dish contains sausages, potatoes and cabbages all stuffed inside a pig's stomach lining. Most Americans would even agree that it doesn’t sound very appetizing. Maybe it helps to know that the organ is cleaned properly first, right? Right? Yeah, nope.