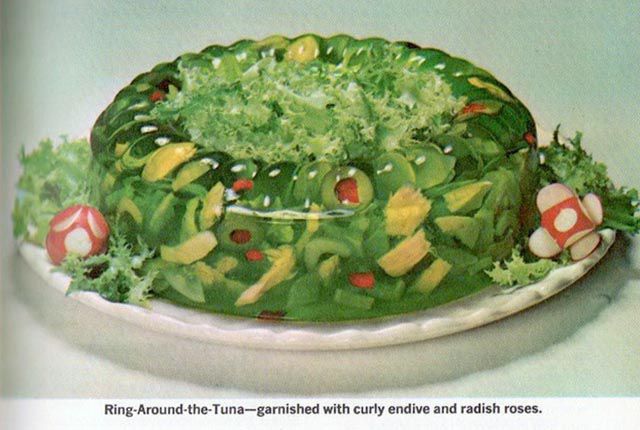 Have you ever looked through vintage cookbooks to check out the disgusting recipes our parents and grandparents used to eat when they were kids? Some of them were truly horrible. Maybe no one back then had tastebuds, because that would be the only excuse for some of these combinations. There's so much mayonnaise, tuna and Jell-O here, you guys. And often, horrifyingly, mixed with each other. So get your gag reflex under control and take a look at these disgusting recipes from old cookbooks.

The call it Perfection Salad. Please tell me what about a sickly brown Jell-O filled with lettuce and a ton of random shredded ingredients is so perfect. It looks very gross and giving it a fancy name really doesn't make it any better at all.

Almonds In a Haystack

What do you get when you combine cubes of ham with a ton of Miracle Whip and sliced almonds? This monstrosity. It is supposed to be some sort of dip, but tbh it looks like cat food covered in mayo. We will pass on trying this appetizer, thank you very much.

This one doesn't sounds completely awful, but it doesn't look appealing, either. Potato salad is delicious. Potato salad in a pie pan covered in a thick layer of mayo and garnished with fresh cherries is just very weird. Hellman's didn't bring out the best with this one.

Again, this one doesn't sound totally horrible, but why is it necessary? Just buy normal candles. Why do you have to make your own strange edible candles out of mayo, gelatin and cranberry sauce? Rest assured, regular cranberry sauce is just fine on its own.

What is with old recipes and their love of tuna, Jell-O and mayo? If the title of this one, Tuna Jell-O Pie, wasn't disturbing enough, the suspicious green color should turn you right off. And iced tea just seems like an odd choice to accompany this.

The Super Salad Load is all sorts of nope. Cream of tomato soup with pineapple, ginger cookies, mint and coffee... what kind of black magic is this? The ad says it will be ready when company comes, but company definitely won't be ready for dinner.

Putting On The Dog

This is basically a recipe about how to make a hot dog look fancy so you can throw it on a plate with anything else and call it a meal. Sorry, but a hot dog doesn't make a decent meal, no matter how jazzy it looks.

Ring-Around-The-Tuna is a Jell-O mold filled with what looks like green olives and pineapple surrounding a tuna fish salad. Why is the tuna fish salad green? The world may never know, and that is probably for the best. How are you even supposed to eat this?

Blue cheese alone isn't bad enough, now we have to turn it into a frothy science experiment of a mousse. It looks like this is supposed to be paired with cucumbers and wine at a classy dinner party. It is likely best enjoyed very wasted.

Ham Loaf Superb is another example of something that might not be terrible, but the presentation is a bit frightening. It appears to basically be a meatloaf, but presumably made of ham. It is sliced and filled with cheese then served on peas and, for reasons unknown, celery.

Deviled eggs are great. Deviled lettuce sounds questionable at best, disgusting at worst. Ham, cream cheese and mayo are all fine on their own, but when mixed with pimento and stuffed into lettuce and covered in more mayo, that is where the line must be drawn.

Another example of two good things that need not be joined, Tuna Macaroni Cheese Loaf just sounds excessive. Why not just enjoy macaroni and cheese on its own, or a nice plain tuna sandwich? The crusty top of this loaf is the unappealing cherry on top.

Olives, shredded unidentifiable objects and Jell-O are a bad enough combination. Add a bizarre fish-shaped mold and we have a very confusing recipe. Is that rice on the bottom layer? Is there even fish involved or is the marine-inspired shape just to look really fancy?

On first glance, this looks okay. Who doesn't like nice glazed holiday ham? But read the ingredients and you will quickly realize that the can came out of a ham. Mustard, pineapple and honey really doesn't sound like a good mix, especially when spread on canned meat.

A crust made of meat filled with a strange liquid full of beige objects and topped with floating eggs... sounds about par for the course with these old recipes. Honestly, the potted plants full of soil sitting next to the pan look better than the contents inside the pan.

Hellman's Frosty Slaw Man Salad is basically a snowman made of cottage cheese Jell-O. It is actually kind of cute as a centerpiece, but who in their right mind would eat this? It can't even have much flavor – mayo, cottage cheese and cabbage are pretty bland.

More tuna, more Jell-O, more mayo, but this time, we get snazzy with the addition of some A1 steak sauce. Take a slice of this creepy pink fish-shaped meal and then throw up, probably. Notice the side dish of even more mayo to slather on top.

Cauliflower is a trend in the culinary world right now, but it looks like vintage cookbooks had us beat. This meatloaf probably saved money since the entire center isn't even meat, but the texture must be really weird. It is basically a whole cauliflower topped with a beef hat.

It is safe to say that most of us would much rather find coal in our stockings than find this Oscar Mayer meat tree on Christmas morning. To be fair, it would probably keep kids busy at a holiday party, but no one actually wants to eat meat that has been touched by everyone.

This Frozen Fruitcake Salad looks okay at first glance, but it is still weird. Combine a lot of crushed and chopped fruits including bananas, pineapple and nuts with Jell-O and then freeze it. So it is not only a creamy fruity mess, it is also frozen solid.

When you are sick of eating so much mayo and want to go low-cal, switch to mixing mustard with all of your Jell-O recipes instead. Mustard Salad Molds have chopped veggies mixed with mustard and molded into sad little flowers. They're not served with anything, just eat them alone.

Hot Creamed Ham, Oysters and Mushrooms is the hot liquid dip-like soupy creation you never asked for and never wanted. If you can't decide between ham or seafood, have both. It is presumably eaten as a soup and ladeled out with a large serving spoon.

Can't decide between SPAM, sweet potatoes and peaches? You don't need to with the Fiesta Peach-SPAM Loaf. Some of it is baked with mustard; canned peaches are spread around the bottom of the plate. None of it makes sense, but at this point, nothing makes sense anyway.

When you want a refreshing tropical seafood salad, look no further than Tuna Fruit Salad. It's got tuna, it's got pineapple and it's got shrimp. If you look closely, it also appears to have sliced bananas because, at this point, why would it not have sliced bananas?

Cottage Cheese Sauce basically looks like regular cottage cheese. It looks like it is served with olives and some sort of lunch meat, which sounds like a delightfully horrendous combination. Serve it with wine to be classy, or maybe just to get drunk enough to forget it.

The name Melon Mousse actually sounds kind of nice: light, fruity, sweet, refreshing for the summer. Once you take a look at the photo, however, you will quickly realize it is none of those things. It is a beige blog that looks slick and moist.

Piquant Herring Salad is a creamy mixture of fish with the skin still on, mayo and apple slices. Nothing about it sounds appetizing. Fish and apples can't be a tasty combo, no matter how much mayo is whipped into it. And we know there is a lot of mayo whipped into it.

Sauerkraut with Bacon and Sausages

Sauerkraut with Bacon and Sausage sounds basic enough. It may even be something you would voluntarily eat. One look at the photo, however, will have you changing your mind and shaking your head. Everything looks very wet. The sausages are slimy and there is water pooling under the potatoes.

The Tuna Eggplant Poseidon is an aptly named dish. The Poseidon was a disaster of a ship and this definitely looks like a disaster of a meal. Chopped tuna and a reddish spice that might be paprika is baked into an eggplant boat. Horror ensues.