The Bizarre Untold History of Mountain Dew (And Other Popular Sodas) 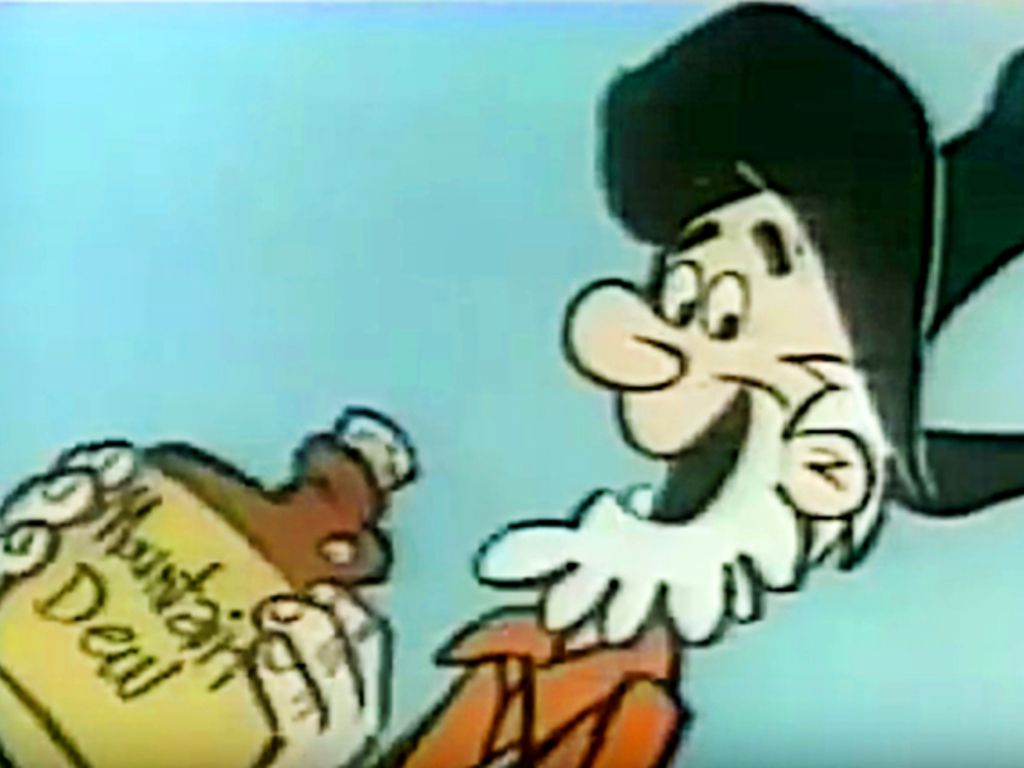 First invented in 1940, Mountain Dew has grown to become one of the most popular soda brands in the world. Since its debut, the citrus soft drink has expanded its reach with unique flavors and unusual Super Bowl ads. Below is a list of some surprising facts you didn't know about Mountain Dew along with some other popular soda brands.

Originally a Mixer for Bourbon

Ally and Barney Hartman originally designed Mountain Dew to accompany their favorite alcoholic beverage, Old Taylor bourbon. Bottling small amounts of their lemon-lime flavored soda for their own use, dubbing it "Personal SetUp," the substance received its new name as a reference to moonshine.

'Mountain Dew' is a Nickname for Moonshine

During a 1946 soda convention, the brothers launched their creation as a joke product which featured a depiction of a "rifle-toting hillbilly" and the catchphrase "It'll tickle yore innards." Much to their surprise, Charlie Gordon-the owner of Tri-City Beverage- expressed interest in bottling the soda, eventually earning the rights in 1954. In 1951, the soda lined market shelves but struggled to take off until 1957 when the Hartmans decided to sell their brand to Tip Corporation.

The Hartmans' original recipe for the moonshine mix tasted very similar to today's Sprite but when transfered to Tri-City Beverage, it took on a new flavor in an attempt to rival to the increasingly popular Sun Drop. Taking on a citrus-lemon flavor, the recipe now includes "concentrated orange juice" among its ingredients.

Only three non-coffee beverages rival the amount of caffeine in one 12 fl oz can of Mountain Dew which already has a whopping 55 milligrams. In order of most to least, Red Bull contains 80mg with Jolt coming in close second with 71.2 mg. Pepsi One comes in third with 55.5mg. Originally Mountain Dew contained more caffeine but during production, it would crystalize to the point of forming into slivers of ice that threatened to burst through the bottles.

Not only does Mountain Dew contain a lot of caffeine, it also boasts a high sugar content. A 20 ounce bottle was measured out by Spoon University who discovered the soda contained 77 grams of sugar (roughly the equivalent of consuming eight and a half sugar cookies in one sitting). In terms of actual weight, Harvard School of Public Health determined the 77 grams would come out to 18 teaspoons of pure sugar. A 12 ounce bottle of Mountain Dew contains 46 grams of sugar.

One conspiracy theory that surrounds Mountain Dew is that one of its ingredients, Yellow #5 (aka Tartrazine) lowers sperm count. To this day, there has been no scientific proof regarding the effects of the soda on young men and their ability to procreate. Some studies however have shown the ingredient can increase ADHD-like symptoms in those with and without the disorder although the likelihood is significantly low.

One Ingredient is Banned in 100 Countries

One of the main ingredients in Mountain Dew is banned in 100 countries. Brominated vegetable oil (BVO), which "acts as a binding agent" is used to keep two liquids together and is found in most soda products. While the chemical may be extremely convienient for the food industry, it raises many concerns for the health department. Elevated levels of BVO have been found to lead to thyroid issues, birth defects, schizophrenia, and cancer.

According to NPR, the popular soda brand is causing a health-scare in Appalachia known as the "Mountain Dew Mouth" phenomenon. A favorite beverage of its residents, the people of Appalachia are suffering from rotted teeth due to their extreme consumption of the sugary drink. Certain policies have been suggested including restricting the purchase of the specific brand (and other sugary sodas) using foot stamps and educating youth regarding the imporatance of dental hygiene.

Was a Dead Mouse Found in a Can?

In 2012, a man tried to sue PepsiCo after he claimed he found a dead mouse inside his can of Mountain Dew. Defending themselves against the lawsuit, PepsiCo stated the rodent would have disintegrated during the timespan of the soda being placed on and self and it being purchased. The Smoking Gun reported a representative from the company claimed "after 30 days exposure... the mouse will have been transformed into a 'jelly-like' substance." The case later revealed the mouse allegedly found inside the can hadn't been born during the production time of the particular can of soda and "was already dead" when it was found submerged in the substance.

In April 2019, Mountain Dew released a special flavor variant exclusive to Japan called "Violet." An image (above) of the can design for the purple-colored, grape-flavored soda was "leaked" via Reddit on April 14. It's unknown whether the product has a limited release date. Other Japan-exclusive flavors are "Aurora" (1986- strawberry), "Golden Lime" (1986- lime) and "Dry Ginger" (1990-unknown / ginger ale).

Mountain Dew made two attempts to delve into the food world. In 2015, Buffalo Wild Wings introduced the "Mountain Dew Wings" which were described as "throat-burning with a weird artificial lime-y flavor." Coated in a "Zesty Citrus Sauce," the wings were flavored with lemongrass, red peppers, ginger and soy sauce. The year before that, Japan created limited-edition Mountain Dew flavored Cheetos which featured a "sweet lemon-lime" flavor.

A Contest to Design Labels

In 2007, Mountain Dew partnered with Complex Media to create "Green Label." The online magazine featured sports, art and music content and later became the soda's promotional line featuring original artwork on aluminum bottles. In 2010, a contest called "Green Label Art: Shop Series" had 35 independent skateboard store owners partner with local artists to create pieces for the Mountain Dew cans. In October of that year, it was announced Street Science Skate Shop from Tracy, California won the contest, having their work featured in 2011.

For diehard fans of Mountain Dew, you can purchase a scented candle inspired by the soda. 716 Candle Co. offers a 100% soy wax candle that's been hand-poured into a recycled Mountain Dew can. It also has a 40-hour burn time and is available in Diet Mountain Dew.

In February 2016, Mountain Dew released an ad that contained what's still considered by some to be "the most terrifying mascot of all time." PuppyMonkeyBaby - a hybrid of a pug face, monkey body and tail, and dancing baby legs - was created for SuperBowl 50 and resulted in 2.2 million views and 300,000 social media interactions.

Pepsi's inventor was a drug store owner named Caleb Davis Bradham who referred to the beverage as "Brad's Drink." The recipe for the soda involved sugar, water, caramel, lemon oil, nutmeg, and kola nuts among other ingredients and was later renamed Pepsi-Cola because Bradham believed his concotion prevented indegestion aka "dyspepsia."

For some unknown reason, a theory has persisted that one of the ingredients in Dr. Pepper is prune juice. The belief has persisted since 1930 and believed to have originated through a rumor started by a competitor's deliveryman in an attempt to stop store owners from stocking their shelves with the soda. Prune juice is often associated with side effects like constipation and bloating which would be detrimental to a soda brand's rising popularity. Despite the somewhat convincing nature of the theory, the owners of Dr. Pepper have dispelled the rumor by clearly stating their beverage doesn't contain prune juice.

7Up Contained Lithium Until it Was Banned

Originally, 7Up went by a much wordier, less exciting name. Labeled "Bib-Label Lithiated Lemon-Lime Soda," the beverage contained small amounts of lithium citrate which at the time was highly praised for its mood-enhancing qualities. It was later removed from the drink's recipe in 1940 when the government banned the use of lithium. Now, the drug is more commonly used for medicinal purposes such as easing depression and treating bipolar disorder.

Sunkist Had More Caffeine Than Two Cups of Coffee

September 4, 2010 will go down in history as one of the worst blunders Sunkist ever made. Originally containing 41 milligrams of caffeine, the soda lowered the content to 19 milligrams. During bottling, the soda was accidentally macro-dosed with 283 milligrams of caffeine, roughly the equivalent of 2 Red Bulls (or two and a half cups of coffee). Consumers of the tainted product reported dizziness, nausea and in extreme cases, the need for hospitalization.

Sofia Vergara's First Acting Role Was in a Pepsi Commercial

While many recognize her from her role on "Modern Family," some may not know one of Sofia Vergara's first acting credits was an appearance in a Pepsi commercial. In 1980, the then 17 year-old actress starred in the promotional ad as a beautiful beachgoer tempted by the thirst-quenching drink. The hot sand proving too much for her bare feet, she uses items from her purse to guide her way until she is forced to use her own clothing as a barrier between her and the sun-soaked surface. In 2011, the actress agreed to be the company's spokesperson for Diet Pepsi.

Pepsi Had its Own TV Show

During the mid-1990s, the Pepsi brand's Japanese branch partnered with Canadian artist Travis Charest to create a television mascot for the soda which resulted in a faceless superhero called "Pepsiman" whose mission was to deliver the delicious beverage to those in need. A female counterpart- "Pepsiwoman"- made her debut during the invention of Diet Pepsi Twist. In 1999, a Playstation video-game was created where the character would be forced to dodge obstacles during its journey to quench the thirst of its consumers.

Pepsi Promised to Bring Back the Dead

Living in the "Pepsi Generation" may have proved beneficial to some but led to a great deal of misunderstanding in the 1960s. Though never proven, a legend surrounding this particular soda brand states the "Come Alive" slogan was interpreted by Chinese consumers to have supernatural connotations and "promise the substance would reanimate dead ancestors." What's even more troubling about this rumored event is the company's "non-denial" of it all. To this day, Pepsi hasn't clarified the blunder or established whether the incident even occurred.

Coca-Cola Was Intended to Be Medicine

Invented in 1886, Coca-Cola was intended to be a "patent medicine" and did contain small traces of cocaine (legal at the time) which came in the form of an extract from the coca leaf which inspired the first half of the soda's name. The "cola" part came from the kola nuts where the beverage sourced all of its caffeine. Among the soda's "medicinal" qualities was the belief that it could cure headaches, end morphine addiction, and reverse impotence.

Coke Bottles Are Recognizable By Feel

In an attempt to compete with rival knock-off brands, advisors for Coke instructed its bottling partners to come up with a distinguishable design that could be "recognized by feel" when customers would search for a refreshing drink in the icebox. In 1916, a cocoa-bean inspired bottle was designed by a bottling plant in Indiana despite there being no actual cocoa in the soda itself.

Sprite is a Proven Hangover Cure

According to Huffpost, the best cure for a hangover is the refreshing taste of the popular lemon-lime soda drink Sprite. During a study conducted by Chinese researchers, they discovered Sprite is able to counteract the effects of acetaldehyde which is responsible for the feelings of nausea and headaches caused by excessive drinking.

In the 1990s, Sprite decided to head in an "urban" direction and explore hip-hop culture when it came to their advertisements. Their commercials began to feature up-and-coming as well as underground artists like LL Cool J, Missy Elliott, Nas, Fat Joe and Common and included amateur basketball players like Grant Hill. The soda brand continues to promote its "Obey Your Thirst" and "Wanna Sprite?" slogans with advertisements featuring NBA players like Lebron James and rappers such as Lil Yachty. In 2015, Sprite launched limited edition cans featuring inspiring lyrics from popular rappers such as Drake and The Notorious B.I.G who were chosen for "their reputation for being true to themselves."