Have You Tried the Best Local Foods in Each of These US States?

Greg Smith
Have You Tried the Best Local Foods in Each of These US States? November 8, 2018 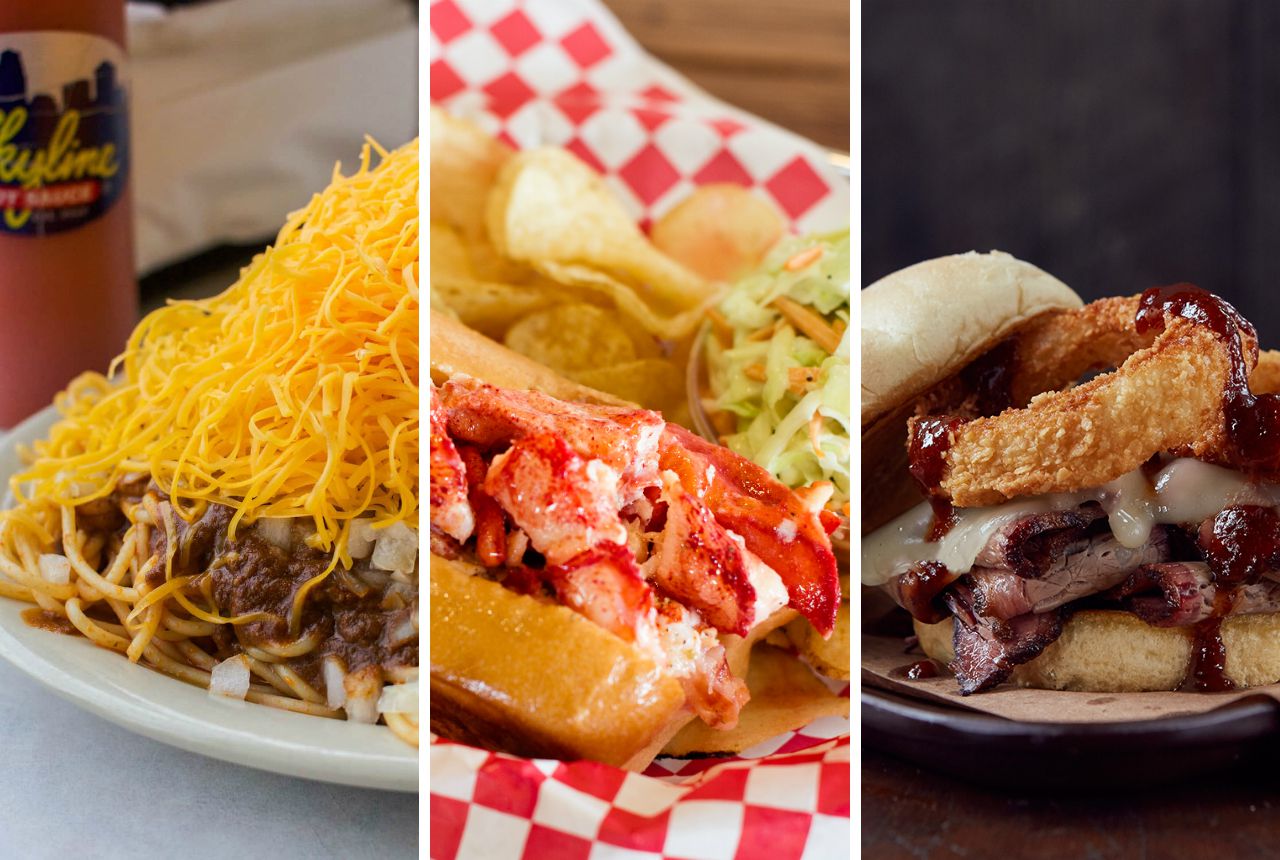 Fifty, nifty United States. And they all have their own unique styles of foods. But which ones are the best? While we can't get into every state of the union, we're here to highlight half of the best state foods for you to enjoy. Road trip, anyone?

Apple pie, good. Cheddar cheese, great. Apple pie with cheddar cheese... wait, what? Belive it or not, it's a New England delicacy, crossing sweetness and savoriness. Explore with the tartness and sharpness of both elements by mixing and matching types of apples and cheeses.

Originating in Germany, the bierock is essentially the Gogurt of meat pies. On the outside, a pillowy soft vestibule of bread. In the middle, juicy beef, carrots, onions, cabbage, and peas. Comfort food to go -- what a concept!

Did you know the Gardenburger, one of the premiere brands of veggie burgers, was invented in Oregon? Thus, if you're looking for a lean and green alternative to one of America's standby meals, head to its northwest quadrant for the best version possible.

Here's a fact: Fritos are so, so good. And when the culinary geniuses in New Mexico pour all matters of meat, spices, and sauces over those chips, they transcend any labels of quality you could throw at them. Plus, you can take the bag on the go!

So you've made some delicious, Kansas City-style ribs. But you've got a bunch of loose, even burnt ends from the meat, unfit for the actual dish. What do you do? You serve them on slices of white bread, slather them in sauce, and quickly become an inventor of utter deliciousness.

From the center of Scandinavia, to the center of America. Minnesota has become a hotspot for these packed up nuggets of joy. Bonus points: If you head to Minneapolis and get yourself an order, you won't even have to build a dresser after.

A staple of Cajun cuisine, jambalaya fuses Spanish and French influences for a tasty bite in the bayou. Rice, a meat of choice (or several), and a heaping helping of veggies and spices. The name came from a cook named Jean, who was told in French to "balayez", meaning "throw something together".

Let's be real: The phrase "breaded pork tenderloin sandwich" is enough to get you to travel to Indiana as fast as humanly possible. It's crispy, filling, and salivatingly delicious.

Thank goodness for Delaware, who gave us a way to celebrate Thanksgiving every day. The Bobbie is a sandwich comprised of turkey, cranberry sauce, and stuffing -- a feast between two pieces of bread. Grab it at Capriotti's, a perfect Delaware sandwich shop.

If you find yourself on the streets of Tuscon, craving a filling meal while exploring, grab yourself a Sonoran hot dog. It's wrapped in bacon and swaddled in condiments and Mexican spices. This fusion of tastes originated in "Hermosillo, the capital city of the Mexican state of Sonora, where the array of toppings is how vendors — sometimes called 'hotdogueros' — distinguish themselves."

At All Steak, a restaurant in Cullman, Alabama, foodies gather not for the titular steak, but for the dessert. Orange rolls are, to put it simply, "what if cinnamon rolls but orange?" They tend to be sweeter, more buttery, and lighter than their cinnamon cousins.

These West Virginia portable meals are kind of like gourmet Hot Pockets. But in some ways, they're even simpler. Yeasty bread, pepperoni, that's it. "The stromboli or the calzone might be cousins to the pepperoni roll," says West Virginian author Candace Nelson. "But the pepperoni roll is unique because of its strong ties to our culture".

Ever have ice cream? Sure. Now picture how good ice cream tastes, multiply it by about 8000, and you're within striking distance of how good Wisconsin's frozen custard tastes. The state takes the treat seriously -- in 1932, their Department of Agriculture required frozen custard as having 13% butterfat.

Trying to add, like, a lot more beef into your diet? Head to Salt Lake City and get yourself a pastrami burger. Because when you're in the land of Mormons, "choosing more than one thing" is kind of part of the culture. This joke is almost as unfair as the delicious taste of this burger.

Ohio has figured out the best way to improve chili: Dump it on a bunch of spaghetti! That's two of the titular "five ways". The other three? Onions, beans, and cheese. The sixth way they don't mention? Your taste buds' enjoyment.

Celine Dion, slot machines, and shrimp cocktails. What happens in Vegas should be shouted from a loudspeaker, because it's too delicious a combo to ignore! Nevada residents agree, eating over 22 million pounds of the stuff annually.

Prepare corn meal, pork, and spicy, spicy seasoning. Wrap in a corn shuck. If you're famous blues musician Robert Johnson, cut a song called "They're Red Hot". And then, enjoy yourself a Mississippi hot tamale.

We've got to give pasties a hand -- and not just because they're from a state shaped like a hand. Beyond cars and Motown, Michigan offers a compact vessel of meat, cheese, potatoes, and lots of other goodies. It's called the pasty, and it'll change your life.

When you live this close to the Atlantic Ocean, as the folks in Maine do, your cuisine follows aquatic suit. Thus, the lobster roll has become their signature dish, with the local crustaceans interacting beautifully with the Maine-baked bread. Water, water, everywhere, and every lobster roll to eat!

Cold cuts leaving you, well, cold? Head to Louisville and warm up with a Hot Brown. You've got yourself some turkey, bacon, and tomato on a slice of toast. The best part? It's all slathered in a cheesy Mornay sauce, which causes everything to, that's right, brown.

Who is the Z-Man, and why does he have such a decadent, delicious sandwich? The first answer: Mike Zarrick, a sports radio talk show host and regular customer of Joe's Kansas City Bar-B-Que. The second answer: The owner of Joe's Kansas City Bar-B-Que held a contest on Zarrick's show to name a new sandwich "which featured sliced smoked brisket, smoked provolone cheese, a couple of onion rings, a bit of barbecue sauce, all on top of a Kaiser roll." Zarrick -- who called himself Z-Man -- wound up being the namesake himself.

The malasada started in Portugal, moving its way to Hawaii in a 19th century immigration rush. And when native Hawaiians took one bite of the "yeast-leavened doughnut enriched with eggs, butter, and sometimes evaporated or fresh milk", they said, "We'll take it!" These fried and sugar-covered delicacies don't need filling, but if you can find one, absolutely go for it.

"Comfy" is the operative word of this Georgia dish. While some food critics use words like "messy" or "chaotic" when describing the mix of fried chicken with sausage gravy, we prefer chef Kevin Clark's description: "It’s just simple Southern food... It's comforting. It feels like you’re at your grandmother’s house."

What exactly is the "mission" of a Californian mission burrito? You might say, "it's not an actual 'mission', but just refers to the Mission District of San Francisco it originates from". But we would say, "that is true, but also its mission is to delight with its overstuffed bounty of amazing Mexican ingredients". And then we'd stop arguing and just eat.